Sixteen years after satirist Michael Moore explored the subject of gun violence in America with a mixture of humor, anger and sadness, his Bowling for Columbine is still funny, still bracing, and still true. The film is inducted into the Criterion Collection with a Blu-ray that's a respectable presentation if only a modest upgrade from DVD. Recommended.

Both the saddest and scariest part about watching Michael Moore's Oscar-winning activist documentary Bowling for Columbine a decade and a half after it debuted is the fact that absolutely nothing has changed in the meantime. School shootings and other gun-related mass murders still occur on American soil with distressing frequency, and nothing meaningful has been accomplished to stop that trend or even slow it down. Sandy Hook. Virginia Tech. Pulse nightclub. Las Vegas Village. Parkland. Merely saying the names of these locations will evoke the tragedies that happened at them. After each one, in which children and other innocents are senselessly slaughtered en masse, weak-willed politicians offer their token "thoughts and prayers," then bicker amongst each other about their hardline ideologies for a few weeks, hoping to stall long enough for the public uproar to die down… until the next one, after which the cycle repeats. And repeats. And repeats.

Although he has fallen from prominence and perhaps relevance in recent years, Michael Moore in his prime was the rarest of breeds, a documentarian turned pop culture icon. Through his outstanding debut feature Roger & Me and his brilliant sketch comedy/newsmagazine program TV Nation, Moore proved himself to be a wicked satirist and a good old-fashioned muckraker, unashamed of slinging dirt without fear of offending an apathetic public or being persecuted by political extremists. At his best, he pointed his camera at a target and went after it with the tenacity of a bulldog, never letting up until he had thoroughly ridiculed and humiliated his subject into defeat. For this, he was beloved by critics and demonized by Right-wing talk radio (and the burgeoning Fox News) as an enemy of all things Godly and American.

After 12 students and one teacher were murdered and another 21 people wounded at the Columbine High School massacre, Moore turned his cameras away from his usual targets (politicians and white collar criminals) and decided to try a different approach. Using his skills as a satirist, he toured the country asking why Americans are so obsessed with guns, what makes the United States as a society such a violent culture, and how do other nations around the world with histories even bloodier than our own manage to avoid this predicament? These are serious questions, but Moore explores them with his trademark sly humor, mercilessly making fun of bigots, nutcases, and corporate America whenever the opportunity arises. He didn't actually expect to find any answers, and frankly he doesn't, but he knows a good hot-button topic when he sees one and also knows how to milk it for some great material. 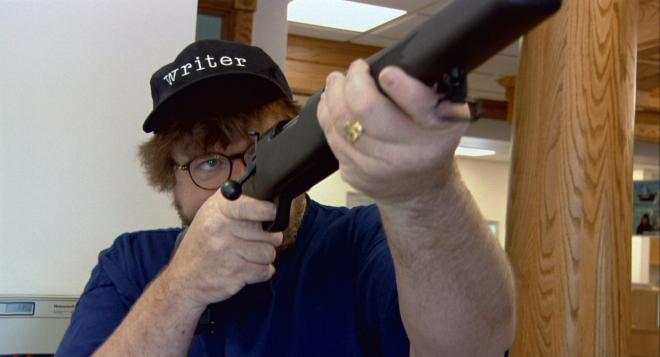 Bowling for Columbine was a sensation upon its release, taking a major prize at the Cannes Film Festival, becoming the highest-grossing theatrical documentary up to that time, and eventually walking home with the Academy Award for Best Documentary. For the latter, Moore took the stage to both a standing ovation and vehement booing from various segments of the audience – which was undoubtedly exactly the reaction the mischievous rabble-rouser wanted.

In the movie's aftermath, a cottage industry of detractors sprung up, decrying Moore as a big fat evil liar and (worse!) a socialist. Chief among their complaints was the film's climactic interview with screen icon Charlton Heston, who was then president of the National Rifle Association. Moore aggressively questions Heston on camera about his own and his organization's callous behavior in the wake of the Columbine tragedy, even asking if he'd issue a public apology. Heston, looking frail and confused, walks out without answering. How could Michael Moore be such an insensitive monster, his detractors asked, to treat a poor, senile old man suffering from Alzheimer's Disease in such a way? Has he no decency?

This argument has two major flaws: 1) Charlton Heston did not publicly reveal that he was suffering from Alzheimer's until August of 2002, three months after the completed film screened at Cannes, and therefore Moore could not have known about it at the time of the interview. 2) Illness or no, Heston was still serving as president of the NRA at that time and would for another year. If he was cognitively impaired to the point that he was incapable of handling himself in an interview, then he had no business continuing to act in a leadership role and directing policy for such a powerful and influential organization. 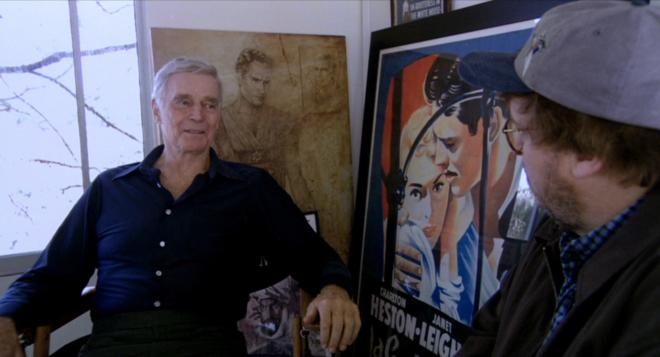 Truth be told, Bowling for Columbine is not Moore's best film. (That's still his first, Roger & Me.) Approaching such a broad topic, the movie lacks a clear target for Moore's satire and often comes across as unfocused. It runs at least half an hour too long. For a long stretch in the middle, the director gets off track making specious connections between domestic gun violence and American foreign policy. When he eventually hones in on the K-Mart Corporation for selling the handgun ammunition used in the massacre, the company almost immediately gives in to his demands and discontinues that entire product category. Flabbergasted, Moore is left unsure what to do next. Should he celebrate? Should he make more demands or pick another corporation to attack? What's the appropriate reaction to a success that was borne out of misfortune?

Nevertheless, even if flawed, Bowling for Columbine is still a powerful, important work. Beyond the levity, the movie has a strongly melancholy tone, mournful of the many tragedies that have occurred in this country. Honestly, it ought to be Michael Moore's least controversial film. The movie says that murdering people is bad and we shouldn't do it. How could that possibly be a controversial message?

Ultimately, the film isn't even anti-gun or anti-NRA, as it's been portrayed. Moore does not say that gun control laws are a cure-all answer. He doesn't have any answers in the end, just a profound sadness that our country has reached a state where mass-murdering children is a common occurrence that nobody in power (on either the Left or Right of the political aisle) has made any real effort to understand or to stop. That's a damn disgrace, and a message that hasn't aged a minute.

Bowling for Columbine enters the Criterion Collection (the first Michael Moore film to do so) as spine #928, under license from MGM. The disc comes packaged in one of Criterion's clear keepcases. A fold-out booklet contains an essay by film critic Eric Hynes. The disc menu plays a short montage of sensationalized news clips in a loop. At least two variations of this montage are available, and the disc may switch between them if you play a feature and then come back to the menu.

MGM first released the movie on DVD back in 2003. As far as I'm aware, that disc was never upgraded with any sort of superior edition until now.

Common for a documentary, Bowling for Columbine consists of a variety of different sources edited together, and as such can be wildly inconsistent in appearance. This is to be expected. The bulk of the footage that Michael Moore shot himself was photographed on either broadcast-grade (circa 2002) high-definition video or on 16mm film. Other segments may be comprised of MiniDV, Super 8 film, VHS, or other formats, including very low-definition security camera footage of the Columbine tragedy itself. All of these elements were converted to a common format for post-production and then transferred to 35mm film. Per the liner notes in the accompanying booklet, the Blu-ray was mastered from a 35mm interpositive. It's encoded on disc in 1080p/AVC MPEG-4 format at the theatrical aspect ratio of 1.85:1.

The HD and 16mm sections look adequate enough with acceptable detail and color, though dark scenes can be swamped in heavy grain or video noise. Much of the movie has a recurring issue with whites clipping and losing detail. I'm not sure whether that stems from the original source (perhaps the video cameras had white balance problems?) or happened during the video transfer. In either case, it's rarely bothersome.

None of the lower-res sources have what you would call good picture quality. Many of them look downright awful. Again, this is a documentary. You get what you get, and it's perfectly fine. Nobody will ever watch this movie hoping for a home theater showpiece. 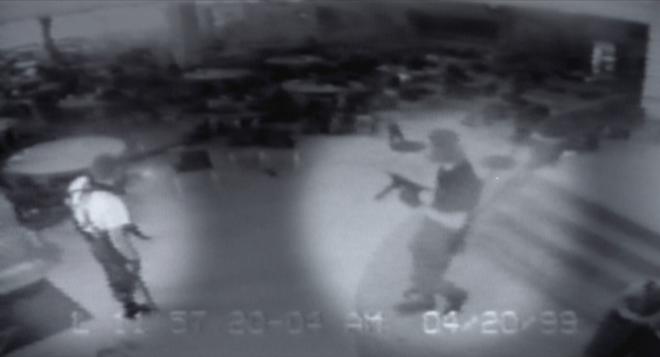 The DTS-HD Master Audio 2.0 surround soundtrack is likewise as serviceable as it needs to be without any attempt at razzle-dazzle. Dialogue is crisp and intelligible. Music sources vary in fidelity, but never to the point of distraction.

This is a matrixed surround encoding. When decoded with an appropriate upmixer, music is about all that expands to the surround channels. I used the Dolby Surround Upmixer in my receiver and, if anything, found it to be a little too aggressive with pulling music to my surround and height speakers. This is the kind of movie you could equally watch in basic stereo and not feel that you've missed anything important. 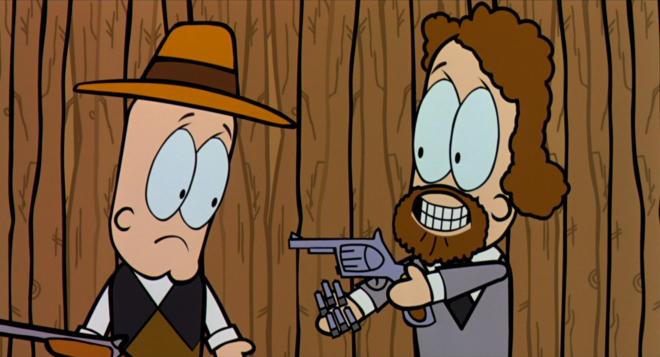 The Blu-ray carries over most of its features from the 2003 MGM DVD. Disappointingly, only one item is new to Criterion.

The old DVD edition also contained a jokey "Receptionists' and Interns' Audio Commentary," an amusing 21-minute interview by Clinton Press Secretary Joe Lockhart conducted at the U.S. Comedy Arts Festival, and DVD-Rom features called "The Teacher's Guide" and "Michael Moore's Action Guide." None of these were retained for the Blu-ray. The only of them that might have been worth keeping is the Lockhart interview. 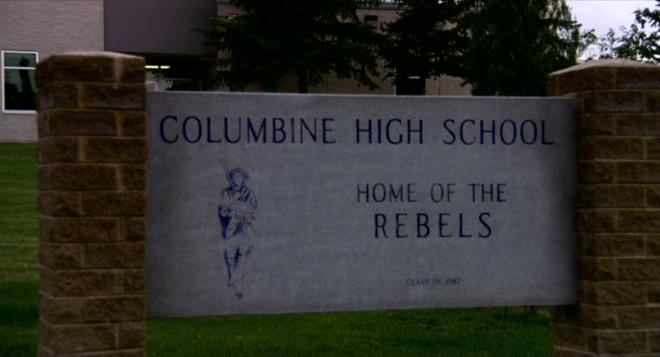 Setting aside debates about whether the movie is actually a documentary (it's really more of a political broadside and never pretends to be otherwise), Michael Moore's Bowling for Columbine is sadly more relevant today than ever. The issues it explores have regrettably not improved in the slightest over the ensuing decade and a half, and may have even gotten worse. Unfortunately, some people still really don't want to hear that message, and I expect that a re-release of the film today will be greeted with just as much ire and damnation as it was the first time around.

For its part, the Criterion Blu-ray offers some improvements over the old DVD edition from MGM. However, this has never been a visually-driven movie and I'm not sure that the upgrade potential will seem all that compelling to fans, especially since the supplement package is rather weak by Criterion standards. Nonetheless, the movie belongs in many collections and still merits a recommendation.