Like Wes Anderson's previous whimsically absurdist comedies, Isle of Dogs is a unique and intricately-designed post-modern science fiction world unto itself. It's not enough that the film's story about a boy trying to find his dog against a backdrop of reactionary politics is hilarious, every scene is filled with minute details and visual gags that it howls for multiple viewings. This film is a master's course in scene design and story execution. 20th Century Fox brings the film to Blu-ray with a beautiful image transfer and a stellar audio mix. Bonus features are sadly slim but they're at least informative. If you're a Wes Anderson fan, Isle of Dogs is VERY Highly Recommended.

"Ten centuries ago before the Age of Obedience, free dogs roamed at liberty marking their territory."

In a world stuffed to the gills with superheroes, sequels, and remakes - it's a grand day when you can step back and take a fresh breath of cinematic air. Wes Anderson is one of the few working American directors who consistently brings something new to the screen. He may have tuned his ear for dialogue. He may use many of the same cast members from one film to the next in roles designed for that actor's style. He may have perfected his orchestrations for delightfully silly plot scenarios. But each of his films is unique tapestries that require the viewer to pay attention to the finest of details to fully enjoy the director's sense of humor. Isle of Dogs is no different. Anderson's latest foray into stop-motion animation is a deceptively simple story about a boy trying to find his dog set against a backdrop of reactionary politics.

In the near future, the canine flu has spread throughout Megasaki City. To prevent its spread to humans, Mayor Kobayashi (Kunichi Nomura) has issued a decree that all dogs will be removed and left on Trash Island. When the mayor's ward Atari (Koyu Rankin) crashes his plane on the island to rescue his dog Spot, he inadvertently triggers a political tidal wave in the city. But thanks to dogs Chief (Bryan Cranston), Rex (Edward Norton), King (Bob Balaban), Boss (Bill Murray), and Duke (Jeff Goldblum), Atari has a chance at being reunited with his best friend. 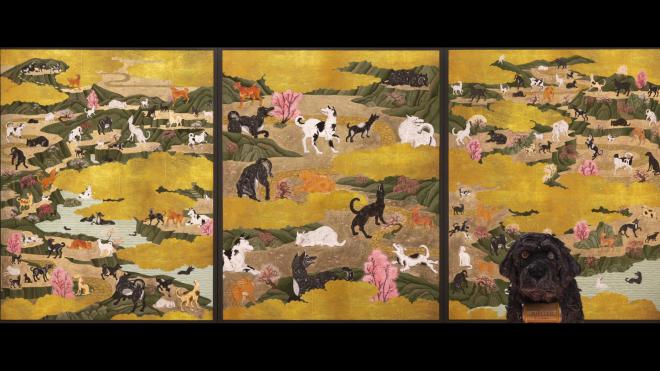 The above paragraph is about the best I could do to summarize the narrative without giving away too much or withholding important elements that would be relevant to entice someone to check the film out. All you need to know is a boy is trying to find his dog. The film uses stop-motion animation. The voice cast is incredible. If you're already on the Wes Anderson bandwagon, you know that no story is as simple as it seems and there is a lot of ground to cover. I once heard Isle of Dogs described as a "Kurosawa film made by Rankin-Bass" and that's probably the single best way to express what to expect from this film.

In all honesty, I didn't know how Anderson could top The Grand Budapest Hotel. That film was an intricately designed comedy with subtle jokes and hilarious performances from a variety of talented actors that I felt if Anderson never made another movie, it would have been the perfect one to depart on. While perhaps not as irreverently silly, Isle of Dogs is another impressive production of style and substance, design, and hilarity. All of his films have featured impressive and detailed production design work - The Fantastic Mr. Fox was an especially choice example for comparison - but the world-building that went into this film is staggering. Every shot has something to look at and absorb. For what Anderson managed to achieve visually with practical physical objects, it could only have been produced in stop-motion. 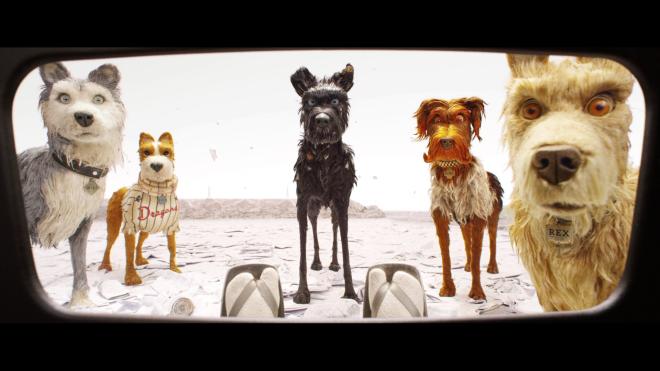 While politics do come in into the film, I wouldn't call it political. At least not in a way that is intentionally meant to echo modern times. Reactionary politics have been a thing for a few decades now. If anything, this film aptly lampoons fervid political stances as it can silence voices of reason on both sides of an argument. When the world of Megasaki City is about to go to pieces, the film beautifully segues back to what is most important, a boy trying to find his best friend - and the friends he makes along the way. Like Dog Flu, there is a heartfelt sincerity and charm to Isle of Dogs that is infectious and makes you realize how petty and small so many squabbles are.

I don't quite know how to gauge how kid-friendly Isle of Dogs is as I don't have children myself, it's a bit more intense than Fox, but it's still hilarious with a terrific voice cast. There were kids at the theater I saw the film at, and they seemed to be enjoying the hell out of it. So on that note, I'll leave it up to parents to decide. It's innocent and innocuous enough that any adult themes or gags would probably go over a kid's head.

By the time the credits rolled for Isle of Dogs, I lamented the simple fact that it will likely be a few more years before we get another Wes Anderson film. However long that film takes to reach theater screens, I'm confident it will be worth the wait. In the meantime, I'm sure I'll have watched this film several more times alongside his other films. Isle of Dogs is another terrific accomplishment from a talented and creative filmmaker.

Isle of Dogs lands on Blu-ray from 20th Century Fox in a two-disc Blu-ray + DVD + Digital HD set. Pressed onto a Region A BD-50 disc, the discs are housed in an eco-friendly case with identical slipcover artwork. The inside artwork is a recreation of one of the propaganda leaflets from the film. The disc opens to a static image main menu with traditional navigation options. The included digital copy is Movies Anywhere compatible.

To be upfront and honest, the only bad thing I can say about Isle of Dogs' 1080p 2.39:1 transfer is that it isn't available in 4K seemingly anywhere (my EU import pre-order was canceled). Even though the film was finished on a 2K Digital Intermediate, this is such a beautiful, colorful, and striking image that it cries out for UHD. But, such as it is, this is a fantastic transfer that showcases everything great about Blu-ray. Details are amazing. Almost every shot you feel the need to pause it and just look at. The scale, the intricacy of the scenery, the unique features of each of the dogs and the human characters - especially the shrapnel sticking out of Atari's head - is all on display. Colors are bright and robust, covering the full spectrum. Primaries are beautiful, blues especially enjoy a degree of prominence as a number of the dogs have bright blue eyes. Black levels are deep and inky and there is great shadow grading allowing for the image to enjoy a rich sense of depth and dimension. Free of any kind of compression artifacts or anomalies - like I said at the beginning - the only way this image could possibly look better is uncompressed, upscaled, and given an HDR pass (preferably Dolby Vision).

Isle of Dogs also enjoys a splendid DTS-HD MA 5.1 audio track. The film is in a mix of Japanese and English (depending on the species of the character) and the audio keeps dialogue pitch-perfect throughout. One of the film's ongoing gags is the fact that the Japanese characters aren't given any subtitles. So, unless you speak Japanese, you're left to infer meaning through tonal inflection against the visual cues making the sound an especially important aspect of the film. It honestly makes me want to learn the language now. I don't think there's much to be missed, but I'd still like to know what some characters are saying - I'm sure there are some deep in-jokes peppered throughout. Sound effects are lively and spacious giving the track a great sense of imaging and activity. Even when things are quiet on Trash Island, there is rustling winds and the sounds of creaking garbage to fill the soundscape. Scoring by Alexandre Desplat is again uniformly excellent and perfectly accentuates the film. Absent an Atmos mix or DTS:X, there's little room for improvement here. A terrific audio track.

Like most of the initial bonus feature offerings for Wes Anderson films, the extra features are a bit on the slim side of things. As past is prologue, you can expect the best stuff is being saved for the eventual Criterion Collection release. That said, what's here isn't half bad, there's just not a lot beyond the EPK tried and true basic stuff. Don't get me wrong, these bonus features are great to look at, but they're entirely too brief to be comprehensive. Each of these sections could be an hour long and I'd still feel like there wasn't enough material.

Isle of Dogs quickly secured a space on my "Best of 2018" list. My regret is that I was only able to see the film in theaters once as my wife and I were bogged down with the hijinks of having to pack up our apartment and move. If it wasn't for that unfortunate piece of human minutiae we would have treated Isle of Dogs like previous Wes Anderson films and rewarded it with multiple theatrical viewings. It's another delightful human and humane comedy from the master filmmaker that is full of heart and whimsy and lacking in cynicism in a world that could use a lot more of that kind of thing. As a piece of stop-motion animation, it's an absolute visual feast for the eyes and an incredible accomplishment. 20th Century Fox releases the film on a technically perfect Blu-ray. The video transfer is flawless and the audio mix is a sonic delight. Bonus features are the only area with room for improvement with this release. Until the day when the Criterion Collection eventually releases their edition or if the film is given a very deserved 4K Ultra HD turn, you can safely consider this Blu-ray release Highly Recommended. I hope you enjoy this one as much as I did.

Sale Price 7.99
List Price 26.99
Buy Now
3rd Party 6.99
In Stock.
See what people are saying about this story or others
See Comments in Forum
Previous Next
Pre-Orders
Tomorrow's latest releases