Overview - A fisherman abandons his big-city life to find himself in the wild.
OVERALL
Rent it

Do you remember how the dad in 'Cloudy with a Chance of Meatballs' can't express himself to his son without a fishing metaphor? That's what 'The River Why' is like - a ton of fishing stories that relate to life, death, love, happiness, and family.

'Friday Night Lights' actor Zach Gilford stars in this lightweight drama as a socially awkward guy who is fed up with his parents and their bullheaded selfishness. The only thing he really knows how to do is fish, so he leaves home and rents a small cabin on the banks of Oregon's River Why. There he meets new friends who help introduce him to philosophy, religion, love, and the meaning of life.

The use of a constant narration is annoying when not done stylistically (like 'Fight Club.') Films are meant to translate words into feelings and emotions placed on screen via moving pictures. Narration defeats the purpose, like having a book read to you. You shouldn't need to hear the central character's own words to know how he feels - you should get that from what you see on screen. But 'The River Why' uses it like a crutch, never letting up.

From its fantastic supporting cast including William Hurt, Amber Heard, and Kathleen Quinlan, the performances are great - it's due to the boring and cliche screenplay that 'The River Why' fails. Our central character meets a pretty tom boy, it's love at first sight for both of them. She helps him find his own balance in life, including resolving the issues with his folks. What begins feeling like a poor man's 'Into the Wild' turns out to be nothing more than a generic coming-of-age story made for fishermen/women.

Unless you're like the fisherman father in 'Cloudy with a Chance of Meatballs,' I suspect you're going to look at 'The River Why' as a stretch. Sure, these analogies can be made, but they're struggling to make the connections - especially in the voice-over metaphor that closes the film. You'll understand what they're getting at, but it won't have any impact on you because of how corny it is.

Image Entertainment has placed 'The River Why' on a BD-25 in a semi-eco-friendly blue keepcase. When you put the disc into your Blu-ray player, absolutely nothing plays before the main menu. Taking place mostly in the outdoors, 'The River Why' shows off a great, sharp and clean transfer like that of any well-made nature documentaries. This transfer truly does justice to the beauty found within the northwest region of the United States.

With only a few soft shots, the majority of 'The River Why' shows off the finest details - from a single leaf in a shot of countless tress, to the droplets of water that splash up each time a fish is pulled from the water. Detail is rarely lacking.

Colors are vivid and natural. Blacks levels and contrast are spot-on. Edge Enhancement, DNR, aliasing and artifacts are never an issue, but banding shows up during a few dark underwater shots of a prize fish swimming up stream. Aside from that and the indescribable general look of 1080i video, it's nearly perfect.

'The River Why' features a sole English DTS-HD Master Audio 5.1 track, but it might as well be a 2.0 Dolby Digital track.

The only times that surround and rear channels are even engaged are in the outdoor shots. Then, and only then, do all speakers kick in and brilliantly teleport you to a nature setting. The babbling river, blowing leaves and general ambient forest sounds perfectly fill the space. But when removed from those settings, the sound is restricted to the forward channels.

The entire audio track itself is on the quiet side, the vocals being more quiet than the rest. Also missing from the mix are low frequency bass tons. My subwoofer features a red light that turns blue when activated. Unfortunately, the light was only blue for maybe five collective minutes of the entire film. 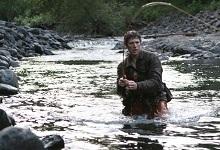 Despite featuring Oscar-winning and Oscar-nominated actors, 'The River Why' is nothing more than a made-for-television movie that found a budget after some tycoon watched 'Into the Wild.' It's a shame that the great video quality is brought down by lazy audio and a cliche-filled screenplay.This is best as a rental.

Sale Price 17.97
Buy Now
3rd Party 14.99
In Stock.
See what people are saying about this story or others
See Comments in Forum
Previous Next
Pre-Orders
Tomorrow's latest releases