Overview - A man kidnaps a woman and holds her hostage just for the pleasure of having her there.
OVERALL
Worth a Look

Freddie Clegg (Terence Stamp) is quite the catch. The young man with a taste for beauty and an eye to match won a handsome lump sum and bought a wonderful country home, full of secret nooks and crannies, with no neighbors for some distance, and tons of foliage to maintain. Though he rolls in a nasty puke green van with window blinds, it's easy to tell that Clegg is a lady's man through and through. Why, he even has a bottle of chloroform in the glove box...

Clegg isn't right in the head. He's an outcast. As long as he can remember, he's collected butterflies, taking their beauty and pinning it to his walls and displays. Now, with a remote home with a lavish basement, he's looking to expand into a new form of collecting: people. The woman who has long caught his eye (Samantha Eggar) soon learns the depths of his depravity as she is drugged and awakens in a strange room with no possible escape. She's stuck playing Clegg's game, at his mercy for the base necessities to survive. He's showered her with lavish gifts and promises of freedom, but there's more to their twisted relationship than the potential case of Stockholm Syndrome.

William Wyler's film adaptation of the 1963 John Fowles novel is a classich. It has the hardware to prove it was appreciated by critics (including three Academy Award nominations and a few other odd wins, including best acting awards from the Cannes Film Festival), and the performances of its two leads has certainly survived the test of time. The film's creepy aura and extreme moodiness makes for an enjoyable viewing experience, as this warped film with a perturbed sexuality to it rolls on by. The stories of alternate endings and entire subplots removed from the film only add to the interest I found in this fun little gem, as the mind wanders with all the stories of could have beens and almost weres. Honestly, though, no matter how enticing some of the sequences sound, I'd not change this film for anything.

This is a classic suspense thriller, with little in regards to violence, or even the threat thereof. The mental instability of Clegg makes every minute a nail biter, as his bizarre actions never quite add up, and his fickleness concerning his newest prize is most definitely something that would never be found in film again, as this kidnapper protects his victim's modesty, and cares for her in a sick manner guaranteed to only be one sided, no matter how long he tries to mold the woman to his liking.

'The Collector' is at its best through Miranda Grey (Eggar)'s eyes, as we are occasionally given entire sequences from her POV, rather than her captor's, putting the lush, lavish prison she's confined to into a different perspective, adding to the creep factor of it all. Without a great performance it would have been for naught, though, and the chemistry, the believability in both roles, it's hard to separate actors from their acting, making for a very enjoyable slow burning film that is full of interesting sequences and believable twists and turns.

'The Collector' has a class to it that just isn't found in many films these days. The limitations of the time help keep it chaste, yet Eggar almost drips sex appeal in a number of sequences. Stamp's sociopathic brooding is fantastic, creating a vibe throughout the entire film that doesn't waver in the slightest. This is a look into the mind of a demented man, and the account of his worst deeds, in shocking detail. This isn't an exploitative, blatantly cruel film. It's a disturbed love story, even if it's a love that isn't reciprocated. The poster says it best: this is "almost a love story." Almost. Damn those technicalities!

'The Collector' arrives on Blu-ray on a Region A marked BD25 disc, with no pre-menu mumbo jumbo. There are no extras listed on the package, though a trailer can be found in its own tab. There is no audio set up tab outside of subtitles, as only one spoken track is on this disc. 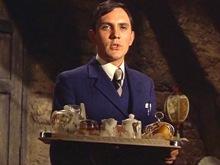 'The Collector' is presented in 1080p with the AVC MPEG-4 encoder at 1.85:1. This disc has its ups and downs, including plenty of odd, lingering issues in the source.

The opening shots aren't exactly sharp or vivid, with muted colors to boot, but after a while, the film blossoms, opening up with some very bold, nice looking color and plenty of great looking shots. There is still the odd muted, muffled, or ugly moment, including some random softness, so pay attention to the tall grass and you'll notice when greens are on spot, and when they're almost non-existant. This disc is free from any dirt or debris, save for the occasional squiggly that was possibly burnt in long ago, while artifacting or banding are never present. Grain is not even throughout the film, but it's also never tampered with.

Facial features are hit or miss, with random shots showing tons of clarity and information, while many others featuring a lightly diffused look, with little in terms of detail. Skin tones sometimes leap around the color scale, outside of shots with obvious lighting influences, but for the most part are natural. Contrast levels are solid, though the occasional little exaggerated, unnatural edge can be a little annoying.

This film has a few sequences where the end of a scene, then the start of another, will shift dramatically, with detail taking a major dive each time before the scene transition is stable for a second before clearing back up. This doesn't happen until after the thirty minute mark, but once you notice it, you'll see it every time, especially when a few instances happen with shots of the same place, the brick mini-fence outside the basement entrance. At the 1:12:09 mark, there's a quick stutter that seems odd, as well. Taking the area frame by frame, it's as if Eggar is getting up, and then we see a second or so backwards as she shifts back down and gets up again. It's an odd malady, but one that is highly unlikely to be the fault of this disc. Additionally, the odd leap at the 1:48:47 mark is clearly an editing cut, but damn is it distracting.

This disc really does shine, with long periods of startlingly good picture quality. Fans will be beyond pleased. There are issues, and some of them are annoying, but for the age of the film, and the dumped off on another company's catalog status on Blu-ray, the quality of this disc is beyond belief. 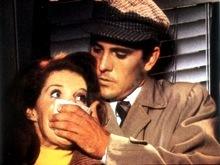 The audio for 'The Collector' is presented in uncompressed Linear PCM 2.0.

This nearly fifty year old film can only improve so much, considering this isn't one of those expensive, meticulously restored titles. There's some good range on display at times, and the majority of the film features accurate dynamics and clean, clear dialogue. The score has a few spots where it really gains in volume and gets pretty strong, even if it lacks depth, and can be quite sharp, but the random gravelly, static-y moments don't help it, and there is some random tinniness to it.

This is a passable track for a solid film. Going in, I wasn't expecting much at all, so what I experienced was pretty much appropriate.

The lone extra in this release is the Theatrical Trailer, in HD. It's not your ordinary trailer, so it's very much worth a watch. 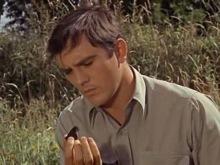 'The Collector' is a fine classic suspense thriller, one that doesn't fall to the modern day pratfalls of wanton excess and simplification. This film doesn't hold you by the hand, and presents a very complicated pair of leads, who develop as the film progresses, with a few subtle flashbacks that fill in the tiny logistical gaps. It's a must see film. This catalog Blu-ray release from Image, taking over for Columbia/Sony, has very, very good video, the audio you have to expect for a title this age, and a trailer. Curious parties, inquire within. 'The Collector' isn't a masterpiece or pivotal genre film, but it's very entertaining, and the runtime flies right on by.

Sale Price 12.79
List Price 17.97
Buy Now
3rd Party 29.99
In Stock.
See what people are saying about this story or others
See Comments in Forum
Previous Next
Pre-Orders
Tomorrow's latest releases