Overview - Suzanne Stone is an aspiring TV personality who will do anything to be in the spotlight- including enlisting 3 teenagers to kill her husband.
OVERALL
Worth a Look

You wouldn't be able to tell by its generic sexy thriller cover, but 'To Die For' actually exudes more of a Tim Burton-like whimsical feel. Director Gus Van Sant ('Good Will Hunting') has somehow taken a story that you could find any Friday night on the latest 'Dateline,' and made it a fun, playful thriller about greed and the detrimental results of too much ambition.

Suzanne Stone (Nicole Kidman) is a driven woman. That's the only way to describe her. She always gets what she wants, and what she really wants is to become a world-famous news anchor. She'll stop at nothing to succeed. She gets a job at a local television station and practically barges her way through the door. The station manager doesn't mind, because he doesn't want to do much of anything anyway. Suzanne takes over the weather reports, but in her mind it's one step closer to the big prize: network TV.

Her husband, Larry (Matt Dillon) is less than thrilled about the whole situation. He wants to start a family and have kids. Suzanne wants to pursue her dreams of becoming famous and having kids doesn't jive with that plan.

The entire movie is discussed in a pseudo-documentary fashion. One of the first things we see is Larry lying on the floor in a pool of his own blood. How did this get so out of hand? Well, that's what we're here to find out. A camera crew interviews the different parties involved with Larry's murder. The investigation centers on Suzanne as her parents, Larry's parents, Larry's sister, and a few high school outcasts offer up their versions of the story.

The way the film is constructed is its biggest strength. Like any 'Dateline' murder mystery we get bits and pieces of the story throughout from multiple characters. While they're telling their stories we flashback to the events being discussed. They're not always chronological, but the way Van Sant has pieced them together, everything makes sense.

Danny Elfman's original music lends a playful quality that you wouldn't expect from a movie like this. It completely changes up the mood to something surprisingly light and comical.

Yet another movie that makes us miss the actor Joaquin Phoenix once was, before he went all self-destructive. Here Phoenix plays a high school student who falls in love with Suzanne Stone. Even at a young age Phoenix really could command the screen, even when he was sharing it with the likes of Nicole Kidman.

Speaking of Kidman, this is one of her best roles as far as I'm concerned. The faux-happy smile and falsely cheerful attitude she plasters all over Suzanne Stone is disconcerting to say the least. Playing a woman on the verge of a complete mental collapse. I just as easy to picture her in a straitjacket and rubber room as it is to picture her in a blazer behind a news desk.

I had a lot of fun with 'To Die For.' I'd seen it over the years sitting on the shelves at Blockbuster, or other video stores, with that standard sexy thriller cover and I was never really enticed. I'm glad I gave it a chance this time around because Van Sant has crafted an altogether witty, fun murder mystery.

This is an Image Entertainment release. It's been pressed onto a 25-GB Blu-ray Disc. They've packaged the disc inside a standard Blu-ray keepcase. The back of the cover indicates a Region A only release. 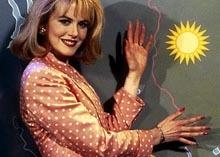 The 1080p picture provided by Image is about what you'd expect from a mid-90s movie. It lies somewhere in the middle of average and slightly above average. A presentation that isn't hard on the eyes, but is pretty far from being actual demo quality.

Fine detail seems to suffer a bit. Faces appear a tad too smooth than they most likely should be. Does it look like egregious uses of DNR were applied? Not really. Nothing looks overly waxy or awful, but fine detail like lip lines, small hairs, and even tiny freckles end up getting lost or obscured. There are a few things at play here though. One is the age of the movie in addition to its second-rate catalog standing. The powers that be just aren't going to put the time into remastering and refinishing a movie that isn't as widely popular as some of the other releases (think of what Image did with the 'Twilight Zone ' seasons). Secondly, is the nature of the movie itself. The soft focus and hard lighting are due, most in part, because of the mockumentary type filming that's taking place.

Grain is fairly heavy, but does add that cinematic quality to the movie. I noticed only minor aliasing problems coupled with some edge ringing issues. Nothing to get overly worried about though. On the whole Image has done a satisfactory job bringing this movie to Blu-ray. Fans will likely be pleased with how it looks.

On the other hand the audio is very disappointing. 'To Die For' was released in theaters with a surround sound track, but here all we get is a DTS-HD Master Audio Stereo track. Elfman's glorious mood-setting music is confined to the front two speakers and isn't allowed to travel throughout the soundfield.

Dialogue is clear, except many of the whispered lines uttered by Phoenix get lost or come out far too muted.

It's simply just a little disappointing that we didn't get the original 5.1 surround track that 'To Die For' was originally released with. Yes this is a lossless track, but if the original audio track is out there then why not use that instead?

'To Die For' is a pleasantly surprising dark comedy. I never thought I'd like it as much as I did, but its bizarre mood and its pitch-perfect performances were just what I was craving. The video is a decent enough presentation, but the audio is disappointing. There have been no newly commissioned special features which is a shame. I'd love to hear a commentary from Van Sant about this movie. Still, it's worth a look if you're searching for something a little out of the ordinary.

Sale Price 12.95
List Price 17.97
Buy Now
3rd Party 10
In Stock.
See what people are saying about this story or others
See Comments in Forum
Previous Next
Pre-Orders
Tomorrow's latest releases