Overview - Movie based on the life of Gia Carangi, a top fashion model from the late 1970s.
OVERALL
Give it a Rent

It's almost a foregone conclusion that whenever you're faced with a dramatic biopic of a person who attained stardom way too fast that it will inevitably end up in a spiral of drugs, booze, and sex, until the person is either dead or no longer able to continue with their career.

Gia Carangi rose fast through the ranks of models to become the premiere fashion model of the 70s and early 80s. Her antagonistic spirit seemed to make photographers and fashion designers desire her even more.

Gia (Angelina Jolie) had no intention of becoming a fashion model. At the beginning of the movie she's seen working in the family diner with her hair dyed pink, going through a punk rock phase. In order for us to know that she's a little off-kilter she carries around a knife and yells at people, then laughs. She's beautiful, but abrasive. And she doesn't care at all.

Then Gia is discovered and is quickly whisked away into the world of fashion. Meeting photographers, other models, and being introduced to drugs. A habit that she just couldn't quit.

The story is told in the style of 'To Die For.' Interviews from people who knew Gia talk about what she was like, and then we get flashbacks to see exactly what went on during her tortured life.

Jolie's performance here is the best part of the movie. Yes, many of the interviews from her mother and friends are overly melodramatic, but Jolie seems to nail this part. She plays Gia with a reckless abandon that I assume is what she was like in real life. When Gia becomes addicted to drugs it's a treat to watch Jolie as she spirals downward into a life of dependence and addiction.

Gia meets a woman, whom she wants to spend the rest of her life with. Linda (Elizabeth Mitchell) is that woman. Their relationship is the most interesting aspect of the movie. Is Gia a lesbian or just someone who wants to find love wherever it may exist? That question is never really answered and you're left to draw your own conclusions. Many guys out there talk about 'Gia' because of its well-known sex scenes with Mitchell and Jolie. What we tend to forget though is how honest and thoughtful those scenes are. In a world where Gia was surrounded by sex at every turn, those are the only times where you actually feel that she is enjoying herself. Yet, even with that budding relationship taking hold Gia couldn't overcome her addictions.

Is 'Gia' a perfect movie? No. It's about 30 minutes too long and becomes redundant after a while. How many times do we have to watch her relapse before we understand, "Okay, she's never going to get her act together. We know that. Move on."

Surprisingly, I liked 'Gia' more than I thought I would and not just for the abundant Jolie/Mitchell nudity. It's true that most celebrity biopics are exactly the same. We watch them rise to glory fast and then come crashing back down to earth because of their stupidity and recklessness. 'Gia' is no different in that respect, but watching Angelina Jolie act it out is special.

'Gia' is an HBO release and the case has been emblazoned with an "Unrated" stamp. Does this mean there's even more nudity that the edited version? Almost certainly so, although I can't tell you what has been added or changed here. I never saw the movie in its other version. 'Gia' has been pressed onto a 25GB Blu-ray Disc and is housed in a standard keepcase. It's marked on the back as a Region A release. 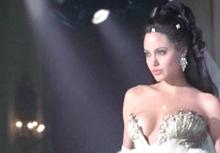 First thing to note about this Blu-ray release is that it has an aspect ratio of 1.78:1 whereas the previous DVD release and actual on-air broadcast of the movie had a 1.33:1 ratio. I don't have the original DVD to compare the framing of the film, but from what I've read online it appears that the 1.78:1 ratio gives quite a bit more image on the sides and looks like it frames the scenes better than the 1.33:1.

The movie does have a refined look to it, although there is a heavy amount of grain persistent throughout. The grain does become a bit troublesome during the black and white scene where Jolie and Mitchell are naked together on opposite sides of a chain link fence. The grain seems to take over and dance around the picture instead of adding to its cinematic quality in that one scene. The rest of the movie handles the grain quite cinematically though.

The interview scenes are another sticking point for this presentation. They look like they've been intentionally filmed with a different camera or filmstock because some of the character's faces like Linda and T.J. appear flat, with a home video-like quality to them. Colors are a tad muted as the entire movie has that faded glow that many late 90s catalogue titles have. Detail is rather nice, and close ups reveal everything from Jolie's pouty lip lines to the grossness of the oozing open sore on her hand where she shoots up. There are a few minor setbacks, but altogether it's a good looking presentation. 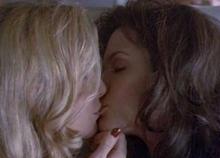 There's not much to 'Gia's newly mixed DTS-HD Master Audio 5.1 soundtrack. It's a talkative movie with little in the way of real sonic delights. That's just the nature of the movie though. Dialogue is always clear and, in crowded fashion shows or photo shoots, voices travel to the rear channels as ambient sound.

The movie's jazz-infused soundtrack travels throughout the sound field making you feel like you're in a jazz club for most of the movie. There aren't many instances where LFE is called upon, but there are low-end sounds here and there, like the revving of a motorcycle engine or the pounding of dance music in a club.

I wasn't expecting much from 'Gia's audio mix, but it delivered a very satisfactory product. It isn't something you'll stick in to show off to your friends, but I'm glad to say that it represents the film as a whole very well.

'Gia' is a competently put together biopic about the tragic life of a fashion superstar. I did think that the movie runs on far too long for its own good, but Jolie's performance is the reason you're picking this one up. She's great in it. The video and audio are above average too. I still wouldn't recommend it for a purchase, but it's definitely worth a rental if you haven't seen it. If you're a fan, you should be happy, especially at this price!

Sale Price 23.74
Buy Now
3rd Party 44.99
In Stock.
See what people are saying about this story or others
See Comments in Forum
Previous Next
Pre-Orders
Tomorrow's latest releases