Overview - The Cannonball Run brings Burt Reynolds, Roger Moore, Farrah Fawcett,Dom DeLuise, Dean Martin, Sammy Davis, Jr. and an all-star cast to the staryting line of the ultimate auto race., a madcapcross country scramble that roars full-speed ahead. Hal Needham, the director of such souped-up hits as "Smokey and the Bandit," "Hooper" and "Smokey and the Bandit II" is at the helm of a wild action-comedy inspired by an acctual event: The Cannonball Sea-To-Shining-Sea Memorial Trophy Dash., an anything- goes, all-stops-out and thoroughly illegal- competition that has grown to legendary proportions in the last ten years.
OVERALL
Worth a Look

Enjoying 'Cannonball Run' hinges on whether or not you like classic, zany, cornball 80s comedies. If you don't like the utterly cartoony style of these screwball comedies then this movie simply isn't for you. However, if you do relish this particular type of comedy then 'Cannonball Run' is simply a must-watch, and I'm betting that if you're a fan of these movies you've watched it numerous times before.

Based upon an actual race called Cannonball Baker Sea-To-Shining-Sea Memorial Trophy Dash 'Cannonball Run' tells the story of a cross-country road race with racers driving any vehicle they can get their hands on. Starting on the east coast, the participants put the pedal to metal in hopes of recording the shortest elapsed time by the time they hit the west coast.

There's a plethora of characters here, so many so that I'm afraid I won't be able to cover all of them. We have Roger Moore playing Seymour Goldfarb, Jr., which in reality is Roger Moore simply playing a James Bond spoof. One of the movie's funnier gags is every time Moore is on screen we get 'Bond' music on the soundtrack. Dean Martin and Sammy Davis Jr. play a pair of guys who dress up like priests and drive a Ferrari. Jackie Chan is himself as he drives across the nation in a computerized car that could've only been built by the Japanese. Adrienne Barbeau and Tara Buckman are two buxom babes who drive a Lamborghini in zip-up spandex suits hoping to get out of as many tickets as possible with their revealing cleavage. There's Jamie Farr as a sheik from the middle east who loves to drive fast and act in what would be considered a pretty politically incorrect way. Finally there's the team of Burt Reynolds and Dom DeLuise who play J.J. McClure and Victor Prinzim respectively. They pick up a braless Farrah Fawcett for the ride because they need a "patient" to lay on the gurney of their makeshift ambulance in case the cops stop them.

'Cannonball Run' has to be the chief movie that Norm MacDonald bases his Burt Reynolds impression on. It just has to. He's such a smarmy, tongue-in-cheek doofus in this movie. It's hilarious, because every time he talks I picture MacDonald on 'SNL: Jeopardy' explaining that his name is now "Turd Furgeson."

Like its wacky race-themed predecessor 'It's a Mad Mad Mad World,' 'Cannonball Run' is a movie where gags and physical humor pinball from one scene to another. Almost like each scene is a vignette or skit where the characters simply see who can pull off the wackiest line, or who can achieve the silliest sight gag. It's usually DeLuise who trumps everyone in that department. With his alter superhero ego Captain Chaos flying into action whenever it's the most inappropriate. The race continues and the groups of racers meet up, try to screw each other over, as hijinks ensue left and right.

'Cannonball Run' is a perfect example at just how lax the MPAA rating system was back then. It seems like nowadays people complain that the MPAA is too lenient in some cases. They need to go back and check out this movie. Rated a tame PG, 'Cannonball Run' has far more cussing and sexual innuendo than I previously remembered. That's not a slight against the movie; it's just funny to me how much the rating system has changed over time. How liberal it was back then compared to how it is now.

Fans of screwball comedies will be happy that this movie has finally found its way to Blu-ray. It's a love it or hate it type of movie, but I for one can't get enough of the madcap zaniness or Burt Reynolds parody of himself.

'Cannonball Run' is an HBO Home Video release. It's been put onto a 25-GB Blu-ray Disc and has been packed in a standard Blu-ray keepcase. The back of the case indicates a Region A only release.

From the opening scene I was actually very surprised with the quality of the video. HBO has done a good job mastering this 1981 movie for Blu-ray. Yes, there are times where edge enhancement is visible, with other times where it's noticeable that DNR was used maybe a bit too much, but on the whole this is a very decent looking picture.

As the movie progresses it seems the picture becomes a bit softer and less defined. Especially the second-unit footage of cars driving against open fields and skylines. That footage seems to have the least amount of clarity out of all of them. However, well-lit close-ups feature quite a bit of facial detail. A fine layer of grain covers the picture, but it doesn't tend to wash out or muffle fine facial lines or the luxurious hair that makes up Reynolds' iconic mustache. Cars have a nice gleam to them. Everything from the ambulance to the Lamborghini looks brand new and sparkles in the sun.

Fans of the movie will undoubtedly be happy with its presentation. It does feature the same type of softness and DNR that one may expect from a catalog title of its age, but on the whole it looks rather good. I didn't notice any glaring video deficiencies or artifacts, and as a matter of fact the entire print looked very clean. Specks and blips were nowhere in sight.

This DTS-HD Master Audio 5.1 track doesn't really pack the wallop you might expect. For the most part it sounds more like a mono – stereo at best – track. This is pretty evident throughout the movie seeing that most all of the action is featured front and center. Whatever sound that is piped into the rear speakers (crowd cheering, rowdy bar patrons and random engine revving) sounds forced and unnatural.

Dialogue is soft and at times unintelligible. The ADR on this movie has always been pretty bad. There are quite a few noticeable scenes were dialogue has been added in but the actor's mouths aren't moving. Car engines sound weak and anemic. There really isn't that much LFE to go around and like the surrounds whatever comes out of it seems like it was forced to be there.

I wasn't as impressed with the audio mix as I was with the video. For the most part the audio does get the job done, but the rejiggered 5.1 mix simply sounds unnatural. 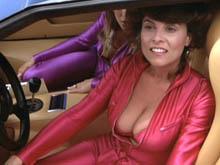 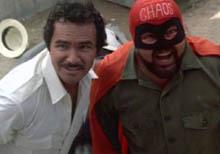 You already know if you're a fan of 'Cannonball Run' or not. Sometimes you just have to have that brainless, situational comedy from the 80s complete with corny sound effects. It's just so silly and nonsensical, but still enjoyable on a lazy Saturday afternoon. The video on this release is surprisingly good, while the audio is underwhelming. It's still worth a look if you're interested.

Sale Price 10.08
List Price 14.98
Buy Now
3rd Party 10.08
In Stock.
See what people are saying about this story or others
See Comments in Forum
Previous Next
Pre-Orders
Tomorrow's latest releases