The Death of Superman is not the first adaptation of the emotional and iconic comic book story arc from a couple of decades ago. This storyline shows the Man of Steel battling a rough, mean beast known as Doomsday in order to save the planet at a catastrophic cost. The film showcases Superman's more intimate relationships and develops the rest of the Justice League in an emotional way. This is by far the best adaptation of the comic series yet. The 1080p HD version looks great but has some banding issues and the DTS-HD 5.1 mix hits all of the right notes. The extras are sparse but informative. Highly Recommended!

The world was rocked back in 1993 when DC Comics decided to kill off the biggest superhero of all time - Superman. This received universal attention in the media and caused a ton of speculation amongst fans as to what's next for Superman and DC Comics. Luckily for everyone, this came in a multi-part storyline, which saw the man of steel come back to fight. Since the comics debuted 25 years ago, we've seen many iterations of the original story with multiple comics, TV shows, and movies. Most recently, the big Batman v Superman movie tried to add this tragic occasion into their film, but it ultimately failed with audiences because it was just an added action sequence to an already packed and poorly made movie. A few years ago, we also received another animated movie called Superman: Doomsday, which followed the Death of Superman but left out quite a bit of the development in characters. It wasn't well received. However today, DC Comics have released yet another reboot of the Death of Superman, which is coincidentally its title.

This animated movie will be served in two parts with the second film releasing next year. I'm happy to say though that The Death of Superman follows the comics quite closely and is a tiny bit longer than the previous film, which gives us some more time with these characters so we really feel the loss of Superman. For those of you who are unfamiliar with this story, specifically for this film, we center on Superman as he's working with the Justice League on some business, while Lex Luthor is up to his devious ways. At some point, a meteor crashes down on Earth in the ocean and a giant beast emerges and starts killing anyone in his path. This beast makes his way to Metropolis. One of the side stories is the loving relationship between Lois Lane and Supes, where Lois finally meets Superman's alter ego's parents, but realizes he is hiding a secret. Of course, that secret is that he's, in fact, Superman and not the bumbling reporter Clark Kent. This causes real strife between them at an inopportune time as Superman has to go destroy this beast which Lois Lane has dubbed Doomsday.

The end result is a somber one, because Earth's hope is killed, which is broadcast across the globe. People mourn, but I imagine the second half of this big movie will feature the return along with a few other Supermans in the mix. What this 2D animated does so well is connect you with Superman's personality and his close relationships, including Lois and his parents. Even Lex Luthor has some redeeming qualities in a strange way. The film also shows how each superhero grieves differently with Superman's death, which is spot on.

The 2D animation evokes those older nostalgic cartoons from the late 1980s and early 1990s and feels more like a real movie rather than some polished piece of 3D animation with no depth. It's a great throwback to our childhood with some good voice work from Rainn Wilson, Jerry O'Connell, Rosario Dawson, Nathan Fillon, and Rebecca Romijn. These actors bring these superheroes to life and give them real emotions in this devastating time for the DCU. The Death of Superman is a great adaptation in animated form and perhaps the best one we have to date on the subject matter. 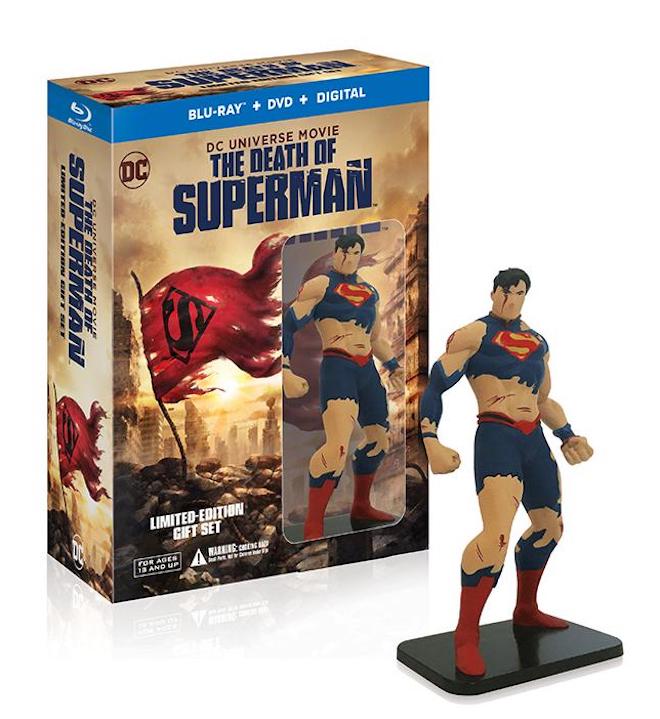 The Death of Superman comes with a 50GB Blu-ray Disc and a DVD copy of the film. There is an insert for a Digital copy, too. The discs are housed in am eco-friendly, hard black plastic case with a cardboard sleeve. The entire Blu-ray packing is then encased in a bigger cardboard sleeve that is numbered on the bottom of the package out of 5000 units. There is also a 4 inch Superman figure in this set where Superman is tattered, bloodied, ripped to shreds. There is no cape on him either. This figure is not posable and comes from the toy studio Gentle Giant.

The Death of Superman comes with a 1080p HD transfer and is presented in 1.78:1 aspect ratio. This is a delightful transfer on Blu-ray with a great color palette and a wistful animation style that is sharp and vibrant. Most of the time in the DCU, these colors are muted with darker imagery, in that everything looks like it's decaying. With The Death of Superman, that's not really the case in that a ton of brighter and bolder colors stand out. Green Lantern's green powers do illuminate the scene with ferocity. The contrast and intense colors from Flash's costume bring out the red and yellow coloring perfectly, which stands out from the rest of the gloomy setting.

Wonder Woman and Superman's blue and red outfits also burst out with radiating shadows and shades. The detail in the animation is bold and rich in this 2D image with deep black outlines over each character and building. The smoke from explosions looks good too without any softness. There is quite a bit of depth to this image given that it's featured in 2D as well. On this 1080p transfer, I did notice banding throughout, especially in pans and in wider shots. It's quite evident in brighter scenes, but it doesn't necessarily hinder the viewing experience.

The Death of Superman comes with a lossless DTS-HD MA 5.1 mix and sounds good for an animated action film. A good deal of the audio mix takes place on the front speakers, but when the action kicks into high gear, the surrounds pick up the pace along with the rumbling bass. When Superman flies through the air in order to attack Doomsday, you'll hear a smooth transitional sound from speaker to speaker, while hearing the destruction and people yelling from down below. The directionality is also first-rate in these scenes as well.

Explosions and Superman's superhero sounds all back a good low end without trying to burst the speakers. Appropriate sound design for big crowds and large rooms such as the Batcave provide the necessary echoes and reverb too. When there aren't buildings being crumbled or explosions rocking Metropolis, the dialogue is clear and easy to follow and situated on the front speakers. There are no problems with pops, cracks, hiss, or shrills, either.

There aren't a ton of extras here, but there are a few fun features to watch. There are two episodes from the 2006 TV series Legion of Superheroes in their entirety along with interviews with cast, crew and more about the big fight scene, the comics, and the upcoming sequel. There are also a few trailers for other DC Comics titles.

The Death of Superman: The Brawl That Topped Them All (HD, 17 Mins.) - Interviews with some popular DC creators and a martial arts expert talk about the history of the comic book and the big fight between Superman and Doomsday.

A Sneak Peak at DC Universe's Next Animated Movie: Reign of the Supermen (HD, 10 Mins.) - The cast and crew talk about Part 2 of this film and what to expect with some artwork for the film.

From the DC Comics Vault: Legion of Superheroes Season 2: Dark Victory Part 1 and 2 (HD, 46 Mins.) - The animated TV series that aired on CW in the mid-2000s has lent these two episodes to this release.

The Death of Superman has been told many times since 1993. The comic books were iconic and rocked our real world when it was released. With many different versions adapted for the big and small screen alike, I can say with full confidence that this Death of Superman movie is the best one so far. The 1080p HD image looks solid with great colors and detail, however, there is some banding throughout the movie. The DTS-HD 5.1 mix does a great job with all of the action and quieter elements as well. The extras are lacking, however, you do get a good sneak peek at the sequel along with two vintage episodes in the DCU. This comes Highly Recommended!