As one of the last movies Paul Verhoeven made in Holland before heading to Hollywood to make blockbusters about cyborg cops and serial-killing sex addicts, Spetters takes a classic rebellious youth genre formula and spices it up with explicit sexual content that edges right up to the border of pornography. Some aspects of the film work better and have aged better than others, but fans of the director will find it interesting. The Blu-ray is a pretty good presentation. Worth a Look.

If the director's account can be believed, Paul Verhoeven's 1980 film Spetters lost him a potential job working on Star Wars. According to Verhoeven, Steven Spielberg was so impressed with his war epic Soldier of Orange that he recommended his friend George Lucas take a look at the filmmaker as a candidate to direct the then-in-development Return of the Jedi, but later rescinded that endorsement after watching Spetters and being repulsed by its content. Leave it to Paul Verhoeven to turn such seemingly innocuous subject matter as a motocross racing drama into one of the most controversial and widely protested movies of its year. The Dutch provocateur almost can't help finding ways to push people's buttons.

The title Spetters is a rare quadruple entendre. The word roughly translates to "splashes" or "splatters," as in both the motorcycles splashing through mud and the french fries spattering in deep fryer oil featured in the movie, but it's also Dutch slang for sexually attractive men or women (the equivalent of "studs" or "babes") and even more crudely can be a term for ejaculation. All of these meanings are relevant and intended. Allegedly, Verhoeven's wife was responsible for this, as the original working title was the far more tepid Buddies.

The film is a coming-of-age story of sorts, about three young delinquents who are equally obsessed with dirt bike racing and with getting laid. Rien (Hans van Tongeren) is a rising star on the amateur motocross circuit, and of the friends has his life together the most. He has supportive parents, an adorable girlfriend, and really seems to be heading places. Eef (Toon Agterberg) is an ace mechanic who can literally (as he demonstrates) put a motorcycle together blindfolded, but continually clashes with a cruel father and keeps having to make excuses for why he can't perform in bed with girls. The hapless Hans (Maarten Spanjer) just can't seem to do anything right. His motorbike repeatedly stalls out, and even when he's gifted a better one, his skills as a rider never match up to his enthusiasm. Girls mostly consider him a joke.

Scoring with girls, or at least pretending to, is a huge preoccupation for these three chauvinist dogs, and they treat them terribly, manhandling women in shockingly vulgar ways that Harvey Weinstein might find aspirational and jumping into bed with any willing partner whenever the opportunity arises. In some ways, the movie plays like a Porky's-style sex comedy, but with an even more malignant strain of sexism and no aversion to showing full-frontal male nudity.

This is balanced somewhat by the introduction of Fientje (Renée Soutendijk), a beautiful concession stand operator and small-time scam artist that all three boys become obsessed with. Fientje is by far the most interesting character in the film, a pragmatic opportunist who uses sex merely as a tool to better her own position, has no compunctions about doing so, and makes no excuses for it. Even as she hops from bed to bed among the three main characters, she freely acknowledges that she's using them for her own ends and never pretends otherwise. A man is only as good as what he can do for her. And yet she's never villainized. In fact, she can almost be read as the hero of the story.

Soutendijk is magnetic in the role. She followed this movie with a lead in Verhoeven's next picture, The 4th Man, and later made her way to Hollywood briefly to play a murderous robot in the lame sci-fi thriller Eve of Destruction. Beyond her, the only faces a Western audience might recognize are Rutger Hauer as the preening national motocross champion and Jeroen Krabbé as a smug TV announcer. Both of those are smaller supporting parts.

Because Verhoeven enjoys being confrontational, he fills the movie with extensive graphic nudity and sex that would have earned its American release an X rating had the distributor bothered to submit it to the MPAA. (It went out unrated instead.) If the film's sexism is a bit bracing by today's standards, its treatment of homosexuality is also uncomfortable to watch. Throughout the picture, gay characters are depicted in broadly stereotypical terms. Early on, the three leads assault a pair of gay men on the street for a laugh, and later one takes up mugging gay hustlers to steal their cash. This eventually leads to a brutal gang-rape sequence, the consequences of which are highly problematic.

I doubt Verhoeven intended his film to be homophobic so much as provocative or transgressive. In his mind, he may have even considered it progressive for the era. Nonetheless, his ideas in this regard were pretty far from enlightened. As a result, the movie proved to be extremely controversial. Critics in Holland rejected it, while an activist group calling itself the National Anti-Spetters Action Committee declared the film anti-gay and anti-woman, and vilified the director in public and on television. All this outrage spurred the filmmaker to leave his native country and move to America a few years later, where he'd soon enough face a similar reaction to Basic Instinct.

Despite (or because of) the controversy, Spetters was a box office hit in Holland and did very well internationally. Although it may have some issues, it's also a compelling character drama with strong performances and some impressive motorcycle stunt riding sequences that are all presented matter-of-factly without any bullshit stylization or editing trickery. It's not Paul Verhoeven's best film, but it was an important work in his early career.

MGM released Spetters on DVD back in 2002. For its American Blu-ray debut, the film has been licensed to Kino Lorber. The disc contains the full, uncensored original cut of the movie, which includes quite a bit of graphic nudity from both genders as well as a few unsimulated sex acts.

The Blu-ray comes packaged in a basic keepcase with some really ugly cover art that mashes together a couple of vintage poster designs that were not very attractive the first time around, and look even worse stacked one on top of the other. The simple disc menu is a low-res, pixelated copy of the lower image.

Kino's Blu-ray packaging boasts of a new 4k restoration. Without having any other copies to compare it to, I'm prepared to believe that this may be the best that Spetters has ever looked on home video. However, it's still a low-budget Dutch film from 1980 and has some limitations that are probably not the fault of the video transfer.

The movie is presented in a 1.66:1 aspect ratio with small pillarbox bars on the sides of the frame. The extended scenes playing under the opening credits look pretty soft and grainy owing to being optical dupes, but the picture improves after that. Photographed by frequent Verhoeven collaborator Jost Vacano, the image generally has decent textural detail and stable colors, but is never a showstopper. Close-ups look pretty nice, but the photography has a fair amount of soft focus and the occasional gauzy mist filter. The 1080p/AVC MPEG-4 encode keeps grain under control without wiping it away. Aside from a significant scratch down the screen during the end credits, the source elements have otherwise been well cleansed of dirt and damage. 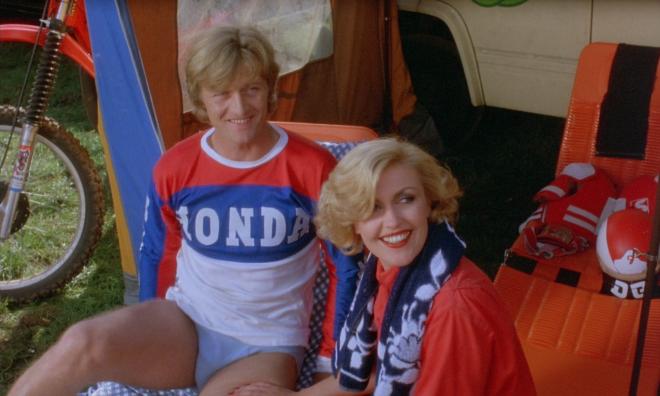 The Dutch DTS-HD Master Audio mono soundtrack will not give anyone's home theater system much of a workout. Dynamic range is very limited and the sounds of motorcycle engines only make a mild grumble. Dialogue, fortunately, is clear and intelligible throughout, which is about as much as you can ask for. The movie's sound design is quite simple and direct.

The electronic score by Ton Scherpenzeel (the keyboardist for a Dutch prog rock band called Kayak) has dated poorly as a piece of music. Fidelity of the track is thin but acceptable.

Spetters never had much bonus content on prior video formats. Kino has carried over the audio commentary and trailer from DVD, while throwing together a new image gallery. 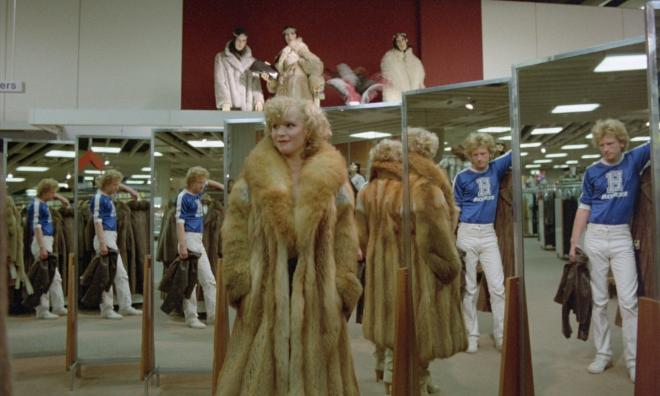 Kino's Blu-ray edition of Paul Verhoeven's Spetters has fairly good picture quality, adequate sound (I doubt it could be much better), and an audio commentary that's worth a listen. Be warned that some viewers may be very put off by the content of the movie, but fans of the director who aren't too afraid of seeing penises on screen should find enough artistic merit in it to justify a viewing.

Sale Price 12.99
List Price 29.95
Buy Now
3rd Party 12.99
In Stock.
See what people are saying about this story or others
See Comments in Forum
Previous Next
Pre-Orders
Tomorrow's latest releases