FBI agent Will Graham (William Petersen) has captured the diabolical Dr. Hannibal Lecter (Brian Cox), nearly losing more than just his mind in the process. But when Graham is called out of retirement to hunt the psychopath known as "The Tooth Fairy" (Tom Noonan in a role Entertainment Weekly calls "one of the freakiest madmen Hollywood has ever given us") he must once again confront the horrors of "Hannibal The Cannibal." If Will Graham enters the mind of the serial killer, can he ever come back?

Joan Allen (The Contender), Dennis Farina, Kim Greist and Stephen Lang co-star in this shocking thriller directed by Michael Mann and adapted from the novel Red Dragon by Thomas Harris. But be warned: Fans and critics alike consider Manhunter to be far superior to The Silence Of The Lambs, as well as one of the most unnerving serial killer movies ever made.

I have a question to all of the 'Manhunter' fans out there: if this film is supposedly so damn good, why is it that, back in 1986 on its initial release, the film got whooped in box office numbers, bowing out of the top twenty in just two weeks, with theater goers literally picking films that had been out for months instead? If the performances were so memorable, how come 1991, when 'The Silence of the Lambs' came a calling, no one was invited back, save for one supporting actor in a different role? Was it some conspiracy that the initial reviews were mostly negative? Let's not get all defensive with the "But Rotten Tomatoes has the film at a 91 percent fresh rating!" bullcrap, as the reviews are predominantly from 1991 and on.

I don't get it. By it, I mean the love for this film, though some may say that I just don't get the film itself. It's kind of hard to miss exactly what all is going on, above and below the surface, of this initial adaptation of Thomas Harris's novel that was later made with its proper title, 'Red Dragon' (and, fittingly, the film was made proper, as well). Perhaps the abundant love in some circles for Michael Mann, here making just his third film, is partially responsible for this newfound adoration for a stinker of a film. Perhaps there's some backlash on the Hopkins iteration of the character, with this initial adaptation being a favorite by default or spite.

Yes, I do realize I just said that I cannot rationalize people liking this film save for their (possibly irrational) hatred of another film or film series. That is definitely how little I think of this film. While Mann would go on to make some polished, amazing features, building an amazing run of great film after great film, the man is not infallible, and this film, no matter which of its many cuts is used as a basis, is proof of such.

Will Graham (William Petersen) is the man who put Lecter behind bars, ending his spree of sadistic murders, exposing the cruel and vile circumstances behind them. After putting himself in the same mindset as the villain to attempt the capture, in addition to being savagely attacked by the killer when exposed, Graham quit the FBI, and even spent some time in a mental facility to cleanse the demons he had welcomed into his mind.

Years later, a new serial killer is on the loose, and the FBI is stumped. Brutal family slayings in Atlanta and Birmingham have forced Graham to give the force one more go round, to capture the man dubbed "The Tooth Fairy" (Tom Noonan). Graham seems stumped on the case, and enlists the best mind he knows to help get a lead before another family is slain: the mind of the man he imprisoned, Lecter.

'Manhunter' is a different film than 'Red Dragon,' despite the shared source material. This original adaptation is heavy on colorization and stylization, to the point that some scenes seem to exist solely to show off colors and attempt to be artsy fartsy in that regard. The focus is decidedly different, with this film being a straight forward look through one man's eyes as we go through a crime scene procedural type film. Yes, in this regard, 'Manhunter' was ahead of its time, as many television shows would use the thematic elements featured here to greater effect. There's also the whole Iron Butterfly tuned finale that is about as suspenseful as listening to a drunk bar patron slur "Piano Man' on a Saturday night. The introduction of the mainstay of the novels and films is also much delayed here, with his appearance proving to be a bit of an odd, buried side plot rather than the focus or secondary theme.

'Manhunter' is also a much less timeless film than the admittedly none-too-timeless 'Red Dragon.' The cinematography is much less refined, bordering on distracting with the lingering moments attempting to pull viewers into the experience and film. The Dollarhyde character, as well as his love interest (Joan Allen) seem rushed and forced, not given proper development to be effective in contrast to the film's hero. We don't have proper rationalization for why some characters do what they do...they just do them and we have to figure out exactly why entire scenes exist. Throw in a drastic change in the portrayal of the iconic cannibal, with where he's less dangerous and manipulative, and more cruel, vindictive, and kind of a dick, and it's hard to really connect with anyone.

Petersen is not a charismatic lead. His line readings feel stunted, forced, his more emotional moments feeling too over the top and silly, and his interactions with Cox about as far from intriguing or entrancing. This makes Graham, the film's primary focus, very uninteresting. The killing timeline seems overly convenient and arbitrary, creating too many cliched moments. The film's villain is hardly intimidating, seeming weak in body and mind, not the type really believable as someone who could murder entire families. The only way he could look any weaker would be if he borrowed a pair of Graham's John Stockton hotpants. His development is stunted, with no explanation as to why he goes so batty. The only thing we get is his insistence on reading dirt rags and showing house guests homemade slideshows. The final confrontation, naturally between Graham and Dollarhyde, is so horribly cut together (with characters changing position in the middle of scenes due to new takes or cuts to change to stunt doubles) that it becomes humorous, which is not the emotion a viewer should have towards that kind of fight.

Look, I don't want to insult people who like this film, but I really just don't get what there is to like about this flick, and I can't help but scoff at the idea of this being superior to 'The Silence of the Lambs.' I mean, even the mismanaged 'Red Dragon' has the leg up on this flick. I know I upset more than a handful of people back in October of 2009 with the initial review of this film, but even two years and another two viewings later, I just don't get it. I don't see the appeal of this film, and I'm starting to think I never will.

'Manhunter' debuted on Blu-ray in 2009 as a part of the three film 'Hannibal Lecter Collection' alongside the already released 'The Silence of the Lambs' and 'Hannibal.' While 'Hannibal' got a standalone release in early 2011 exclusively at Best Buy, 'Manhunter' was only available in the three film set until this release from MGM bowed.

The BD50 disc itself is identical to the one in the three film set. The generic white art, the same numbers under the disc, the static, silent menu, and so on, all the same. 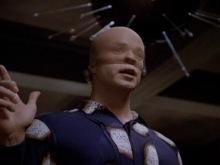 'Manhunter' is presented with an AVC MPEG-4 encode at 1080p, spread out across a BD50 with no other supplements, easily looking the best of all three films in this release. I remember watching the "director's cut" of the film on the Anchor Bay release, and being astonished at how horrendous it looked. This transfer wipes that painful memory aside.

Colors are amazingly bold and rich, and nowhere near as neon as I remember. This may be due to some changed color timing, but the result is much more befitting of the film, especially in the series. Skin tones are natural throughout the entire film, and facial features boast amazing clarity and depth, with pores and blemishes leaping right off the screen, begging for some astringent.

Detail is sharp, both in clothing patterns and fabrics and in foreground environments (backgrounds remain a bit out of focus), an amazing development considering how strong (though amazingly stable) the grain level is. Edges are sharp and clean, DNR doesn't appear to be an issue ever, and aliasing is also absent, even in Lecter's slicked back black hair. Artifacts are nowhere to be found, either, but there are some scenes littered with noise.

Blacks are amazingly deep, with about average delineation (nothing to write home about, or cry foul over), while whites remain clean. Shots of sunsets are the lone remnant of the neon coloring in the film, and stand out as such, like the sky were clubbin'. 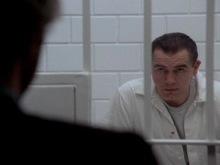 Presented by way of a DTS-HD Master Audio 5.1 mix, the film's sound design is as limited by the source as the film is by the acting. Ouch.

The proceeding is almost entirely focused from the front channels, focusing primarily on a clean presentation of the dialogue and soundtrack elements. The dialogue comes off very sharp, though nowhere near engaging, while the '80's rock and pop can sound a bit blurry, blended into itself, losing a bit of clarity, especially in the Strong as I am song from The Prime Movers. There's a nice bass element in the music for the film, but nowhere else, while the use of surround speakers could say the same, with a very light soundtrack bleed hitting the rears, but nothing else save for a brief moment of a helicopter throwing air through the channels.

This disc was barebones in 2009 and it still is today. 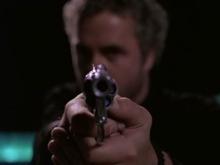 I took some heat in 2009 with my words of distaste for this film, and I'm sure I'll take some more again now that I'm going out of my way to reiterate my feelings with a mostly new review for the film. Fans love this film, and that's their right, and I can't take that away from them, but I'll be damned if I'll ever like this film. It was boring the first time I saw it, and it has only gotten worse over the years, with bad performances and awkward scenes standing out more than ever. MGM has finally put this film out on its own for those refusing to buy the box set, and the disc is the exact same as it was before, with very good video, and some average at best audio. Hardcore fans, you already should have bought the box set, but for those holding out, now's your chance.

Sale Price 19.99
Buy Now
3rd Party 39.99
In Stock.
See what people are saying about this story or others
See Comments in Forum
Previous Next
Pre-Orders
Tomorrow's latest releases