As with its predecessors, Maze Runner: The Death Cure is a well-executed YA adaptation and adequately entertaining, and the final entry culminates to a strong, satisfying conclusion of the series. The third installment races to Blu-ray with a gorgeous video presentation, a DTS-HD soundtrack and a healthy selection of supplements, making the overall package Recommended.

Knowing this is their final entry in the dystopian sci-fi trilogy, the filmmakers responsible for adapting the popular YA novel series go balls to the wall and to the hilt in Maze Runner: The Death Cure, starting with an unexpectedly thrilling rescue mission aboard a speeding train. Last we left the runaway kids, they found safe haven with rebel organization The Right Arm but were soon betrayed by one of their own, making captives of friends and nearly collapsing the resistance group. In the opening minutes of this second sequel, Thomas (Dylan O'Brien) has apparently moved up the ranks, taking a leadership role in the operation to save his friends despite previous entries leaving us to question his competency in such a role. He may eventually lead his team to an intended goal and destination, but it's never without extraneous difficulty and a great deal of mistrust, making his so-called successes more a result of dumb luck than as planned. And once again, his command rescues two familiar faces by chance but fails its main objective: saving Minho.

Granted, mistakenly leaving Minho (Ki Hong Lee) behind is really the catalyst and central point of the whole script, written by T.S. Nowlin, who is also responsible for the first two movies and served as co-writer on Pacific Rim Uprising. However, it all feels a bit too convenient, a seemingly random coincidence giving the protagonists (O'Brien, Thomas Brodie-Sangster and Dexter Darden) an excuse to carry out another rescue attempt that quickly spirals out of control yet coincidentally works in the hero's favor. It's almost as if the filmmakers were solely relying on coincidences for moving the plot along, perhaps something along the lines of bumping into an old friend from the Glades previously thought dead (Will Poulter). By sheer chance, he is also part of a rebellion faction just outside the walls of Last City, the final stronghold of the WCKD organization responsible for imprisoning and testing on the kids. And of course, he also knows a secret entrance and the key to rescuing Minho: backstabbing, morally-ambiguous Teresa (Kaya Scodelario). 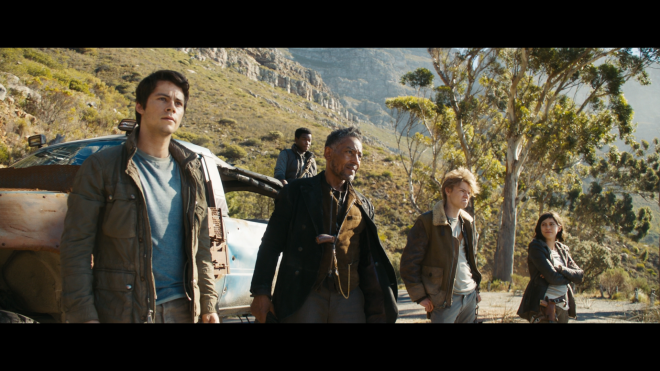 20th Century Fox Home Entertainment brings Maze Runner: The Death Cure to Blu-ray as a two-disc combo pack with a flyer for a Digital HD Copy. The dual-layered Region A locked, BD50 disc sits comfortably opposite a DVD copy inside a blue, eco-cutout keepcase with a glossy slipcover. After a few skippable trailers, viewers are taken to the main menu screen with full-motion clips, the usual options along the bottom and music playing in the background.

The third installment in the sci-fi action series escapes death with a marvelous, near-reference 1080p/AVC MPEG-4 encode that screams with an interestingly sullen yet eye-catching picture. The most fascinating aspect is Gyula Pados' weirdly captivating photography engulfed in an orange-teal palette that slightly skews the rest of the colors. Any scene outside the Last City or involving the resistance fighters is flooded in warm, hearty yellows and earthy browns, such as the hot desert scenery or inside the small rebel city. But conversations involving WCKD officials and their research facility are drowning in cold, steely blues, making it very clear who the cold-hearted villains are. While glowing, animated primaries supply the super-serious and brooding YA flick with some life, brightness levels deliver intensely rich blacks in the clothing and shadows, providing the 2.40:1 image with appreciable dimensionality and a welcomed cinema quality.

With spot-on contrast, the HD video is consistently vibrant and energetic with crisp, brilliant whites throughout, allowing for outstanding clarity in the far distance. Occasionally, some of the brightest sections, such as lamps and other sources of light, come off a tad strong and consume the finer details, but that seems like the result of the cinematography and doesn't happen too often. Nevertheless, the freshly-minted transfer comes with outstanding definition and resolution, revealing the tiniest object in the background, from the clean, distinct lines along the concrete walls of Last City to the rust scratches of the rebellion base. Viewers can plainly make out the stitching of clothing or individual pebbles on the desert floor, and facial complexions appear healthy with excellent lifelike textures, exposing every wrinkle and negligible blemish.

The race to find a cure to death screeches and howlers to home theaters with a fantastic DTS-HD Master Audio 7.1 soundtrack, filling the entire room with the thrill and excitement of running from the infected. In truth, the track isn't quite as enveloping and consistently absorbing as the previous two entries, but the design holds its own splendidly well, delivering a variety of atmospherics that move between the surrounds smoothly. The tunnel scene and the final third act are an awesome highlight, as screams, gun blasts and and explosions echo all around. There are a couple times throughout when the helicopter-like blades of the aerial vehicles are distinctly heard in the sides and rears. But on the whole, the movie comes with a good deal of silence during the more dialogue-driven scenes, which is then offset by the sudden bursts of action.

Along the front soundstage, the design is far more satisfying and engaging, kept busy with lots of background activity. Various effects discretely move across all three channels evenly and fluidly, generating an awesomely wide and spacious image. An outstanding mid-range delivers superb detailing and clarity, allowing the listener to hear every grinding crunch of metal on metal, the distinct throaty shriek of the infected and the ear-piercing blasts of explosions. Amid the chaos and commotion, dialogue remains top priority and precise in the center. Slightly disappointing is a low-end that mostly hovers in the upper mid-bass levels, which still delivers an adequate punch and weight to the action but can also dig much deeper given the on-screen visuals. The bass may not energize the room in any particular standout way, but overall, the lossless mix is very satisfying with plenty of force behind it.

All the same supplements are shared with its day-and-date 4K counterpart, which can be read in more detail in our 4K Ultra HD Blu-ray review HERE.

The filmmakers responsible for adapting the popular YA novel series go balls to the wall and to the hilt in Maze Runner: The Death Cure, bringing the franchise to a large, blockbuster-like, explosive finale. With the same cast of the previous two entries reprising their roles, the third installment delivers the visual thrills and excitement to maintain interest but not much else thanks to a script that arrives at a conclusion by sheer luck. The dystopian sci-fi sequel finds sanctuary on Blu-ray with a marvelous video presentation and a fantastic DTS-HD soundtrack. With a healthy collection of supplements to boot, the overall package is recommended for both fans of the franchise and those who've already invested time on the first two movies.

Sale Price 14.74
List Price 19.99
Buy Now
3rd Party 8.18
In Stock.
See what people are saying about this story or others
See Comments in Forum
Previous Next
Pre-Orders
Tomorrow's latest releases