When you consider the sheer volume of films produced each year, very few truly ingrain themselves in our cultural consciousness. 'Willy Wonka & the Chocolate Factory' is one that did. The children's fable about misbehavior and over-indulgence has been enjoyed generation after generation. From celebrated songs like "The Candy Man" and the "Oompa-Loompa" tunes, the film has amassed an immensely loyal following in its 38-year history. What started as a quickly dismissed fantasy tale about a candy maker and a group of rotten kids has now become a classic.

It's an endearing but darkly comedic parable in the tradition of the Brothers Grimm, where five lucky contestants win more than a mere tour of a lifetime. They also receive their just desserts for their appalling and obnoxious behavior. Growing up with the film and watching it on television, 'Wonka' seeped into the imagination of children as both a fantastical wish-fulfillment of edible delights and a bizarre nightmare of gluttony and selfishness. And like a true fairytale, the narrative reveals itself as a cautionary anecdote for contemporary children, such as the spoiled Veruca Salt and the competitive Violet, and even forewarns the effects of technology, as with the television-obsessed Mike Teevee.

Upon its initial release, the strange and wacky world of Willy Wonka's factory and the lessons imparted on each child didn't make much of an impression on audiences, and it bombed at the box office. In fact, the story's author Roald Dahl, who wrote the first original draft to his 1964 novel, was so disappointed with the final product that he refused to ever watch it and quickly turned down offers for adapting the sequel: Charlie and the Great Glass Elevator. It wasn't until years later, with Warner Bros. purchasing distribution rights and repeated showings on television throughout the 1980s, that 'Willy Wonka' finally garnered more serious attention.

Today, the film is seen as an undeniable children's classic and appreciated better for its unique and imaginative visuals, which camouflage and shadow its gloomier aspects. It's a wild trip through the unusual imagination of a grown man who refuses to ever grow up, and it's all thanks to Gene Wilder's performance, seen by some as his very best work, that this wacko is such a likable character. Dishing out quotes from Shakespeare, Oscar Wilde, and Samuel Taylor Coleridge's "Rime of the Ancient Mariner" as if it made any sense to the kids, or at least it should, Wilder creates such an air of charm and personality, you almost wish the character were real. Ultimately, Gene Wilder IS Willy Wonka.

With Harper Goff, on loan from the Walt Disney Company, creating some of the wildest set designs seen on screen, director Mel Stuart guides us through this demented and fantastical experience of childhood invention. While cunningly imparting younger viewers with some easy to swallow life-lessons, 'Willy Wonka & the Chocolate Factory' remains an adventure fairytale that scares you silly and amuses the young of heart with its eccentricity. It's a must-see for everyone in the family. 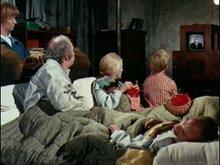 Comparatively speaking, this new Blu-ray version of 'Willy Wonka & the Chocolate Factory' is practically identical to the previous HD DVD release as well as the previous Blu-ray. However, upon closer inspection, it appears this 1080p/VC-1 transfer has been tidied up a bit more, with less visible specks and dirt.

Despite a few random, but expected scenes of softness, the film looks terrific in high-def and awash in film grain, giving it a nice cinematic texture. Special effects sequences and low-lit scenes display a much heavier grain structure, but it's nothing detrimental. Fine object detailing is strong for a picture of this age, and contrast is well balanced, exposing a great deal of visual information in the background. Black levels are spot-on and very deep for the most part, but the image generally remains flat throughout. The color palette receives the most immediate improvement and renders warm, accurate facial complexions. Once inside the Wonka factory, richly saturated reds and greens are abundant, while secondary hues are lush and vibrant.

Overall, this is a fantastic-looking presentation of a great classic.

In the audio department, Warner offers one definite upgrade from the HD DVD version in this Dolby TrueHD soundtrack, albeit the difference is very minor.

Although labeled as five-channel surround sound, in reality, there is only so much that can be done with a sound design originally recorded in monaural. Nonetheless, engineers have done excellent work with the front-heavy mix, expanding it from a one-channel production to a warm and welcoming stereo presentation. The front soundstage exhibits well prioritized and intelligible vocals, while the music feels expansive and engaging. Dynamic range is also wide and cleanly delivered. Low-frequency bass and rear activity is practically non-existent, save for some very trivial echo effects.

All in all, the lossless track of 'Willy Wonka' sounds wonderful on Blu-ray.

The Ultimate Collector's Edition has been limited to 100,000 copies and contains physical supplements. The best being the out-of-print 2002 book Pure Imagination: The Making of Willie Wonka and the Chocolate Factory by director Mel Stuart and Josh Young, which details the film's creation and its legacy.

Also included are reproductions of correspondence related to the film, include a casting list for Willy with Danny Kaye and Peter Sellers considered, letters to cast members from production, and a handwritten note from Gene Wilder, and a Wonka Bar replica tin that contains four pencils and an eraser that are scented. A few buyers will enjoy Wonka's Golden Ticket, which offers a code to enter a contest where Five Grand Prize winners will win a trip for two to Los Angeles, two tickets to the Warner Brothers VIP Studio Tour, and $1,000. Forty runner-ups will win a collectible reproduction of the original movie poster.

The Blu-ray and DVD of the film both contain the following features:

The DVD of the film contains a couple of other minor features: 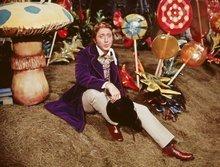 'Willy Wonka & the Chocolate Factory' remains a classic, a timeless tale that's sure to appeal to both children and adults. Gene Wilder is masterful as Wonka, and the child actors deliver very good performances. Wonka's factory is so vivid and memorable a place the land of Oz is its only cinematic rival.

Since the Blu-ray has been available before, the main selling points of the Ultimate Collector's Edition are the physical supplements and the brief Mel Stuart's Wonkavision. The 45 prize winners will certainly find the cost well worth the investment considering the return they will be getting. The remaining 99,000-plus will have to take into account their level of Wonka fandom to best determine the set's worth.

Sale Price 59.95
List Price 64.99
Buy Now
3rd Party 41
In Stock.
See what people are saying about this story or others
See Comments in Forum
Previous Next
Pre-Orders
Tomorrow's latest releases