All the Money in the World

The ghost of Kevin Spacey may haunt All the Money in the World, but director Ridley Scott’s captivating take on the notorious Getty kidnapping case remains a fine movie that’s distinguished by a solid script and excellent performances. High-quality video and audio transfers and a few slick supplements heighten the appeal of Sony’s Blu-ray presentation, which earns an enthusiastic recommendation.

When a series of explosive sexual misconduct allegations leveled against actor Kevin Spacey threatened to derail the upcoming true-life thriller All the Money in the World, director Ridley Scott and his band of producers took drastic action. Just 47 days prior to the movie’s Christmas Day release, Team Scott dumped Spacey’s footage, recast the pivotal role of J. Paul Getty (Christopher Plummer got the plum part), and reshot a whopping 22 scenes in only eight - that’s right, eight! - days. The audacious and admirable move most certainly salvaged the film, but also instantly transformed a straightforward thriller about the notorious kidnapping of 16-year-old John Paul Getty III in 1973 into a cinematic poster child for the #metoo movement. And all the quality in the world couldn’t keep All the Money in the World out of that glaring spotlight.

Which is not totally a bad thing. When it comes right down to it, a social movement is more important than a piece of entertainment, so whether you feel the replacement of Spacey was warranted or not, the fact that Scott took a stand and found a way to keep his film viable and preserve the work of hundreds of professionals is commendable. And if that’s the legacy of All the Money in the World, so be it. I’m sure Scott wouldn’t quarrel with that.

Yet it is interesting how turbulent behind-the-scenes events can alter the perception of a film and keep it from being evaluated on its own terms. Without question, the narrative surrounding the production of All the Money in the World somehow eclipses the on-screen narrative. If you’re aware of it, it’s almost impossible not to be distracted by it. As good as Christopher Plummer is - and he’s very, very good - it’s difficult to remain completely focused on his portrayal. On more than a few occasions, I found myself wondering how Spacey might have played the same scenes, how he might have looked, and what kind of chemistry he might have created with the other actors. Because Spacey’s footage will most likely never see the light of day, I’ll never know, but I don’t think I’ll ever be able to watch All the Money in the World without those thoughts swirling around my brain. It’s just the nature of the beast.

And yet, in spite of all that, All the Money in the World still delivers the goods. It’s not one of Scott’s best movies, but it’s an elegant, often stellar effort that might have gained more artistic attention if the Spacey scandal hadn’t engulfed it. The titillating subject matter and fascinating characters fuel the film, and the exotic locations and gorgeous production design elevate its look, evoking the opulence that defined - and continues to define - the Getty name.

J. Paul Getty was at one time the richest private citizen in the world, amassing a colossal fortune, much of which stemmed from a lucrative deal he made with a Saudi king for rights to a barren plot of land that would soon yield copious amounts of oil. He was also a legendary tightwad and could never connect emotionally to other people. Art was his passion, and he spent lavishly on rare works. At one telling moment in the movie, Getty (Christopher Plummer) simply states, “There’s a purity to beautiful things that I’ve never been able to find in another human being.”

And that includes his children. So when his 16-year-old grandson, Paul (Charlie Plummer), is kidnapped in Rome by an arm of the Italian Mafia, Getty refuses to pay the multi-million-dollar ransom, claiming if he did so, he would invite an army of thugs to abduct his other 13 grandchildren. Paul’s mother, Gail (Michelle Williams), who divorced his irresponsible, drug-addicted father and refused alimony so she could have full custody of her children, is shocked (but not surprised) by the elder Getty’s coldness, yet her lack of financial means forces her to deal with him and his square-jawed right-hand man, Fletcher Chase (Mark Wahlberg), in a desperate attempt to get her son back before his kidnappers make good on their threats to kill him.

Scott weaves an often hypnotic spell, thrusting us into a surreal world of unimaginable wealth and ruthless power plays and, with a deft hand, he balances Paul’s horrific plight with his mother’s dogged perseverance and grandfather’s chilling detachment. Scott builds suspense well, despite a couple of slow stretches, and one harrowing torture scene just might eclipse all the chest-bursting gore that fills his Alien films. The script by David Scarpa brings all the characters to life, but the creative licenses taken with the story to heighten its impact are unnecessary. I’m always suspicious of movies that claim to be “inspired by” real events (I prefer “based on”; it wields more gravitas) because they tend to play fast and loose with the facts. All the Money in the World is no exception, but a few computer clicks reveal the Getty case to be dramatic enough on its own and not in need of embellishment or alteration.

All the actors embrace their roles, but despite the considerable buzz surrounding Christopher Plummer’s deliciously frigid performance, it’s Williams who impresses the most. (Though Plummer nails his portrayal and rightfully earned his Best Supporting Actor Oscar nomination, it’s a stretch to buy his work during flashback scenes as a far younger man.) Donning an intriguing accent and projecting equal parts concern, frustration, anger, and steely strength, Williams paints a dimensional portrait of a complex, somewhat mysterious woman who refuses to be marginalized, manipulated, or bullied. Wahlberg does what he can with a rather bland part, and Charlie Plummer (no relation to Christopher) contributes a fine turn as the cocky, privileged teen who discovers he’s not as worldly - or valuable - as he believes.

Scott’s movie stands on its own as a solid, engrossing thriller, and those who appreciate this legendary director’s superior craftsmanship will find much to like here. As time passes, there’s a chance we’ll forget the movie’s Kevin Spacey connection, but I wouldn’t bet on it. All the Money in the World is by no means the first film to be influenced by incidents of sexual harassment and assault, but it’s the first one to take visible action because of it. And that may well be its legacy. 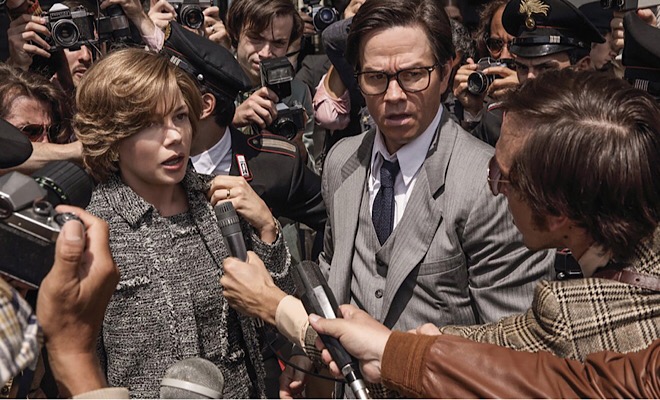 All the Money in the World arrives on Blu-ray packaged in a standard case inside a sleeve. A leaflet containing the code to access the Movies Anywhere digital copy is tucked inside the front cover. Video codec is 1080p/AVC MPEG-4 and default audio is DTS-HD Master Audio 5.1. Once the disc is inserted into the player, the static menu with music immediately pops up; no previews or promos precede it.

It's too bad there isn't - as of yet - a UHD release of All the Money in the World, because this strikingly crisp 1080p/AVC MPEG-4 transfer from Sony would look even more beautiful in that format. This superior Blu-ray rendering, however, will certainly suffice until a 4K edition comes along, thanks to its dazzling clarity, pitch-perfect contrast, and slick yet organic look. Despite its often cold, muted appearance (which reflects the characters’ emotional detachment), the image seems very film-like, exuding a palpable texture that complements both the ornate interiors of the Getty mansion and numerous locations. Color is used sparingly, but it pops with intensity when necessary. Black levels are deliciously lush, whites are bright but never bloom, and flesh tones remain natural and stable throughout. The weave on Wahlberg's seersucker jacket is razor sharp, and the fine details on all the decorative Getty treasures come through cleanly. Excellent shadow delineation keeps crush at bay most of the time, and marvelous close-ups showcase every facial wrinkle and blemish, out-of-place hair, and scraggly beard. Not a single speck mars the pristine source material and no digital doctoring could be detected. Sony scores with a fantastic transfer that immerses us in the drama and always keeps the eye engaged. It may not look like all the money in the world, but it sure looks like a million bucks.

Clear, well-balanced sound with a high degree of detail distinguishes the DTS-HD Master Audio 5.1 track. Seamless bleeds to the rear speakers enhance sporadic surround effects, but the front channels really shine, providing an expansive soundscape that draws us into the on-screen drama. A wide dynamic scale handles all the highs and lows without a hint of distortion, and strong, well-integrated bass frequencies supply necessary weight. Gunfire, clicking cameras, revving car engines, barking dogs, chirping birds, and especially a mass of buzzing buzzards are all marvelously distinct, superior fidelity and tonal depth helps Daniel Pemberton‘s music score to fill the room with ease, and all the dialogue is easy to comprehend. This is a first-rate track that really heightens audience involvement through subtlety, not bombast.

A few supplements enhance this Blu-ray release. An audio commentary from Ridley Scott that would really go in depth about the film’s dramatic production and the scandal that rocked it would have added immeasurably to the presentation, but is sadly not included.

Deleted Scenes (HD, 7 minutes) - All eight excised scenes were well left on the cutting room floor. A few supply extra bits of atmosphere or irony, but none are essential to the film’s plot or cohesion.

Featurette: “RIdley Scott: Crafting a Historical Thriller” (HD, 9 minutes) - What begins as a fawning testimonial to Scott by myriad members of the cast and crew evolves into a standard making-of piece that examines Scott’s distinctive style and methodology and the film’s locations, costumes, scoring, and cinematography. Lots of behind-the-scenes footage enhances this slick, all-too-standard featurette.

Featurette: “Hostages to Fortune: The Cast” (HD, 10 minutes) - Williams, Wahlberg, Christopher and Charlie Plummer, and Romain Duris - with occasional interjections from Scott - all discuss their respective characters and how they researched, crafted, and identified with them. They also analyze their personalities and motivations in this breezy piece.

Featurette: “Recast, Reshot, Reclaimed” (HD, 5 minutes) - Though not as interesting or frank as one might hope, this brief featurette examines the frenetic reshoot of 22 scenes in eight days after the “unanimous” decision was made to recast the role of old man Getty just 47 days before the movie’s release. The challenges of scheduling and replacing existing footage without disrupting other elements of the film are discussed, and we also hear how Williams, Wahlberg, and Plummer approached the unusual situation. Quite tellingly, Kevin Spacey’s name is never mentioned In the featurette.

The infamous Getty kidnapping case gets an absorbing and suspenseful treatment in All the Money in the World, but at times, the true-life scandal that rocked the film’s production overshadows director Ridley Scott’s stylish drama. Christopher Plummer may grab the headlines for replacing Kevin Spacey at the 11th hour, but Michelle Williams steals the spotlight with a near-perfect portrayal that infuses this tawdry tale with both strength and heart. Sony’s Blu-ray presentation features superior video and audio transfers and a few slick supplements, all of which enhance this meticulously crafted movie that searingly depicts the dark side of wealth. Recommended.

Sale Price 7.4
List Price 14.99
Buy Now
3rd Party 4.99
In Stock.
See what people are saying about this story or others
See Comments in Forum
Previous Next
Pre-Orders
Tomorrow's latest releases