A grand, flamboyant spectacle of oddities and curiosities, The Greatest Showman is a surprisingly and freakishly delightful fantasy based on the life of P.T. Barnum and his road to creating his legendary circus. The sideshow attraction rushes to the Blu-ray stage with a reference-quality audio and video presentation and a great assortment of supplements, making the overall package Highly Recommended.

Brushing aside several historical inaccuracies while avoiding other disconcerting details that might disturb moviegoers — look no further than the sad, exploited lives of Joice Heth and Charles Sherwood Stratton for more — The Greatest Showman is, on the whole, a splendidly extravagant and exhilarating musical drama. Directed by Michael Gracey, the film is also pure fantasy, condensing decades in the life of P.T. Barnum (a charmingly dynamic Hugh Jackman) into a matter of a few years. This means key events in Barnum's road to becoming the king of the circus, museum exhibitions and a purveyor of biological curiosities are shifted around or greatly exaggerated in order to achieve a specific goal. That goal amounts to little more than a feel-good tale about realizing one's dreams, lauding diversity and finding joy in our differences. Or, as a cold, uncaring critic realizes, "a celebration of humanity." In that respect, the production accomplishes its intended objective effectively and satisfyingly, uplifting the spirits of this unsmiling critic.

And isn't that precisely the reason we go to the movies in the first place, to escape the ordinariness of reality and enter an unfamiliar world for a short while where we dismiss from our minds other concerns. We gladly and willingly pay our hard-earned money, as Jackman's Barnum astutely points out, for the privilege to be hoodwinked, hoaxed and deceived. It's a perplexing and paradoxical desire — perhaps, even a deep-rooted, innate need — to be lied to in such a unique way it makes the real world just a tad more interesting and fascinating. We find a great deal of enjoyment in voluntarily allowing ourselves to be fully immersed in the verisimilitude, in the possibility of the strange, macabre and extraordinary being real or actually happening in the way the story is being told to us. Gracey's film provides audiences with a fanciful, romanticized invention of a man who understood our appetite for suspension of disbelief decades before motion pictures fulfilled such cravings. The art of lying is in receiving pleasure from satisfying an audience's indulgences. 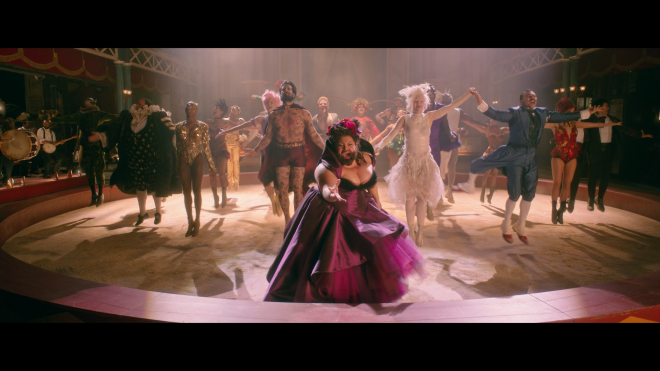 20th Century Fox Home Entertainment brings The Greatest Showman to Blu-ray as a two-disc combo pack with a flyer for a Digital HD Copy. The dual-layered Region A locked, BD50 disc sits comfortably opposite a DVD copy inside a blue, eco-cutout keepcase with glossy slipcover. After a few skippable trailers, viewers are taken to the main menu screen with full-motion clips, the usual options along the bottom and music playing in the background.

The fantasy musical drama sets the stage for a stunningly gorgeous 1080p/AVC MPEG-4 encode, instantly bursting onto the Blu-ray arena with an infectious exuberance and a spirited brilliance. Practically every scene gushes with a sumptuous array of colors, as primaries bathe the screen with resplendent reds, lively greens, and electrifying blues. Meanwhile, the performances and musical numbers are permeated in lush, enthusiastic secondary hues, from the bright golden hues of the stage lights and the soft pastels of the period clothing to Anne Wheeler's beautiful lilac, violet costume, and her dazzlingly intense pink hair. The picture also comes with brilliant, pitch-perfect contrast throughout, displaying gloriously crisp, sparkling whites, making the fancy, button-down shirts look particularly clean and splendid while the brightest lights gloriously shine without washing away some of the finer areas.

Arguably, the best aspect of this freshly-minted transfer is the luxurious, inky-rich blacks, which are consistent from beginning to end. Brightness levels are so on point and precise that the darkest shadows in the background never overwhelm or obscure the tiniest object while penetrating deep into the screen, providing the 2.40:1 image with an extraordinary three-dimensional quality that brings the song & dance numbers to life. Shot entirely on Arri Alexa digital cameras, every minute detail is exposed, even within the darkest, poorly-lit corner of the frame. Viewers can make out each individual brick in the various buildings, the smallest imperfection and crack inside Barnum's museum, and the teeny-weeny, out-of-place pebbles on the cobblestone roads. The threading and stitching in the costumes are striking, and each hair, from The Dog Boy and Lettie Lutz to the perfectly combed hairdos of Jackman and Efron, is distinct. Facial complexions appear natural with outstanding lifelike textures, making this presentation pure demo material.

The surprisingly entertaining sideshow attraction is accompanied by an outstanding and fantastically engaging DTS-HD Master Audio 7.1 soundtrack that will immediately suck viewers in within the first opening scene.

In fact, the film begins with a loud and bombastic musical number that fills the entire soundstage, instantly establishing an expansive and richly-layered sense of space. The mid-range is absolutely extraordinary and extensive, exhibiting clean separation and distinction in the highest frequencies without ever faltering and with such room-penetrating clarity, that one can't help but suddenly feel as in front of a live stage performance. The listener can cleanly make out every instrument in the orchestration and appreciate each individual note, generating a highly-engaging wall of sound that's truly sensational. Amid all the hubbub and infectious excitement, vocals maintain exceptional clarity and precision.

Most impressive, as well as shocking, is an unexpectedly thunderous low-end sure to shake anyone's home theater with some serious oomph and impact. Not only does the bass hit hard during the many songs and few action sequences, providing them with excellent presence, but some of those same musical numbers come with several surprising hits that dig deep into the ultra-low depths with authoritative force, reaching down as low as 13Hz in a couple places at high decibels (bass chart). Those with the power and equipment to enjoy are in for a fun ride but might consider warning the neighbors first.

The only area that feels somewhat lacking is the surrounds. That's not to say, the design doesn't come with some amusing moments of rear activity, a few sporadic effects that discretely pan between the channels. However, they are few and far between, and that entire area appears mostly reserved for the music performances, which in that respect do well in creating a satisfyingly immersive soundfield. The issue is with the fact that much of the plot takes places in the middle of a large cosmopolitan city or during a circus show, and with that in mind, the room tends to feel pretty silent for big chunks of the runtime. Nevertheless, the front soundstage more than makes up for that lack, and lossless mix is simply marvelous and absorbing.

All the same supplements are shared with its day-and-date 4K counterpart, which can be read in more detail in our 4K Ultra HD Blu-ray review  HERE.

Much like P.T. Barnum himself, The Greatest Showman hoodwinks moviegoers with a whopper of a fantasy, thrilling them with flamboyant spectacle and an imaginative fairytale that inspires. Starring Hugh Jackman, Zac Efron and Michelle Williams, the musical drama hits a few snags during the show, but the overall performance is freakishly entertaining and delightful, finishing strong in the end. The Blu-ray rushes to the HD stage with a gorgeous, demo-worthy video and a reference-quality DTS-HD MA 7.1 soundtrack that'll have owners cheering, dancing and singing along with the characters. With a small but extensive and informative set of bonus features, the overall package is recommended for the whole family and the freaks who enjoy a good musical.