What more could be said of what is widely hailed as one of the greatest action movies of all time and almost universally considered one of the best sequels ever made? In the decades since it originally premiered in 1991, James Cameron's classic sci-fi actioner Terminator 2: Judgment Day has seeped itself into our cultural pantheon and the collective unconscious. Even if the unacquainted had never seen this masterfully entertaining film, young moviegoers have heard of it and are somehow familiar with its time-traveling plot. Some also know it stars action-legend Arnold Schwarzenegger as the titular killing machine sent from the future to protect a boy (Edward Furlong) destined to be someone of great importance. And, along with Steven Spielberg's Jurassic Park, it should also always be remembered as marking the beginning of the groundbreaking years in computer-generated imagery, heralding what would soon become a common practice in visual special effects and photography. After twenty-five years, it's surprising to see much of the work done back then remains as striking and fascinating as when I first experienced them in cinemas.

The production's continued success — the reason why the film endures decades later and why those CG effects still prevail as seamlessly as they do — is a plot driven by its characters and the unbeatable circumstances surrounding them. It is ultimately an engrossing story about a rebellious adolescent confronting a hostile, unsympathetic world and the sometimes-unbearable burden of the future weighing on his shoulders. Having come from the 80s era of "good consumer" and "living in excess" mindset, his mother Sarah (Linda Hamilton) is a darkly pessimistic cynic who sees a world on the brink of annihilation while John (Furlong) persists with some spark of optimism and a hope for humanity's future. Their contrasting personalities seem a fitting response to the period when a nation was about to transition from the Reagan-Bush era to the Clinton years. Uniting them is an unimaginable soul-crushing monster in the T-1000 (Robert Patrick), a seemingly invincible machine standing in the way of a better future, a modern Frankenstein-type creation that even the almighty, powerful Schwarzenegger wearily struggles to defeat. 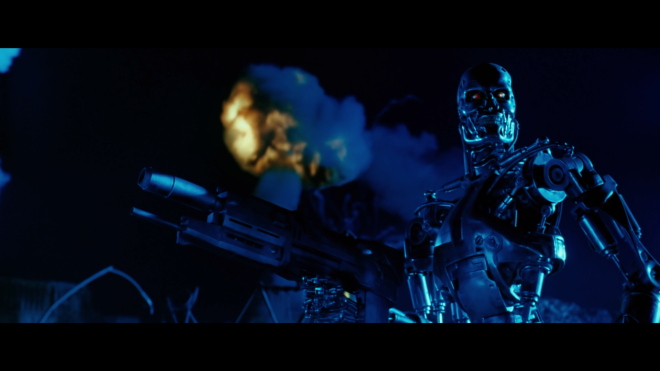 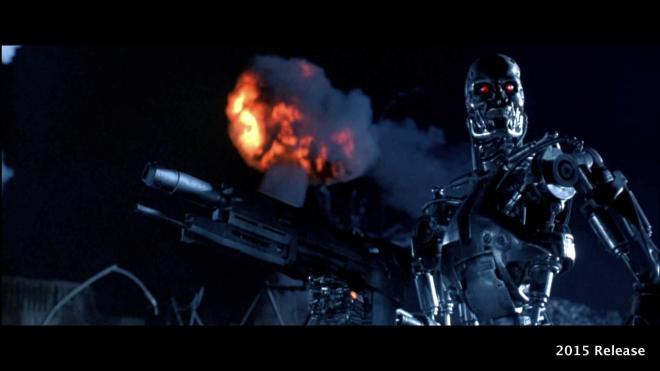 In the United Kingdom, Studio Canal brings Terminator 2: Judgment Day to Blu-ray as a single Region B locked, BD50 disc housed inside a black, slightly thicker than normal keepcase with a glossy slipcover. At startup, the disc goes straight to an interactive menu screen with music playing and full-motion clips.

Sadly, a North American release of the new 4K remaster on a standard, standalone Blu-ray has not been announced and may not happen at all. As of this writing, it will only be available as a bonus to the 4K Ultra HD package, so fans wanting only the Blu-ray copy will have to import from other territories. 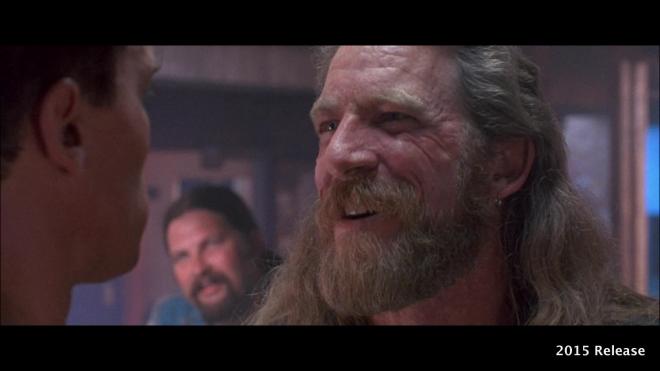 The epic battle for the future erupts on Blu-ray with a good-looking but slightly problematic 1080p/AVC MPEG-4 encode, struck from a brand-new 4K scan and restoration of the original camera negatives. However, similar to what is seen on the Ultra HD, those restoration efforts appear to be the aftermath of some overzealous tinkering and digital manipulation. Most egregious is clear evidence of noise reduction being applied, sometimes very light and forgivable while at other times, excessive and horridly distracting. In a few areas, faces are noticeable smooth, such as when a naked T-800 walks into the dive bar and later snags the shotgun before stealing a motorcycle. One of the worst moments is the therapy session between Sarah and Dr. Silberman where the unsightly face of the psychiatrist not only makes him looks like a wax figurine but also like the unfortunate result of a Botox experiment gone wrong. The DNR may not be Predator levels of atrocity, but it is nonetheless bad and disheartening for an action classic. On top of that, there are also several instances of aliasing and moiré effects along the sharpest edges and in light fixtures.

Overlooking this disappointing aspect, the new 4K digital intermediate does offer some notable positives and upgrades in the software, which should affirmatively please fans. Undoubtedly, the HD presentation delivers sharp, highly-detailed definition, showing great detailing in the clothing, animatronics, and various practical effects. Granted, there are a few softer, poorly-resolved moments sprinkled throughout, many of which are seen during low-lit interiors, in some of the CG work and other minor areas related to the original photography. Nevertheless, the tiniest stitch and wrinkle in Schwarzenegger's leather jacket are clear and well-defined while individual hairs in the T-1000's perfectly combed haircut are always distinct, and the smallest trinket, object and piece of furniture in the Cyberdyne office is plainly visible. Overall, this new 1080p transfer easily out-classes the previous 2015 release in terms of definition and resolution by a significant margin, making it the best the dearly beloved action sci-fi sequel has ever looked on any format.

Of course, appreciation for the results will vary based on viewers choosing to ignore or forgive the amount of noise reduction sporadically applied throughout. As mentioned in the review of the UHD, the blatant use of DNR remains a bit of an issue because the original restoration effort was towards a 3D conversion, which owners are essentially warned about in a white-text screen at the start. Miraculously, it's not as egregious and distracting as it was on the 4K version, but it was also a problem in the 2015 Blu-ray, which frankly, was not a good transfer either. Nevertheless, this much-improved transfer shows better, natural-looking facial complexions with sometimes extraordinary lifelike textures, exposing the most trifling blemish and pore during the best-looking close-ups. Interestingly, when watching the "Extended Special Edition," which inserts the untouched, "as-is" deleted sequences into this new presentation via seamless branching, owners have the opportunity to compare the differences and perhaps even imagine what could've been without DNR.

But continuing on the positives, the high-def video displays crisp, generally spot-on contrast with relatively clean and brilliant whites, but there are times when it falls flat. Most of this is arguably related to the early CG visual effects, but it is more likely the result of the original color timing having been changed to a steelier blue and the ever-popular (but subjectively unattractive) orange-teal palette. Again, when watching the "Extended Special Edition," owners can compare the difference of the original warmer look in Adam Greenberg's photography versus this colder exhibition approved by Cameron. For the most part, this isn't a completely disheartening issue, but it comes with a few hot spots, introducing a bit of blooming that ruin the finer details. Colors seem slightly affected by the change, but primaries remain accurately rendered and a tad richer, though faces sometimes appear flushed and pale on occasion. The biggest improvement are the brightness levels, providing the image with rich, midnight blacks and a lovely cinematic appeal. And shadow detailing remains strong, which comes in handy during the climactic fight sequence in the steel mill. 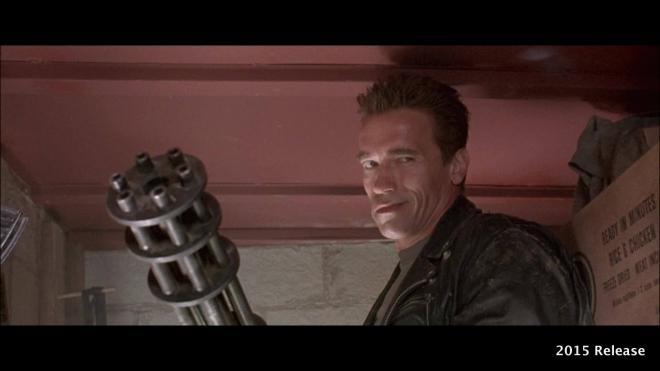 The same remastered lossless audio options enjoyed on the 4K Ultra HD and standard Blu-ray are also offered on the 3D Blu-ray disc — a pair of highly enjoyable and satisfying DTS-HD Master Audio 5.1 soundtracks, one in the original English while the other in French, and third German DTS-HD 7.1 track.

For a more in-depth take on the audio quality, you can read our review of the 4K Ultra HD HERE. 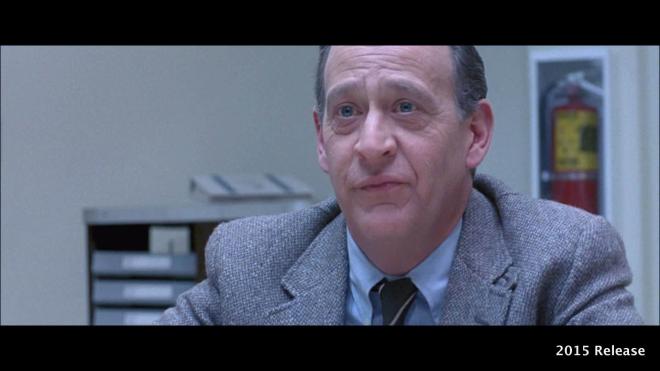 All the same supplements are shared between the three high-def formats, which can be read in more detail in our review of the 4K Ultra HD HERE. 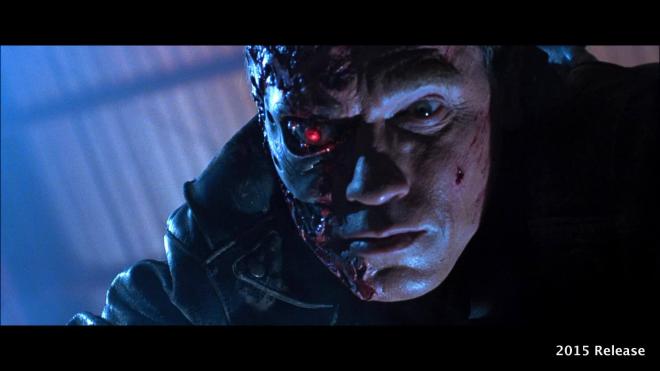 James Cameron's classic sci-fi actioner Terminator 2: Judgment Day is widely hailed as one of the greatest action movies of all time and universally considered one of the best sequel ever made. Added to that, the film's legacy and lasting impact marks the beginning of the groundbreaking years in computer-generated imagery, heralding what would soon become a common practice in visual special effects and photography.

The Blu-ray comes from the United Kingdom courtesy of Studio Canal with a highly-detailed if also somewhat problematic HD transfer made from a new 4K remaster of the original elements. It's sure to please some but greatly disappoint others. A new DTS-HD MA 5.1 lossless mix doesn't really sound that much different than what's already been heard on previous home video editions, and a small set of the same supplements are ported over, joined by a brand-new retrospective. Without a word of a North American standalone Blu-ray release coming anytime soon, this UK import is recommended for loyal, more forgiving fans of the action classic with access to a Region B and/or multi-region Blu-ray player.