What more could be said of what is widely hailed as one of the greatest action movies of all time and almost universally considered one of the best sequels ever made? In the decades since it originally premiered in 1991, James Cameron's classic sci-fi actioner Terminator 2: Judgment Day has seeped itself into our cultural pantheon and the collective unconscious. Even if the unacquainted had never seen this masterfully entertaining film, young moviegoers have heard of it and are somehow familiar with its time-traveling plot. Some also know it stars action-legend Arnold Schwarzenegger as the titular killing machine sent from the future to protect a boy (Edward Furlong) destined to be someone of great importance. And, along with Steven Spielberg's Jurassic Park, it should also always be remembered as marking the beginning of the groundbreaking years in computer-generated imagery, heralding what would soon become a common practice in visual special effects and photography. After twenty-five years, it's surprising to see much of the work done back then remains as striking and fascinating as when I first experienced them in cinemas.

The production's continued success — the reason why the film endures decades later and why those CG effects still prevail as seamlessly as they do — is a plot driven by its characters and the unbeatable circumstances surrounding them. It is ultimately an engrossing story about a rebellious adolescent confronting a hostile, unsympathetic world and the sometimes-unbearable burden of the future weighing on his shoulders. Having come from the 80s era of "good consumer" and "living in excess" mindset, his mother Sarah (Linda Hamilton) is a darkly pessimistic cynic who sees a world on the brink of annihilation while John (Furlong) persists with some spark of optimism and a hope for humanity's future. Their contrasting personalities seem a fitting response to the period when a nation was about to transition from the Reagan-Bush era to the Clinton years. Uniting them is an unimaginable soul-crushing monster in the T-1000 (Robert Patrick), a seemingly invincible machine standing in the way of a better future, a modern Frankenstein-type creation that even the almighty, powerful Schwarzenegger wearily struggles to defeat.

For a more in-depth take on the movie, you can read our review of the 4K Ultra HD HERE. 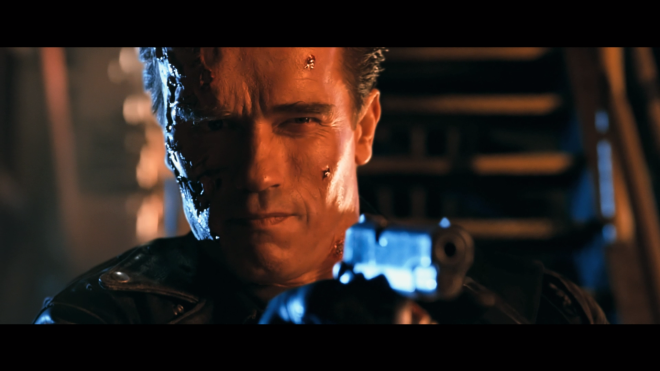 In the United Kingdom, Studio Canal brings Terminator 2: Judgment Day to 3D Blu-ray as a two-disc combo pack. The standard Region B locked, BD50 disc containing the 2D presentation and supplements rests on a blue center spindle while the Region B locked 3D Blu-ray sits comfortably on the opposing panel. Both are housed inside a black, slightly thicker than normal keepcase with a glossy slipcover. At startup, the disc goes straight to a 2D interactive menu screen with music playing and full-motion clips.

Sadly, a North American release of the Terminator 2 – 3D has not been announced and may not happen at all, so fans of the format will have to import a 3D version of the sci-fi action sequel.

Missing the 25th Anniversary mark by a year, James Cameron revisited the dearly beloved action sci-fi sequel and bestowed the original camera negatives with a brand-new 4K restoration. Those elements were then remastered for a new 3D conversion, which was shown theatrically in select cinemas this last summer. The results, I'm happy to report, are a spectacular and astonishing 1080p/MVC MPEG-4 encode, giving fans another reason to purchase the film yet again on home video. The extra dimension adds another layer to the story's thrilling action sequences and provides a substantially immersive effect to their enjoyment. In all fairness, some of the softer aspects of the photography, which mostly occur in the early CG visual effects, tend to flatten the picture slightly, but it's nothing too serious. And on occasion, there is some mild but visible crosstalk here and there, which might be more apparent and a nuisance on some screens. Nevertheless, the picture offers a wealth of 3D goodness for loyal fans of both the movie and the format.

The movie lacks the usual gimmick effects and cool camera tricks meant to startle and amaze audiences, which is understandable given its production year. It's really all about immersing viewers and pulling them further into the action and this universe of humans fighting against judgment day. However, there are a few moments that will take viewers by surprise, such as the barrel of guns breaking through the screen with astounding realism or when the police helicopter convincingly hovers and moves in midair. Separation between foreground and background objects is distinct and crystal-clear, often generating some amazing visual delights that penetrate deep into the backdrop. The hallways of the psychiatric hospital feel genuinely elongated with the other far end seeming beyond our distance, and there is a sense of space and partition in the offices of Cyberdyne while exterior shots impress with a grasp of scope and an open expanse.

With this coming from a new 4K digital intermediate, the high-def transfer provides a step up over its most recent Blu-ray counterpart, though not by a significant margin. Definition and fine objects are sharp and occasionally highly-detailed, showing great detailing in the clothing, the animatronics and various other practical effects. Of course, there are a few softer, poorly-resolved moments sprinkled throughout, many of which are seen during low-lit interiors, in some of the CG work and other minor aspects related to the original photography. Nevertheless, viewers can better make out the tiniest stitch and wrinkle in Schwarzenegger's leather jacket while individual hairs in the T-1000's perfectly combed haircut are always distinct, and the smallest trinket, object and piece of furniture in the Cyberdyne office is plainly visible. As mentioned in the review of the UHD, the blatant use of DNR remains a bit of an issue here although it miraculously doesn't appear as egregious and distracting. On the whole, facial complexions look natural with mildly lifelike textures, exposing the most trifling blemish and pore during the best-looking close-ups.

Even with the darkened glasses, the high-def video displays crisp, generally spot-on contrast with relatively clean and brilliant whites, but there are times when it falls flat. Most of this arguably related to the early CG visual effects, but it is more likely the result of the original color timing having been changed to a steelier blue and the ever-popular (but subjectively unattractive) orange-teal palette. For the most part, this isn't an issue, but it comes with a few hot spots, introducing a bit of blooming that ruin the finer details. Colors seem slightly affected by the change, but primaries remain accurately rendered and a tad richer, though faces sometimes appear flushed and pale on occasion. The biggest improvement are the brightness levels, providing the 3D image with rich, midnight blacks and a lovely cinematic appeal. And shadow detailing remains strong, which comes in handy during the climactic fight sequence in the steel mill.

The same remastered lossless audio options enjoyed on the 4K Ultra HD and standard Blu-ray are also offered on the 3D Blu-ray disc — a pair of highly enjoyable and satisfying DTS-HD Master Audio 5.1 soundtracks, one in the original English while the other in French, and third German DTS-HD 7.1 track.

For a more in-depth take on the audio quality, you can read our review of the 4K Ultra HD HERE.

All the bonus material can be enjoyed on the accompanying 2D Blu-ray disc, which also features the Theatrical, Special Edition and Extended Special Edition versions of the movie via seamless branching.

Audio Commentaries: Director James Cameron is joined by co-writer William Wysher for the first commentary track where the two talking passionately about the story and production. The second track was piecemealed together from various audio interviews of the cast & crew, sharing a variety of information on the technical aspects of the production and several anecdotes from the set.

Reprogramming (HD, 55 min): Brand-new documentary that is surprisingly candid, exhaustive and informative with recent cast & crew interviews reminiscing on the plot, production and the film's legacy.

Trailers (HD): A trio of theatrical previews are joined by the new T2: 3D trailer.

James Cameron's classic sci-fi actioner Terminator 2: Judgment Day is widely hailed as one of the greatest action movies of all time and universally considered one of the best sequel ever made. Added to that, the film's legacy and lasting impact marks the beginning of the groundbreaking years in computer-generated imagery, heralding what would soon become a common practice in visual special effects and photography.

The 3D Blu-ray comes from the United Kingdom courtesy of Studio Canal with a spectacular 3D conversion that amazingly adds another immersive experience to the film. A new DTS-HD MA 5.1 lossless mix doesn't really sound that much different than what's already been heard on previous home video editions, and a small set of the same supplements are ported over, joined by a brand-new retrospective. Without a word of a North American 3D Blu-ray release coming anytime soon, this UK import is recommended for loyal fans of the action classic as well as 3D enthusiasts who have access to a Region B and/or multi-region Blu-ray player.