The archetypal cul-de-sac spirals into manic hysteria in Joe Dante's hilarious cult classic The 'Burbs, a satirical allegory on Cold War tensions and a biting cynical look at suburban life that oddly feels as relevant today as ever. Shout! Factory welcomes the dark comedy favorite to the neighborhood as collector's edition Blu-ray with an excellent remastered video, fantastic audio and a healthy collection of supplements, making the overall package a Recommended addition to any cult library.

Suburbia is under attack by a shadowy, seditious presence threatening the status quo in Joe Dante's hilarious cult classic The 'Burbs, and it's up to the private citizens of an idyllic middle-class neighborhood to protect it. However, the threat isn't from a foreign power immediately forcing its oppressive rule via a violent overthrow, a popular thematic device and motif that infiltrated many action flicks of the 1980s. Instead, it springs forth from the paranoia and suspicion growing within the unrestrained imagination of the bored, purposeless residents of a quiet, perfectly manicured cul-de-sac. It's a fun twist to a prevalent theme that digs to a very real, commonplace sentiment about foreignness that understandably grew from Cold War tensions, a satirical allegory that draws battle lines right at the heart of the problem itself: a misunderstanding of those perceived as different, strange and other. Of course, by film's end, the bad vibes coming from an unusually creepy family are ultimately warranted, which is only in paying service to the film's horror elements while giving audiences one final ironic gag, but the central idea remains intact.

Working from a script by Dana Olsen (Memoirs of an Invisible Man, Inspector Gadget, George of the Jungle), Dante doesn't shy away from this fact and practically goes out of his way to make the point clear as day, virtually ensuring audiences wouldn't mistake his film for anything other than what it is. After opening with the Universal Studios logo of a turning world, the globe conveniently slows on North America, and the camera quickly zooms down the center before settling on the quiet, innocent neighborhood of Anywhere, U.S.A. It's an intentionally clichéd image of suburbia that suspiciously looks a lot like the street where The Munsters once resided and vampire Jerry terrorized horrorhound Charley, which in actuality is not the same set or location but only reflects back to the homogeneous, nondescript quality of the neighborhood. Dante immediately jumps to the plot's creepy aspect with everyman Tom Hanks as Ray Peterson, an average, blue-collar Joe wanting to spend his vacation at home with family, literally crossing into the unknown on a dark, windy night when next-door neighbors make a loud ruckus. 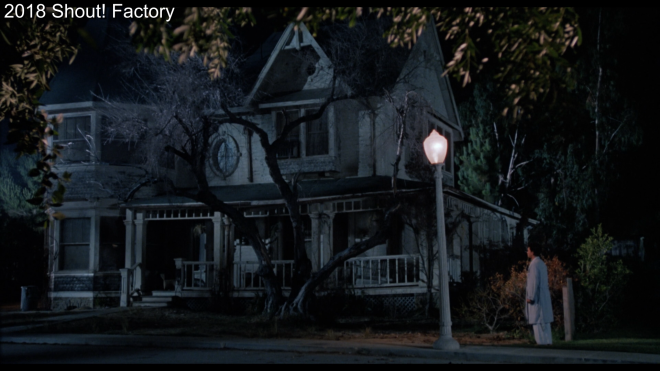 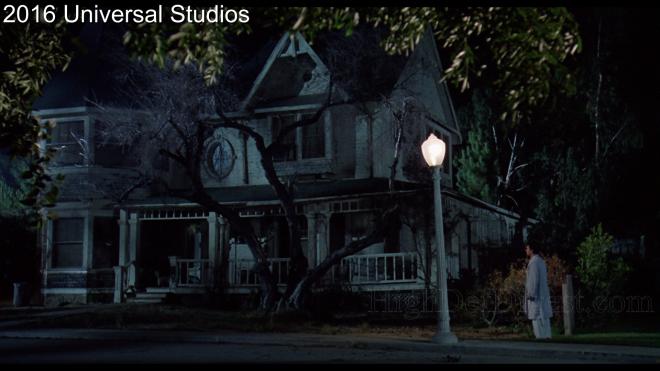 The next morning, we wake to more suburban truisms of a rude paperboy on a bike carelessly chucking newspapers while introducing the rest of the cast, starting with the curiously keen-eyed and hormonal teen Ricky Butler (Corey Feldman), who serves as our chorus-like observer and quasi-commentator. A very funny Rick Ducommun also stars as Ray's best friend Art, whose endless meddling in other's lives, as shown during breakfast when eating Carrie Fisher's cooking without so much as a please or a thank you, is the result of the apathy and monotony in his own life. Across the street, an equally hilarious Bruce Dern plays veteran Mark Rumsfield, a gung-ho patriot always itching for some action and finds it in his neighborly war with the old, prickly Walter (Gale Gordon) and his pesky dog. One of the production's more amusing aspects is showing Ray, Art and Mark's unwarranted mistrust of the one weird, spooky house with the unwatered lawn and dilapidated air as ultimately nothing more than a little boy's game, one that apparently goes too far and in need of Fisher's mediating, basically putting Hanks in a timeout.

The wickedly clever and delightfully charming black comedy romp toys with Cold War notions in the eccentric Klopek family, an uncommonly foreign name that suspiciously sounds Eastern European. Henry Gibson, Brother Theodore, and Courtney Gains are terrific in their roles, raising our own suspicions of them while still managing to carry a macabre, eerie air about them with Gibson doing marvelous as the mad scientist type and Theodore just being all around hair-raisingly menacing. Working carefully with cinematographer Robert M. Stevens, Dante displays a talent for balancing horror with comedy, which was first seen in Gremlins and most recently in Burying the Ex, without one overwhelming the other and maintaining an engaging story to the very end. During its original 1989 theatrical run, those tensions that influenced much of the plot were already starting to wane and the film was a moderate critical and box-office success. Over the decades, however, The 'Burbs has garnered a strong following amongst those who better appreciate its satirical take on suburbanites, making it a beloved cult classic.

Shout! Factory brings Joe Dante's The 'Burbs to Blu-ray as a single-disc Collector's Edition under the distributor's Shout Select line. The Region A locked, BD50 disc is housed inside a blue, eco-elite case with brand new reversible cover art and cardboard slipcover. At startup, viewers are taken to an animated menu screen with music. 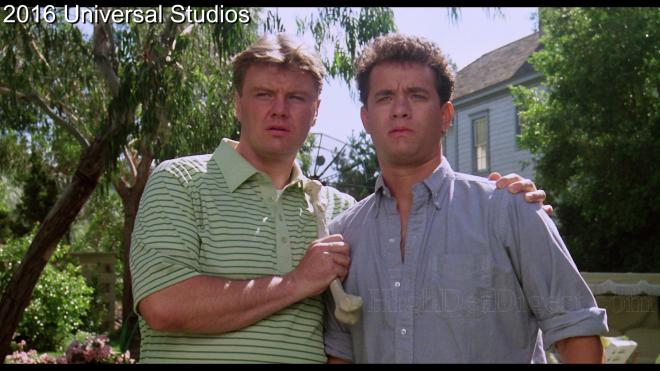 Shout welcomes cult enthusiasts back the neighborhood with a satisfying and great-looking 1080p/AVC MPEG-4 encode that was made from a new 2K resolution scan of the intermediate positive. The end result is frankly the best the movie has ever looked, besting both Universal's 2016 Blu-ray and Arrow's 2014 UK SteelBook. However, the movie comes with the same poorly resolved sequences and blurry moments as those previous releases, suggesting these issues are related to the condition and age of the source or inherent to the original photography. In either case, the dark comedy favorite has never looked better, showing a warmer color timing that feels more natural, and fans will be more than happy with the outcome.

Immediately apparent in daylight sequences, the presentation features excellent contrast balance, breathing new life into the neighborhood with a youthful, fantasy-like glow and crisp, brilliant whites in the clothing, houses and fluffy clouds. However, these are a couple instances suggesting that the contrast may have also been slightly boosted, just a tad, because a few hot spots tend to bloom and wash away some of the finer aspects. Thankfully, it's nothing too distracting or egregious, as black levels remain true and accurate with excellent shadow details in the darkest corners and poorly-lit interiors. As before, the colorful 80s palette benefits the most with richly-saturated primaries brimming with life and vitality while facial complexions appear healthier with slightly rosier lifelike textures. Awash with a very fine layer of natural grain that is more prominent during darker sequences, which is to be expected, the 1.85:1 image is not significantly sharper than its predecessor but still shows plenty of sharp definition in the clothing, houses and the whole neighborhood in general. 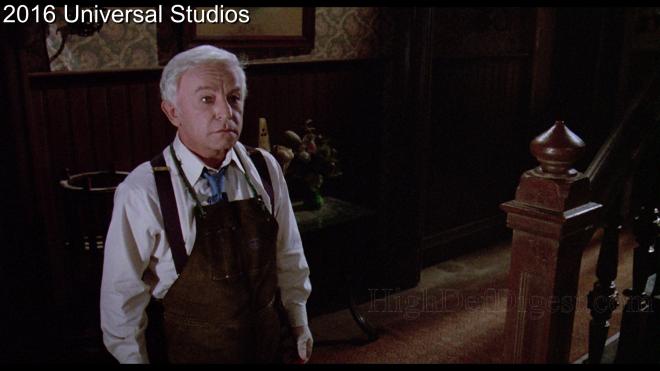 For all intents and purposes, the DTS-HD Master Audio 2.0 stereo soundtrack sounds identical to what was heard on the previous release, and my thoughts on its quality have not changed, which I'll repeat here.

Imaging is terrifically engaging almost right from the start and continuously active, creating a spaciously wide and expansive soundstage. The lossless mix also exhibits excellent differentiation between the loudest and quietest moments, maintaining outstanding clarity in the higher frequencies while still delivering warmth and richness in the mids. Various noises and the subtle ambient sounds of the neighborhood are spread across the entire screen with convincing effectiveness and fluid, flawless panning. Vocals are distinct and precise in the center, allowing for the Klopeks's Eastern European accents to come through with believable variation. The low-end is impressively ample and responsive, providing the high-rez track with a terrific weighty presence.

Best of all, the design lends itself marvelously to the receiver's Dolby Surround or DTS: Neural:X up-mixing functionality, expanding the soundfield with several amusing atmospheric effects spreading into the rears. The score benefits most from the upgrade, filling the screen with music that bleeds into the front height channels with discrete clarity in the instrumentation and superb separation within the mid-range. 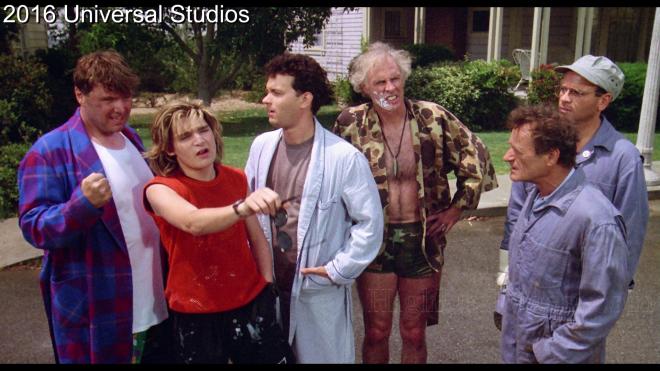 Audio Commentaries: Author and film critic Calum Waddell sits down with writer Dana Olsen to chat about the plot, the various themes, the performances and the overall production.

There Goes the Neighborhood (HD, 67 min): Ported over from the 2014 Arrow Video release and directed by Waddell, the making-of doc features recent cast & crew interviews sharing memories from the set.

Interviews (HD): A trio of new interviews commences with director Joe Dante (19 min) recollecting a few more details about the production and his thoughts on the movie's lasting legacy. This is followed with a series of questions asked of cinematographer John Hora (11 min) mostly sharing his thoughts on the movie. Finally, editor Marshall Harvey (10 min) is given a few minutes to also answer questions and impart some wisdom on his creative approach to editing a film.

Original Workprint (SD, 106 min): Taken from a VHS source that was borrowed from Joe Dante's personal archive, this alternate version of the movie features a few deleted and extended sequences.

Alternate Ending (SD, 7 min): The piece is a different take on Dr. Klopek trying to murder Ray in the ambulance and has him delivering a speech about the reasons for moving to the suburbs. 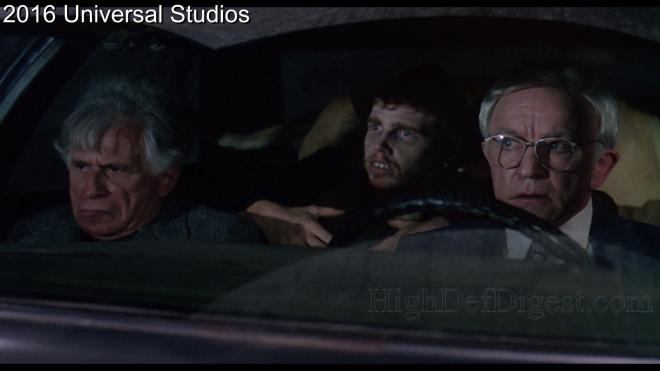 Suburbia is under attack by a shadowy, seditious presence threatening the status quo in Joe Dante's hilarious cult classic The 'Burbs, a satirical allegory on Cold War tensions and a biting cynical look at suburban life. Starring Tom Hanks, Carrie Fisher, Bruce Dern, Rick Ducommun and Corey Feldman, the film is a fun twist to a prevalent theme that digs to a very real, commonplace sentiment about foreignness and remains just as relevant today as it was nearly thirty years ago. Fear and paranoia infect the Blu-ray neighborhood courtesy of Shout! Factory with an excellent remastered picture quality and the same great audio presentation as before. The supplements are a bit on the light side but entertainingly informative nonetheless, making the overall package recommended for cult enthusiasts and fans of anything 80s.