Blade of the Immortal

Takashi Miike slices and stabs his way through a solid adaptation of the celebrated manga Blade of the Immortal to celebrate his 100th film. As the venerable filmmaker hits this cinematic milestone, he has carefully crafted a strong character-driven action film that isn't afraid to take its time to explore motivations and plot in between surges of gleefully gory and violent bloodletting. Some of the action spectacles may be too over the top for its own good, but the film remains solid and worthy entry in Miike's expansive catalog of films. The Blu-ray is a first-rate presentation that could possibly only be improved by a 4K UHD release. Highly Recommended

Adaptation is a tricky task to tackle. Reverence for the source material is one thing but bringing a work to life - even an illustrated one - while also balancing the need to create something cinematically worthy is no easy feat. It's especially difficult when working with a source material as expansive as one like Blade of the Immortal. Starring Takuya Kimura as the cursed immortal swordsman, director Takashi Miike forgoes his penchant for splatter and focuses on crafting a strong character piece that is punched up with feverous swordplay and colorful characters in this his 100th feature film.

After defeating an army of 300 men in a legendary battle to avenge the death of his sister, the disgraced swordsman Manji (Takuya Kimura) is cursed with immortality by a mystic. Unable to die, Manji must bear the scars of battle as he drifts from one town to the next. When a young girl named Rin (Hana Sugisaki) hires Manji to help her avenge the death of her father at the hands of the evil Anotsu (Sota Fukushi), Manji has the chance to end the curse and an honorable death. 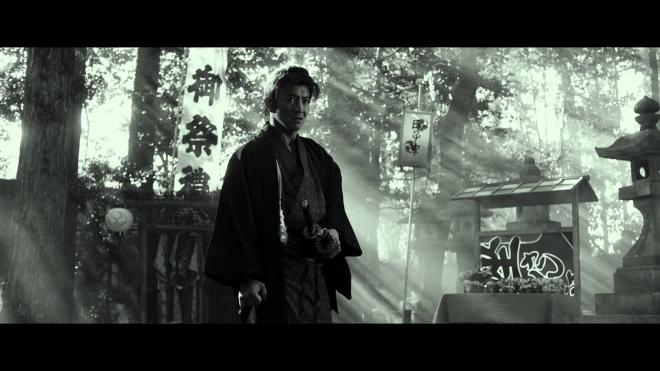 My experiences with Blade of the Immortal started long ago when Dark Horse Comics began reprinting translated issues of the Japanese manga. I was instantly hooked by Hiroaki Samura's story and the stylized black and white artwork. The story of a master swordsman and his young female apprentice reminded me of the Lone Wolf and Cub movies starring Tomisaburo Wakayama without having to figure out how to traverse that already extensive manga series. Month after month, issue after issue, I dutifully picked up my comic queue from my local shop and would devour each issue all the while thinking how great it would be for a movie to be made out of this series.

25 years later, Takashi Miike brought this series to life in a grand way. From the opening black and white sword fight to the film's final touching moments, Miike managed to wrestle a story that was equally grounded and gritty while also being extravagant almost comically violent. When I was a nerdy awkward high school kid and dreamed of what a movie of Blade of the Immortal would look like, I never thought the man who brought the world Audition and Ichi the Killer would be the guy to pull it off. But then around 2010 when 13 Assassins came out followed by his remake of Hara-Kiri: Death of a Samurai came out, it quickly became apparent that Miike was the man for the job.

While I wouldn't call his 100th film his greatest effort, I am grateful and excited by the simple fact that Miike clearly had a reverence for the source material. The look and the feel of the film almost perfectly replicate the vibe of the original manga while also pushing the story along in a way that fits as a film. Given the amount of swordplay one could have forgiven Miike if he'd decided to go full out splatter and gore with the film filming one aimless sword fight after the next, but thankfully he chose to make it a character piece. At a strong two hours and twenty-minute runtime, Blade of the Immortal doesn't waste time getting to the action but also knows when to tap the breaks and let the actors build their characters creating fulfilling arcs for them to travel. A scene midway through the film where Kimura's Manji offers a shoulder for Sugisaki's Rin to cry on is one of many somber well-executed character moments that gives this film a sense of purpose beyond being Miike's 100th feature. 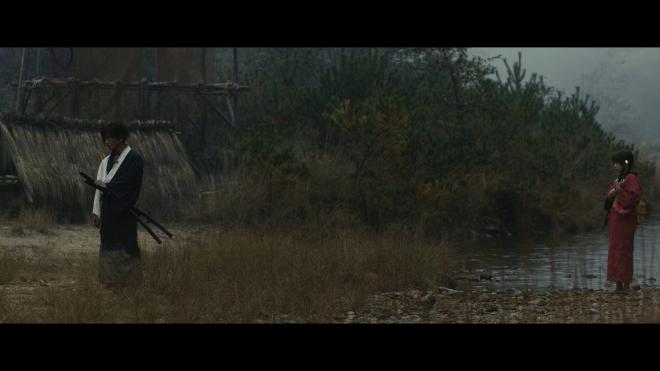 If I have a complaint, it would be that the action sequences can be almost repetitive. You can only see limbs chopped off and fountains of blood so many times before its no longer exciting or visceral. I simply became numb after awhile. Thankfully the film doesn't lose its footing or squanders the good effort as it comes to a strong conclusion. Additionally, I feel the film's opening black and white ode to the original manga comics should have been maintained throughout. That opening fight is intense and visually stunning to say nothing of the visceral quality of it. In color, it feels like an amount of sharp edge is lost and the film's action can be a bit blunted. But that just comes down to personal taste. As it stands Blade of the Immortal may not be Miike's greatest achievement, but it certainly is an entertaining flick just the same. If you're a Miike fan, there's a lot to celebrate with his 100th film.

Blade of the Immortal arrives on Blu-ray courtesy of Magnolia Pictures. Pressed onto a Region A BD-50 Disc, the disc is housed in a standard Blu-ray case with Identical slipcover artwork. A Best Buy exclusive SteelBook package is also available with different artwork. The disc loads to trailers for other Magnolia films before arriving at an animated main menu with traditional navigation options.

Blade of the Immortal sports a clean, crisp, and bold looking 2.39:1 1080p transfer. Details are strong and clear throughout allowing viewers to soak in the scenes of bodily dismemberment and intricate makeup work as well as the beautiful scenery of the film. If there is a small quibble to be had with this aspect of the transfer it has to do with the digital effects used to punch up some of the gore and Manji's healing abilities. In these small moments, these digital effects stand out compared to the impressive practical effects surrounding them. Otherwise, this is a near-flawless Blu-ray presentation. Colors are bold with a strong primary presence. Black levels and contrast are spot on, never losing any sense of depth the image naturally provides. There is some slight banding in a couple of moments, but they're very brief and hardly knock the score. All around fans of the manga and the film should be very happy with this presentation. It could only be made better if it had been given a fully uncompressed release on 4K Ultra HD.

While Blade of the Immortal offers up a pleasing Japanese DTS-HD MA 5.1 mix with English Subtitles, this is largely a front-loaded presentation. Aside from the big action set pieces and a few moments of background scenery noise, there really isn't a whole lot of surround activity to report. You get a sense of scenery and the basics, but there's little to draw your attention from one side to the other or to the rears. However, the dialogue is clean and clear throughout, even when the characters are speaking in hushed whispers, there's never any issue hearing what's being said. All around the mix is on point for this type of film allowing the big action scenes to have their fun while the rest of the mix rolls with the front/center channels.

Blade of the Immortal thankfully is not cursed in the bonus features department. The assortment of extras is robust and informative and goes beyond the typical talking head EPK material.

Cast Interviews (HD 56:10) While a lot of the cast and crew material here can be a bit frivolous EPK material, there is a lot of behind the scenes on set footage that showcases the effort that went into the film and actually manages to pull together some worthwhile and informative content as a result.

Manji versus 300 (HD 18:24) This is an awesome look at the two major battle sequences that open and close the film. There is a bit of the tried and true talking head material to give context, but the set footage of them working to execute these elaborate set pieces is pretty exciting stuff.

Takuya Kimura Interview (HD 28:44) Kimura hosts this piece as it details his extensive training and fight preparation while working on the film.

Takashi Miike celebrates his cinematic milestone with vigor and flair with Blade of the Immortal. A solid entry in the classic samurai swordsman genre, action scenes come fast, furious and gloriously bloody. Thankfully Miike doesn't lose focus on characters and allows for an interesting personal journey to come to focus. It may not be his best film ever, but it's certainly entertaining and a wild adaptation of the classic manga series. Magnolia has delivered a terrific Blu-ray release offering up a beautiful image transfer, a solid audio mix, and a host of worthwhile bonus features to dig through. This is an easy one to call Highly Recommended.

Sale Price 12.19
List Price 16.98
Buy Now
3rd Party 5.49
In Stock.
See what people are saying about this story or others
See Comments in Forum
Previous Next
Pre-Orders
Tomorrow's latest releases