Will Ferrell and Mark Wahlberg reunite for Sean Anders's Daddy's Home 2, but the once-rivaling dads enjoying their new BFF co-dad relationship is interrupted by Mel Gibson and John Lithgow's parenting tips. The holiday-themed comedy sequel crashes the festivities with a near-reference HD presentation and a good Dolby Atmos soundtrack, but a small set of supplements makes this present for For Fans Only.

Last we saw Will Ferrell and Mark Wahlberg in a contest of which father knows best, the two frenemies eventually came around to seeing the benefit of each other's presence in the lives of their kids and even discovered they make good friends. In Daddy's Home 2, the co-parenting pair has graduated to BFFs, discussing and coordinating events with each other and Ferrell making his best bud a fresh cup of hot cocoa while Wahlberg directs school drop-off traffic. Throwing a wrench into this well-oiled bromance is the first of two catalysts — if that's even possible for a supposedly simple, straightforward story — by way of little Megan (Scarlett Estevez) divulging to an audience of strangers attending a holiday play her frustration with being shared between two households. But the two dads' solution to the crisis is immediately interrupted by the second catalyst: news of both men's fathers, Kurt (Mel Gibson) and Don (John Lithgow), also visiting for the holidays. Let the holidays hijinks commence with a series of stereotypical Christmas-related gags!

As in the first movie, the two lead actors display an excellent comedic chemistry that immediately feels natural and genuine. The goofily bathetic and reliable Ferrell provides the pratfalls and hijinks, which includes jabs at being overemotional, while the more self-assured and fearless Wahlberg delivers the deadpan sarcasm that slowly chips away to reveal a vulnerable unsureness. And since these granddads are the influencing paterfamilias in both men's lives, the two new characters are essentially double the traits and mannerisms previously seen in Wahlberg and Ferrell. Gibson's heroic pilot is an even cruder, more uncouth shell of pure manliness literally shown treating women as nothing more than objects for his sexual gratification. Lithgow's character is provided with a bit more depth as his overly bubbly exuberance and almost-sickening cheerfulness serves as a mask hiding more troubling issues. Ironically, the plot's theme of encouraging open communication is neglected or abandoned altogether when it concerns the kids in favor of a lazy, completely unwarranted conclusion, making Daddy's Home 2 the lamest "together Christmas" ever! 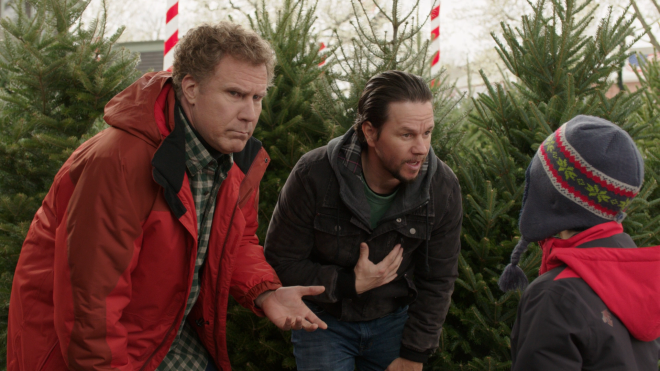 Paramount Home Entertainment brings Daddy's Home to Blu-ray as a two-disc combo pack with a flyer for an UltraViolet Digital Copy. The Region Free, BD50 disc is housed inside a blue eco-vortex case with a DVD-9 on the opposing panel and a glossy slipcover. After a few skippable trailers, viewers are taken to a static menu screen with music.

Granddads visit for the holidays with suitcases packing an exceptional, near-reference AVC-encoded transfer, showing razor-sharp clarity and resolution for a majority of the entire runtime. There are a few softer moments sprinkled throughout, but they appear related to the original photography, an attempt to romanticize specific sequences. Overall, viewers can enjoy sharp, distinct details in the clothing and the surrounding foliage while appreciating the minute imperfections and the grain of the cabin's woodwork. Facial complexions appear healthy and reveal every wrinkle, pore and negligible blemish with lifelike textures.

Presented in its original 1.85:1 aspect ratio, pitch-perfect contrast delivers brilliantly crisp whites in the snow, allowing the individual crystals to beautifully sparkle in the sunlight and being of a different shade than in the clothing, the lights, the fluffy clouds and the gray hairs of both grandpas. Brightness levels could be a tad stronger, looking a smidge faded and murky in some shots and low-lit conversations, but for the most part, blacks are true and full-bodied while displaying plenty of appreciable details within the darkest shadows. Being a holiday comedy, the cinematography is obviously designed to be as vibrant and colorful as possible, and in that area, the HD video does not disappoint. From the Christmas lighting at night to the clothing worn by the entire cast, the palette is simply magnificent and richly-saturated while lavishing the screen with a luxurious array of secondary hues providing lots of warmth and a joyous, animated cheer.

The family comedy sequel makes a surprise visit to Blu-ray with the same Dolby Atmos soundtrack enjoyed on the 4K Ultra HD, and even though it doesn't make much of an impression, the spatial design has its moments.

For a more in-depth take on the audio quality, you can read our review of the 4K UHD with Dolby Vision HERE.

In Daddy's Home 2, the once-rivaling dads have graduated to BFF co-dads, discussing and coordinating events with each other and even planning a "together Christmas." Ferrell and Wahlberg reunite with the same comedic chemistry as before, but their sparks and holiday plans are interrupted by Mel Gibson and John Lithgow's own unique parenting styles, teaching audiences a valuable lesson on useless parenting. The comedy sequel crashes home theaters with a gorgeous, near-reference HD presentation and a good, if not somewhat slightly disappointing Dolby Atmos soundtrack. A small set of bonus features rounds out the package, but by the end of this wacky holiday adventure, only fans will want to visit this dysfunctional family.

Sale Price 9.39
List Price 11.99
Buy Now
3rd Party 29.99
In Stock.
See what people are saying about this story or others
See Comments in Forum
Previous Next
Pre-Orders
Tomorrow's latest releases