The League: The Complete Season Two

When I reviewed first season of 'The League' last year, I wasn't a big NFL fan. I had, however, known the amount of time one can spend on fantasy sports. I've spent many late nights over the past few years trying to set up the most perfect fantasy basketball team one could conceivably construct. Even if you get your team set just the way you like it, it's only a matter of time until injuries decimate your team and you find yourself falling from first to last in a blink of an eye. This year is different though. With the NBA lockout raging on I decided to fulfill my fantasy sports addiction I'd head on over to the NFL. A few of the readers here at High-Def Digest set up a league and graciously let me join. Knowing next to nothing about today's NFL (What do you mean Jerry Rice retired?!) I set to work researching players before our draft. I didn't mean to spend so much time on it, but I did. That's what happens with fantasy sports. They suck you in. That research paid off though. Five weeks into the season and I'm 4 – 1 baby! Tied for first in our leagues, and I'd just like to use this public forum to talk a little trash to all my league-mates. Get used to it back there guys, because you're never going to feel what it's like to be at the top.

Okay, truth be told, I'm not that much of a heartless competitor. While I find a certain satisfaction in winning, I don't constantly trash talk the people I'm competing against. We're a fairly congenial bunch actually. It's nice that way. Although, it's true that fantasy sports can turn a close-knit group of friends into a pack of vicious, vindictive rivals.

That's where 'The League' comes in. In the first season we were introduced to a group of friends that joined a fantasy football league with each other each year. Their head-to-head battles became personal. Sharp barbs, and insults flew as losers whined and winners gloated. No one was spared.

Fresh off of Andre's (Paul Scheer) championship each one of the guys is looking to claim the trophy. They hate that Andre won, mainly because he's such a tool. Pete (Mark Duplass) is still divorced, and has decided to steal Andre's idea of having the draft party in Las Vegas. Kevin (Stephen Rannazzisi) is dealing with the trials that come with being the league's commissioner while also trying to block his NFL-loving wife, Jenny (Katie Aselton), from being in the league. Ruxin (Nick Kroll) will bribe, threaten, and blackmail anyone if he thinks that he's going to get a leg up on the competition. All the while Taco (Jonathan Lajoie) is still stupid, and only casually understands that he's actually in a fantasy football league.

These guys take fantasy football seriously. So seriously that they'll choose it over marriages, sex, and children. In short, they're a horrible bunch of degenerates who berate each other endlessly with colorful cuss-filled tirades and it's hilarious. I think that season two is much better than season one. This season had the perfect blend of football freakouts and family "fun." The way this game and this league affects their everyday lives is the crux of the show. Everything revolves around a make believe team that scores points based on players' performances. While it's actually sad to realize that there are people out there that must take this game that seriously, it's just fun watching these guys' lives implode at every turn because they don't want to look like losers during their next matchup.

This season is even cruder than the first if you can believe that. It's on FX, so of course they're going to be pushing the envelope as far as swearing and sexual content is concerned. Have no fear though, because these guys all know how to weave a tapestry of profanity that will have you laughing. Partly because of its soul-crushing qualities, and partly because you know these actors are ad-libbing much of what they're saying.

If you liked the first season of 'The League' then you'll love the second. It definitely isn't for everyone. You do need to know something about the way fantasy sports works to even remotely have interest in it. While it does focus more on the guys rather than the game they play, not knowing the way the game works will drastically decrease the enjoyment that can be had here. Fantasy sports fans on the other hand; this is the show for you.

This season of 'The League' got 13 episodes, as compared to the six episodes of season one. That means there are two BD-50 discs in this set, not just one. They're housed in a standard Blu-ray keepcase provided by Fox. The case indicates a Region A coding.

The second season of 'The League' actually looks slightly better than the first. The 1080p picture is a little crisper and free of some of the technical artifacts that were on the first season release.

Filmed single-camera handheld style, the show takes on a more personal approach. Most of the shots of characters are close-ups that get right up in their faces. Fine detail is well defined. Pores, facial hair, and even the gap in Andre's teeth are presented sharply. Edges are concise. Textures like the woven pattern in Kevin's couches or even the blotchy paints on Andre's newest painting are perfectly visible.

The show does suffer somewhat because of its intimate, low-budget design. Outside filming often takes on hot white light. Like the crew just went outside and filmed their scenes without much in the way of behind the scenes lighting techniques to keep the outside light glare down. That's okay though, because the way the show is shot, you expect it to look a little less than perfect. As for technical anomalies, the first season featured noticeable aliasing and some banding, all which were unseen in this season. That was a welcome surprise.

The audio, on the other hand, is an identically sounding DTS-HD Master Audio 5.1 mix as before. Nothing has been added or changed to make this audio mix sound any better or worse than the first season. The fact is a show like this just doesn't need a robust sounding audio presentation. Most of it is centered up front with dialogue-heavy scenes. The rapid-fire banter is always clear, which is nice. Rears occasionally engaged, like when the guys visit Vegas in the first episode and the standard Vegas surround sound (clinking slot machines, giggling girls by the pool, and hip-hop strip club music). LFE is present only sporadically as different hip-hop songs call for it. Other than the soundtrack though, there is really no need for the sub-woofer to be busy. All you need is clear dialogue, which you get, and this presentation is a success. 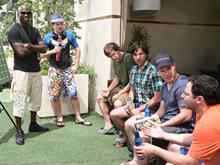 After the first season I never thought such a niche show would survive. Boy was I wrong. 'The League' has now just premiered its third season. Apparently fantasy football fans needed a show that accurately represented the strong feelings and emotions that go along with playing the game. If you're a fantasy fan then you'll want to check out 'The League.'

Sale Price 4
Buy Now
3rd Party 3.49
In Stock.
See what people are saying about this story or others
See Comments in Forum
Previous Next
Pre-Orders
Tomorrow's latest releases