Overview - Two New York cops get involved in a gang war between members of the Yakuza, the Japanese Mafia. They arrest one of their killers and are ordered to escort him back to Japan. In Japan, however, he manages to escape. As they try to track him down, they get deeper and deeper into the Japanese Mafia scene and they have to learn that they can only win by playing the game the Japanese way.
OVERALL
Recommended For Fans

As a child of the '80s, most of my knowledge of Japan has been gleaned entirely from movies and the media. That's not a good thing, because quite frankly, Hollywood cinema has done a miserable job of depicting the realities of Japanese life and culture. In fact, aside from some very recent, more sensitive efforts, like Sofia Coppola's 'Lost in Translation' and Clint Eastwood's 'Letters from Iwo Jima,' you'd be hard-pressed to find anything more than caricatures and cliches on the big screen. It is under this backdrop that the "East meets West" culture clash thriller reached its stylistic zenith with the 1989 Ridley Scott-Michael Douglas yarn 'Black Rain.'

Our story concerns itself with New York cops Nick (Douglas) and Charlie (Andy Garcia), who are pulled into a gang war between members of the Yakuza (aka the Japanese Mafia), when they are assigned to transport the psychotic Sato (Yusaku Matsuda) back to Japan. After Sato easily escapes confinement fresh off the plane, Nick and Charlie will have to team up with the Japanese authorities, led by the morally rigid Lt. Masahiro (Ken Takakura) to recapture Sato. Of course Japan is very far away from New York in both custom and culture, and Nick will find little appreciation for his bull-headed, very American strong-arm tactics. As Nick and Charlie delve deeper and deeper into the world of the Yakuza, they quickly discover that the only way to win is to play the game the Japanese way.

'Black Rain' falls somewhere in the middle of Hollywood's anti-Japanese cinematic offenses. It's a well-meaning, if completely Americanized "exploration" (as this disc's bonus features tout) of another culture, yet despite any good intentions it is still fascinated with the "exotic" Eastern customs and people in much the same way a kid is entranced by a new toy gun.

Certainly, a Ridley Scott film always looks spectacular, and 'Black Rain' is no exception -- it is never less than compulsively watchable -- frequently distracting us from how formulaic and predictable this "exploration" really is. Despite some bright spots, particularly a solid set-up in the first act, it squanders most of the opportunities inherent in the story in favor of standard-issue action-thriller elements that now feel quite dated.

Though he looks pretty ridiculous sporting a near-mullet and riding a motorcycle, at least Douglas (also a co-producer on the film) brings a certain ambiguity to the pig-headed Nick by avoiding the temptation to play him solely as rah-rah hero. And 'Black Rain' definitely earns points for attempting to balance out the obvious racism of the Douglas character (who is not above smacking a handcuffed suspect across the mouth, just for kicks) with Garcia's younger and more sensible Charlie. Perhaps, however, it is Nick's relationship with Masahiro (the wonderful Takakura) that is the true heart of the film. Their later, quieter scenes together manage a genuine emotional pathos sorely lacking in the rote, by-the-numbers thriller elements of the rest of the movie.

Ultimately, 'Black Rain' drops any interesting social commentary for genre conventions and an inert thriller plot we care little about. With so many missed grips on good ideas, 'Black Rain' ranks as one of Scott's weakest efforts, and is for me the film where he finally lived up to his critical reputation and rode the style over substance train clear off the tracks. 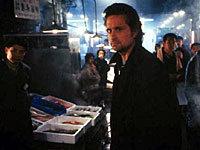 When it comes to remasters of catalog titles, Paramount tends to not be held in the same regard as, say, a Warner. Which is a bit of a crime, really, as Paramount has impressed me lately with its next-gen releases. Titles like 'Aeon Flux,' 'Four Brothers' and in particular 'Reds' were real stunners, and now 'Black Rain' joins these elite ranks. Considering that this is an eighteen year old film, I just wasn't expecting a phenomenal image, but I was truly blown away -- 'Black Rain' looks fantastic.

Paramount rolls out the BD-50 dual-layer red carpet for 'Black Rain,' presenting the film in 2.40:1 widescreen and 1080p/MPEG-2 video. It is clearly superior to the standard-def special edition release of a few months back, and matches the HD DVD version. The image is clean, smooth and shockingly free of grain and dirt. Colors, though not as over-the-top as those on most modern movies, are excellent. Stability and consistency are first-rate, with nice bold reds and blues particularly impressive; fleshtones, too, are pitch perfect, despite a heavy use of filtering by director of photography Jan De Bont. Detail and dimensionality are also clearly superior to just about any remaster I've seen for a film of this vintage.

Any complaints I do have are very minor -- there are couple instances of print dropouts (maybe three times, tops), and a few scenes may look a tad bit dark. But each of these are so minimal as to be irrelevant. In short, 'Black Rain' looks terrific

Still, despite the presence of the extra surround channel, I was never totally floored by the film's sound design. Dynamic range and fidelity is bright and clean, with a realistic, full sound and no distortion. Dialogue is crisp and always intelligible, and is well balanced in the mix. Still, it is too bad low bass is less than exceptional -- I kept expecting the .1 LFE to really hum in Hans Zimmer's Asian-flavored score and the couple of pop/rock tunes on the soundtrack, but nothing ever really came to life. (In the supplements, Zimmer says he wanted the score's percussive elements to sound as "powerful as gunshots" -- no such luck here.) Surrounds are not that active, either, and quite frankly I never heard much in the way of exciting EX action. There are a few front to back and rear-channel pans, usually involving a motorcycle, but 'Black Rain' really is a dialogue-driven film. 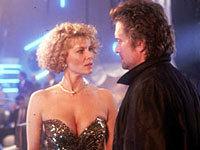 'Black Rain' is generally considered one of Ridley Scott's lesser efforts, so it is perhaps not surprising that it took Paramount over fifteen years to finally produce a decent disc release of the film. A new DVD special edition of 'Black Rain' was released this past October, with a solid new commentary and documentary. Paramount has ported over all those same extras here, with no new bells and whistles and decent quality 4:3 full screen, 480p video.

The centerpiece is a new four-part, 70-minute documentary on the making of the film. Elevating the piece is the support of every single major player involved with the movie, including Ridley Scott, producers Stanley Jaffe and Sherry Lansing, screenwriters Craig Bolotin and Warren Lewis, costume designer Ellen Mirojnick, composer Hans Zimmer and actors Michael Douglas, Andy Garcia and Kate Capshaw. The stories are thorough and engaging, from the pairing up of Scott and Douglas (then a fresh Oscar winner for 'Wall Street' and a huge star after 'Fatal Attraction'), the cast-against-type Capshaw, the considerable challenges filming in Japan (a surprising amount of the film was shot in the U.S.), a significant reduction in the film's runtime (it originally ran nearly three hours) complete with retooled ending (stills of which are included here) and the poor critical reception the movie received upon release. If there is any problem with 'Black Rain,' it is just that it really isn't a particularly significant film, and arguably has not left much of a legacy. But in terms of production stories, this is an entertaining enough doc for fans. (Note that the piece is broken up in a weird fashion: the "Script & Cast" and "Post-Productions" are reasonable enough, but the two-part "Making the Film" sections are lopsided at 28 minutes and 9 minutes, and really, the whole thing should just be watched as a complete whole.)

Given the substance of the documentary, the audio commentary by Ridley Scott often feels redundant. He is always a great speaker, but repeats much of what we already learned in a more varied fashion on the doc. Scott does break down just about every scene, and the how, why and where it was filmed, though not so much the characters and story intricacies beyond the banal. So Ridley disciples and film students will probably get the most benefit out of this one. Personally, I found the doc more fun and preferable.

Rounding out the fun is a widescreen Theatrical Trailer, presented in full 1080p video.

'Black Rain' is a fairly standard late-'80s action thriller, and another in Michael Douglas' long line of morally ambiguous cop/lawyer/adulterer potboilers. Its style holds up fairly well twenty years on, but not so much the film's East-West politics and pandering to thriller cliches. This Blu-ray release is excellent, however, with a fantastic transfer and a nice suite of new extras. An easy recommend for fans of the film.

Sale Price 24.99
Buy Now
3rd Party 24.99
In stock. Usually ships within 2 to 3 days.
See what people are saying about this story or others
See Comments in Forum
Previous Next
Pre-Orders
Tomorrow's latest releases