Overview - A thirtysomething slacker suspects his parents of setting him up with his dream girl so he'll finally vacate their home.
OVERALL
Give It a Rent 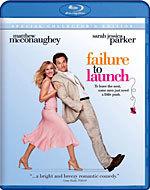 It's tempting to give 'Failure to Launch' points just for being daring, as it manages to create a Hollywood-ized, feel-good romantic comedy from the most unlikely subject manner. Yet somehow, when all is said in done, I got the distinct impression that no one who made this movie realized just how twisted and rather creepy its situation and characters really are. If the infantile, borderline incestuous people depicted this movie lived next door to you, you wouldn't invite them over for a drink and some barbecue -- you'd lock the door and call the cops.

Matthew McConaughey stars as Tripp. He's thirty-something, handsome, passionate about his job selling sailboats and loves pretty and intelligent women. He seems like the perfect catch, except for one hitch -- he still lives with his parents (Kathy Bates and Terry Bradshaw). When he brings a date home and says, "I like to live somewhere nice," he means it -- it's just that "nice" means his mom still cooks for him and does the laundry, while dad tends to barge in at the most inopportune moments (i.e., during sex right before the moment of climax).

Of course, Tripp's mom and dad secretly want him to move out and "spread his wings," so they do what any sensible parents would do -- they hire him a prostitute. Okay, so Paula (Sarah Jessica Parker) isn't officiallya prostitute, but she may as well be. Helping her "clients" with their "failure to launch," she dates them, pretends to be their girlfriend and then, when they finally decide to move out to impress her, she waits until they've signed the lease and then dumps them. All with a nice, big, fat check from mom and dad at the end.

Needless to say, things will not go as planned between Tripp and Paula. Perhaps because he looks like Matthew McConaughey, Paula finds herself drawn to Tripp in a way she's not experienced with her other (far more homely) clients. This does not go unnoticed by her roommate, the lovelorn, kooky Kit (Zooey Deschanel), nor Tripp's two roguish best friends, Demo (Bradley Cooper) and Ace (Justin Bartha). Soon, they are plotting with Tripp's parents to keep two together, even after Tripp gets wise to the ruse and dumps Paula, who herself was ready to back out of the deal. This one's definitely a new twist on the old romantic comedy formula -- 'Failure to Launch' is the first chick flick I've seen where everyone but the couple themselves wants to see the relationship succeed.

On paper, this premise sounds pretty god-awful. Really, what are we supposed to think of these selfish, immature people and their serious boundary issues? But leave it to Hollywood to pretty things up. A story about a man who can't leave the nest and the relationship complications that such a syndrome can cause, is certainly ripe for a romance, even a lightly comedic one. But in 'Failure to Launch,' the filmmakers make no apparent attempt to examine their subject beyond the level of a daytime TV talk show. We given the usual pop psychology: men are afraid to leave home because they are afraid of intimacy, while any woman who chooses to be single must, of course, be miserable. Tripp and Paula aren't destined to fall in love because they share the same interests, goals and maturity level. They are destined to fall in love because in the worldview of the script, they simply doesn't believe they have any chance for happiness otherwise.

Needlesstosay, realism in 'Failure to Launch' is non-existent, in no small part because it is cast with impossibly good-looking Hollywood actors -- the kind with absolutely no resemblance to actual human beings. Sorry, but men who live in their parents' basements don't look like McConaughey and Cooper -- they look like Cartman from 'South Park.' And any woman who would do to her "clients" what Paula does would have been sued for fraud long before she even met Tripp. I had more luck counting the number of shots of Parker's low-cut necklines and beefcake shots of McConaughey without his shirt on than I did finding any relatable, three-dimensional characters.

Still, 'Failure to Launch' is certainly a fun chick flick. It nails every single cliche of the genre, and yet manages to make them interesting enough even if we have seen them all a million times before. This is mostly thanks to the film's supporting cast (and not the rote script). Bates and Bradshaw add a believable, good-natured spin to their underwritten characters (Bates in particular shines when she finally reveals her true motives to Trip). Bradley Cooper is also the kind of charmingly smug but funny character actor who really should be a bigger star than he is. As he did in the 2005 blockbuster 'Wedding Crashers,' he steals every one of his scenes from his more famous co-stars, so much so that he's actually more appealing than McConaughey -- I kept wishing he'd run off with Parker, and leave that sad sack Tripp behind. Deschanel also has a likable loopiness to her, managing to squeeze out a hint of an original characterization from her throwaway subplot involving one very loud mockingbird.

In short, 'Failure to Launch' boasts some fine performances and some semi-engaging re-tellings of genre cliches. While it fails to reach the higher ranks of the chick flick pantheon, there are certainly far worse examples of the genre, and if nothing else, is a perfectly respectable, quite entertaining way to waste away 98 minutes. And it makes a pretty good (if somewhat creepy) date movie, too. 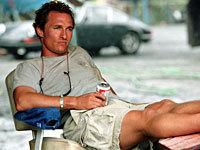 Paramount Home Entertainment continues its dual-format next-gen support with another simultaneous release on Blu-ray and HD DVD. Oddly, they continue to use different codecs for the different formats, with the Blu-ray getting the MPEG-2 treatment, and HD DVD getting VC-1. Despite this difference, both transfers come from the same master, are presented in 2.35:1 widescreen and 1080p video, and look identical.

The cinematography in 'Failure to Launch' is typical of most romantic comedies -- bright and colorful, with little uniqueness. There are lots of sunny outdoor locations, interiors that look straight out of a Crate & Barrel catalog, and fleshtones that are so warm that everyone appears to have a perfect tan. The source is immaculate, and grain is not an issue. Colors are rich but not oversaturated, with pleasing primaries and no chroma noise or bleeding. Detail can also be rather exceptional -- the transfer is sharp as a tack, with most scenes sporting an excellent, palpable sense of thee-dimensionality.

Unfortunately, there are a couple of problem areas. Shadow delineation can be lacking. Black crush appears a bit harsh, with fine details lost to the murk. That does give the image pop, but it can look a bit too dark in interior scenes. More odd is some apparent print wavering. I noticed it in only a few scenes -- specifically the first introduction to Zooey Deschanel, and when Bradley Cooper finally reveals to Matthew McConaughey that's he's being tricked. The effect is not severe, but brightness fluctuates in thin bands, and it can be distracting. Otherwise, 'Failure to Launch' is a pretty, appealing image that is sure to please.

Once again, Paramount just can't get the bitrates equal for its Blu-ray and HD DVD releases. 'Failure to Launch' continues the studio's lopsided approach to next-gen audio, with the Blu-ray receiving a 640kpbs Dolby Digital 5.1 surround track, while the HD DVD gets preferred treatment with a higher-resolution 1.5mpbs Dolby Digital-Plus 5.1 version. Luckily for Blu-ray, the film's sound design is boring enough that the lost bits don't really hamper the audio presentation on this one.

In short, envelopment is lacking. There is only the odd discrete effect in the surrounds, primarily in the couple of scenes when Tripp takes Paula out sailing. Otherwise, it's all front heavy, with most of the music and effects spread across the front channels. Dialogue sounds top-notch, however, with even Matthew McConaughey's lazy line readings perfectly audible. Dynamics also deliver what's needed, supporting the material very well with warm highs and solid low bass. 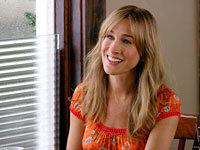 At least here all things are equal. Paramount offers up an identical spate of extras on the Blu-ray and HD DVD versions of 'Failure of Launch,' both of which also mirror the standard-def DVD released early last year. Usually, I hate the kind of EPK banalities assembled here, and make no mistake, this package is far from groundbreaking. But by focusing less on the making of the movie, and more on the "phenomenon" of its subject matter, it's actually kind of amusing.

Things kick off with the 12-minute "Casting Off: The Making of Failure to Launch." This one's your typical puff piece, featuring Matthew McConaughey, Sarah Jessica Parker, director Tom Dey and most of the rest of the main cast and crew trying to explain why their movie isn't just another chick flick. Also spliced in are tons of film clips, plus plot recap, which is always annoying since we've already seen the movie.

Just as surfacey but a bit more interesting are two cultural featurettes, totaling nearly 20 minutes. "The Failure to Launch Phenomenon" and "Dating in the new Millennium" both feature various professionals and relationship experts (is there such a thing?) sounding off, VH-1 style, on dudes who still live with their parents and the women who (try to) love them. We even meet a few of these "Twixters" and their parents -- I hate to mock, but this is one scary "phenomenon" that seems more akin to a venereal disease infecting the brain. I thank god that it didn't strike me.

"Moviefone.com Unscripted with Matthew McConaughey and Terry Bradshaw" is the most substantial of the extras, though at only 14 minutes, that's not really saying much. Ex-NFL superstar Bradshaw is such a likable guy that he manages to outshine McConaughey by a mile, and their chat is loose and fun. Plus, you gotta give Bradshaw props for willing to bare his flabby, aging ass for all the world to see in CinemaScope, and being such a good sport about it.

The package rounds out with the film's Theatrical Trailer, which is the only one of the supplements to be presented in full 1080p high-def video.

'Failure to Launch' is exactly the movie you think it is. Cute and appealing, with a preposterous premise that only works because the stars are so darn attractive. This Blu-ray release serves the material well -- the transfer is pretty, and the extras fluffy but fun. Don't expect anything more than a Saturday night date movie out of this one, but I suspect that if you've read this far, that will be enough.

Sale Price 22.77
Buy Now
3rd Party 16.95
In Stock.
See what people are saying about this story or others
See Comments in Forum
Previous Next
Pre-Orders
Tomorrow's latest releases