"A guitar-picking good ol’ boy. A clean-cut all-American. A Navajo. A bookworm. A lumberjack. A slum kid. All enter Marine boot camp to be trained, hardened and ready to answer their country’s Battle Cry. Scripted by Leon M. Uris from his own novel, directed by action master Raoul Walsh and starring a who’s who of ’50s movie stars, Battle Cry is an epic ode to World War II Marine heroism and homefront sacrifice, a saga following recruits from boot camp to a New Zealand base of operations to the war they knew would someday come their way: the bloody invasion of Saipan. Enlist now alongside the fighting men and stalwart women of Battle Cry for boisterous tenderness and gung-ho excitement."

When CinemaScope burst upon the scene amid much fanfare in 1953, Hollywood studios quickly jumped aboard the widescreen bandwagon, mounting musicals, Biblical epics, swashbucklers, travelogues, and adventure yarns in the new format. Yet it took a while to bring one of the most popular film genres into the fold. War movies would seem like a CinemaScope natural, with their expansive battle sequences, military pageantry, and eye-popping spectacle maximizing the impact of the increased aspect ratio, but it wasn't until 1955 that the first widescreen war flick hit theaters. And predictably, eager patrons lapped it up.

That film was Battle Cry, a big-budget, sprawling adaptation of Leon Uris' best-selling novel that ultimately grossed more than $8 million at the box office. That was a pretty penny in those days, and while no one would rank this by-the-numbers portrait of a tight-knit Marine Corps unit during World War II as one of the greatest war movies ever made, it remains an entertaining - if bloated - motion picture that makes excellent use of the fledgling CinemaScope process. Director Raoul Walsh gives Uris' tale the epic treatment, but for a film touting the word "battle" in its title, not much fighting transpires over the course of Battle Cry's almost two-and-a-half-hour running time. Just like the story's frustrated band of intrepid soldiers who itch to confront their Japanese foes, we keep waiting and waiting (and waiting) to see the action we've been promised. Yet the battalion doesn't get deployed until the film's final 20 minutes, resulting in a rushed climax that may be exciting and impressively shot, but only whets our appetite for more, and makes it hard to shirk the feeling we've been cheated.

Akin to (the much better) From Here to Eternity, but with a broader focus, Battle Cry follows the military and romantic exploits of a group of young, very green Marine recruits from their initial days of basic training a month after the attack on Pearl Harbor up through radio school, a stint in New Zealand, and all the way to the bloody Battle of Saipan in the Pacific. Led by the gruff, crusty Major Sam Huxley (Van Heflin), the motley outfit dubs itself "Huxley's Harlots," and is comprised of just about every social and ethnic stereotype imaginable. Yet the story, based on Uris' own experiences and narrated by the hard-nosed, blustery, but paternal Master Technical Sergeant Mac (James Whitmore), mostly revolves around a trio of all-American enlisted men - Private Andy Hookins (Aldo Ray), Private Danny Forrester (Tab Hunter), and Private Marion Hotchkiss (John Lupton) . Nancy Olson, Dorothy Malone, and Anne Francis portray their respective love interests, and all three dames carry a fair amount of emotional baggage. They also shanghai a good portion of the plot, adding too much soap to what should be a down-and-dirty, in-the-trenches combat chronicle.

Yes, Battle Cry grounds itself in the military milieu, depicting the day-to-day training, drudgery, and personal conflicts the men must endure. Much to its chagrin, the outfit continually gets passed over for active fighting and, instead, is dispatched to perform "mop-up" duties after the devastation at Guadalcanal and Tarawa. Such dull, unglamorous missions not only prevent the film from depicting large-scale battles, they also put more of an emphasis on the men's romantic entanglements, lending the story a softer focus than the title suggests. I'm not sure if it's Walsh's intention to have the audience as antsy as the soldiers to see some hardcore action, but that's what occurs, and the climactic Saipan showdown - after two hours of build-up - just isn't enough to satisfy our cravings.

The material suits the macho Walsh, who directed Cagney and Bogart in some of their best films, and he and cinematographer Sidney Hickox make fine use of the vast CinemaScope landscape. Lots of location work gives the movie an outdoorsy feel that heightens realism, and the extensive cooperation of the U.S. Marine Corps adds authenticity to the training sequences. Pacing is good, too. Despite the lengthy running time and lack of war scenes, the narrative chugs along at a brisk clip, jumping back and forth between the multiple storylines with admirable dexterity.

Heflin and Whitmore brandish plenty of square-jawed intensity, but aren't afraid to display some honest emotion when called upon, while up-and-coming heartthrob Hunter shows off some beefcake during a laughable rip-off of the famous From Here to Eternity beach scene, inexplicably shot indoors on a soundstage with a fake ocean and artificial sky. (Though Hunter and Malone, who also flaunts a fair amount of skin, make a sexy pair, they can't hold a candle to Burt Lancaster and Deborah Kerr, whose iconic crashing-surf embrace on a real Hawaiian stretch of sand is the stuff of movie legend.) With his gravelly voice, stocky physique, and pugnacious personality, Ray was born to play a Marine, and he often carries the picture on his broad shoulders, projecting an earnest sincerity that often belies his cocky swagger.

Battle Cry typifies the kind of big, bloated entertainment Hollywood produced during the mid-1950s to combat the encroaching television threat, and it succeeds in that regard. Though it doesn't deliver all it promises from an action perspective, its engrossing story and sweeping visuals hold attention throughout. Gloss may eclipse grit, but spirited performances from an accomplished cast supply this standard, clichéd tale with enough heart and soul to sustain it. With apologies to a couple of other famous World War II flicks, Battle Cry won't take you from here to eternity or to hell and back, but it's a solid specimen in a cluttered genre. 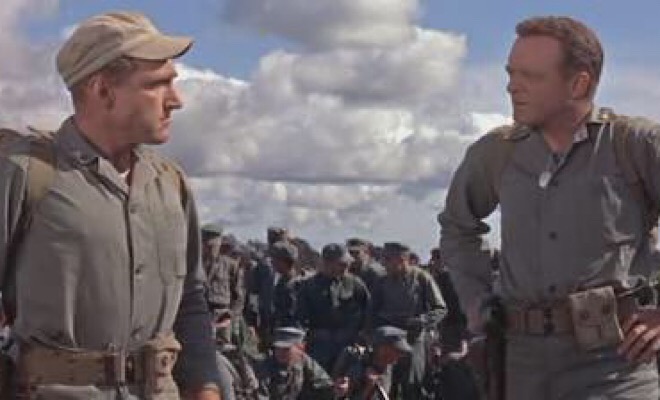 Battle Cry arrives on Blu-ray packaged in a standard case. Video codec is 1080p/AVC MPEG-4 and audio is DTS-HD Master Audio 5.1. Once the disc is inserted into the player, the static menu without music immediately pops up; no previews or promos precede it.

I've never been a fan of the single-strip color processes that replaced three-strip Technicolor in the 1950s, but Warner Archive has done a yeoman's job restoring Battle Cry, and the resultant 1080p/AVC MPEG-4 transfer beautifully revives this CinemaScope war film. Some of the rear projection work remains a bit faded, but for the most part, the image is vibrant and lush. Excellent clarity and contrast bring the locations to life (but also call undue attention to artificial process shots and "outdoor" soundstage sequences), while a natural grain structure preserves the feel of celluloid. Bold reds, brilliant orange flames, and verdant greens punch up the color palette, but flesh tones remain naggingly on the rosy side. Blacks are rich, whites are bright but resist blooming, and background details are easy to discern. Sharp close-ups showcase the rugged, leathery faces of the soldiers, but also highlight cool glamour of Anne Francis, Dorothy Malone, Tab Hunter, and Nancy Olson. No nicks, marks, or scratches sully the spotless source material, and any digital doctoring escapes notice. Warner Archive once again honors one of its catalogue classics, infusing an old war horse with newfound life.

Warner provides a brand spanking new DTS-HD Master Audio 5.1 track that fully immerses us in this widescreen epic. Surround activity is far more pronounced than in most remastered classics, with ambient effects like chirping birds and crickets subtly bleeding into the rear speakers. Max Steiner's rousing music score also envelops, and a wide dynamic scale handles all of its soaring highs and weighty lows without a hint of distortion. First-rate stereo separation across the front channels, especially during the climactic battle, widens the soundscape and heightens realism, while solid bass frequencies enhance the impact of exploding bombs. All the dialogue is clear and easy to comprehend, and any age-related defects like hiss, pops, and crackles have been meticulously erased. Involving audio is essential for a long war movie, and this impressive track keeps us focused on the action for almost two-and-a-half hours.

The only supplement is the film's four-minute original theatrical trailer, which is presented in high definition and salutes all the key characters, especially James Whitmore's Mac, who's referred to as "sort of a mother hen and a father confessor to a bunch of guys named Joe."

Too much personal drama and not enough military maneuvers keep Battle Cry from living up to its title, but despite the dearth of skirmishes, Raoul Walsh's big, colorful adaptation of Leon Uris' novel still maintains interest over the course of its lengthy running time. Warner Archive's Blu-ray presentation is devoid of extras, but the high-quality widescreen video transfer and remastered 5.1 lossless audio make this disc a treat for fans of the genre and the film's potent cast. For Fans Only.

Sale Price 17.99
Buy Now
3rd Party 15.99
In Stock.
See what people are saying about this story or others
See Comments in Forum
Previous Next
Pre-Orders
Tomorrow's latest releases