Though Reginald Hudlin’s slick film succeeds as a courtroom yarn by supplying the requisite tension and twists, it fails to paint a full-bodied portrait of its titular character or provide much historical context. Marshall isn’t a bad film; it just doesn't appropriately honor its subject. As a Blu-ray, the video transfer is stunning at times while the audio supplies clear, well-modulated sound, but there are no bonus features. This release is worth a look.

When I first heard about director Reginald Hudlin‘s film about Thurgood Marshall's early years as an attorney for the NAACP (National Association for the Advancement of Colored People), I was anxious to see it. As the first black justice of the U.S. Supreme Court and the lawyer who argued the landmark anti-segregation case Brown v. Board of Education before that body, Marshall looms large in American history, and the important trail he blazed helped fuel and advance the civil rights movement in our country. I looked forward to learning about Marshall's roots and how he worked his way up through the ranks fighting racial injustice. I wanted to know what made him tick, what inspired him to forge ahead despite constant and intense adversity. And I wanted to watch him in action, arguing passionately for his cause and gaining his footing on the national stage.

Unfortunately, I didn't get to see that film.

Oh, I saw Marshall all right. But what I saw didn't have much to do with the man himself. As embodied by Chadwick Boseman, Marshall makes a dashing figure and garners plenty of screen time. Yet we learn very little about him and rarely witness the admirable qualities that would propel him to the zenith of his profession. What we get instead is an entertaining, Perry Mason-like courtroom drama with a titillating backstory that could have easily played as an episode of TV’s Law & Order. And Marshall doesn't even get to try the case! Muzzled by the pompous, prejudicial judge who presides over the proceedings, Marshall is reduced to whispering instructions to his green co-counsel, who ends up grabbing the spotlight. At times, the focus of Marshall drifts so far away from Marshall, he almost becomes a supporting character in his own film.

Marshall’s job is to represent people “falsely accused of a crime because of their race,” and for a couple of fleeting moments at the film's start, we see him doing just that. Yet soon he’s dispatched by the NAACP to Greenwich, a snooty, intolerant community in southwestern Connecticut (I should know; I grew up in the town next to it). There he meets insurance lawyer Sam Friedman (Josh Gad), who’s been roped into helping Marshall apply for temporary admittance to the Connecticut bar so he can defend Joseph Spell (Sterling K. Brown), a black chauffeur accused of raping and then trying to murder his white married employer, Eleanor Strubing (Kate Hudson), a rich, reputable socialite. The stern judge (James Cromwell) reluctantly grants Marshall’s request for admittance, but forbids him to “speak, argue, or examine witnesses” during the trial, thus putting the burden of Spell’s defense on the inexperienced Friedman, who has never before tried a criminal case.

Marshall acts as both Svengali and Cyrano de Bergerac to Friedman, molding his courtroom personality and feeding him lines to say. Friedman appreciates the help, and because he regularly battles anti-Semitism, he can relate to the prejudice Marshall has learned to endure. Their shared experiences of bigotry spawn a kinship that grows deeper as the explosive trial gains steam. Yet as Spell vociferously proclaims his innocence, his legal team begins to question the veracity of his story and whether he's harboring a dark secret.

Marshall moves swiftly along, aided by an intriguing story and colorful performances. Boseman, who's made a habit of portraying real-life characters from baseball great Jackie Robinson to music legend James Brown, projects integrity and strength, but the role is sketchily drawn and lacks dimension. Gad overshadows him with a showier part, and Brown is appropriately intense as the brooding, manipulated chauffeur. Unfortunately, Hudson plays Mrs. Strubing like a film noir femme fatale, and her histrionics cheapen the racially charged themes underscoring the drama.

Interestingly, the structure of Marshall strongly resembles John Ford's Young Mr. Lincoln, a film I recently reviewed that charts the personal and professional development of Abraham Lincoln. Both movies focus on a pivotal trial that helped define their subjects, but unlike Marshall, Young Mr. Lincoln spends more time examining Lincoln's personality, insecurities, courage, and ingenuity, so we get to know him Intimately. Marshall favors plot over character, and as a result of that misguided decision, we never get a clear picture of the film's titular figure. Why doesn't the story get under Marshall's skin or depict his early struggles? Why can't we see Marshall arguing before the Supreme Court (which he did prior to the Strubing case)? We're told this man is a lofty lawyer, but we only catch a glimpse of him in action. We know he's a passionate champion of racial equality, but never witness any of the difficult experiences that shaped that attitude or see him protesting for the cause.

It's okay not to be a biopic, but then don't bill yourself as one. Other films with similar one-word titles - Capote, Frida, Gandhi, Patton, Ali, Milk, and Chaplin, to name but a very few - don't chronicle every moment of their subject's lives, but they do paint full-bodied, in-depth, often nuanced, and strikingly vivid portraits. Is it wrong to assume a film that calls itself Marshall - especially when it's written in big, bold, red, block letters - would be all about Marshall? And when the movie doesn't meet those expectations, it's hard not to feel frustrated and a little cheated. (At times, I thought the film should have been titled Friedman.) I admit I was annoyed after Marshall ended, because I didn't know anything more about Marshall than I did two hours before. Was I entertained? Yes. I love a good mystery. But this isn't Murder on the Orient Express. I expected to learn something about the man, and the only man I really learned about was Friedman.

Marshall is a fine motion picture for what it is. Yet what it is is not what it proclaims itself to be. Maybe someday we'll get the film Marshall should have been. I hope so. Thurgood Marshall deserves at least that. 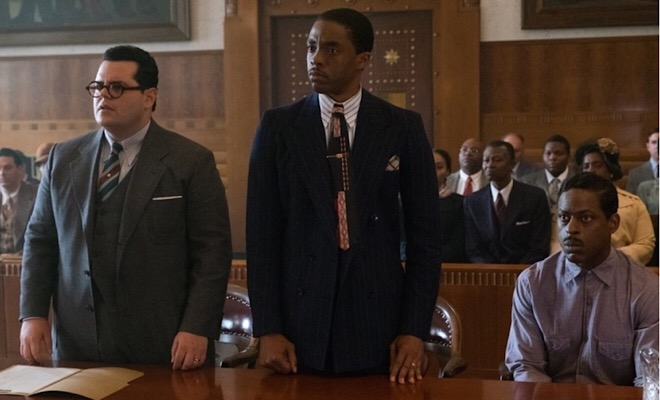 Marshall arrives on Blu-ray packaged in a standard case inside a sleeve. A leaflet containing the code to access the Movies Anywhere digital copy and a standard-def DVD are tucked inside the front cover. Video codec is 1080p/AVC MPEG-4 and audio is DTS-HD Master Audio 5.1. Once inserted into a player, previews for Thank You for Your Service, American Made, and Brad’s Status precede the static menu with music.

Slick, vibrant, and crisply detailed, Universal's 1080p/AVC MPEG-4 transfer brings Marshall to brilliant life. Crystal clarity, excellent contrast, and vivid colors lend the image a dimensional quality that makes the on-screen action more immediate. Black levels are rich and weighty, whites are bright but never bloom, patterns resist shimmering, and flesh tones remain natural and stable throughout. Close-ups are especially impressive. Individual pores and facial stubble are razor sharp, and wardrobe textures are easily discernible. Background details show up nicely, shadow delineation is strong, and not a single nick or mark sullies the pristine source material. This transfer is Marshall’s best asset, and it will look stunning on any display.

The 5.1 DTS-HD Master Audio track supplies clear, well-modulated sound, but there’s little surround presence in the mix. Noticeable stereo separation across the front channels nicely widens the audioscape while heightening the impact of sonic nuances, and a healthy dynamic scale embraces all the highs and lows without any distortion. Solid fidelity brings plenty of presence and depth to Marcus Miller’s music score, and all the dialogue is easy to understand. The Marshall soundtrack isn’t particularly active, but the track meets any of its rigors with ease.

No supplements whatsoever are included on the disc, and that’s a shame, considering the story’s historical nature and social relevance. Forget a puffy behind-the-scenes featurette; how about an audio commentary from the director or a brief profile of Thurgood Marshall? Anything that might provide additional context and/or perspective on this important subject and American icon would have been appreciated.

If you think Marshall will be a traditional biopic charting the early years of future Supreme Court Justice Thurgood Marshall, you’ll be bitterly disappointed. Though Reginald Hudlin’s slick film succeeds as a courtroom yarn by supplying the requisite tension and twists, it fails to paint a full-bodied portrait of its titular character or provide much historical context. Chadwick Boseman makes an attractive Marshall, but he’s betrayed by a weak script that cares more about a popcorn plot than honoring an admirable, influential American. Adding insult to injury, Universal includes no extras on this Blu-ray release, although a stunning video transfer and smooth audio make this disc a pleasure to watch. Marshall isn’t a bad film, it just doesn't appropriately honor its subject. So if you‘re okay with that, this period drama is definitely worth a look.