Wind River is a chilling thriller that follows a rookie FBI agent (Elizabeth Olsen) who teams up with a game tracker with deep community ties and a haunted past (Jeremy Renner) to investigate the mysterious killing of a local girl on a remote Native American reservation.

Murder mysteries are usually entertaining intellectual exercises that feature an intricate plot and mandatory twist ending, but they rarely have much of a heart...or soul. Wind River is different. Though it faithfully follows the genre’s conventions, it veers off the well-worn path to sensitively examine disturbing issues our xenophobic mainstream society all too often ignores. Take away the themes of racism, sexism, hypocrisy, and neglect and Wind River becomes just another over-the-top thriller. But with them, it rises above the muck and stands tall as a potent, affecting drama.

Just as he did in his scripts for Sicario and the Oscar-nominated Hell or High Water, writer-director Taylor Sheridan creates conflicted, multi-dimensional characters who add depth and meaning to his violent tales. Here, he searingly examines the forgotten Native American men and women who seem trapped on poverty-stricken reservations and torn between a loyalty to their culture and a desire to leave behind a dead-end existence often marked by drug and alcohol abuse and a dearth of opportunity that prevent them from pursuing a more prosperous and fulfilling life. Theirs is a sad story with no easy answers that is too often overlooked, but Sheridan’s passionate commitment to it oozes from almost every frame of Wind River.

The “inspired by actual events” title card that opens the film doesn’t refer to a single incident, but rather an ongoing plague of mistreatment and indifference that afflicts a large swath of the Native American population. U.S. Fish and Wildlife service agent Cory Lambert (Jeremy Renner) is all too familiar with the situation, and when he discovers the frozen, bloody body of a Native American teen in the remote and snowy wilderness of the Wind River Reservation in Wyoming, it brings back horrific memories of his own teenage daughter’s death under similar circumstances a few years before. Jane Banner (Elizabeth Olsen), a young FBI agent reminiscent of Clarice Starling is dispatched to the area to investigate the crime, and with Cory and Sheriff Ben (Graham Greene), a ranking member of the reservation’s police force, as her guides, she navigates the unfamiliar terrain and learns about the foreign society into which she’s been unceremoniously thrust.

The tight-lipped, insular community views Jane with suspicion, and those she interviews are reticent to reveal much information to an outsider who represents the government that systematically represses them. Yet Jane remains undaunted and forges ahead with her probe, soon learning the young victim was sexually assaulted before her death. Initial information leads her to believe the girl’s much older boyfriend might be the culprit, but when his naked, badly beaten body also turns up in the snow, the focus shifts to a remote oil drilling site where the boyfriend worked as a security guard. And it‘s there that the mystery begins to unravel.

Sheridan, in only his second directorial outing, takes a slow-burn approach, methodically immersing us in the depressed atmosphere that consumes the Native American characters. We feel their hopelessness, resentment, bitterness, and desperate need to escape their confinement. He also insightfully depicts the cultural divide between native and white Americans and the resultant tension that undermines their relationships, as well as the bureaucratic red tape that so often impedes investigations on Native American soil. All of these elements enhance the film’s relevance and lend it an emotional resonance that overshadows its conventional climax and lingers long after the closing credits roll.

Sometimes a mystery is more interesting than its resolution, and that’s exactly the case here. The violent carnage that ultimately overtakes Wind River is shocking and powerful, but also somewhat cartoonish, straining credulity and cheapening the thoughtful drama that comes before and after it. Yes, it’s cathartic and part of it is purposeful, but it’s all a bit too much, especially for such a nuanced, message-oriented film.

Renner and Olsen may have co-starred in a couple of Avengers movies, but they leave their makeup and costumes at the door, filing sober, straightforward performances that reflect their deep respect for the material. Renner is especially affecting, projecting an admirable stoicism that belies the anguish and disillusionment buried inside him. He and Olsen share a comfortable chemistry that serves the story well, and Greene brings a penetrating calm and wry humor to the proceedings, crafting a performance that’s far more detailed than it looks.

Wind River deftly uses the murder mystery angle to call our attention to some ugly truths that have been swept under the rug for far too long. Whether the film will effect any change remains to be seen, but its largely poetic presentation hammers some key points home. This is not a film for the faint of heart - it is a thriller after all - but if you can get past the violence, you'll find an engrossing story that packs more than the usual visceral punch. Wind River carries a big stick, but the bulk of its power comes from the moments when it speaks oh so softly. 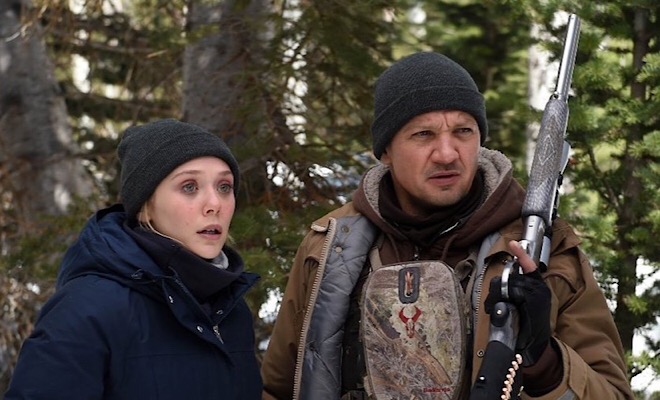 Wind River arrives on Blu-ray packaged in a standard case inside a sleeve. A leaflet containing a code to access the Digital HD Ultraviolet copy is tucked inside the front cover. Video codec is 1080p/AVC MPEG-4 and audio is DTS-HD Master Audio 5.1. Once the disc is inserted into the player, a preview for The Hero precedes the full-motion menu with music.

Films set in the dead of winter often appear drab and sterile, and Wind River is no exception, yet the excellent 1080p/AVC MPEG-4 transfer accurately renders the bleak atmosphere. Superior clarity and contrast allow us to drink in all the details of the vast frigid landscape, and not a stitch of grain adds any warmth to the frame. The color palette remains rather wan throughout, but during the fleeting moments of brilliant sunshine some deeper hues pop up. Snow, of course, is omnipresent, but the white levels are consistently pleasing, exhibiting appropriate texture and never dissolving into an indistinct mess. Individual flakes are well defined during the blizzard sequences, and close-ups show off facial hair and stubble well. Blacks are strong, too, as are the deep blues of the police uniforms, and background elements are always easy to discern. Not a nick or errant mark dots the pristine source material, and no digital enhancements could be detected. This high-quality transfer presents a vibrant, bold picture, yet its beautiful aesthetic never minimizes the poverty and desolation depicted on screen.

Powerful, room-shaking audio provides a striking contrast to the tranquil visuals, and the result is an immersive audio experience that ramps up the impact of the film’s drama. The DTS-HD Master Audio 5.1 track flaunts a palpable surround presence, as subtle atmospherics dance across the rear speakers and distinct stereo separation up front widens the soundscape. Thudding bass frequencies grab attention, as do eruptive, heart-stopping gunshots that sound more like cannon-fire. A wide dynamic scale handles all the booming elements without a hint of distortion, and solid fidelity and tonal depth complement the meditative music score. Though some of the dialogue is spoken quite softly and can be a bit difficult to comprehend, the bulk of exchanges are crisp, clear, and well prioritized. The visuals may seem slightly drab, but this potent audio track is anything but, and will certainly make you sit up and take notice.

Just a couple of extras are included on the disc. An audio commentary with director Taylor Sheridan would have been a nice addition, but no such luck.

Behind-the-Scenes Video Gallery (HD, 10 minutes) - Three separate segments focus on Renner, Olsen, and Sheridan, respectively, and feature their perspectives on the film. Renner talks about how he related to his role and the strength and vulnerability of Sheridan, while Olsen analyzes her character and expresses her dislike of cold weather. Sheridan shares his personal experience in the region, as well as his desire to depict its reality instead of a prevailing perception of it, and expresses his hope that the film will effect some positive change.

Wind River is a riveting murder mystery and detective story, but some potent themes percolate beneath its surface, elevating Taylor Sheridan’s violent thriller above other movies in its class. The story of an FBI agent’s quest to bring to justice the killer of a sexually abused Native American woman who’s found dead in the frigid wilderness exposes disturbing issues that resonate far beyond this absorbing narrative. Excellent performances and stellar direction distinguish the film, as do the first-class video and audio transfers on the Lionsgate Blu-ray release. Though the climax may be overblown, it doesn’t cheapen the sober message of this well-made motion picture, which comes highly recommended.