A classic potboiler, Forever Amber may not possess the same titillation factor as it did upon its premiere in 1947, but director Otto Preminger’s adaptation of Kathleen Winsor’s bestselling novel remains good, trashy fun. The video may lack Technicolor's customary pop, but the transfer on Twilight Time’s Blu-ray release is very watchable, and the lovely Linda Darnell and tantalizing plot make this steamy soap opera worth a look.

It's no coincidence the cover art for Forever Amber focuses on the elegantly draped torso of its glamorous star, Linda Darnell, because no movie in Hollywood history represents that racy genre of romantic fiction known as the "bodice-ripper" better than this spicy tale of illicit sex and power in Restoration England. Based on the 972-page novel by 24-year-old author Kathleen Winsor, Forever Amber was the top-grossing film of 1947, and even though director Otto Preminger's screen adaptation severely waters down many of the book's risqué elements, it still generated plenty of controversy upon its release. The Catholic Legion of Decency initially condemned the movie, an act that only increased its notoriety and appeal, but seen through today’s far more permissive moral prism, the story seems rather tepid, making one wonder what all the fuss was about.

The fuss began when Winsor’s salacious novel took the country by storm in 1944. Banned in 14 states as pornography, Forever Amber nevertheless became the decade’s best-selling book and instantly piqued the interest of 20th Century-Fox studio chief Darryl F. Zanuck, who called it “a powerfully dramatic story of a strange, glorious, glamorous young girl who slept with seven men, but only loved one of them.” The screenplay faced intense censorship scrutiny from the outset, but despite the interference, it preserves Winsor’s narrative framework. Yes, the script substantially reduces the number of Amber’s sexual liaisons and concludes long before the story in the novel ends, but it’s still packed with drama, spectacle, romance, and historical strife.

Aside from a brief opening sequence set during England’s Civil War in 1644 when the infant Amber is deposited on a rural farmer’s doorstep, the film takes place after the House of Stuart, led by King Charles II (George Sanders), reclaims the throne from revolutionary Oliver Cromwell. Now 16, Amber (Darnell) brazenly rejects a marriage arranged by her adoptive father (Leo G. Carroll) so she can pursue grandiose dreams of wealth, finery, and elevated social standing in London. By chance, she meets Bruce Carlton (Cornel Wilde), a dashing royalist with whom she becomes quickly enamored, and impulsively follows him to the king’s court, where they begin a torrid affair. The romance ends when the king grants Bruce a long-desired sea commission, which leaves Amber adrift and vulnerable in London.

Hard times befall her, but the resilient Amber, who several months later gives birth to Bruce’s son, uses her wiles - and her body - to claw her way out of the gutter and climb the social ladder. Though she holds a blazing torch for Bruce and lives for the day when they will reunite, she has no compunction about using available men to further her agenda and pad her bank account. Bruce does return, but the conflict between the couple only intensifies, as secrets, intrigue, murder, an epidemic of bubonic plague, and the Great London Fire of 1666 both bring them together and rip them apart.

If you’re thinking this sounds a lot like Gone With the Wind, you’re right. Both films feature a beautiful, headstrong, industrious heroine who stops at nothing to get what she wants. Amber, just like Scarlett O'Hara, rises from the ashes like a phoenix through sheer strength of will and stakes her claim in a male-dominated world. She also pines unrequitedly for a man she can’t have. Both stories are set against a turbulent historical backdrop beset by social unrest, disease, and a massive fire, and both ultimately leave their leading ladies in limbo. Amber may not defiantly proclaim “Tomorrow is another day” before the final fadeout, but that’s definitely the implication.

But wait. The similarities don’t end there. Both productions are adapted from thousand-page first novels by inexperienced female writers that became runaway bestsellers, and both mounted large-scale talent searches for an unknown to play the starring role. In Amber’s case, a young British actress named Peggy Cummins originally won the part, but proved too inexperienced, thus paving the way for Darnell, who files a seductive, impassioned portrayal that’s sufficiently magnetic, but lacks the dimension and nuance necessary to bring such a larger-than-life character down to earth. Nevertheless, Amber would prove to be Darnell’s greatest role, and she embraces it - and all the trimmings - with relish.

I’ve always regarded Wilde as a bland, wooden actor, and that’s exactly what he is here. There’s little chemistry between him and Darnell (he did better with Gene Tierney in Leave Her to Heaven), which makes it difficult to fully invest in their romance or care whether they end up together. Without a strong male presence (Amber’s other lovers are equally generic), her conquests lack gravitas, and passions that should sizzle fizzle. Though Sanders looks ridiculous in his curly, shoulder-length Restoration locks, he makes an appropriately sly, scornful Charles II, and it’s a kick to see a young Jessica Tandy trying to make the best of a throwaway role as Amber’s gal Friday.

Preminger’s by-the-numbers direction lacks panache (the fact he took over the reins from John M. Stahl 39 days into shooting may explain why), but he nicely captures the era’s grit and splendor. Though the adaptation wisely omits numerous lascivious episodes (the novel’s synopsis is truly outrageous and preposterous), Preminger can’t overcome the tale’s tawdry nature or contain its far-fetched plot. At its core, Forever Amber is a bloated soap opera - plain and simple - and dressing it up in period costumes and connecting it to history will never transform it into anything else. Like many of Amber’s affairs, it’s fun while it lasts, but eminently forgettable. 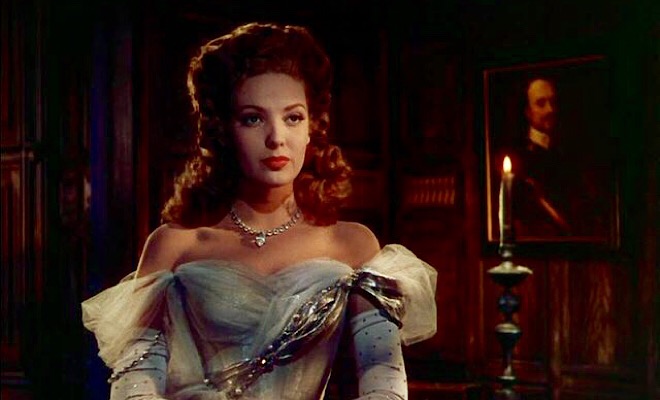 Forever Amber arrives on Blu-ray in a limited to 3,000 edition packaged in a standard clear case. An eight-page booklet featuring an essay by film historian Julie Kirgo, several tinted color photos, and a reproduction of the movie’s poster art is tucked inside the front cover. Video codec is 1080p/AVC MPEG-4 and audio is DTS-HD Master Audio 1.0. Once the disc is inserted into the player, the static menu without music immediately pops up; no previews or promos precede it.

Before this viewing, I had never seen Forever Amber before, so I can’t assess how closely this 1080p/AVC MPEG-4 transfer replicates the movie’s original look. Though contrast and clarity are excellent and a lovely grain structure preserves the film-like feel, the image doesn’t exude the vibrancy and intense levels of saturation usually associated with three-strip Technicolor. Forever Amber is a natural for color photography because of its historical nature, grandiose set pieces, and the palpable allure of star Linda Darnell, but the picture doesn’t showcase these elements like I expected and hoped it would. Bluish tones predominate, heightening the air of artificiality that hangs over the film, and the source material, while free of any substantive imperfections, appears a tad faded, lending the picture a somewhat anemic quality that’s at odds with the racy narrative. Black levels are rich and deep and whites are appropriately bright, but flesh tones err slightly toward the orange side. Background details show up nicely, shadow delineation is solid, and close-ups, especially those of Darnell, are typically lush and glamorous. The credentials of cinematographer Leon Shamroy, a four-time Oscar winner, cannot be questioned, but given the exceptional color photography on Leave Her to Heaven, which won him an Academy Award two years earlier, the pale complexion of Forever Amber is quite puzzling. The film does have its sumptuous moments, but the degree of visual stimulation is sadly lacking overall, and that diminishes the movie’s impact.

The DTS-HD Master Audio 1.0 track supplies clear, well-modulated sound that shows off composer David Raksin’s Oscar-nominated score to superior advantage. A wide dynamic scale handles all of its soaring highs and weighty lows without a hint of distortion, and excellent fidelity allows the swelling strains to fill the room with ease. Atmospherics like rain and flames are crisp and distinct, and subtleties are well rendered. All the dialogue is clear, well prioritized, and easy to comprehend, and no age-related hiss, pops, or crackles intrude. Though a 5.1 remix would certainly enhance the film’s epic feel, this mono track is more than adequate and serves Forever Amber well.

Documentary: Linda Darnell: Hollywood's Fallen Angel (HD, 44 minutes) - This 1999 documentary, a particularly riveting installment of A&E's Biography series, also appears on Fox's Blu-ray release of A Letter to Three Wives. Film clips, photos, and interviews with Darnell's biographer, adopted daughter, and sister bring this underrated movie queen to life, painting an absorbing portrait of a gorgeous, talented, yet often unhappy and tormented woman who weathered more than her share of Hollywood hard knocks. The profile details Darnell's exploitation by her pushy stage mother; discovery by a Fox talent scout at the tender age of 15; marriage at 19 to a 42-year-old cameraman; on-screen transformation from "virgin" to "slut"; ill-fated romances with billionaire Howard Hughes and writer-director Joseph Mankiewicz (termed by some as "the love of her life"); and debilitating alcoholism. We learn how the demise of the studio system in the early 1950s left her career in limbo, and how financial mismanagement left her, for a time, nearly destitute. Tragically, Darnell died in a fire at a friend's townhouse in suburban Chicago in 1965 at age 41, yet this fine documentary renews interest in one of Hollywood's all-but-forgotten leading ladies, and makes us properly appreciate her contributions to many fine films.

Isolated Music Track - The lush, romantic strains of David Raksin's music score can be enjoyed without any intruding dialogue or effects on this isolated track.

Forever Amber is a classic potboiler that titillated 1947 audiences to the max. Today’s viewers won’t get the same charge out of it, but Otto Preminger’s adaptation of Kathleen Winsor’s risqué bestseller about a wily woman who stops at nothing to get what she wants remains good, trashy fun. The video transfer on Twilight Time’s Blu-ray presentation won’t wow lovers of three-strip Technicolor, but it‘s very watchable, and solid audio nicely honors David Raksin’s score. Though there’s not much substance to Forever Amber, its gorgeous leading lady and tantalizing plot make this steamy soap opera still worth a look.