Perky, overachieving Tracy Flick (Reese Witherspoon) gets on the nerves of history teacher Jim McAllister (Matthew Broderick) to begin with, but after she launches her campaign for high-school president and his personal life starts to fall apart, things spiral out of control. In Alexander Payne’s satire Election, the teacher becomes unhealthily obsessed with cutting his student down to size, covertly backing a spoiler candidate to stop her from steamrolling to victory, and putting in motion a series of dirty tricks and reckless promises with uncanny real-world political parallels. Adapting a then-unpublished novel by Tom Perrotta, Payne grounds the absurdity of his central dynamic in the recognizable—the setting is his hometown of Omaha, and the accomplished cast is rounded out with nonprofessionals—and distills his closely observed take on deeply flawed humanity to its bitter but stealthily sympathetic essence

When I last reviewed Alexander Payne's razor-sharp political satire Election for the initial Blu-ray release in 2009, the movie had just hit its ten-year anniversary and I commented that it had proven almost eerily prescient regarding the so-called "voting irregularities" of the real Presidential election in 2000. Jumping ahead close to another decade, it's tempting to view the movie through the filter of the 2016 race. Indeed, some parallels hit remarkably close to home.

[Warning: Some plot spoilers follow. If you haven't already seen the film, refer to my 2009 Blu-ray review for a typical plot recap and general overview.]

Without question, Reese Witherpoon's Tracy Flick character was modeled to some significant degree on then-First Lady Hillary Clinton. Tracy is presented as a go-getting overachiever with huge ambitions and the bull-headed determination to make them happen. She's a born politician, in both the positive and negative connotations that might suggest. She has extensive knowledge of and passion for rules and policies when they suit her needs, and casually disregards them when they don't. She's extremely bright and talented, but frequently unlikeable on a personal level, has skeletons in her closet she doesn't want to acknowledge, and her ethics are slippery at best. In many ways, Tracy is both the hero and the villain of the film, and her undoing (in as much as that she gets one) is largely her own fault. Had she just been a little warmer in temperament and a lot more honest, she could rule the world.

Despite being the only remotely qualified candidate running for Student Government President of her high school, Tracy faces unexpectedly difficult competition from an outright dolt who is in no way her equal and is utterly unsuited for the job he wants. Nonetheless, Paul Metzler (Chris Klein) has a populist appeal that Tracy will never achieve herself, forcing her to be as ruthless as possible in her campaign against him. Ultimately, even with all her cunning, she falls short of total victory.

All of this sounds familiar, right? I haven't even mentioned the campaign interference and vote-rigging from an outside party (in this case a disgruntled Social Studies teacher played by Matthew Broderick). It's kind of amazing that this movie was made back in 1999.

Where this convenient and amusing analogy breaks down a little is that Paul, the competitor, isn't a virulent narcissist, pathological liar, or abusive bully. He's basically just a likeable dope who means well but is in way over his head and allows himself to be guided by the wrong people with ill intentions. In that regard, he seems to have stepped out of the 2000 or 2004 elections rather than 2016. Also, the film allows Tracy to persevere through her comeuppance and find a path to get what she wants. That didn't happen in real life. (Whether you consider that a good or bad thing will depend on your own political leanings.)

Reading this level of foresight into the movie is a fun game but, obviously, no one who made Election was psychic. You won't find a perfect one-to-one correspondence with future real world events in the film. What you will find is a wealth of insight into and clever commentary on politics and human nature, enough that the story will very likely still seem familiar and applicable to cycle after cycle of real political elections for decades to come. That's quite an achievement for a little comedy produced by MTV, of all sources, that was a box office failure in its day.

Election was previously released on Blu-ray by Paramount Home Entertainment in 2009. Eight years later, the film enters the Criterion Collection as spine #904. The disc comes packaged in one of Criterion's clear keepcases, with cover art that's substantially better than the amateurish PhotoShop embarrassment on Paramount's copy. Inside the case is a fold-out booklet with a spoiler-heavy essay by film critic Dana Stevens. The disc itself has a simple static main menu.

Paramount's 2009 Blu-ray of Election looked pretty good on the whole, aside from some dirt and speckling on the film elements. Honestly, had Criterion taken that master and applied some digital clean-up to remove the unwanted detritus, I probably would have commended the result. Unwilling to cut corners, the label instead commissioned a new 4k master supervised by director Alexander Payne. One would think that should make the Criterion edition a definitive presentation for the movie. Perhaps it does. However, in comparing the two discs, the new transfer makes mostly subtle improvements while taking one step, if not backwards, then at least sideways.

Both discs are framed at a 2.35:1 aspect ratio (which makes both slightly off from the actual 2.40:1 theatrical standard), but have some small geometry differences within that image area. That's not unusual for two different film scans performed on different equipment. Criterion's 1080p/AVC MPEG-4 encode exhibits a very good, frequently excellent sense of fine object detail, but the improvement over Paramount's version is more incremental than dramatic. Frankly, I doubt I would have noticed the difference in detail without side-by-side screenshots. More importantly, the Criterion transfer is free of dirt and debris. The movie's photography is often very grainy, especially during optical effects such as the opening credits or dissolve transitions. I think Criterion's encode handles that grain a little better.

The most striking difference between the two discs is that the Criterion transfer has a cooler color temperature with a blue push that slightly bleaches flesh tones and other colors. It's prevalent enough that I noticed it even without a comparison. Given the choice, I feel that Paramount's warmer colors look more natural and more pleasing. However, this isn't some gaudy teal-and-orange makeover. Judged on their own, the Criterion colors are fine, if a little pale. Some viewers may even prefer them. 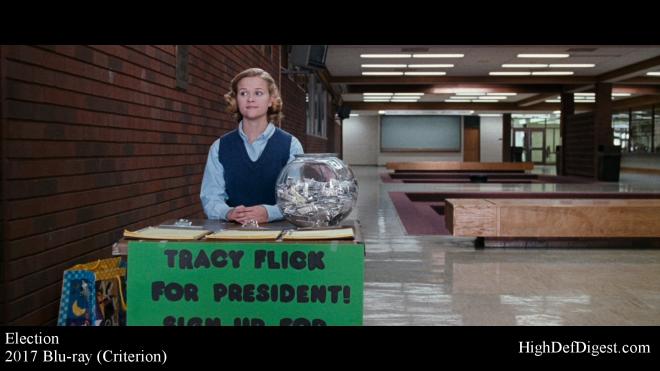 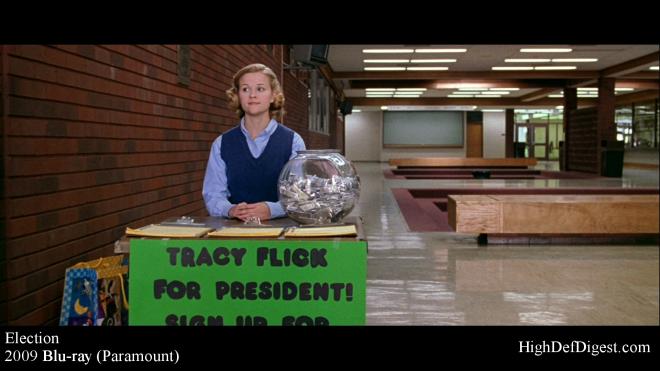 The liner notes in the accompanying booklet claim that the Blu-ray's DTS-HD Master Audio 5.1 soundtrack was also remastered from the original 35mm magnetic tracks. The prior Paramount Blu-ray was presented in a 5.0 configuration with no LFE channel, but don't get too excited about the extra .1 in this version. The movie still has negligible bass activity and limited dynamic range.

In most respects, this is a very standard comedy mix, primarily focused on dialogue. The surround channels are mostly reserved for a little music bleed and ambient noises. Beyond some crowd sounds in the school auditorium, the mix doesn't get too inventive or exciting.

For what it is, the dialogue is always crisp and intelligible, and the musical score is warm and rich. The soundtrack supports the movie adequately, even if it never calls attention to itself. 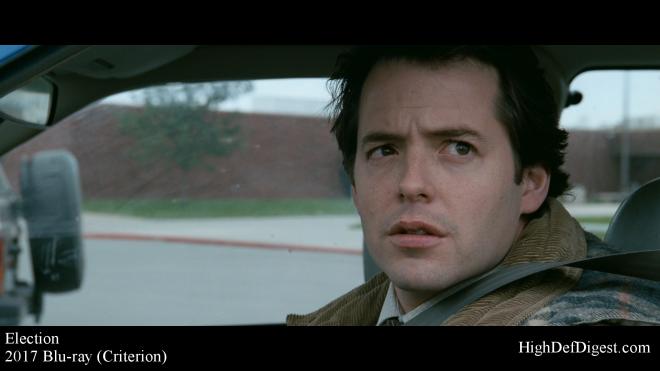 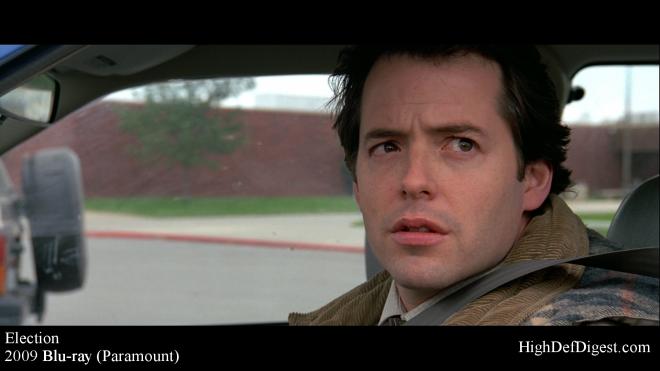 The only extra content Paramount ever granted Election was an audio commentary. Criterion could better that effort without hardly trying. Unfortunately, while certainly better, the bonus package on the new Blu-ray is still disappointingly thin. 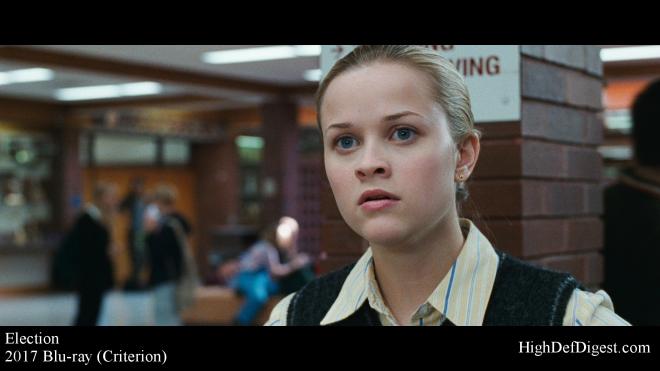 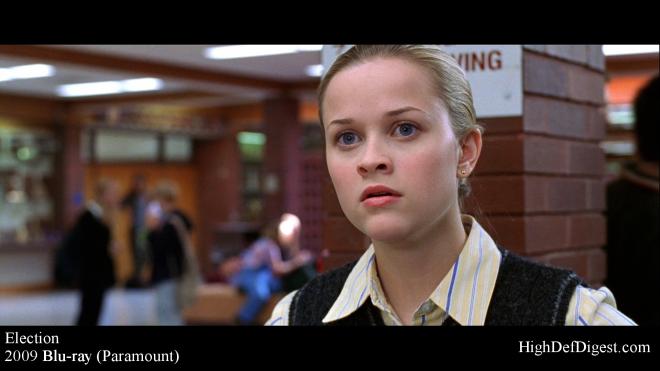 For a movie designed as an exaggerated parody of American politics, Alexander Payne's Election has only grown in relevance over the last two decades. It's also still simply a damn funny comedy, even if you choose to ignore any real-world parallels.

On technical and even content levels, the new Criterion edition offers only a modest upgrade over the 2009 Blu-ray from Paramount. It has a strong, if imperfect, video transfer and a small assortment of moderately interesting bonus features, but the older disc was decent enough and can be purchased a lot cheaper today. However, if the prestige of being part of the Criterion Collection can bring a little still-needed attention to the movie, that can only be a good thing.