Valerian and the City of a Thousand Planets

In the 28th century, Valerian (Dane DeHaan) and Laureline (Cara Delevingne) are a team of special operatives charged with maintaining order throughout the human territories. Under assignment from the Minister of Defense, the two embark on a mission to the astonishing city of Alpha—an ever-expanding metropolis where species from all over the universe have converged over centuries to share knowledge, intelligence, and cultures with each other. There is a mystery at the center of Alpha, a dark force which threatens the peaceful existence of the City of a Thousand Planets, and Valerian and Laureline must race to identify the marauding menace and safeguard not just Alpha, but the future of the universe.

While I readily admit the following statement is much too soon of a prediction to be making, I'm willing to wager Valerian and the City of a Thousand Planets could potentially find a cult following. Frankly, the entire production shares familiar trappings to two other dearly-beloved Luc Besson favorites: The Fifth Element and Léon: The Professional. But that's not to say this sci-fi adventure flick is nearly as good as either of those, both of which have rightly earned their cult classic status. Rather, Besson's latest actioner, which bombed at the worldwide box office, was welcomed with a generally lukewarm reception, similar to those movies except this one hardly received the same level of praise. Ultimately, time favored those movies, and I have a sneaking suspicion the same could happen to this one. A significant, if not also major difference, is the production being based on the French sci-fi comics, which are obviously not popular or really even known in the U.S., presumably from Besson's childhood, making it one of the most expensive pet projects ever brought to fruition.

Moreover, Valerian is, to some degree, a blend of those aforementioned movies, arguably Besson's two best-known features. The plot revolves around the clumsy, awkward romance of the two leads, Major Valerian (Dane DeHaan) and Sergeant Laureline (Cara Delevingne). Only, here, we are told the latter refuses the aggressive advances of the former because he's a near-narcissistic, monogamy-hating womanizer. And given the recent news about inappropriate conduct that's been fermenting throughout Hollywood, this character trait is hardly an endearing quality most audiences would want to champion at the moment. Granted, it's easy to see where Besson, who also wrote the script, is going with this — a sadly clichéd trope for a predictable character development — the first mark on a checklist of several flaws. And no offense to DeHaan since he typically delivers a good performance, but he doesn't exactly have the screen presence or even the natural charm to make the character believable. Basically, Valerian's pompous boasting and self-importance comes off as artificial, more of a charlatan than a praiseworthy hero. 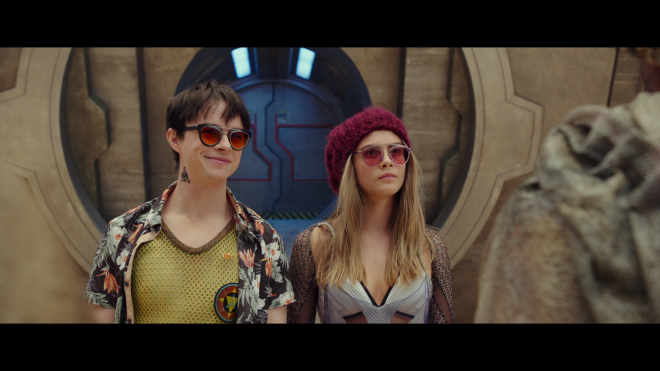 Unfortunately, this back and forth romance between the two young actors further fails in the flat, dead-eyed performance of model-turned-actress Delevingne, who was more effective under layers of makeup and CGI as Enchantress in Suicide Squad. Throughout the film's 137-minute runtime, Delevingne is better at being more visibly frustrated taking orders from her pretentious ranking officer than she is at feigning a love interest. The chemistry between the two is so wide and empty, the International Space Station, which has evolved into a gigantic space-traveling city, could comfortably park betwixt them. All the while, we're meant to believe the two soldiers are simultaneously solving a massive government conspiracy. It's worth noting the pair inadvertently stumble upon the mystery by sheer happenstance rather than clever detective work, exposing another troubling drawback of the film. The central premise of uncovering the truth behind a believed extinct species of primitive aliens is largely driven by coincidences, little blunders and various flukes. The story is largely, if not entirely, motivated by several much-too-convenient plot devices.

It may seem as though I'm harshly hating on Valerian, but truth be told, I was surprisingly entertained by this silly sci-fi adventure despite its many glaring issues. The wildly imaginative visuals, reminiscent of the eye-catching spectacle of The Fifth Element, is ultimately the production's winning charming. As if from the feverish revelry of a lunatic talking to himself at a park bench, the movie is essentially a cavalcade of bizarre, wacky creatures brought to life thanks to some incredibly talented computer animators and stage designers. And this inventively whimsical vision is brilliantly photographed by long-time collaborator Thierry Arbogast (Lucy, 3 Days to Kill), turning what could have been a far worse film into a tolerably elaborate curiosity. Besson and his crew unapologetically embrace the preposterous without the slightest sense of cynicism, delivering an amusingly straightforward, if also imperfect, popcorn flick. And somehow, the French filmmaker also convinced John Goodman, Ethan Hawke, Rutger Hauer, Rihanna and Clive Owen to join the fun. If for nothing else, Besson has given moviegoers a delightfully enjoyable bad movie.

Lionsgate Home Entertainment brings Valerian and the City of a Thousand Planets to Blu-ray as a two-disc combo pack with a flyer for a Digital HD Copy. Inside a blue, eco-cutout case with a glossy slipcover, a Region A locked, BD50 disc sits comfortably opposite a DVD copy of the movie. After several skippable previews, the disc goes straight to an animated menu with the usual options, full-motion clips and music.

Valerian rides into danger with a spectacular and often dazzling 1080p/AVC MPEG-4 encode, looking sharp and dapper for a majority of the runtime but occasionally goes a wee soft and schmaltzy around the edges. Fine lines are distinct, revealing the stitching and threading in the sometimes-silly costumes, and facial complexions appear healthy with lifelike textures that expose the smallest wrinkle and negligible blemish in the cast. On the whole, the many CG sequences are highly detailed, often laying bare the pipe and wire inners of Alpha or showing the well-defined gadgets and particulars of the various alien creatures. However, there are also times when those same sequences are a tad softer and when in contact with live-action.

Presented in 2.40:1 aspect ratio, the freshly-minted transfer also lands with excellent contrast and crisp, clean whites throughout, providing the HD presentation with a vivid and spirited quality that energizes the entire movie. Along with that, the photography of Thierry Arbogast displays a dazzling spectacle of flamboyant primaries from start to finish and a striking array of richly-saturated secondary hues that give the entire production a fun, animated feel. Brightness levels are equally strong with deep, inky blacks, which are greatly appreciated when our pair of heroines don their police-escort suits and in the Commander's robot soldiers. Sadly, shadows are a bit lackluster and murkier than preferred, sometimes flattening the image while still maintaining excellent detailing and clarity.

The imaginative sci-fi adventure flick crashes into home theaters with an excellent if also surprisingly lacking Dolby Atmos soundtrack. That level of surprise, of course, largely depends on expectations, but given the particular genre and the amount of on-screen action, there really isn't much activity in the overheads. On a few occasions, spaceships are heard zooming above the listening area, along with the pew-pew sounds of laser guns and the electric pings of computers in the control room, and debris from explosions can seem as though raining down in all directions. However, these moments ultimately feel far and few in between, and the ceiling channels are mostly silent throughout. The saving grace are the side and rear surrounds being employed more consistently and aggressively for generating an awesomely immersive soundfield, making the Dolby TrueHD 7.1 track the better, demo-worthy aural experience.

Imaging is also highly engaging and incredibly dynamic with lots of background activity that fluidly and seamlessly pans across the three front channels. Alexandre Desplat's score spreads across the screen with superb fidelity and outstanding balance while lightly bleeding into the front heights, exhibiting rich, detailed clarity in the mid-range. The dialogue and whispered conversations remain precise and never overwhelmed by the loudest action pieces. The low-end is robust and room-energizing, delivering a few wall-rattling moments the provide plenty of weight and depth though the bass never truly digs into the ultra-low region.

Enhancement Mode (HD): While watching the movie, owners can essentially interrupt it and access a variety of featurettes when icon pops up on screen.

Based on the French sci-fi comics, Valerian and the City of a Thousand Planets is the latest from visionary filmmaker Luc Besson. The film, sadly, failed to find an audience in theaters. On home video, it has the potential for gaining a cult following because, despite the production's many glaring issues, the wildly imaginative sci-fi adventure flick manages to be an entertaining, inventively whimsical vision that unapologetically embraces its preposterous premise. The Blu-ray arrives with an excellent video presentation and a solid Dolby Atmos soundtrack that adds to film's entertainment value. The overall package is recommended for Besson fans and makes a strong rental for the curious.