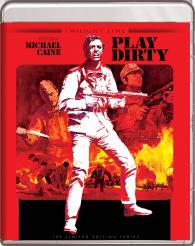 A superb cast topped by Michael Caine, Nigel Green, and Harry Andrews highlights classic director André De Toth’s last film, Play Dirty (1968), a combat film set in North Africa during World War II. The “heroes” here are vile, unsympathetic loners operating outside the mainstream military, in a narrative that plays both ends against the middle. Shot by Edward Scaife (The Dirty Dozen), and featuring a score from the sensational Michel Legrand.