Classic film director Raoul Walsh (High Sierra, The Man I Love) gives us his only 3D movie: the revenge Western, Gun Fury 3D (1953).  Rock Hudson stars as a young man left for dead after a stagecoach robbery; in fact very much alive, he sets out after the men who tried to kill him (including the likes of Philip Carey, Neville Brand, and a young Lee Marvin), who also happen to have kidnapped his sweetheart (Donna Reed).

Over the course of his 50-year directing career, Raoul Walsh helmed a staggering 138 films dating all the way back to 1914. D.W. Griffith was his mentor, and once sound came along, Walsh specialized in macho gangster, war, and western films, many of which showcase an array of legendary tough guys in some of their most iconic roles - James Cagney in White Heat, Humphrey Bogart in High Sierra, and Errol Flynn in They Died with Their Boots On. So it's no surprise a tidy little western called Gun Fury often flies under the radar in any discussion of Walsh's work. Though hardly groundbreaking, this formulaic genre entry epitomizes the director's brisk, no-nonsense style, and remains noteworthy as Walsh's only 3D film.

Gun Fury was shot three years before Rock Hudson starred in Giant, but it's hard to divorce the character he portrays, a young rancher named Ben Warren, from Edna Ferber's hero, Bick Benedict. Both men are proud, driven, and pig-headed, so when Ben is wounded and left for dead after a stagecoach robbery, he doesn't think twice about seeking revenge on his assailant, Frank Slayton (Philip Carey), a suave marauder who has also kidnapped Ben's fiancée, Jennifer Ballard (Donna Reed). Frank is used to taking what he wants, and after Jennifer catches his eye, he's determined to possess her, despite her steadfast commitment to Ben.

Frank and his band of hoods, who have knocked off a string of banks across the country, hope to escape to Mexico and drag Jennifer over the border with them. Their mad dash sparks a race against time for Ben, who tries to assemble a posse to intercept and capture them. Yet in true High Noon fashion, everyone he encounters finds some excuse not to help, until Ben hooks up with a cast-off cohort of Frank's gang and a stone-faced Native American with his own score to settle. Together, the trio sets off on a deadly mission, but will they reach Jennifer before it's too late?

Gun Fury is predictable in every category, and yet its entertainment value remains high. Fast-paced, lovely to look at (the film was shot on location in the heart of Arizona's red rock country near Sedona and makes excellent use of all the unspoiled, breathtaking vistas), and featuring some exciting fight scenes, the movie maintains interest despite a pedestrian, cliched story and stereotypical characters. Frank's bitterness over the Confederate loss in the Civil War, which fuels his criminal rampage, is the tale's most original aspect, but the narrative always takes a back seat to the visuals. Above all, this is a vehicle designed to show off scenery, action, the attractiveness of the film's stars, and - most important of all - 3D.

And it succeeds in those respects. Though its use of 3D isn't particularly creative (most of the effects are of the gimmicky, projectile variety), Gun Fury exhibits a palpable dimensionality that helps immerse us in the rugged surroundings and feel a part of the fisticuffs. Hudson wasn't yet a full-fledged superstar, but it's easy to see why he became one. Handsome, likable, and manly, he handles both his physical and romantic chores with ease, while the lovely Reed, who earlier the same year wrapped up the role that would soon win her a Best Supporting Actress Oscar in From Here to Eternity, tries her best to elevate her one-dimensional damsel-in-distress part.

Carey, who would later anchor the daytime soap One Life to Live for more than three decades, makes a formidable villain, as do Lee Marvin and Neville Brand in early menacing roles. In fact, all the actors inject plenty of spirit into a workmanlike film that may not rank as one of Walsh's best, but perfectly represents the director's style and cinematic viewpoint. Western fans may not be dazzled, but they'll certainly enjoy this lively, action-filled yarn...especially in 3D. 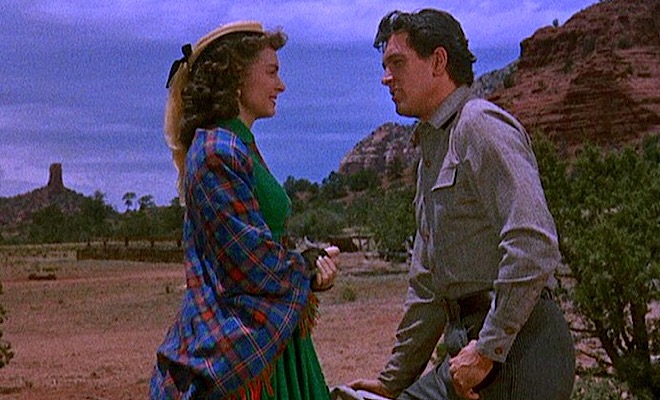 The 3D and 2D versions of Gun Fury arrive on Blu-ray in a limited to 3,000 edition packaged in a standard clear case. An eight-page booklet featuring an essay by film historian Julie Kirgo, a few tinted scene stills, and a reproduction of the movie's original poster art is tucked inside the front cover. Video codec is 1080p/MVC MPEG-4 for the 3D version and 1080p/AVC MPEG-4 for the 2D version, and audio is DTS-HD Master Audio 1.0. Once the disc is inserted into the player, the static menu without music immediately pops up; no previews or promos precede it.

Much to every classic film fan’s delight, Twilight Time continues to unearth and release 3D movies from the 1950s, and the 1080p/MVC MPEG-4 transfer for Gun Fury brings all the flavor of the Old West to dimensional life. Grain, brightness, and color levels all fluctuate (and 3D tends to emphasize any deficiencies), but the overall presentation is largely clean and smooth. Grain often appears heavier against solid backdrops like the deep blue sky, occasionally exuding a snowy texture, and flesh tones in early scenes look a bit brownish, but the rugged Sedona scenery is beautifully rendered, with lush greens and blues complementing the striking red rock formations. Rich blacks and crisp whites balance the picture, day for night sequences are perfectly pitched, sharp close-ups highlight fine facial features well, and only a few errant marks dot the print.

The 3D looks terrific throughout. Plenty of foreground dimension brings the image into the room, but the effect remains rather subtle. Director Raoul Walsh seems to prefer the wow factor, so whenever there’s a projectile in view, look out! A rattlesnake lurching toward us is especially jarring, and during various fight scenes, a knife, a few boulders, and other random objects hurtling through the air provoke surprise. (The opening scene, which documents the stagecoach arrival, is also quite effective.) All the 3D images are wonderfully distinct and no digital issues like crosstalk crop up. The 1080p/AVC MPEG-4 2D transfer is also quite pleasing, making this disc a winner all around.

Westerns always provide some sonic oomph, and this DTS-HD Master Audio 1.0 track takes full advantage of the opportunities, supplying clear, well-modulated sound. The crack of the whip, rumble of the stagecoach, and pop of the six-shooters are appropriately potent, while excellent fidelity and tonal depth distinguish the rousing music score, which fills the room with ease. A wide dynamic scale handles all the highs and lows without a hint of distortion, and all the dialogue is clear and easy to comprehend. Best of all, no age-related hiss, pops, or crackles are present. Vintage mono tracks are never very showy, but this one keeps us in the thick of the action and nicely complements the 3D images.

Only a couple of minor supplements are included on the disc, and they are exclusive to this high-def release (see below).

Though far from one of the best-known 3D flicks - or westerns - of the 1950s, Gun Fury nevertheless delivers the goods for fans of both genres. Director Raoul Walsh injects as much action, excitement, and visual stimulation as he can into an uninspired yarn that focuses on a rancher’s desperate search for his kidnapped fiancee. Rock Hudson and Donna Reed make an attractive pair, but neither can eclipse the glorious Sedona, Arizona locations. Though extras are slim on this limited edition Twilight Time release, a solid 3D transfer and good audio bolster the appeal of this little-known damsel-in-distress tale, which, despite some flair, is best left for fans of 3D and westerns only.