Wonders of the Universe

I'm a History Channel junkie, so I've probably seen just about every universe-related piece of programming they have. Some of them are informative, others simply dumb down basic astronomy for us lay persons. So, when the BBC-produced 'Wonders of the Universe' arrived in my mailbox I wasn't expecting much. Another series documenting the vastness of space. While, 'Wonders of the Universe' may make you feel insignificant, it doesn't dumb down its scientific explanations. Host physicist Brian Cox dives straight into some mind-bending and awe-inspiring theories of physics, all the while traveling the globe to give us hands-on ideas of what he's talking about.

I'm no scientist. I hate chemistry, but somehow Cox is able to make those things not only palatable to me, but interesting. The way he explains a principle like entropy is easy to understand, yet complex enough to boggle the mind. This is a deeply scientific show. Bold enough to dispense complicated scientific theories in order to explain the existence of the universe.

There are times that you feel like you've accidentally stumbled into a physics class at your college. Some of the information Cox talks about is truly unnerving. I say unnerving, because it makes you realize how fragile we humans are compared to the grand universal scheme of things. How the universe could wipe us out without a second thought.

There are four informative, hour-long episodes included in this set. During the first episode, "Destiny," Cox tries to explain time on a grand cosmic scale. You'll notice themes such as time and the life of stars are constant subjects throughout the four episodes. We learn about the 2nd Law of Thermodynamics along with Heat Death, which will at some point cause the universe to cease to exist. He explains the law of entropy (matter traveling from an ordered to disordered state through time) and travels to an abandoned diamond mine to show us entropy happening right before our very eyes. The Arrow of Time is also a subject during this episode as Cox tries to explain how time is unceasing.

In the second episode called "Stardust" Cox discusses the lives and deaths of stars. We learn how all matter was and is created in stars. Every molecule on earth, at one time, was part of a distant dying star. CG rendered animations show us what it might be like to be next to a dying star. These CG animations are some of the best I've seen for a documentary about the outer reaches of space. That's because they look and feel real. Even though some of the images repeat throughout the series, it doesn't make them any less fun to look at.

The third episode, "Falling" focuses mainly on the gravity and its effects, not only on earth, but in the rest of the universe. This is something that's never talked about in sci-fi shows when humans travel to different planets. It's very likely that those planets would have a much higher gravitational pull. Cox jumps takes a ride on the Vomit Comet, and also jumps into a centrifuge to show us what it would be like to walk on Mars, Jupiter, and other distant planets. He discusses the immense power and gravitational pull of black holes, which is some of the most interesting information in the entire series.

Finally, the fourth episode is called "Messengers." We learn about light, the speed of it, and how it's used to actually measure distance and time. We learn how light is a messenger of sorts, relaying information from the depths of space.

Throughout the process you really feel like you've learned stuff you never knew. It's enlightening, baffling, and inspiring all at the same time. Yes, it does get old seeing lone pictures of Cox wandering through unoccupied land or staring up into the sky, but he does do a good job drawing you in with complex theories and laws that you wouldn't have wanted to learn about otherwise. 'Wonders of the Universe' walks a tight rope in explaining weighty educational material but making it understandable for non-physicists. In that it succeeds. You never feel talked down to. You feel you've genuinely learned something of value. You still feel insignificant, but at least you're a little wiser about the universe.

All four episodes come pressed onto one 50-GB Blu-ray Disc from BBC. The disc is housed in a standard keepcase. Altogether the runtime is around 230 minutes. 'Wonders of the Universe' has a fairly annoying menu also. There's a Play All feature, and then a Scene Selection feature. The Scene Selection feature is where you'll find the different episodes listed by name, but you still have to select them and then start them from the first scene. There's nowhere where you can just select an episode and have it start playing. I found it bothersome that I had to go inside the episode's own scenes and select the very first one if I hadn't used the Play All feature.

'Wonders of the Universe' is presented in 1080i with the help of a AVC encode. It's obvious that the series was filmed with HD cameras much like 'Life,' or 'Planet Earth.' The visuals, for the most part, are absolutely stunning. They do seem to have a bit of a post-processed look to them, like contrast has been boosted a bit to make it pop even more.

Colors are very bold. From the icy blues of cracking glaciers to the dark greens and reds from interstellar gases this entire presentation is full of vivid color. Blacks are bottomless, which is necessary to portray the black void of space. Fine detail is optimum, producing visuals that allow you to see individual grains of sand in a single sand castle or the millions of tiny specks of light in the night sky.

Like I mentioned above, the state-of-the-art CG animated scenes are truly a spectacle to behold. They actually reminded me of the realistic outer space visuals used in 'Sunshine.' These animations are never calm. Instead they convey the constant changing nature of the universe. The key is that they look real. They aren't dressed up to look too hokey, they actually look like the genuine thing. Seeing the fine mists of gasses floating around nebulae or shooting through the cosmos passing galaxy after galaxy, these visuals are stunningly well done.

There is one caveat to this otherwise fantastic looking presentation. There is noticeable banding throughout each episode. The banding appears, most frequently, during the common fade ins and fade outs that are used as transitions. Large bands can be spotted as the day turns to night, and then night into day. The bands slowly extend with the image until it fills the screen and they're no longer visible. It's really the only drawback to this presentation and wouldn't be such a big deal if it wasn't so persistent. 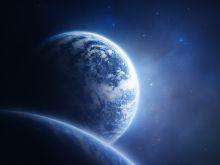 Sadly, the audio is a disappointment. 'Wonders of the Universe' has been saddled with a lossy Dolby Digital 2.0 mix. This is a documentary series that could've done with a full 5.1 surround sound experience. It would've been all the more engaging had the explosions of space and the rousing score been swept back behind us in the rear channels.

Cox's narration is always clear and intelligible, and the score really does add a lot to the mix. There's a surprising amount of bass here that's well rounded and resonant. The 2.0 mix is technically proficient, and is better than most stereo mixes out there, but a true surround sound mix would have complemented this great series all the more.

'Wonders of the Universe' was surprisingly good and was able to cover different material and travel a much different road than other documentaries and shows about space and the universe. Cox does it in such a way that you feel you're learning something new every time he brings up a new subject. He makes tough principles and theories easy to understand without truly watering them down to nothing. It's a mind-boggling series to say the least. You may want to watch one at a time and take breaks in between. My brain was swimming by the end. It's got very strong video, but disappointing audio. Finally, add to that the fact that there are no special features on the disc and it's hard to come down with an overall recommendation. So, I'm going to say that this one is worth a look for sure.

Sale Price 12.99
List Price 24.99
Buy Now
3rd Party 13.98
In Stock.
See what people are saying about this story or others
See Comments in Forum
Previous Next
Pre-Orders
Tomorrow's latest releases