Lightning McQueen sets out to prove to a new generation of racers that he's still the best race car in the world.

After the terribly misguided decision of modifying the sequel to 2006's animated racing sports comedy with a sleeker, more stylish espionage body, the mechanics at Pixar wisely rebuilt the CG vehicle to its original classic parts for Cars 3. And as a result, this franchise's third installment is a winner, managing a decisive but astonishing victory over its predecessor. Returning to the drawing board, the plot is simplified with a better aerodynamic focus on a clearly-defined finish line, a concept redesign that brings the series back to the basics. This doesn't necessarily mean the first movie is suddenly a welcomed addition to the studio brand or that the direct follow-up is somehow magically more tolerable and in someway good. It only means this latest entry is an unexpected improvement over its predecessor, so much so that I'm willing to even suggest it's better than the first movie from eleven years. It should be obvious I'm not a fan of the series, let alone the sport the producers choose for its subject matter, but I was pleasantly surprised and thoroughly enjoyed it.

Almost as though borrowing parts from other sports films, the story of Lightning McQueen (Owen Wilson) being threatened by a younger generation of racing cars and having to face retirement is engaging and on the same maturity standing as other Pixar greats. As if pretending the sequel never happened, Cars 3 feels as though picking up some after the first where the once-pompous McQueen no longer races purely for the win, but for the love of the sport. A short montage opening even shows the camaraderie and fraternalism between athletes with McQueen even encouraging much of it while still being recognized as the world champion everyone wants to beat. An amusing running gag shows Dinoco owner Tex (Humpy Wheeler) tempting the star champ right in front of his own racer Cal Weathers (Kyle Petty). Things suddenly change for the friends when a host of rookie racers, like smug condescending Jackson Storm (Armie Hammer), enter the competition. With his sleek, streamlined body that practically hugs the road, his glossy midnight black paint job and a cool lighting effect, Storm easily defeats the veterans without much of a challenge. 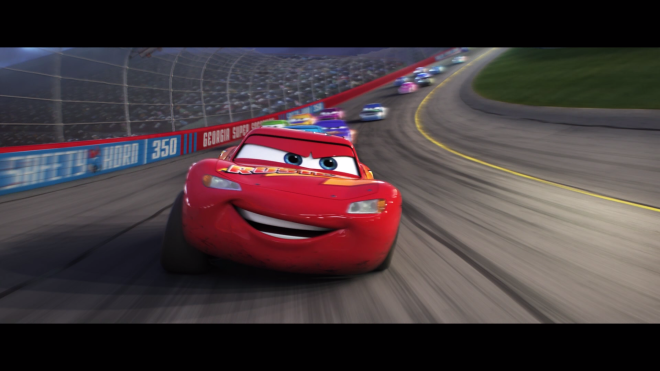 For fans of the sports genre, there is something vaguely familiar about this plot. As analyst Natalie Certain (Kerry Washington) points out, Jackson Storm was perfectly designed as if in a lab, training with the latest equipment and technology to further enhance his attributes. He's an unbeatable machine! Where have we heard such language before? That's right! Storm is basically Ivan Drago, the cocky and brutal nemesis of Rocky IV. And just like our favorite boxing hero, McQueen must return to his roots, heed the words of his friends and late trainer, Doc Hudson (Paul Newman), and learn to fight smarter, not faster. And although we have the obligatory training montage where McQueen tries to outrace racing technician Cruz Ramirez (Cristela Alonzo), all that's missing is a beach scene with congratulatory hugs. But with that negligible complaint aside, the film zooms right along while introducing new trainer Smokey (Chris Cooper), the crew chief that made Doc into a racing legend. The story also suddenly goes left while turning right by shifting its influences from classic Rocky to something more like Creed, but that's as far as I'll drive into spoiler territory.

With such pleasant surprises thrown at the audience, Cars 3 manages to be a delight while still being somewhat predictable, which is an oxymoron. I know. Nevertheless, part of its value is the film's silliness and humor feeling reminiscent of Talladega Nights: The Ballad of Ricky Bobby, except McQueen has already overcome his arrogance. Here, he's faced with the reality of growing old, of age itself making it difficult to keep up with the arrival of younger, faster racers, a common trope of many sports films. Pixar hasn't really explored the theme from this particular perspective, though Up and The Incredibles come pretty close from a different angle. In Cars 3, however, the filmmakers embrace the theme wholeheartedly and sincerely, pitting McQueen against the prospect of retirement after a near-fatal crash and at the behest of his new sponsor Sterling (Nathan Fillion), who wants to profit from McQueen's popularity as a brand name. The race to the finish line comes with emotional epiphanies and encouraging words for both younger viewers and the older folks wishing to embolden those young racers to always chase their dreams.

Walt Disney Studios Home Entertainment brings Cars 3 to Blu-ray as a two-disc combo pack with a code for a Digital Copy. The Region Free, BD50 disc sits comfortably on the panel opposite a DVD-9 copy with a lightly embossed, glossy slipcover. At startup, the disc commences with skippable trailers before switching to a menu screen with the standard options, music and full-motion clips.

The second sequel races to the finish line with a spectacular, reference-quality 1080p/AVC MPEG-4 encode, igniting the screen with a sumptuous palette that keeps the screen lively and upbeat. The vast collection of cars is a vibrant array of opulent primaries, from the cherry red of Lightning McQueen and the electrifying blue of Jackson Storm to the lush, energetic green of Chick Hicks and other racecars. Better yet, the frame is continuously awash with an enthusiastic and spirited collection of secondary pastel hues, making every minute of the film a feast for the eyes. A stunning, pitch-perfect contrast adds a crisp, glowing punch to every race, as the cars, especially when McQueen receives a new shiny coat, glisten in the sun and the lights in the stadium glitter while maintaining superb clarity. Rich, penetrating blacks provide a cinematic quality and a three-dimensional feel while tiny shadow details remain visible from beginning to end.

Presented in a 2.39:1 aspect ratio, the CG-animated film is arguably the sharpest of the three movies, exposing the most minute and meticulous feature on the faces and bodies of each vehicle. Viewers can make out the tiniest scratch and blemish of Miss Fritter and her demolition derby friends while the reddish-brown rust stains of Mater are so shockingly lifelike and realistic that one is almost tempted to touch it. The edges of the new, slick racecars are very well-defined while the stickers and lettering of the cars, windows and billboards are legible even from a distance. The razor-sharp lines in the buildings, the aged wood racetrack and the new, fancy equipment at Rust-eze's training facility will mesmerize and delight viewers.

While most will come for the pretty cars, others will enjoy the thrills and excitement of hearing those same cars screech, whirr, growl and vroom across the screen thanks to an excellent DTS-HD Master Audio 7.1 soundtrack. Whenever the cars take to the track — be it dirt, mud, sand or asphalt — each vehicle fluidly and effortlessly pans from one speaker to the next while the echo of engines bleed into the sides and rears. Also showing excellent directionality during calmer moments, the cheer of the crowd spreads into each speaker, the voices of the announcers reverberate throughout the room and the leaves rustling in trees can be heard in the distance.

For a majority of the runtime, however, much of the action unfolds across the screen, generating a highly engaging, sprawling soundstage. Imaging continuously feels expansive and spacious with convincing off-screen effects and atmospherics the discretely move across all three channels. Randy Newman's score also feels well balanced with superb fidelity and warmth, exhibiting outstanding clarity and distinction in the highest frequencies. The dialogue is precise and intelligible in the center, delivering every line and emotional conversation with excellent intonation. The low-end, on the other hand, is not particular impressive nor standout, but it's appropriate to the few bits of action with accurate, room-penetrating response and a couple appreciable moments that dig just below the mid-bass.

The following are only available on the Blu-ray disc and shared with the DVD home release.

Audio Commentary: Director Brian Fee is joined creative director Jay Ward and producers Kevin Reher and Andrea Warren for an enlightening discussion on the production's technical aspects, each of their involvement in the franchise, the characters, and the plot's themes.

After the disappointing misguided decision to modify the series for the sequel, the mechanics at Pixar wisely rebuilt the CG animated sports comedy to its original classic parts for Cars 3. As a result, the franchise's third installment manages a decisive but also astonishing victory over its predecessor, racing to the finish line with emotional epiphanies and encouraging words for audiences of all ages. The Blu-ray crashes to a screeching halt with a gorgeous, reference-quality picture quality and a fantastic DTS-HD audio presentation. Packing a wealth of supplements in the trunk, the overall package is a winner for fans of the franchise and makes for a strong rental for the curious.

Sale Price 10.5
List Price 26.5
Buy Now
3rd Party 6.99
In Stock.
See what people are saying about this story or others
See Comments in Forum
Previous Next
Pre-Orders
Tomorrow's latest releases