He Walked by Night

Based upon true events, this film noir classic is a "thrilling, absorbing story, superbly told, well-acted [and] brilliantly photographed" (The Hollywood Reporter). Starring Richard Basehart, Scott Brady and Jack Webb, this tense, exciting: (Variety) thriller was the inspiration not only for the TV series "Dragnet," but for many other subsequent "ripped from the headlines" crime dramas.

Taken from actual case files, He Walked By Night is the suspenseful, action-packed tale of a manhunt for the most cunning criminal in the history of the LAPD. With a combination of ingenuity, state of the art technology, sweat and sheer determination, the police painstakingly track down a brilliant, elusive thief and cop killer who seems to have the ability to vanish into thin air. But can they catch him before he murders again?

Almost every American has heard of Dragnet, the classic L.A.-based TV cop show that debuted in the 1950s and ran on-and-off for decades, but probably just a precious few recall He Walked by Night, the low-budget movie that inspired the hard-boiled series. And that’s too bad, because director Alfred Werker’s taut, no-nonsense film noir is a lot more artistic, affecting, atmospheric, and memorable than any of Dragnet’s formulaic episodes. By combining terse storytelling with a couple of dazzling set pieces and a host of fine performances, He Walked by Night holds our attention from start to finish as it methodically chronicles how the LAPD hunts down an elusive and diabolically clever lone-wolf killer.

That killer is Roy Morgan (Richard Basehart), a quiet, unassuming, well-dressed man who matter-of-factly shoots an off-duty police officer at point-blank range after he’s spotted trying to break into an electronics store. The murder sparks an intense LAPD investigation led by Captain Breen (Roy Roberts), who assigns two detectives, Sgt. Marty Brennan (Scott Brady) and Sgt. Chuck Jones (James Caldwell), to work the case. As they tirelessly track down leads, the reclusive Roy hides out in his secluded Hollywood bungalow with his trusty watchdog and continues to commit a string of robberies to throw the cops off his scent. A couple of close encounters with the police ensue, but Roy, who hasn’t been the same since he returned from service in World War II, always escapes the scuffles, often disappearing into the labyrinthian network of underground storm drains that snake beneath the streets of L.A. Like a nocturnal animal, Roy only leaves his nest after the sun goes down, making it harder for Breen and his crew to nab him.

Along with Call Northside 777, The Naked City, and T-Men, He Walked by Night ushered in a new era of noir by examining the rough realities of urban streets and the ruthless thugs who prowl them. Yet instead of focusing on the suspect’s criminal deeds and off-kilter personality, this police procedural presents the narrative from the law’s perspective, allowing us to get an insider’s view of the investigation. Like a job shadower, we tag along with the detectives as they pound the pavement looking for clues, confer with a forensics expert on shell casings, and process the input of various witnesses to create a composite sketch. No superfluous romance or subplots clutter the canvas; He Walked by Night is all business all the time over the course of its brisk 79 minutes.

Heightening the film’s semi-documentary aura is the narrative’s true-life roots. Right up front, a prologue states the story is based on the “most difficult homicide case” the LAPD has ever had to tackle (before Charles Manson, of course). Though Roy Morgan is not portrayed as a serial killer, he still closely resembles Erwin “Machine Gun” Walker, whose murderous rampage a couple of years before put him on death row and was most likely attributable to some kind of post-traumatic stress brought on by his combat tenure in World War II. Because PTSD was a hush-hush topic - and not even identified as a common affliction - in those days, the John C. Higgins-Crane Wilbur screenplay only vaguely alludes to Roy’s war record, planting a seed that never gets the chance to germinate. Yet the mere hint that the war could be complicit in Roy’s crimes - quite an innuendo for 1948 - adds an extra layer of intrigue to the movie. (Learning so little about Roy personally and never discovering what compels him to repeatedly commit crimes are perhaps the film’s biggest faults.)

Of course, most film noirs worth their salt are distinguished by stunning cinematography, and He Walked by Night is no exception. The great John Alton constructs a number of striking shots and sequences, the most notable of which is the thrilling climax that largely transpires in the underground sewers of Los Angeles. Beautifully employing low-level light against the cold concrete tunnels, shimmering streams, and murky puddles, Alton immerses us in a dank, creepy netherworld teeming with cinematic possibilities. Alton worked with director Anthony Mann on T-Men the previous year, and though no solid proof exists, there’s a general consensus among classic film experts that Mann directed the famous sewer scene, as well as other isolated sequences in He Walked by Night. No one seems to know why Mann was asked to participate and why or if Werker was removed from the picture, but many sources list Mann as an uncredited director on the film. The arresting visuals and artistic construction of the climax (which interestingly predates a similar and far more renowned sewer scene in Carol Reed’s The Third Man) suit Mann far more than the workmanlike Werker, making the connection seem very plausible indeed.

Basehart, in only his third motion picture, brings the cold and aloof Roy to brilliant life. With restraint and a quiet resolve, he showcases the enigmatic, duplicitous qualities that make this mysterious sociopath such a fascinating figure. Brady also makes a strong impression in only his fourth film, balancing the stereotypical square-jawed toughness of a movie cop with just enough affable charm to humanize his character. Plenty of unheralded supporting actors populate the proceedings as well, and Jack Webb, who identified the lasting appeal of He Walked by Night and parlayed it into a starring role in Dragnet a few years later, asserts himself well as a forensics expert.

He Walked by Night is another underground noir that’s been unearthed, restored, and elevated to its proper place in film history. When viewed in tandem with the recently released T-Men, this beautifully shot and constructed movie reminds us great independent films aren’t just a recent phenomenon. We just have to work harder to rescue and preserve these Golden Age gems so they can be fully appreciated by current and future generations. He Walked by Night always will be classified as a B movie, but it gets a strong A for artistry, and for this police procedural, that’s a significant badge of honor. 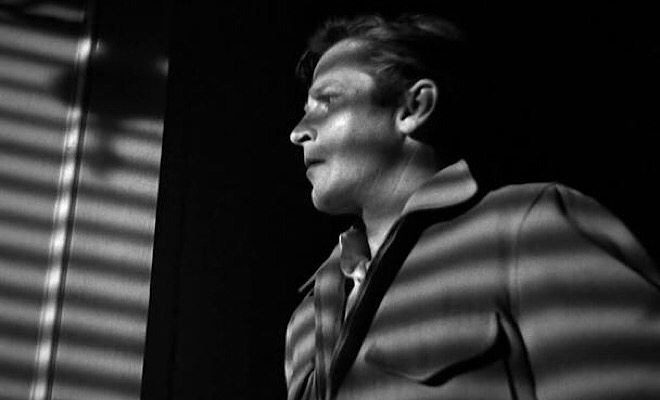 He Walked by Night arrives on Blu-ray packaged in a standard case. A beautifully designed 24-page booklet featuring an essay by Max Alvarez, several black-and-white scene stills, and a couple of full-color poster reproductions is tucked inside the front cover. Video codec is 1080p/AVC MPEG-4 and audio is uncompressed mono. Once the disc is inserted into the player, the static menu without music immediately pops up; no previews or promos precede it.

Classicflix gives noir fans another gift with this beautifully restored 1080p/AVC MPEG-4 transfer that showcases John Alton’s exceptional cinematography. Though clarity and contrast levels vary at times, the overall image quality remains quite high. Grain is evident, but it lends the picture a lovely film-like feel and supplies necessary texture to this gritty tale. Blacks are rich and deep, the whites of flashlights and naked bulbs are crisp, while well-defined shadow lines, especially on Venetian blinds, heighten the impact of many complex shots. Excellent grayscale variance complements fine details and sharp close-ups highlight such subtleties as sweat droplets on Basehart’s face. Best of all, the source material is remarkably clean, crush is largely absent, and any digital doctoring escapes notice. Film noir aficionados will love this top-notch rendering that brings this movie to life like never before.

Classicflix once again produces a strong uncompressed mono track that strikingly maximizes all the nuances and bold accents that distinguish the audio of He Walked by Night. Because music is used so sparingly, the film relies on natural audio elements to convey mood and build suspense, and this track complies with clear, well-modulated sound that enhances the action without overwhelming it. Gunshots burst forth with a startling intensity that reverberates throughout the room, while screaming sirens, rumbling motorcycle engines, and the dissonant barking of a watchdog add immeasurably to the atmosphere. When the score does kick in, a wide dynamic scale handles all of its highs and lows without any distortion, and during all the long stretches of silence no hiss, crackles, pops, or surface noise disrupt the delicious quiet. Best of all, every bit of dialogue and narration is easy to comprehend. Seventy-year-old audio tracks usually exhibit some imperfections, but this one is remarkably clean and vibrant, which heightens the impact of this classic film noir.

Just a couple of supplements are included on the disc, but they are all of impeccable quality.

Audio Commentary - Film noir expert Alan K. Rode and the always delightful Julie Kirgo (whose mellifluous voice usually graces Twilight Time releases) team up for this enthusiastic and insightful commentary that examines He Walked by Night from many different angles. Kirgo calls the film “one of the most effective portraits of Los Angeles of the period,” while Rode provides facts about the real-life killer who inspired the film and plenty of background information on almost every member of the cast and crew. Both analyze the characters and themes, point out locations, sprinkle in bits of interesting trivia, and share their unbridled enthusiasm for the work of cinematographer John Alton. They also point a shot that was also included in the previous year’s T-Men, explain connections to Dragnet and L.A. Confidential, and praise the movie’s realistic tone. In addition, the easygoing rapport between Rode and Kirgo boosts the appeal of this breezy track, which any classics or noir fan will both enjoy and appreciate.

Featurette: “Below the Surface: He Walked by Night” (HD, 12 minutes) - Rode, Kirgo, and a few other respected industry professionals pay tribute to this notable film noir in this slick, well-produced piece. The movie’s storm-drain climax, which Rode reminds us was shot prior to the sewer sequence in The Third Man, is saluted and dissected, along with Basehart’s “minimalist” performance and the connection between He Walked by Night and Italian neorealism. We also learn about the uncredited contributions of director Anthony Mann and the background of Erwin “Machine Gun” Walker, upon whose troubled life the film was partially based. This is another worthwhile featurette from the Classicflix team, and I hope the studio continues to include similar pieces on future Blu-ray releases.

He Walked by Night may have inspired Dragnet, but Alfred Werker’s tightly woven film noir stands on its own as a well-acted, involving, and artistic production. While the just-the-facts-ma’am chronicle of a police probe into a cop killing paints an authentic portrait of an investigation, stunning imagery and excellent performances elevate the material. Classicflix scores again with another superior Blu-ray presentation, featuring beautifully restored video and audio transfers and a few worthwhile supplements. Terrific film noir Blu-rays just keep on coming down the pike, and this is another worthy addition to any serious movie fan’s ever-growing collection. Highly Recommended.