Derek Cho (Steven Yeun, “The Walking Dead”) is having a really bad day. After being unjustly fired from his job, he discovers that the law firm’s building is under quarantine for a mysterious and dangerous virus. Chaos erupts throughout the office as the victims of the disease begin acting out their wildest impulses. Joining forces with a former client (Samara Weaving, “Ash vs Evil Dead”) who has a grudge of her own, Derek savagely fights tooth and nail to get to the executives on the top floor and settle the score once and for all.

Setting aside some minor similarities to last year's The Belko Experiment, Joe Lynch takes a crack at corporate America in Mayhem, a fairly standard genre piece that ultimately collapses beneath the weight of its own self-awareness. The story of an office building under quarantine instantly becomes predictable within a few minutes of seeing Steven Yeun (of The Walking Dead fame) mistreated by his superiors. Yeun provides a voice-over in the opening shots of a violently-chaotic business meeting, explaining the virus removes social inhibitions and makes victims give in to their socially-repressed desires. And apparently, this can be anything from sexual perversions and violent tendencies to simply being tyrannical bullies, as in your mean boss is now an even worse, horrible boss. And for the most part, Lynch and his team bask in the concept of seeing stiff, uptight suits turn absolutely bonkers and into bloodthirsty savages, though ironically, much of the brutal gore and so-called sadistic frenzy is incredibly restrained and implied off-screen.

Quickly undermining the fun, however, the narration also establishes an easy out from its own premise: the crimes committed by the infected are not punishable in federal court — something having to do with a person not in the right state of mind or some such nonsense. Sure, this convenient pretext makes it easier to justify our hero's horrible actions. But Yeun's whipping-boy Derek being set up as the scapegoat to the legally questionable activities of the higher-ups (Caroline Chikezie and Steven Brand) is plenty to win sympathies and enjoy his murderous rampage to the top executive floor. The escape from any wrongdoing, frankly, feels like a dodge, as though the filmmakers want to revel in the idea but not fully embrace or commit to it, which ultimately weakens the fun and robs the audience of any surprises. What's the point of seeing a wish-fulfillment play out without repercussions or a feeling of achievement, especially when the main protagonist is made out to be the every-man frustratingly denied the American dream by the elite? 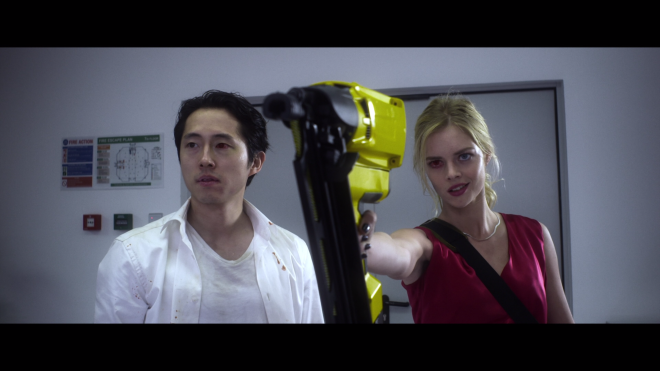 Then again, Yeun's Derek has always strived to be part of the elite. Or, at least, that's what we are told during the opening elevator montage where his change in office attire not only symbolizes his rise in economic stature but also his metamorphoses from kindly schlump to cold, heartless prick. We are given a taste of his malicious, despicable ways when denying Melanie Cross (Samara Weaving of Netflix's far-better comedy-horror The Babysitter) an extension on paying her mortgage. Basically, this is a tale of both retribution and personal redemption when the two join forces in a bloody combat for the elevator key pass. As the average Jane, Melanie has more of a stake in this battle, seizing on the opportunity to retaliate against the one percenters. She's also a more likable character not only because she's a metalhead with a nail gun but also because as far as we can gather, she's always been a hot-tempered badass. The rage disease has only increased her level of angst towards the capitalist system into an unstoppable wrath.

Cynical as my take on the movie may be, I admit Lynch's Mayhem is a playful frolicking romp that plays decently well to our collective fantasy of seeing the rich presented with their much-earned comeuppance. However, Lynch and his team are much too aware of the plot's deeper implications – if we can even call it that – eventually wearing what should have been subtle undertones like a demerit badge of honor, leaving little to the imagination. The young Ms. Cross is the down-on-her-luck working-class hero already prepared and primed for battle against the upper-class snobs robbing her of everything. Meanwhile, Derek personifies the risks of corporate ambitions, one that risks morality in favor of personal wealth, and his climb up each floor blatantly reflects that desire gone obsessively wrong. But as can already be guessed from his time with Cross, his fight to the top is ultimately his salvation but, again, without consequences. Something about the ending isn't so much unwarranted and unsatisfying, as it is predictable and inevitable.

Image Entertainment and RLJE Films bring Mayhem to Blu-ray on a Region A locked, BD25 disc inside a blue, eco-elite case with a lightly-embossed slipcover. After several skippable trailers, the disc switches to a generic menu screen with full-motion clips and music playing in the background.

Corporate chaos infects Blu-ray with a good-looking 1080p/AVC MPEG-4 encode, but the raging illness comes with a few physical afflictions making the frenzy more of a tantrum.

The freshly-minted transfer comes with that sterilized digital appearance that lacks texture and makes the picture look like a made-for-television special. Nevertheless, contrast is fairly balanced with clean, crisp whites throughout, but it's also rather bland and flat, for the most part, with several scenes running hotter than normal, creating some distracting blooming in the highlights that wash away the finest details or revealing mild noise in the background. Overall definition and resolution are excellent, exposing individual the smallest stitch or negligible face blemish and the tiny objects in the background decorating the offices. However, there are also many softer, poorly resolved moments as well, some of which are related those aforementioned mildly noisy scenes, and there are instances of aliasing along the sharpest edges. Blacks are true and accurate, providing the 2.35:1 image with some appreciable depth and strong shadow details. Colors are not particularly noteworthy, but primaries are cleanly-rendered with the crimson-red blood standing out while secondary hues are decently varied, making flesh tones appear warm and natural.

The Blu-ray features the same infectious 5.1 DTS-HD Master Audio soundtrack heard on the 4K Ultra HD release. Although the surrounds fail to maintain a consistent frenzy, the rampage is quite lively during the more berserk moments, littering the soundstage with lots of amusingly engaging background activity, a detailed mid-range, and adequate bass. For an in-depth take on the audio quality, please click HERE.

Audio Commentary: Director Joe Lynch is joined by director of photography Steve Gainer and editor Josh Ethier for a technical discussion on the production and some of the creative decisions with a few thoughts on the themes and performances.

The Collected Works of Derek Cho (HD, 2 min): Slideshow piece displaying some of the artwork created by the character and featured in the movie.

Serving as a metaphor for the dangers of corporate ambitions, Mayhem is the story of a young, morally-bankrupt man, played The Walking Dead star Steven Yeun, with misguided aspirations of climbing the hierarchy ladder of wealth and social status. That desire is represented as an infectious disease that lessens or ruins one's moral inhibitions, and the movie strives to be a balls-to-the-wall, over-the-top carnage of suits going berserk on one another. However, much of that gore and violence feels restrained with an all-too-easy out at the end, making the promised mayhem ultimately tame and predictable. The Blu-ray infects home theaters with a good-looking HD video that suffers quite a bit from several physical afflictions. The same DTS-HD MA soundtrack shared on the Ultra HD, however, proves more satisfying, but supplements are disappointingly lacking. Overall, the package is worth a look for fans and the curious.

Sale Price 8.85
List Price 29.97
Buy Now
3rd Party 3.67
In Stock.
See what people are saying about this story or others
See Comments in Forum
Previous Next
Pre-Orders
Tomorrow's latest releases