Overview - Chaos ensues when a man tries to expose a dark secret regarding a recently deceased patriarch of a dysfunctional British family.
OVERALL
Recommended

It's a shame that more people don't know about 'Death at a Funeral.' No, not the version starring Martin Lawrence and Chris Rock. Been there, done that. The 2010 remake to this 2007 British comedy doesn't quite capture the atmosphere, the dark humor, the constant dry comments and observations found in the Frank Oz-directed take. It also doesn't quite fill out the cast as well, with numerous characters just not feeling right for their parts, and it most certainly doesn't blaze through the runtime like the original did, with supporting characters getting too much fleshing out at the expense of the whole package. It's hard to improve upon a formula that already works. New Coke, anyone?

Chaos never quite existed in such an unlikely place as it did with the funeral of Daniel (Matthew MacFadyen)'s father. The quiet ceremony at the family home would have gone off without a hitch, if it weren't for, well, everything going wrong that could possibly go wrong. With all the extended family on hand, and all their hanger ons, unforeseen circumstances bring the event to a grinding halt, with sibling squabbles, unrequited and inappropriate advances, accidental drug use, selfish ulterior motives, and a stranger with a dark secret turning the day of mourning into one of unadulterated insanity.

'Death at a Funeral' works, for many reasons. First, the cast is splendid. MacFadyen is solid as the straight man, the new head of the household, the ringleader for the chaos, as the day's stresses and curiosities pile up on his shoulders. Robert (Rupert Graves), Daniel's selfish, successful brother, doesn't quite embody the straight man as much as he does the constant reminder of Daniel's failures in life, and the egocentric nature of the character can be seen in every facet of Graves' performance. The bumbling duo of Howard (Andy Nyman) and Justin (Ewen Bremner) provide brevity to the affair with their selfish behavior throughout the day, as one dimensional characters that are believable and realistic due to their depictions. Alan Tudyk steals the show at every turn, though, as Simon, Martha (Daisy Donovan)'s beau accidentally ingests acid instead of valium. His exaggerated movements don't annoy, and in backgrounds, he's constantly the focal point, with his peculiar portrayal of a trip.

And then, there's Peter Dinklage, the man so irreplaceable to this film that even the remake had to feature him in the same role. Such a lowly character never felt so sympathetic, as the heartbreak in his eyes and lips comes through, despite his dubious intentions at the funeral, and it's all due to the actor's elegance and talent. The true star of this show, Dinklage powers through every scene, and you truly believe him in the part, no matter what else you've seen him in before.

The film's runtime flies by, due to the expert crafting behind the camera. Scenes are well constructed, and edited together seamlessly, branching all of the complex stories and relationships together, pitting actors against countless others, rather than just the same people with each other, and there doesn't seem to be any misplaced moment, any gag gone awry. The way characters are introduced, you get a feel for everyone, and their relationship to the deceased and their peers, with no need to try to jot down notes to keep track of how each person knows who and why. Better still, the varying tones in the film, the frustrations, the agony, the comedy, they blend beautifully to create a real experience, something memorable and intriguing.

Sure, there are some things that could be changed for the better, and a bit of redundancy, as we really don't need Victor (Peter Egan), Martha's unapproving father, or even Troy (Kris Marshall), the would-be pharmacist, to make the story work. The film really could manage by combining Victor with the grieving wife and mother, to add depth to her character, on her worst day, to make her more real, rather than just a constantly tearing-up side presence. One doesn't even need Troy, as he only really ever interacts with Martha and Simon, so just have someone else accidentally give Simon the wrong medicine. That right there would cut down on what little fat there is in the film, and would add those additional layers and bits of discomfort that make the film work so well already.

From open to close, 'Death at a Funeral' keeps you on your toes, with a mix of crude and intelligent humor, a plethora of diverse characters, and some wickedly inappropriate moments, all meshing together to create a film that's accessible on either side of the pond, to adults and teens alike, with great balance and poise. While the remake did help get the word of this under-appreciated darling of a gem out there, it was really a doomed voyage from the start.

'Death at a Funeral' is one of MGM's new titles that act like an old Warner Bros. release, starting the film without a menu prompt, out of the blue, leaving you with no menu screen to work with, to take a time out to. It is housed on a Region A marked BD50 disc with no packaging frills, just an eco-case. This film was previously released in Germany on both HD DVD and Blu-ray (both of which are Region A/B/C), before the United States even got a DVD release. Why it wasn't made a day and date release then, when inferior one dimensional films like 'Home of the Brave from the same studio got said treatment, I'll never know. 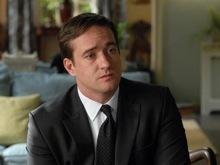 The 1080p encode for 'Death at a Funeral' seems true to its source, with some faults that just seem to be the way the film always has been.

The light, random crush is a bit annoying, and the fluctuating black levels are odd, but what is most noticeable is the somewhat sapped colors throughout the film, as let's just say it isn't as green as the characters on acid say it is. The picture is also far from deep. All that said, there are plenty of times when 'Death at a Funeral' could have been an issue, but wasn't. There's no aliasing in the "follow the casket" map opening, not even in pans, and grain levels throughout the film are natural and unimpeded. Edges are perfect, skin tones are natural, and there's only one or two tiny specks or imperfections in the picture. Detail levels are strong, and textures are quite fine, though they do randomly stop being so occasionally, turning nice, life-like suit jackets into lifeless drapes of color.

Having seen the film across four editions now (German HD DVD and Blu-rays, the DVD, now this), I've grown quite accustomed to the shortcomings of the film visually, and I can say that what's shown here is, while not gorgeous, is quite good for the picture it's for. 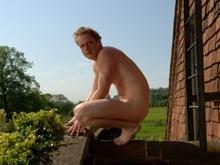 'Death at a Funeral' doesn't win any points with me with its DTS-HD Master Audio 5.1 track. The German import of this release was equally as grating as what is found here, and that's not good, not one bit.

Dialogue, which stays front and center, has random static underneath it, and, at times, a high pitched screech like what is found under the dialogue in 'Sin City.' It's faint, but it's beyond annoying. The "I'm going to jump" line, which I'll assume was ADR, due to the fact that you can't see lips in the shot its in, has a very hollow sound to it, and a bit of an echo, it seems. The film does have some good localization in the front channels, with nice ambiance and effects, just random noises, but they never find their way behind you, despite the fact that in some scenes, they should. In fact, only the Murray Gold score hits the rears. For such a new film (four years old now), 'Death at a Funeral' sure does sound old.

It has to be noted that while the packaging and "menu" for this film only list English SDH and Spanish subtitle tracks, there are additional French and Spanish (possibly Castilian) subtitle tracks available through the subtitle button on your remote. 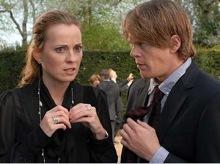 While the extras on this release carry over everything from the domestic DVD (sans any variant trailers), it doesn't quite give us everything from the German Blu-ray (though it makes up for it with different content, instead). Missing here are five interviews with cast and crew, the B-Roll (which is a behind the scenes feature), and the photo gallery. 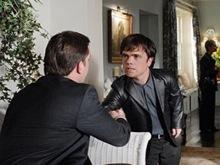 'Death at a Funeral' (2007) is a brilliant, thoroughly enjoyable film, full of wry comments, dry humor, and even some cheap gags, mixing the various types of humor into one cohesive unit. The film roars through its runtime in a flash, and never, ever looks back. This Blu-ray release of the film, which is a few years delayed, has good video, but still the same troubled audio that made the German import a mess. This film has to be seen, though, especially for people who have only seen the 2010 remake. This is how you make a timeless film. This is a recommended title because of the strength of the film alone!