Eastbound & Down: The Complete Second Season

Check out our review for the first season of 'Eastbound & Down!' 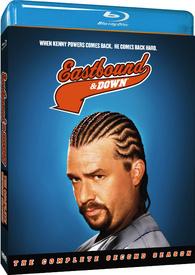 'Eastbound & Down' could have ended after one season. The Kenny Powers character had a full arc, and the final moments of the show gave closure, of sorts, with disappointment and shame, a fitting karmic backlash, replacing hope and redemption. The show could have called it quits, just as Powers could have given up on his dream and faded off into obscurity, which would be his own personal hell (or he could have overdosed, since he is a ticking time bomb). Instead, HBO gave 'Eastbound & Down' a second season, this time with seven episodes instead of six.

This second coming of Kenny Powers may not be as relevant or poignant as the first; it may also not be as relatable. It most certainly isn't as dark, with the black humor being replaced with a more in your face, mostly ironic set of laughs. There's no embarrassing humor, where audiences are left to squirm in their chairs at how difficult it is to watch a man implode psychologically. There is a significant change of tone this time around, but there is no arguing that this is a worthy successor to the awesome original arc.

When it turns out the offer from the Tampa Bay Rays wasn't meant to be, Powers (Danny McBride) doesn't tell his family. He also doesn't take April, the woman of his dreams. Instead, tail tucked between his legs, the former world class pitcher heads south of the border to sulk in his misery. Spending his time racking up more credit card debt under Steve's name, cock fighting, and binge drinking, Powers may hate his new location, but his new place in life isn't much worse than it was teaching gym to elementary students. A constant heckler of the local Mexican team, the Charros, Powers soon finds himself on the path to redemption yet again when he puts on the yellow and green uniform of the somewhat untalented team. This time around, he isn't making videos of himself to try to get back in the game he loves. His theatrics may upset the team, but Powers is proving where he belongs, and it may not be in Copalex, Mexico.

'Eastbound & Down' continues to be a caustic, self-effacing laugh riot this second time to the well. Since Powers already fell from grace in the opening moments of the first season, this continued plunge only makes the character more likable. His ventures and misadventures are the perfect fit; there's nary a moment where one second guesses his actions and words, as they make sense for his new position in life. In fact, they may make more sense than they did before. Knowingly or not, Powers is on the road to redemption, sorting out his mistakes. His new audiobook is his journal, his chronicle of failures that isn't a load of bullshit like his first. He's truly reaching in deep, and analyzing his failures, becoming a real adult for the first time in his life.

For the majority of the season, most of the cast remains in the States, as only Steve finds his way down south of the border. This means we have a whole new cast of characters, and they're a real laugh riot. Ana de la Reguera plays Vida, Kenny's Mexican love interest, with a mighty, mighty can making the boob man second guess his preferred physical trait in women. Michael Pena is hilarious as the local team's owner, while Marco Rodriguez is a fantastic casting choice as the manager of the Charros, the man who knows exactly what Powers needs to hear, whether he wants to or not. Efren Ramirez ('Napoleon Dynamite') has a small part as Powers' new neighbor, though his continued appearance doesn't give him many real choice scenes, sadly, as his character is quite solid. The real scene stealer is Deep Roy ('Charlie and the Chocolate Factory'), a horribly caustic thug who seems like the perfect sidekick for Powers, if only he wanted to be a sidekick, the lone person in the universe capable of being a bigger dick. Ironic..

Amazingly, this season shows some restraint. The moment I saw the donkey, I feared we'd see something akin to the coup de grace from 'Clerks II,' as it's obvious Kenny Powers would watch (and/or engage in) that sort of thing. It wasn't to be, and we're better for it. Instead of a spiral down the drain circling that final spin, we see a man searching for answers, and finding some of them, whether he likes them or not. It's a coming of age story, really, for a man who's already come of age physically, just never emotionally. The journey of self discovery is touching, but still is loaded with laughs along the way. The humor is a bit sharper, a tiny bit more referential, and never, ever misses a beat. I almost fell to the floor laughing at the 3D rant, or the 'Lost Boys' reference. The language barrier is a real hoot, as well, as now Powers has to be introspective, and living in a place he's sure to hate, the butthole of America as he calls it, the racist prick inside Powers doesn't get his ass killed. He seems to learn the error of his ways, albeit unknowingly, as the season rolls on. Early on, we see him pondering the dark fate of those he left behind in America, his family and friends who he doesn't want to see him fail, and they're so much better off without him in their lives mucking it up, one can't help but love the man for his egocentric ways.

Kenny Powers becomes a full character this time around, and isn't as much the punch line, the red herring. 'The Complete Second Season' is loaded with intelligent, humorous writing, believable scenarios, and character developments that fit fantastically in the canon of the show. There's one liners galore, hilarious set ups, fun characters, and plenty of moments sure to set jaws agape. The show, much like the man, matures this time around. If this show were to hit a third season, I'd welcome it with open arms. 'Eastbound & Down' is still a gripping, impossibly rich show that doesn't falter from its opening arc.

HBO's release of the second season of 'Eastbound & Down' comes to Blu-ray across two BD50 discs, with four episodes on the first, and three on the second. The discs are labelled for Region A only playback. The discs are packaged in a cut-out eco-case, again with a short slipcover that doesn't cover the blue bar atop the case. Menu navigation is standard HBO fare, and, much like other HBO shows, if you marathon this show, the cut between discs will prompt the insertion of disc two, which will continue a season play type feature.

'Eastbound & Down: The Complete Second Season' is an improvement visually from the previous season on Blu-ray, due to the fact that there isn't as much of a discrepancy between episodes, giving a more even look, on top of the very clean, natural, strong looking picture presented in 1080p.

I was really impressed with the solid bold colors, including amazingly vivid reds, on display here. Picture depth is no joke, as the show is regularly very immersive, sucking you into the slums of Mexico. Textures are solid, detail levels strong and mostly consistent, with only a few softer shots mixed in. There is some grit and toughness to the first episode, but it clears up faster than Kenny's fastball. The only real technical issue is the random spike of noise here and there. Artifacting, banding, aliasing, digital tampering, fringing, moire, there's none of that, and contrast levels are strong.

Simply put, this is an amazingly strong picture free from all the bullshit.

With seven lossless DTS-HD Master Audio 5.1 tracks, the second season of 'Eastbound & Down' is again a good sonic experience on Blu-ray, though there are a few rough patches. Rear speakers get plenty of activity when applicable, particularly the opening cock fights, with appropriate directionality and some solid separation. Bass gets borderline thunderous when it pops up, although that isn't all too often. There is a weird crackle in the mariachi soundtrack in the second episode, that doesn't pop up anywhere else. Dynamics can seem a bit off at times, with lines just not feeling appropriate to their scenes. Throw in some volume spikes that can lead to the need to adjust volume levels slightly, and this one is just a little bit behind its predecessor.

'Eastbound & Down' remains an unapologetic, hilarious look at one man's struggle through his mid-life crisis, his dreams dashed, his hopes always just out of reach. This second season is a worthy followup to the original even if it is dramatically different in more ways than its location. HBO's Blu-ray release of the show is solid, and considering it's day and date with the DVD release, and at such a low price, I find it easy to give this one a solid recommendation.

Sale Price 29.96
Buy Now
3rd Party 24.45
In stock on September 30, 2020. Order it now.
See what people are saying about this story or others
See Comments in Forum
Previous Next
Pre-Orders
Tomorrow's latest releases