James Caan and Academy Award® winner Kathy Bates star in the bone-shattering thriller Misery, adapted from the novel by Stephen King. As Paul (Caan) recuperates from his injuries in the secluded cabin of his benefactor Annie (Bates), he begins to discover that beneath the seemingly kind and naive exterior of his self-described “number one fan” lurks a mind that is cunning, unhinged, and bent on keeping her favorite writer as her personal prisoner for the rest of his “cock-a-doodie” life … and Sheldon must engage his savior-turned-captor in a battle of wills that will push them both to the brink.

For most moviegoers, the infamous hobbling scene is the most memorable moment of Rob Reiner's Misery, ranking as one of the most gruesomely shocking moments in cinema. And seeing someone's ankles smashed with a sledgehammer is understandably horrific, especially since it comes out of nowhere and with very little warning. However, for me, what really makes the psychological thriller based on the Stephen King bestseller an unforgettable horror favorite is, and forever will be, Kathy Bates' uncomfortably convincing and Oscar-winning performance as the dangerous psychopath Annie Wilkes. Since watching the film in theaters during the 1990 holiday season, Bates' seemingly harmless and hospitable nurse has haunted me as one of the most disturbingly creepy monsters to obsess the dark hallways and abandoned rooms of my nightmares. This is partly because there is something real and authentic about the Annie character, the sort of fan who is unsound and psychologically damaged but also alarmingly obsessed with the object of her fandom. Even King himself has admitted being inspired by the reactions of a few fans to some of his work.

Thinking about it, perhaps it's not much of a surprise the film's strength is Bates' portrayal of a reclusively sad and disturbed woman with a perverse obsession of romance novelist Paul Sheldon (James Caan). It's hard to imagine another actor pulling it off with the same level of creepiness, one that very slowly and methodically boils from thinly-veiled comments about being Sheldon's number-one fan to brazenly admitting to watching him outside his cabin-room window. And Reiner, who was better known for his comedies throughout the 1980s, takes advantage of Bates' incredibly subtle performance, skillfully giving the audience faint, little glimpses of a dangerous lunatic hiding behind that neighborly smile, an unhinged maniac struggling to be contained. The scene that always seems to catch me by surprise is when she thoughtlessly mentions having to testify before a courtroom but quickly reverts to the conversation at hand with Sheldon, which by that point, we're already speculating she might be keeping him in the room against his will. It's one of those wonderfully creepy moments where we are left wondering if we heard her correctly. 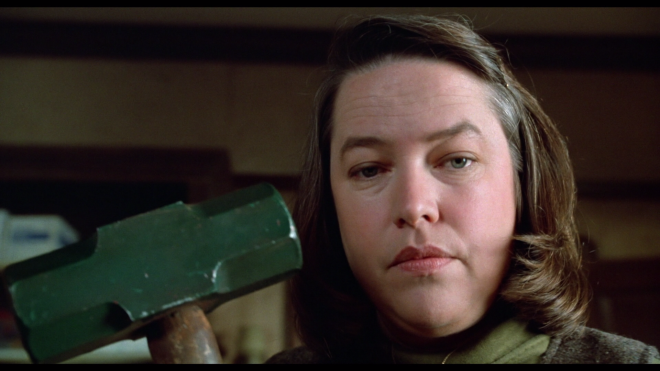 Moreover, this is also the moment Sheldon starts wondering the same thing, as various thoughts race through his head and along with the audience, suspicions of Annie begin to rapidly grow. Reiner's camerawork is also interesting after this point because up until this very quick verbal exchange, their conversations were mostly captured in flat, eye-level shots, weirdly matching Annie's calm and nurturing kindness to the injured Sheldon. However, when she lets slip the comment of being in court, the camera shifts to a low-angle shot. The unexpected change is very subtle and barely noticeable, but it's just enough to see the character slightly differently and plant the seeds of doubt in viewers' minds. And as she gradually reveals more of her true, deranged self, the low-angle shots become more exaggerated, combined with a few canted close-ups of Bates' chillingly eerie and inhuman glare. But, within that same camerawork, there is a wickedly dark sense of humor underlying the horror, a cartoonish silliness to the on-screen terror. We can almost imagine Reiner giggling behind the camera, like the uncle who loves scaring the kids at reunions.

Still, there is something wickedly clever about Reiner's approach to Misery, a mix of scares and dismay that also induces a couple fits of uncomfortable chuckles. As Sheldon's unwarranted prison sentence quickly escalates into a nightmare where the famed author is forced to rewrite his latest novel, Reiner toys with where the viewers' sympathies should lay. We don't ever completely align with Sheldon except as the victim of unfortunate circumstance, and we only chastise Annie because we're repulsed by what she's capable of. But I would argue that to some degree, we're actually meant to relate, if not identify, with Annie, the delusional fanatic who feels personally offended when creators fail to satisfy expectations. Be it in comics, music, television, books or movies, we've all experienced a similar level of disappointment where our passionate love for the material suddenly, if only for a moment, thwarts rational thinking. Basically, Annie is given a rare opportunity to have the offense revised, a deeply twisted but never admitted fantasy because it is socially unacceptable. And as King once explained in an essay, the satisfaction of a good horror movie is giving those fantasies momentary free reign, to feed the hungry alligators so that they may never escape.

Shout! Factory detains Misery to Blu-ray as a Collector's Edition under the distributor's Scream Factory line. The Region A locked, BD50 disc is housed inside the normal blue case with brand new reversible cover art and a cardboard slipcover. At startup, the disc goes to a menu screen with a static photo of the newly-commissioned artwork with the usual options along the bottom while music plays in the background.

The now classic Stephen King adaptation kidnaps Blu-ray for the second time with yet another shockingly good 1080p/AVC MPEG-4 encode that offers a small improvement over its predecessor. It's a small difference, such as finer threading in the clothing, blankets and curtains, but it's enough for hardened fans to notice and appreciate. Much of this difference is thanks to a brand-new 4K remaster reportedly of the original camera negatives, which usually tends to yield nice results and is sure to stir some suspicions of a future Ultra HD release. But for now, the HD transfer comes with incredibly sharp definition and clarity throughout, exposing the smallest imperfection in the woodwork of the Wilkes house and each of Annie's porcelain figurines in the distance. Facial complexions are highly revealing with lifelike textures. However, there are several softer moments here and there, which are likely related to the condition of the elements and the photography since they are the same moments seen on the previous Blu-ray.

Presented in its original 1.85:1 aspect ratio, the video is also locked indoors with spot-on contrast and pitch-perfect whites, making the blankets seem particularly spotless and immaculate, adding another level to Annie's psychological issues. The snow outside is notably impressive as viewers can make out the individual crystals sparkling in the sunlight while also making the screen really pop. Brightness levels offer a small improvement, but it's an improvement nonetheless, displaying slightly richer, deeper blacks with outstanding gradational differences in the various shades and excellent visibility in the darkest shadows of the house. Barry Sonnenfeld's photography has never been particularly colorful, placing more emphasis on natural, slightly drab earth tones with lots of browns and yellows, but the few observable primaries splattered about the house are accurately rendered and quite vibrant with reds and blues standing out the most.

Misery stalks the Blu room swinging an excellent pair of DTS-HD Master Audio soundtracks: a 5.1 surround sound track and a 2.0 stereo alternative. And owners can't go wrong with either option, though I found myself enjoying the former a little better. On the whole, the surrounds are generally silent, which is to be expected in a character-driven thriller. However, there are a couple moments of solid activity traveling from the sides to the fronts with discrete directionality and satisfying panning, such as the sound of a helicopter flying over the Wilkes farm or hearing Annie walking around the second floor. The design's real strength is in the front soundstage where atmospherics employ all three channels and convincing off-screen action, generating a very broad and welcoming sense of presence. Dynamic range is fairly extensive with outstanding clarity and definition throughout, but then again, there aren't many loud moments that push into the upper frequencies. Still, Marc Shaiman's score is detailed and precise while vocals are well-prioritized in the center. There also isn't much in terms of low bass, but the few bits of action come with a hearty and appreciably responsive weight that feels accurate and appropriate to the events on screen.

Audio Commentaries: The first track features director and producer Rob Reiner discussing his creative approach to the material and the plot's themes while also reminiscing on memories from the set. The second commentary has screenwriter William Goldman mostly narrating the on-screen action with the occasional comment on the production, adapting specific scenes and sharing his thoughts on the end result.

Rob Reiner (HD, 37 min): A recently recorded and enlightening interview with the filmmaker talking about his career, reminiscing on the production and sharing various anecdotes from the set.

Greg Nicotero (HD, 26 min): The legendary makeup effects artist spends a few minutes on his involvement and what he remembers from doing some of the effects work.

Misery Loves Company (HD, 30 min): Edited together from various cast & crew interviews, this fairly standard EPK-like featurette is on the original book, adapting it for the screen and the production as a whole.

Marc Shaiman's Musical Misery Tour (HD, 15 min): The award-winning composer is given a few minutes to share his thoughts on the film and his creative approach to the material.

Advice for the Stalked (HD, 5 min): More words from experts on surviving a dangerous stalker.

Profile of a Stalker (HD, 6 min): Much of the same but focused on the behavioral patterns of a stalker.

Celebrity Stalkers (HD, 5 min): Attention is now on the behaviors of a particular type of stalker.

Anti-Stalking Laws (HD, 2 min): A brief education and background on what qualifies as stalking.

It's true the infamous hobbling scene has made Rob Reiner's Misery an unforgettable horror movie, ranking as one of the most gruesomely shocking moments in cinema. But what really makes the Stephen King adaptation a memorable and enduring film is Kathy Bates' convincingly creepy, Oscar-winning performance as the dangerous psychopath Annie Wilkes, a disturbed woman with a perverse obsession for James Caan's romance novelist Paul Sheldon. The Blu-ray, from Shout factory, crashes into home theaters with a first-rate, near-reference picture quality and a great lossless audio presentation. With a healthy collection of supplements to boot, the overall package is recommended for all the number-one fans out there.

Sale Price 16.7
List Price 24.99
Buy Now
3rd Party 20
In Stock.
See what people are saying about this story or others
See Comments in Forum
Previous Next
Pre-Orders
Tomorrow's latest releases