War for the Planet of the Apes

Caesar and his apes are forced into a deadly conflict with an army of humans led by a ruthless Colonel. After the apes suffer unimaginable losses, Caesar wrestles with his darker instincts and begins his own mythic quest to avenge his kind. As the journey finally brings them face to face, Caesar and the Colonel are pitted against each other in an epic battle that will determine the fate of both their species and the future of the planet.

After a short text briefly recaps the events of the previous two films, War for the Planet of the Apes opens on a cold, rainy day with human soldiers marching in single file. As the young men walk in slow-motion through the forest in their camouflage uniforms, the audience can read the angry, hateful jargon written on the back of each helmet. The entire scene feels more reminiscent of the past than of an imaginary future, evocative of the similar xenophobic language used by Vietnam soldiers as a way to cope with an unspoken resentment for a vain and unwinnable war. Thoughts race through memories of Apocalypse Now, Platoon, Full Metal Jacket and other such war films. There's little denying the parallel is perhaps the point director Matt Reeves ('Let Me In') was aspiring for, especially when the platoon opens fire on a seemingly peaceful, unsuspecting ape camp. The ensuing battle is a distressing spectacle of haunting imagery as it quickly becomes apparent the apes are grossly outgunned. We're also shown the remorseful face of one gorilla fighting on the side of humans, almost as though regretting his part in the demise of his own kind.

Afterwards, Caesar (another remarkable motion-capture performance by Andy Serkis) makes an appearance and once again, appeals the better half of those humans wanting him dead, which this time comes in the form of a rogue, scarily cold-blooded commander named The Colonel (an excellent Woody Harrelson). Unfortunately, his simple gesture for peace only leads to the deaths of Caesar's wife and son, thus paving way for the plot's central theme while ceaselessly making audiences regret not having a large box of tissues at their side. The amazing visuals and jaw-dropping realism of the CG apes are just as much in abundance as the buckets of tears guaranteed by those with a sympathetic heart. Whereas predecessors touched on ideas of science run amok, the danger of power, racial tensions and for peace in spite of our differences, War is a character-driven drama focused on the longing for meaningful relationships and bonds, sprinkled with little reminders of the way we treat our ape cousins, other animals and our planet in general. This is seen when the mute orphan Nova (Amiah Miller) and Bad Ape (Steve Zahn) joins Caesar's quest. 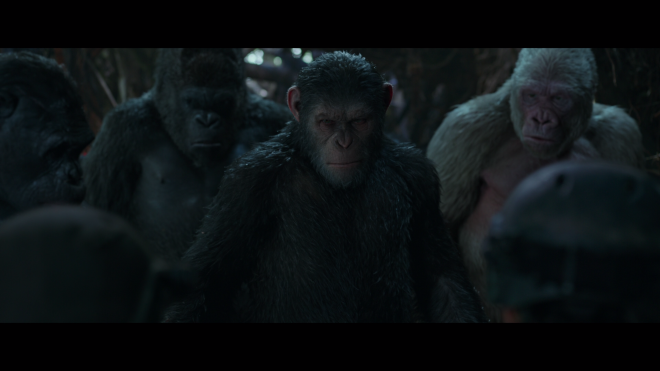 For the third and presumably final installment in the Planet of the Apes reboot series, the script co-written by Reeves with Mark Bomback expands on the notion expressed at the end of Dawn where Caesar acknowledges the similarities of apes and humans. Although the continuously brooding and scowling leader of the ape uprising is haunted by the death of Koba, he also begins to understand the overwhelming narrow-mindedness of the hate that drove Koba. He, too, becomes consumed by his rage to see The Colonel dead for inflicting him with pain and suffering. It's not until Caesar's conversation with this seemingly indifferent human that he finally recognizes how much alike they are when love is in ruins. Anger, pride and vengeance can destroy the rational mind, pushing aside wiser decisions and the ability to foresee consequences. And as portrayed in this second sequel, this seems truer when feeling the extinction of one's species drawing near and the fight to survive the inevitable becomes a priority. However, as Caesar soon learns, the repercussions of giving into these emotions is damaging, making victims of those he's responsible for.

Clocking in at 140 minutes, the bulk of War for the Planet of the Apes has Caesar and his clan living in captivity under The Colonel's dictatorship-like reign. Looking down from his ivory tower, he watches like a godly king while the apes labor to rebuild the wall of an abandoned military weapons installation. The scene of Caesar interrupting the whipping of a weak and emaciated orangutan immediately elevates Caesar to a Christ-like Moses figure that must lead his kind on an exodus to a promised land. In the previous films, morality and the usual good guys vs bad guys dynamics were largely ambiguous, but here, Reeves and company make it very clear humans are the real monsters in this war for the planet. And the real beauty of this third installment is how the filmmakers link the plot back to the original series, despite borrowing a few story ideas from Conquest and Battle. It doesn't hurt the production is aided by the spectacularly stunning computer-generated imagery that brings the apes to a new level of realism. But for fans of the 70s series, War is also an exceptional addition to Caesar's mythology and a superb conclusion to a surprisingly good trilogy.

20th Century Fox Home Entertainment brings War for the Planet of the Apes to Blu-ray as two-disc combo pack with a flyer for a Digital HD Copy. The Region Free, BD50 disc sits comfortably opposite a DVD-9 inside a blue, eco-cutout case with a glossy slipcover. At startup, viewers are taken straight to the standard menu screen with options along the bottom, full-motion clips and music playing in the background.

The apes charge at Blu-ray with an absolutely gorgeous, reference-quality 1080p/AVC MPEG-4 encode that'll leave owners amazed right from the start and fully immersed in this war for the planet. Viewers can basically pick any random scene to use for demo material, as every nook and cranny is plain to see inside the Caesar's waterfall hideout or in the Colonel's weapons-depot base. The tiny scratches and cuts made to the various sticks and branches in the hideout are apparent, and the metal beams and wire fences of the base show their age with scrapes and rust spots everywhere. Facial complexions are highly revealing, exposing every negligible blemish and imperfection in the cast, and every stitch and thread in the uniforms are distinct, also showing their shortcomings and minor flaws. More shocking are the CG apes with their razor-sharp hairs that move independently of each other, the ultra-fine lines and wrinkles in the extraordinarily realistic faces, and each individual pockmark, freckle and minute scar. Each ape adds to the picture's stunning lifelike realism.

Presented in 2.40:1 aspect ratio, the presentation also conquers with spot-on contrast, providing exceptional visibility in the far distance, which is greatly appreciated during the many extreme wide shots. Displaying brilliant, pitch-perfect whites from start to finish, the unblemished snow pops with energy while viewers can make out each individual crystal flake brightly shining in the daylight. The image displays stunning, midnight blacks, as well, from the different shades in the hairs of the apes to the darkest portions of the frame, providing the film with an amazing sense of three-dimensional depth and a beautiful cinematic quality. With dark, penetrating shadows throughout, objects remain plainly visible during the many poorly-lit interiors, and details are never at a loss in the nighttime sequences. Although much of the photography is stylized to appear gloomy and near monochromatic, the palette is nonetheless colorful and vibrant with lively, richly-saturated primaries. Secondary hues are noticeably limited, but the video is awash with a great deal of warmth, making skin tones appear natural, fire radiate with intensity and the afternoon skyline glow with a magenta-fiery splendor.

The apes scream, howl, grunt and loudly chatter into war with a fantastic, near demo-worthy DTS-HD Master Audio 7.1 soundtrack.

Surprisingly, the design doesn't make special use of the surrounds, placing more attention and much of the action across the fronts. This makes sense since the aim for this final installment was more for a sci-fi drama that happens to feature a wide, spacious soundstage with lots of distinct background activity and convincingly fluid off-screen movement. The dialogue and the often emotional conversations between characters are precise and intelligible at all times. The highly-engaging wall of sound exhibits remarkable distinction and detailed clarity in the mid-range. Michael Giacchino's original score benefits tremendously, enjoying a great deal of warmth and fidelity with exceptional separation in the orchestration while lightly bleeding into the sides. When the action suddenly erupts, the surrounds are expectedly put to work, busy with the discrete sounds of debris, the echoes of war cries in the distance and the charge of a military force enveloping the listening area. Occasionally, a few atmospherics are employed, like the rustling of trees overhead or helicopters firing rockets at the military base, to expand the soundfield. The low-end is also on the quiet side for most of the runtime, but when employed, bass is robust and accurate, providing the music, gunshots and explosions a powerful, rumbling presence.

Audio Commentary: Director and co-writer Matt Reeves rides solo for this surprisingly enlightening discussion, talking mostly on the technical aspects of the production but also sharing his thoughts on the plot, the character and various themes.

All About Caesar (HD, 13 min): As the title suggest, a focused piece on the character, the CGI work, the mo-cap technology used and, of course, Andy Serkis's performance.

War for the Planet of the Apes, the third and presumably final installment in the Planet of the Apes reboot series, is an exceptional addition to Caesar's ape rebellion mythology and a superb conclusion to a surprisingly good trilogy. Director Matt Reeves explores various themes of vengeance and hate, but the character-driven sci-fi drama promises tears with a focus on the longing for meaningful relationships and bonds, sprinkled with little reminders of the way we treat our ape cousins, other animals and our planet in general. The Blu-ray wages war with a gorgeous, reference-quality video presentation and a fantastic DTS-HD MA soundtrack that sucks viewers right into the thick of battle. With a majority of the supplemental material being exclusive to the HD format, the overall package is highly recommended for fans of the series.

Sale Price 14.4
List Price 19.99
Buy Now
3rd Party 2.46
In Stock.
See what people are saying about this story or others
See Comments in Forum
Previous Next
Pre-Orders
Tomorrow's latest releases