The Lion King (1994): The Signature Collection

As The Lion King is quite possibly one of Disney's greatest animation achievements, I have very little to add in terms of accolades or thoughts about the film. I loved it when I saw it in theaters when I was 12 and I still love it today. It'd been a number of years since I saw the film so watching it again for this review was a great opportunity to catch up and reminisce. I'm just glad that twenty odd some years later that this film still holds up. Nostalgia can be a fickle beast to wrangle and thankfully the film holds up and I'm not looking back at my youth through rose-colored glasses.

On that point, as Disney is currently remaking the film for "live action," I honestly don't know how they're going to top the animated original. It's pretty much perfect and didn't call for a remake. I guess we'll just have to wait until 2019 to see what Donald Glover, Seth Rogan, and John Oliver bring to the show. At least James Earl Jones is coming back as Mufasa... so I guess there's that to look forward to.

To that end, for a great review of the film, I refer you to our previous coverage for The Lion King Diamond Edition Blu-ray release from 2011 which you can read Here.

The Lion King Signature Collection arrives in a two-disc Blu-ray + DVD + Digital HD package. Housed in a standard 2-disc snapping Blu-ray case with identical slip cover artwork. Also included with this set is a strip of three 35mm film cells on a hard stock paper card with the seminal moment of Simba being raised up over pride rock. However, these are not original film cells from prints, these were printed from digital archive files specifically for this release - making their inclusion feel just a tad less special. The disc opens with trailers for other upcoming Disney releases before arriving at an animated main menu with traditional navigation options.

On the surface, this 1.78:1 1080p transfer appears to be the exact same transfer as the 2011 Diamond Edition release - which isn't a bad thing at all. There is still an appreciable amount of film grain that hasn't been scrubbed away. The character designs look great with nice hard lines that blend in seamlessly with their pre-designed backgrounds. Colors are bright, bold, and beautiful with vibrant primaries and splendid earth tones. The Lion King has always been a beautiful movie and it remains one. However, there is one notable difference between this 2017 release and the 2011 release that you will see in the screen grabs below which occurs around the 1:07:25 mark. 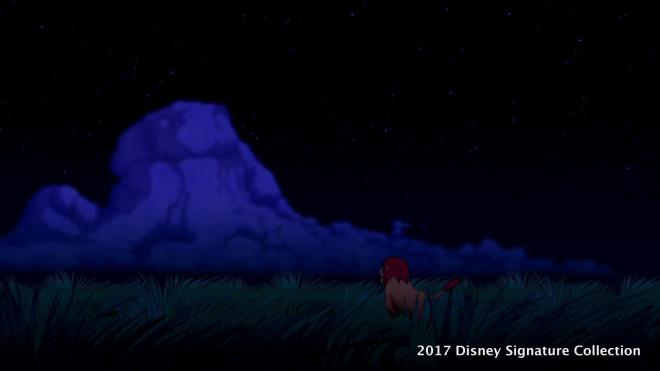 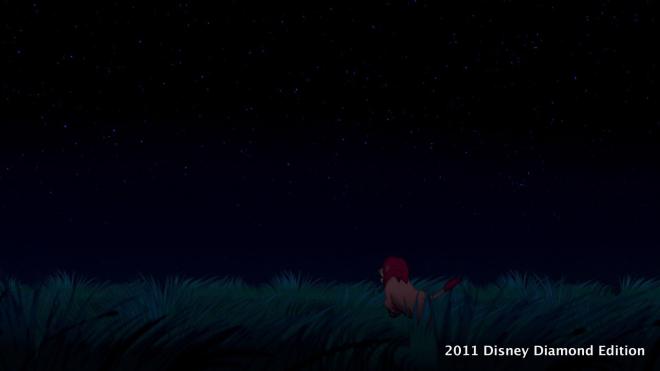 I don't know what happened in that 2D/3D release in 2011, but the omission of that last shot of the cloudy spirit of Mufasa disappearing off into the horizon is a glaring one. Granted it's only about 2-3 seconds of footage, but it's weird that the effect went missing. Back in 2011, I thought it was odd that effect wasn't there but it had probably been 15 years since I last saw the film in one sitting at that point so it didn't really bother me. Seeing it again fully restored brings back a nice coda to the emotional impact of that scene. Simba can't bring back his father, but he can take back what is rightfully his and regain his pride. So kudos to Disney for making sure that little bit was brought back. Again, I can't figure why it was omitted in the first place, and there is no discernible difference in colors or print source to suggest why it wasn't included other than an egregious error that somehow everyone on the production line failed to notice. That said, it's good to see it back and fans who have longed for that brief second or two now have an earnest reason to seek out this release.

Similarly, this Signature Collection includes the exact same English DTS-HD MA 7.1 audio mix. It sounded great in 2011 and still sounds tremendous in 2017. Dialogue, the film's infectious music numbers, and the terrific sound design are terrific. Like most Disney films, the music numbers are a key element and this audio mix delivers the goods. The way they lyrics against Hans Zimmer's Oscar-winning score play together proves for some beautiful audio moments. The music swells, the sound effects of the animals and terrain come rushing around - it's truly an immersive experience. Given the technology of the day, an Atmos track would have been killer - especially with some nifty overhead effects, but I don't lament the lack of that sort of track. It's free of any compression artifacts and sounds incredible with the volume turned all the way up. Thin walls and irritable annoying neighbors be damned.

The bonus features package pulled together for this Signature Collection release of The Lion King is a great mix of some things old and some things new. Not every bit of bonus material ever assembled has been brought back for this release, but I'd say the best stuff made it as well as some new material onto this disc. Second Screen Mode is no longer an option - did anyone use that anyway? If you've never heard the audio commentary or poured through the bonus features before, there is a ton of stuff here for fans to enjoy. The new material assembled for this release I am listing in the HD Exclusive section.

All of the new bonus material that is unique to this Signature Collection release is listed below.

Like many of these Signature Collection releases that have come down the pipeline in recent years from Disney, there's a bit of a give and take in justifying purchasing the film on Blu-ray a second time. As someone who owned the 3D Diamond Edition release from 2011, there's not a whole lot of "new" here to fully justify a double dip on Blu-ray - especially since this release doesn't come with the 3D disc. That said, fans of the film who were irritated at the incomplete effect shot missing the spirit of Mufasa will be glad to see it fully restored - and that may be all die hard fans need to make this release worth the purchase. If you've never owned the film and don't care about the missing 3D Blu-ray disc, this is the edition to pick up. Generally speaking, The Lion King is always going to be a must own film and this new Signature Collection edition doesn't disappoint.

Sale Price 8.31
List Price 26.5
Buy Now
3rd Party 4.96
In Stock.
See what people are saying about this story or others
See Comments in Forum
Previous Next
Pre-Orders
Tomorrow's latest releases