Pirates of the Caribbean: Dead Men Tell No Tales

Pirates of the Caribbean: Dead Men Tell No Tales is a rollicking new tale of the high seas, infused with all the elements of fantasy, humor and action that have resulted in an international phenomenon for the past 13 years. Johnny Depp returns to his Academy Award®-nominated role as the outrageous, swashbuckling scoundrel Captain Jack Sparrow, and is joined by Oscar® winners Javier Bardem (Best Supporting Actor, "No Country for Old Men") and Geoffrey Rush (Best Actor, "Shine").

Pirates of the Caribbean: Dead Men Tell No Tales hoisted their colors and set sail this summer against some rough waters, but the fifth installment in the swashbuckling fantasy franchise managed to snag some decent booty. Of course, it wasn't the large bounty studio execs were hoping to horde aboard their ships, but the plunder was enough to show the franchise remains fairly sturdy and can still float the treacherous oceans a little longer. Nevertheless, after the last two rather mediocre and stormy adventures, this entry reveals audiences are starting to turn a bit green and nauseous from sailing the seven seas close to fifteen years. Or, perhaps, moviegoers are growing weary of the pirating exploits of the notoriously self-obsessed and infamously narcissistic Captain Jack Sparrow. Despite seeing Johnny Depp return to the role that skyrocketed him into worldwide mega-stardom, the movie feels somewhat monotonous and unimaginative by this point, coasting along very familiar shores that dare not embark into stranger tides. (Shiver me timbers, they be bad, but me starting to run low on puns, matey! Ahem, sorry. Moving on.)

As with pretty much every Pirates movie, Depp's Sparrow must again prove himself to a frustrated crew of a loyal few and make arrogant wisecracks and risqué innuendos while battling another supernatural force that rules the oceans. The only difference is that the A-list actor is even more comfortable — not surprising after five films — looking the clown and performing bigger slapstick stunts while narrowly escaping capture or death by the whiskers of his beard through sheer luck alone. By this point in his career and how amazingly versatile he is at slipping into a role, he could be considered as the modern-day Buster Keaton, though some, I'm sure, will be quick to argue against such an absurd notion, considering the amount of CG imagery making the stunts possible. But overlooking that fact, the silliness in his performance when his crew rescued his neck from the guillotine is what brought this thought to mind. Although the leading star of the movie, Depp is consistently the jester and buffoon. Even when his life remains in danger, he bargains the cost of his men rescuing him, delivering each ridiculous line with a seriousness that makes it laughably preposterous. 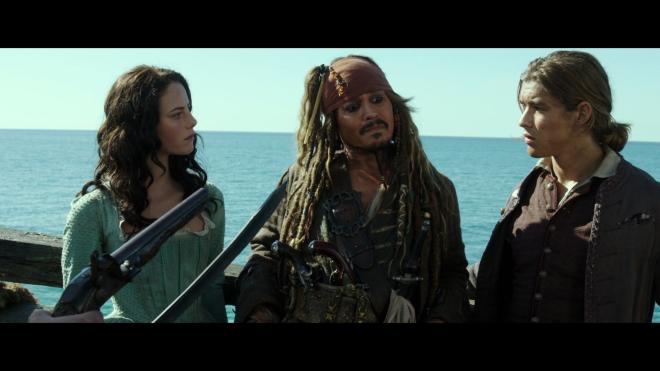 Of course, if it weren't for an ensemble of strong actors willing to play along with Depp's foolishness, the whole thing would be rather sad and embarrassing. (There's an argument for not being the next Keaton.) Kevin McNally returns as Sparrow's most loyal First Mate, as does Martin Klebba's Marty and Stephen Graham's Scrum. And they're allowed to share in the jolly humor with a few lines of their own, such as the bawdy exchange when they learn one character is an astronomer (a donkey breeder, apparently) and horticulturist (say it aloud and the gag speaks for itself). And what sort of Pirates movie would this be if Geoffrey Rush didn't make an appearance — along with pushing the plot along — as the one-legged Captain Barbossa, who now commands an entire fleet of pirate ships and sports of bejeweled peg-leg. It's his deal with the vengeance-obsessed undead Spanish pirate hunter Captain Salazar (an excellent Javier Bardem) that produces a sense of urgency in a story that is little more than a typical treasure hunt. But as expected, Barbossa selfishly plays rival and ally while unexpectedly finding an opportunity for redemption.

And it's these little surprises, a mix of comedy, some heart and swashbuckling action, sprinkled throughout that makes Dead Men Tell No Tales a tolerably entertaining installment. Or at the very least, an improvement over the previous two. However, much of the movie's strength is sadly offset by the forced addition of two new characters that prove to be little else than clumsy plot devices. Kaya Scodelario is uninspired and contrived as Carina Smyth, a determined but characterless woman constantly announcing she's a student of science as though needing to confirm it to herself. But really, she's here to create the aforementioned heart, yet she's never given the screen time to properly generate the emotional impact assumed by the dispassionate ending. Brenton Thwaites also joins Sparrow's crew as the son of Will Turner and Elizabeth Swann, Henry, doing much of the same, except he introduces the plot's MacGuffin, the mythical Trident of Poseidon which gives the owner unlimited power over the oceans. They are ultimately forgettable, serving their purpose for reaching a rather artificial and pedestrian conclusion, hinting at a future installment, but it's just enough for keeping the franchise afloat a while longer before finally sinking.

Walt Disney Studios Home Entertainment brings Pirates of the Caribbean: Dead Men Tell No Tales to Blu-ray as a two-disc combo pack with a code for a Digital Copy. The Region Free, BD50 disc sits comfortably on the panel opposite a DVD-9 copy with a lightly embossed, glossy slipcover. At startup, the disc commences with skippable trailers before switching to a menu screen with the standard options along the bottom, music playing in the background and full-motion clips.

The fifth swashbuckling tale in the fantasy franchise sets sail on Blu-ray with an absolutely gorgeous 1080p/AVC MPEG-4 encode that's practically flawless from beginning to end. Pretty much any scene throughout its two-hour runtime could serve as demo material. Whether we're walking through the streets of Saint Martin or aboard the Black Pearl, the freshly-minted transfer displays razor-sharp lines in the architecture of the town or the build of the ship, revealing the tiniest imperfection and crack on the walls or the wood grain in the blacken, aged planks. Individual hairs are striking, the threading and stitching in the costumes are highly detailed, and every jewel and bead on Jack Sparrow and Captain Barbossa is plain to make out. Even the ghostly CG figures of Captain Salazar's crew show clean, well-defined lines in the clothing, weapons and the creepy floating hairs. Facial complexions appear healthy and accurate to the environment with excellent lifelike textures.

Presented in a 2.40:1 aspect ratio, the high-def presentation also lands ashore with pitch-perfect contrast, providing the silly adventure with a vivid, energetic appeal even during its most somber moments. Crisp, brilliant whites make the fluffy clouds really pop while the dew on the metal parts of Salazar ship seem to glisten beneath the light. Spot-on brightness delivers rich, inky blacks that never hamper the finer background details in the darkest portions of the frame, and the video comes with superb gradational differences that are best appreciated whenever Salazar makes an appearance. Like its predecessors, the fourth sequel, too, comes with a stunning array of lush, richly-saturated primaries that practically scream with enthusiasm and keep some of the more daring moments comical. The rest of the palette is teeming with animated, vibrant secondary hues, making the faces appear natural, the jewels sparkling, the gold glowing and the Caribbean architecture colorful.

Dead Men Tell No Tales speak loud and clear thanks to a superb DTS-HD Master Audio 7.1 soundtrack that, in my estimation, is probably the best audio track of the entire series and possibly of the year. Seriously, right from the start, the design sets out to create a stunningly immersive 360° soundfield that continuously keeps the viewer caught in the middle of the action. The chaos on the streets of Saint Martin come with the screams of soldiers chasing after pirates while the bank slowly falls apart piece by piece. Canon fire echoes all around before the cannonball hits its target, splintering debris in all directions, and the water trickling from the massive wall of ocean water is clearly heard in the sides and rears. Even quieter moments employ the surrounds with the sounds of waves, local wildlife or the crackling sounds of the wood and sails of the pirate ships.

The score of Geoff Zanelli, borrowing extensively from the iconic theme created by Hans Zimmer, also joins the fun by taking up the entire front soundstage with extraordinary clarity and distinction while lightly bleeding into the sides. Imaging feels expansive and spacious at all times, as various effects discretely and effortlessly pan across all three front channels, generating a highly engaging wall of sound. The mid-range is extensive and dynamic, exhibiting splendid detailing and fidelity between the loudest segments, allowing for the smallest shrapnel or wood splinter to be heard flying across the screen. Amid the chaos and pillaging mayhem, dialogue remains crystal-clear and precise — ignoring Depp's sometimes mumbling garbled mess, of course. The low-end is equally satisfying, providing a couch-shaking, room-rumbling force that makes every explosion hit its mark with amazing impact and a few moments that nicely dig into the ultra-low depths for good measure.

Dead Men Tell No Tales: The Making Of A New Adventure (HD): A seven-part short doc exploring various aspects of the production, from returning to the franchise, introducing new characters and seeing some familiar faces to the visual special effects, a surprise cameo and the legacy of the series.

The Matador & the Bull: Secrets of Salazar & the Silent Mary (14 min)

Wings over the Caribbean (5 min)

Jerry Bruckheimer Photo Diary (HD, 2 min): A collection of the producer's personal photos from the set.

A Whale in Poseidon's Tomb

Pirates of the Caribbean: Dead Men Tell No Tales hoists their colors and sets sail for another adventure against the treacherous seas and a supernatural force that proves itself a worthy adversary. Johnny Depp and Geoffrey Rush return as rivaling partners in crime, and joined by the excellent Javier Bardem as the vengeful ghost Captain Salazar. However, although the fifth installment in the swashbuckling fantasy franchise remains afloat for most of the shorter runtime, it sadly drops anchor with the addition of Kaya Scodelario and Brenton Thwaites, a pair of orphans in search of father figures. The Blu-ray lands ashore with a superbly gorgeous video and a reference-quality DTS-HD MA soundtrack that will bring the house down from a barrage of cannon fire. With a puny bounty in the supplemental chest, the overall package nonetheless makes a strong treasure find for those loyal to Captain Jack Sparrow and his crew.

Sale Price 14.46
Buy Now
3rd Party 10.93
In Stock.
See what people are saying about this story or others
See Comments in Forum
Previous Next
Pre-Orders
Tomorrow's latest releases