Confined to an asylum for the criminally insane for the past four years, Nica (Fiona Dourif) is wrongly convinced that she, not Chucky, murdered her entire family. But when her psychiatrist introduces a new group-therapy tool — a "Good Guy" doll — a string of grisly deaths plague the asylum and Nica starts to wonder if maybe she isn't crazy after all. Andy (Alex Vincent), Chucky's now-grownup nemesis from the original Child's Play, races to Nica's aid. But to save her he'll have to get past Tiffany (Jennifer Tilly), Chucky's long-ago bride, who will do anything, no matter how deadly or depraved, to help her beloved devil doll.

Cult of Chucky picks up a short time after the events of the previous movie where an entire family was murdered by the celebrated genre darling Chucky. But in a post-credit scene, fans of the original Child's Play were surprised by the return of an adult Andy Barclay (Alex Vincent) having the last laugh. In the opening moments of this latest entry, we find Andy on a humiliatingly bad date — the woman revealing she knows all about Andy thanks to a simple Google search. Apparently, the traumatizing experience of fighting a Good Guy doll possessed by the maniac killer Charles Lee Ray has turned him somewhat into a celebrity, and that chapter of his life continues to haunt the poor guy into a socially awkward adulthood. But on the bright side of living alone in a remote cabin with a stockpile of guns, Andy can sit and chat away his troubles with the only friend who's stuck with him until the end: the scarred, severed and still living-talking head of the original Chucky (Brad Dourif). But Andy swears he's not crazy and has moved on with his life.

Other the hand, somewhere in the same town or across the state — this is never made clear — the survivor of the last movie and paraplegic Nica Pierce (Fiona Dourif) is totally batshit bonkers and coming to terms with it in a hospital with other like-minded folks. Sentenced to a mental institution for the slayings, Nica spends her days making friends and has better luck getting lucky with a date in the frequently confused but endearingly charming Malcolm (Adam Hurtig). Others are not quite as friendly, but at least she's surrounded by supportive people who understood her plight — if by supportive, we mean either ignore her or verbally bully her for being a murderer. It'd be nice to see Dr. Foley's (Michael Therriault) credentials because he seems terrible at managing the group and creepily keeps eyeing Nica while (intentionally?) taunting her with Good Guys. One of which another patient adopts as the son she once smothered with a pillow. Not entirely sure, but it also seems as though the filmmakers are implying our two main protagonists would much rather trade places. She's totally sane but treated as crazy. He definitely has issues but is allowed to walk free. 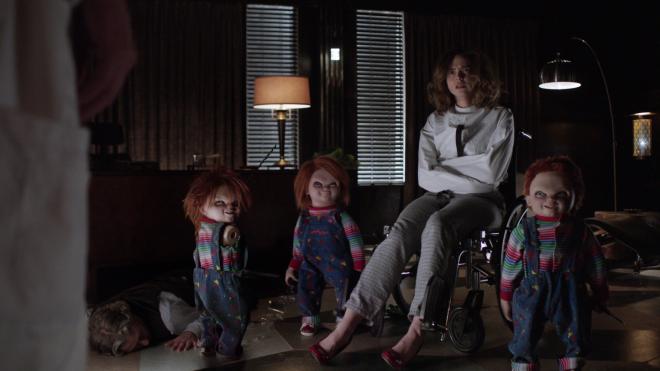 Don Mancini, the original creator of the Chucky story, writer for every chapter of the series and helmer since 2004's Seed of Chucky, comes back for this the seventh and apparently not last installment to the 30-year-old franchise. And as he did in the previous movie, Cult is a return to the moodier and more atmospheric tone of Tom Holland's original thriller intentions, and Mancini uses the sterilized, uninspiring hallways of the hospital to great effect. But he also can't help injecting some of the same dark, twisted sensibilities he introduced in parts four and five. Though for this wicked tale of confronting one's ugly past, the tongue-in-cheek humor isn't as laugh-out-loud blatant as it is cleverly sarcastic and knowingly subversive. One of the more memorable moments sees Chucky quietly stalking the empty halls in the middle of the night, looking for Nica, but he's interrupted by an older patient who believes herself dead (Marina Stephenson Kerr). The back and forth with a confused Chucky is amusing, if not also weird because the creepiness of the scene is momentarily put on pause and sets a tone that teeters between comedic and straight gory horror.

Jennifer Tilly also reprises her role as Tiffany Valentine, Chucky's long-time love interest and equally demented partner-in-crime who looks a lot like the actress Jennifer Tilly. Her appearance is a minor running gag that's neither funny nor quirky, revealing one of several problems with this particular production. It's not entirely bad as it can be quite fun at times, but some of the humor also doesn't always gel with the visuals, which honestly, are surprisingly impressive. Over the years, Mancini has grown as a filmmaker, showing more style behind the camera with each entry and a willingness to take risks. Although not as creepy or mildly scary as its predecessor, Cult of Chucky comes with an interesting visual flare that almost beautifies the gorier, more brutal aspects of the movie into separate lovely vignettes or romanticized portraits, such as the slow-motion scene of Claire's (Grace Lynn Kung) death. Unfortunately, the movie's prettier and more fascinating qualities tend to be undermined by the hit-or-miss gags and eye-rolling one-liners or Andy's head-scratching failed attempts to end the madness.

Granted, the ending is a nice twist with another post-credits sequence hinting at more installments, but everything leading up that satisfying conclusion ultimately feels like forced padding for better future sequels.

Universal Studios Home Entertainment brings Cult of Chucky to Blu-ray as a two-disc combo pack with a code for an UltraViolet Digital Copy. The Region Free, BD50 disc sits comfortably on a panel opposite a DVD-9 copy inside a standard blue keepcase with a lenticular slipcover. The unrated, 91-minute version of the movie is accompanied by an R-rated, 90-minute version on the same disc. The difference between them is the added footage of gore, blood and language, but nothing truly significant. Viewers can skip over several internet-based previews before switching to a menu screen with full-motion clips and music.

Chucky torments Blu-ray for the seventh time armed with an excellent AVC-encoded transfer, although it comes with a few notable issues.

Shot on HD cameras, the video comes with the expectedly bland, sterile and made-for-TV digital appearance that's relatively unattractive because it lacks texture. Not positive about this, but it also seems as though the filmmakers tried to correct this by filming with diffusion filters, giving the picture a soft and hazy look throughout. Thankfully, this doesn't completely ruin the presentation, as minor background objects remain visible in the distance. The stitching and threading in Chucky's iconic Good Guy uniform is razor-sharp, and facial complexions are often highly revealing during close-ups. However, there is the occasional blurry moment, mostly when the light shines brightest in any given scene. And there are also instances of very mild aliasing along the sharpest edges and barely-perceptible banding along the darkest portions of the frame.

On the positive side, though, contrast is spot-on with crisp, brilliant whites, giving the 1080p video a nice, energetic pop that pleasingly complements the story's twisted, dark humor. Black levels are surprisingly rich and opulent, providing the 1.78:1 image appreciable depth of field and outstanding shadow detailing in the many dark, poorly-lit interiors. Primaries, too, are upbeat and full-bodied, particularly the reds in Chucky's clothes, the gooey fake blood and whenever Tiffany makes an appearance. Secondary hues are somewhat limited due to the stylized cinematography, but they nonetheless appear accurate and animated.

The seventh installment in the series also finds a friend to play with thanks to a cracking, slicing-n-dicing DTS-HD Master Audio 5.1 soundtrack that won't exactly scare the bejesus out the house, but it sets the mood splendidly.

Much of this is due to Joseph LoDuca's score filling the soundstage and bleeding into the sides, generating a wide and engaging soundscape. It also exhibits excellent distinction and clarity in the higher frequencies, providing the presentation with a great deal of warmth and fidelity, even during the loudest moments. Given this is a front-heavy presentation, a majority of the attention is placed on the dialogue and character interactions, which is well-prioritized and always intelligible, and many of the background effects are spread among the front three channels, displaying great separation and fluid movement across the screen. This is also means the surrounds are only occasionally employed, but when doing so, directionality is discrete and decently enveloping. And the amount of silence could be argued as adding to the creepy atmosphere, given the plot takes place inside a mental hospital. Finally, low bass is not particularly noteworthy, but it's appropriate and adds a hearty presence to the on-screen action.

Audio Commentaries: Writer and director Don Mancini chats with producer and animatronics supervisor Tony Gardner about the technical details of the production, including the Chucky dolls and the visual design of the movie, while sharing thoughts on the franchise, characters and evolution of the story to this point.

The Dollhouse (HD, 8 min): Series of cast & crew interviews talking about their involvement.

Inside the Insanity (HD, 7 min): More interviews on the franchise's history and legacy and future.

Good Guy Gone Bad: The Incarnations of Chucky (HD, 5 min): The making of the doll and the animatronics work performed for bringing the creation to life.

Don Mancini returns for Cult of Chucky, the seventh but not final installment in the possessed murdering doll franchise. On the whole, it's a good and occasionally surprising entry, but some of the humor tends to undermine some of the more creative and weirdly fascinating visuals. Ultimately, it's padding for greater and hopefully better things. The Blu-ray brings the movie to life with an excellent audio and video presentation that only adds to Mancini's unique directing style. With a middling and disappointing selection of supplements, the overall package is nonetheless strong and sure to please devoted, loyal fans of Chucky.

Sale Price 9.5
List Price 19.98
Buy Now
3rd Party 19.98
In Stock.
See what people are saying about this story or others
See Comments in Forum
Previous Next
Pre-Orders
Tomorrow's latest releases