ILLUMINATION, who brought audiences the worldwide blockbusters Despicable Me, Despicable Me 2 and Minions, continues the adventures of Gru, Lucy, their adorable daughters — Margo, Edith and Agnes — and the Minions. Joining Steve Carell and Kristen Wiig in Despicable Me 3 is Trey Parker as Balthazar Bratt, a former child star who's grown up to become obsessed with the character he played in the '80s, and proves to be Gru's most formidable nemesis to date.

Despicable Me 3 proves the CG animated franchise still has a few tricks inside its bag of villainy and will continue its nefarious plan for world domination . . . or more specifically, to dominate the world of modern animated comedies. Granted, the movie may not compare to the quality and canon of Disney and Pixar, but its immense popularity has turned the sequels and a spinoff into box-office gold with those entries ranking as some of the highest grossing animated films of all time. Not that profitability proves anything. Only pointing out that creators Illumination Entertainment and their parent company Universal Pictures have little reason to stop cranking out more slapstick misadventures in the life of former supervillain Felonious Gru (Steve Carell). In his mad pursuit to be the greatest villain of all time, he probably should've given more thought of breaking into Hollywood sooner where this universe of wackily eccentric criminals grows with each series entry. And while it may be a matter of opinion and personal taste, the franchise just seems to get better, wackier and funnier with each installment, making this second sequel a fantastic addition.

It would seem the creators have also discovered the perfect bank to plunder, chock full of sinfully delicious ideas for future installments. Since Gru is retired from the supervillain business, committed to stopping and apprehending evildoers around the world as an agent of the Anti-Villain League with his now-wife Lucy (Kristen Wiig), writing duo Cinco Paul and Ken Daurio have the bald, pointy-nosed antihero go toe-to-toe with the villains of his past. And just when we think they couldn't come up with a foe more outlandish than a former masked luchador, the writers introduce fans to Balthazar Bratt (voiced by South Park creator Trey Parker), a disgruntled former 1980s child star angry with the world for cancelling his TV show. Sporting shoulder pads in a skintight purple suit while rocking the flattop and mullet with a Tom Selleck mustache, the character is a treasure trove of pop-culture references, though some might go over the heads of most kids. Then again, who wouldn't laugh at the sight of pink Bubblicious bubblegum as a weapon, a Rubik's Cube as a multicolored smoke bomb, and a collection of killer toys called Bratt Pack. 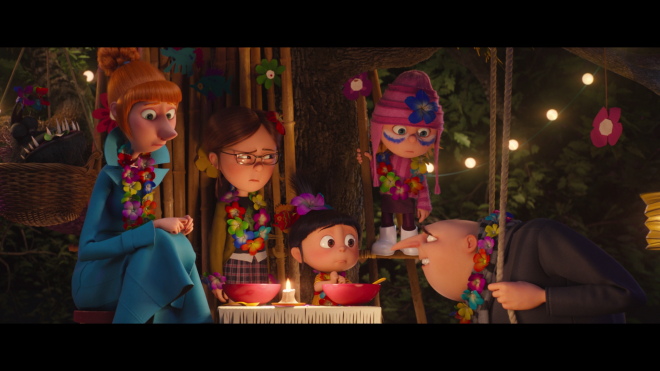 What also continues making each installment a success are plots centered around the theme of the modern family, of establishing familial love not due to blood but by choice, and this third entry is simply an extension of that theme and the previous two movies. While Gru discovers he has a long-lost twin brother named Dru (Carell) and connects with him by rediscovering his inner villain, Lucy struggles with her new position as mom to the three adopted girls, Margo (Miranda Cosgrove), Edith (Dana Gaier) and Agnes (Nev Scharrel). Part of the difficulty is knowing when to let loose momma bear on anyone posing a threat. Beating on local pub patrons at the sound of Agnes's glass-shattering scream might be a bit over the top, but arguing with another unhappy mother cursing the family is just right. But there is also something to be said of the filmmakers having Gru battle criminals pursuing the same ambitions his younger self was once obsessed with. Since becoming a responsible father to three impressionable young girls, Gru is essentially fighting the evils of his past, to right the wrongs he committed and adjusting his goals to include his growing family.

Since becoming the most popular aspect of the franchise, along with also being granted a standalone spinoff of their own, the ever-growing Gru family also involves those pint-sized, pill-shaped yellow Minions, enthusiastically lining up for more harebrained lawlessness when their once-fearless leader discovers his unemployment. And for the little ones in the audience, Despicable Me 3 features the banana-obsessed henchmen on a side adventure of their own, a subplot that surprisingly offers just as many laughs as Gru's hysterical duels with Bratt. When their aspiration of returning to a life of crime is shot down, the outraged crew follow the disappointed Mel and runaway to only be arrested during a televised talent show and find they are the big dogs in the slammer. Littered with oddball twists and surprises, the animated sequel is a delightful riot largely driven by genuine sentiments of family and children learning life comes with as many dangers and disappointments as it does full of affection and unconditional love. Admittedly, Dru doesn't leave much of an impression, but the series feels stronger than ever and heading in the right direction.

Universal Studios Home Entertainment brings Despicable Me 3 to Blu-ray as a two-disc combo pack with an UltraViolet Digital Copy. A Region Free, BD50 disc sits comfortably opposite a DVD-9 copy of the movie. Both are housed inside a standard blue keepcase with a lightly embossed slipcover. After several skippable trailers, viewers are taken to a menu screen with full-motion clips, options along the left side and music.

The despicable family adds a new member thanks to a phenomenally gorgeous, reference-quality 1080p/AVC MPEG-4 encode. Every scene is brimming with razor-sharp lines in various buildings, gadgets and the clothing. When in Freedonia, the stucco walls of the antiquated shops are cracked and aged with tiny bumps, and the lettering on signs and windows are legible from a distance. Every little feature, button and wire in Gru and Balthazar Bratt's arsenal of goofy weapons is plainly visible. In fact, 80s fans with catch every pop-culture reference decorating Bratt's bedroom and impenetrable fortress, almost as if this is where the decade went to die. Most impressive is being able to make out every stitch and thread in the clothes of each character, down to the point of wanting to pick the itsy-bitsy fur balls of Edith's woolly sweater.

Presented in its original 2.35:1 aspect ratio, the HD video is bursting and overflowing with a sumptuous and dazzling array of colors. From start to finish, the animated movie is a cornucopia of soft pastels, lavishing the screen with the warm pinks surrounding Edith and Agnes, the exuberantly bouncy yellows of the minions and Lucy's cyan-teal outfits contrasting her bright titian hair. Primaries are equally lush and spirited, providing the action and comedy with a great deal of energy and clownish delight. Contrast and brightness are superbly balanced, delivering crisp, pitch-perfect whites in Dru's spotless, immaculate and villain-free suits. As his humble antithesis, Gru's not-so-evil clothing is made of different shades of dark coal gray, displaying some amazing variety in the blacks. And the smallest object in the background remains visible within the richest, midnight blacks of the darkest corners of the frame, giving viewers and fans alike a splendid feast for the eyes that'll have owners screaming like Agnes seeing a unicorn.

The third entry in the animated series travels back to the 1980s with an excellent and generally satisfying DTS:X soundtrack that'll rock the house with some tubular, crime-fighting tunes.

On the whole, there isn't much going on in the overheads, except for the occasional Minion raining down from the sky, rockets hurling towards their targets or a swarm of Bratt packs flying into action. There are also a couple very light and subtle moments of atmospherics traveling above the listening area, but overall, the sides and rears do much of the real leg work, generating an amusingly satisfying soundfield that draws viewers into the hilarious action. The score and song selections also do well bleeding into the front heights to create a half-dome wall of sound while also exhibiting discrete clarity and separation in the mid-range. Imaging continuously feels broad and expansive as a variety of noises in the background fluidly and effortlessly pan across the three front channels, creating an outstanding sense of presence and space. Vocals are precise and very well-prioritized, and the low-end can be fairly commanding at times, mostly during scenes of explosions, but all in all responsive with a hearty, room-energizing oomph in the music.

Character Profiles (HD, 11 min): Five separate interviews with the cast sharing their thoughts on the characters.

The Making of (HD, 7 min): A brief discussion on the production with cast & crew interviews and BTS footage.

Mini-Movie (HD, 4 min): Kyle, Gru's dog, is the highlight in his search for love in "The Secret Life Of Kyle."

Developing Dru (HD, 4 min): A few minutes on creating and designing the latest addition to the family.

Sing-Along (HD, 2 min): Kids can sing along to the chorus of Pharrell Williams' song "Doowit."

Wanted Posters (HD, 2 min): Much of the same as the above.

Deleted Scene (HD): One scene with Edith misbehaving and introduced by Dana Gaier.

Despicable Me 3 proves the CG animated franchise still has a few tricks inside its bag of villainy and will continue its nefarious plan for cranking out more slapstick misadventures in the life of former supervillain Felonious Gru and his ever-growing family. While introducing a new wackily eccentric criminal mastermind into the mix, the animated sequel is a delightful riot largely driven by genuine sentiments of family and children learning that life comes with as many dangers and disappointments as it does full of affection and unconditional love. The Blu-ray arrives with a gorgeous, reference-quality HD video presentation and an excellent DTS:X soundtrack, sure to keep the kiddies cheering at the colorful hilarity. With a decent collection of supplements to boot, the overall package is recommended for fans and the curious alike.

Sale Price 7.95
List Price 14.98
Buy Now
3rd Party 3.99
In Stock.
See what people are saying about this story or others
See Comments in Forum
Previous Next
Pre-Orders
Tomorrow's latest releases