A talented, young getaway driver relies on the beat of his personal soundtrack to be the best in the game. But after being coerced into working for a crime boss, he must face the music when a doomed heist threatens his life, love and freedom.

In Edgar Wright's relatively short career — he's only directed six films, three of which were successful, Baby Driver being his biggest hit yet — he's shown a strange love affair with familiar formulas often seen as tired and worn out. However, his incessant tweaking and meddling with commonplace tropes have revealed a talent for reigniting interests in those truisms, as proven by the rapid cult status rise of all his films. And this latest action crime drama does precisely that: a surprisingly entertaining and thrilling genre filmmaking exercise that delivers the goods.

The title is actually pretty simple, which in turn, arguably reflects the plot's central theme and the filmmaker's overall goal. It's the name of our principal protagonist, played intentionally cold and indifferent by Ansel Elgort. And he is, you guessed it, a driver! In fact, we're told by the mysterious criminal mastermind known only as Doc (Kevin Spacey) the babyface kid — get it, a young man with a face so smooth it's never been touched by a razor and his name is Baby — is the best getaway driver in the biz. (I'm hip with the crime lingo.) And to demonstrate this, Wright opens the film with Elgort behind the wheel of a red, sporty Subaru waiting for bank robbers and listening to music that not only puts him in the mood and right state of mind, but the collection of iPods in his pockets are a plot device for the character while allowing some wildly creative touches. Baby uses music to help drown out the ringing in his ears from tinnitus, which he developed from a car accident, and Wright uses the tunes as an opportunity for pacing action sequences according to each song's rhythm, which frankly, is the reason why this movie is so freaking cool. 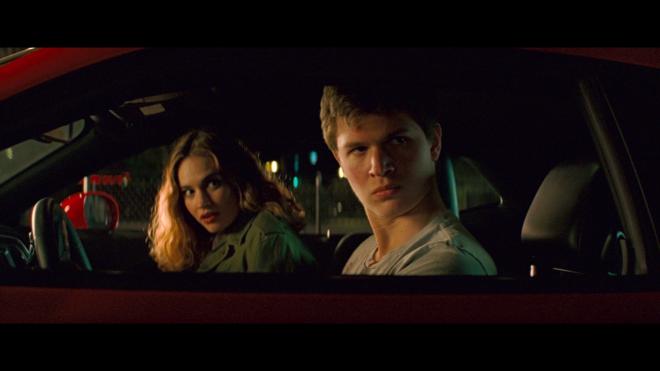 In that same opening, after bank robbers (Jon Hamm, Eiza González and Jon Bernthal) jump in the car, Baby screeches and skids through busy city streets like an expert drift racer. The car stunts are not wholly original — and this goes for the entire movie — but they are nonetheless noteworthy. First, they are mostly practical with very little or barely perceptible CGI, adding to the thrills of seeing head-on collisions and the many near misses. And second, the scenes are so incredibly well-edited and timed with the diegetic music, they feel fresh and exciting, even going so far as to almost seem wildly unpredictable. A favorite is the armed truck job where a civilian in a pickup truck decides to be hero and pursue the criminals. Meanwhile, The Damned's "Neat Neat Neat" plays loudly in the background, making the audience grip the armrest tightly. However, the highlight must be the final heist — you know the one, the last job before getting out permanently but it predictably all goes wrong. The ensuing gunfire and ricocheting bullets go perfectly to the hard-rock beat of Focus's classic "Hocus Pocus," and it is practically a thing of electrifying craftsmanship.

And being a standard genre piece that doesn't deter much from the formula, the tension in Baby Driver doesn't come only from the dangerous stunts. Our would-be but ever so reluctant hero needs a reason to want out this lifestyle while at the same time being the motive behind that one final, fateful big score. And this comes by way of the unrealistically friendly waitress Debora (Lily James), flashing a smile and a singing voice that makes Baby's heart skip a beat. Although this aspect of Wright's plot feels somewhat obligatory and a bit contrived, the character serves her purpose as the love interest itching at the back of Baby's mind while also giving rise to the suspense, particularly when Jamie Foxx as the violently impulsive Bats makes an appearance and feels threatened by the naturally talented driver. This could all be argued as the film's weakest area, but it could also be a larger, albeit rather minor, drawback of the subgenre as a whole, seen in other crime thrillers like Thief, Heat and Drive. Nevertheless, it's to Wright's credit that we forgive this during the moment and simply enjoy the thrilling, fast-paced ride while listening to some awesome tunes.

Sony Pictures Home Entertainment brings Baby Driver to Blu-ray with a flyer for an UltraViolet Digital Copy. The Region Free, BD50 disc comes inside the standard blue, eco-vortex keepcase. At startup, viewers can skip several previews before switching to the standard main screen with music playing in the background.

Baby drives wildly through the streets of Blu-ray, revving a strong and stealthy AVC-encoded engine under the hood. Unfortunately, the machine purring underneath can't do go distance and doesn't compare to other, similar vehicles of the same year.

Shot on a combination of digital cameras and traditional 35mm film, the freshly-minted transfer screeches unto the scene with plenty of sharp detailing in the architecture of buildings, the gravel of city streets and Baby's apartment. The various cars throughout expose some of the finer aspects of each one, from the stitching of the leather and the fabric interiors to the chrome trim exteriors. Only, much of the photography seems to be the result of diffusion filters since it has an interesting dreamy appeal that's attractive, but it makes much of the presentation a tad softer than would be expected from such a recent production. Thankfully, despite the stylized cinematography, the 1080p video comes with fine, very well-defined lines.

Where things grow a bit complicated are the rather disappointing brightness levels, which is very surprising. The blacks in clothing and other various objects could be stronger but are, for the most part, rendered close enough to accurate. More troubling are the dull, murky shadows that thankfully don't ruin visibility of the finer details, but since a good portion of the story takes place at night and inside dimly-lit environments, such scenes make much of the 2.39:1 image appear flat and two-dimensional. On the other hand, daylight sequences display spot-on contrast and crisp, pitch-perfect whites, allowing viewers to see far into the distance and giving the presentation appreciable dimensionality. The palette is also somewhat affected by the film's deliberate look, but only very, very lightly and not enough to really create any issues. A colorful, vivid array of primaries, especially the reds of cars, the clothing and Bo's diner, shower the screen with life and energy while a lovely selection of secondary hues provide warmth and keep things animated.

Edgar Wright runs circles around the action crime genre with a thrilling DTS-HD Master Audio 5.1 soundtrack that'll have the listener, at times, feel as though sitting in the getaway car.

When the action gets going, various discrete effects pan into the surrounds, like the noise of city traffic, helicopters following the chase from the sky or other cars left behind as Baby zooms past them. However, this isn't always very consistent, as a majority of that activity is maintained across the front soundstage, various sounds zipping across the three channels flawlessly and with convincing off-screen clarity. Other atmospherics also remain in the background, generating a welcoming and broad sense of space that's highly engaging.

The mid-range exhibits superb clarity and distinction during the loudest moments, which Steven Price's score benefits from tremendously, filling the room with warmth and fidelity. Each crunch of metal on metal during the many crashes are detailed and reverberate throughout the room with appreciable realism. Amid the vehicular mayhem, vocals are never drowned out by the loud collisions, which is much appreciated since Ansel Elgort's character is very soft spoken. For bass enthusiasts, the low-end doesn't quite deliver the sort of impact expected from the visuals, but it's nonetheless palpable and responsive, given the action and music some substantial weight and presence.

Audio Commentaries: A pair of commentary tracks kick off with writer and director Edgar Wright amusingly explaining the story's genesis, inspirations, various areas of the production and the role of music in the story. The second is a conversation with Wright and cinematographer Bill Pope on the technical aspects, the look of the film, photographing the practical stunts and the shooting locations.

That's My Baby: Edgar Wright (HD, 9 min): On the director's approach and preparation to the project.

Devil Behind the Wheel: The Car Chases (HD, 7 min): Preparation and shooting the practical stunts.

Mozart In a Go-Kart: Ansel Drives (HD, 6 min): The actor trains for his role as an experienced drifter.

I Need a Killer Track: The Music (HD, 6 min): Interviews on the role of specific song selections.

Find Something Funky on There: The Choreography (HD, 6 min): The marriage of songs to the stunts and action.

Storyboard Gallery (HD): Four collections of storyboard images that can be watched separately.

Edgar Wright's Baby Driver is a surprisingly entertaining and thrilling genre exercise that delivers the goods expectations. Although its adherence to formula leaves little room for surprises, the crime thriller nonetheless feels fresh and exciting because of practical car stunts that were designed to the rhythm and beat of specific song selections. The movie speeds through the streets and highways of Blu-ray with a great audio and video presentation. With a treasure trove of supplements, the overall package screeches home and is recommended for fans of Wright and heist thrillers in general.