Transformers: The Last Knight shatters the core myths of the Transformers franchise, and redefines what it means to be a hero. Humans and Transformers are at war, Optimus Prime is gone. The key to saving our future lies buried in the secrets of the past, in the hidden history of Transformers on Earth. Saving our world falls upon the shoulders of an unlikely alliance: Cade Yeager (Mark Wahlberg); Bumblebee; an English Lord (Sir Anthony Hopkins); and an Oxford Professor (Laura Haddock). There comes a moment in everyone's life when we are called upon to make a difference. In Transformers: The Last Knight, the hunted will become heroes. Heroes will become villains. Only one world will survive: theirs, or ours.

About a quarter of the way into Transformers: The Last Knight, viewers will be wishing Michael Bay's fifth installment in the rock 'em, sock 'em franchise would transform into a different and far better movie. Or perhaps, they might fantasize a knight in a shiny white Dodge Charger crashing through the screen and saving everyone from having to ever watch this spectacularly jaw-dropping mess of a motion picture. The real deception perpetrated by the Decepticons is in convincing any studio production to allow Bay to continue pumping this disastrous garbage. About halfway into it, you'll practically be begging for Earth's annihilation by some unremarkable robot creator — which also happens to be female for absolutely no reason whatsoever — whose only motivation is... Is to, uhm... Is? Actually, the robot sorceress Quintessa — who wears a long flowing dress, speaks in a sexy voice even when angry and voluptuous for a planet of non-gender-specific robots that are nonetheless absolutely masculine — never explicitly makes her motives clear, except that she wants the staff the mythological wizard Merlin used in King Arthur's war against the Saxons.

If that little factoid throws readers, as well audiences, into a mind-bending loop, then buckle-up because it only grows progressively and mind-numbingly worse. In this ever-expanding universe of warring sentient robots that can transform into a variety of complex machines, Arthur and his roundtable of knights make an appearance, and a drunken Merlin — because in Bay's universe, that's comedy — risks DUI charges on a horse to retrieve a magical staff from ancient transformers. Apparently, this brings all previous entries, which themselves are worse than their predecessor, into a larger — much, much larger —whole, and it somehow is supposed makes sense. Only, it absolutely doesn't! It simply makes for a more spectacularly massive, muddled mess of confusion. The cold open is inconsequential and doesn't affect the rest of the movie in the slightest, done purely to satisfy the filmmakers' egos. To shorten the 150-minute runtime, it could easily have been done in some random conversation of exposition. Oh, wait! That's exactly why Sir Anthony Hopkins makes an appearance in the first place, to redundantly reiterate those events to an equally confused and bewildered Mark Wahlberg, reprising his role as Cade Yeager. 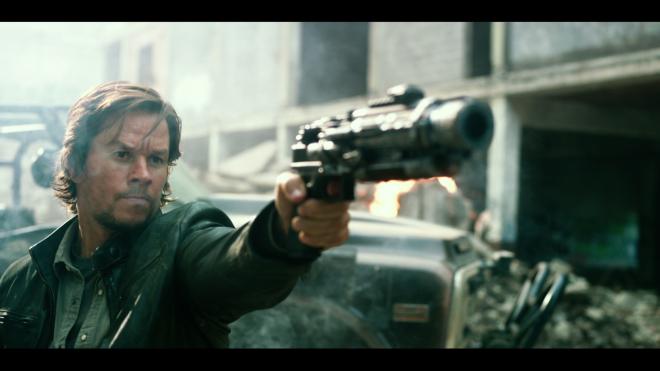 A good point of comparison to better illustrate this frustrating junkyard as a prime example of bloated movie badness is The Fast and the Furious sequels. After eight entries to the franchise while revving up for a ninth, how is that the series continues riding into the sunset with a full tank of gas, but the Transformers movies continues to chug along on fumes and four flat tires. The answer is that those movies rely on simple, straightforward plots with a single objective in mind to fuel the engine. Bay's only claim to fame currently, on the other hand, is being pushed down the road by too much plot. It's up in the air if Megatron wants to destroy the humans of Earth, rebuild Cybertron or is in cahoots with Quintessa. Hopkins's Sir Edmund Burton is the last remaining survivor of a secret organization hiding the existence of Transformers and their involvement in major, world-altering historical events. Optimus Prime is easily seduced by the dark side. There's a spunky, sassy preteen always getting in the way. Wahlberg is lonely but discovers he's predestined for bigger things, and the sole purpose of robots is for delivering one-liners.

This makes up a good chunk of everything one must follow in The Last Knight, but there's also other ridiculous nonsense bashed into the heads of audiences, namely characters mentioning the name of Unicron, which is purely done for the sake threatening moviegoers with a sixth installment. Ultimately, though, the real disaster is the filmmaking itself, which should serve as a master class of everything that could go horribly wrong when excessively editing a movie. The edits are rapid, trivial and irrational, making the action incomprehensible, rarely allowing viewers a moment of respite even when characters are simply talking. On the other hand, this reveals Michael Bay doesn't know how to compose a frame for storytelling outside of making it look cool or how to visually give importance to objects or characters. Ironically, Laura Haddock is always nicely shot and glamorous in her tight-fitting clothing no matter the situation or chaos erupting around her. Her character pours more fuel to a troubling fetishistic "male gaze," repeatedly reminding us of her extensive qualifications, touting her genius, but never allowed to use her intelligence.

But that's another discussion for us to ignore some other day. Look over here and enjoy loud, gas-guzzling vehicles making big, ear-piercing explosions while also saving Earth from an imaginary threat.

Paramount Home Entertainment brings Transformers: The Last Knight to Blu-ray as a three-disc combo pack with an UltraViolet Digital Copy. Inside the blue, eco-cutout case with a shiny, lightly-embossed slipcover, a Region Free, BD50 disc sits opposite another BD50 disc containing the supplements, which rests atop a DVD-9 copy of the movie on the same panel. At startup, viewers are taken directly to a static menu screen with the usual selection along the bottom and music playing in the background.

The fifth rock 'em, sock 'em spectacular in the robot franchise brings the end of the world to Blu-ray with a stunning, reference-quality 1080p/AVC MPEG-4 encode. From the individual metallic parts of each Transformer to the fine threading in every person's costume, the freshly-minted transfer is consistently razor sharp. The tiniest scratch and dent on the robots from the many battles survived is plainly visible, and facial complexions in the humans are highly revealing with incredible lifelike textures, exposing every pore and negligible blemish.

There were a couple very minor instances of softness, but they were far and few in between, mostly the result of the particular photographic intentions of the filmmakers rather than a defect in the encode. Some of this could also be related to the awkward and continuously distracting alternating aspect ratios, switching between 1.90:1 and 2.00:1 to traditional 2.39:1. On the whole, the presentation is gorgeous to look at, feeling every bit like Bay's music video stylings.

Contrast is spot-on with pitch-perfect whites, allowing for some stunning visuals and amazing clarity into the far distance. Who knew a junkyard could be romanticized under the right conditions? The edges of each CG robot come with a dazzling shine and glow throughout. Black levels are opulent and richly layered with outstanding gradational differences without ever hampering the shadow details during the darkest, poorly-lit sequences, such as when our heroes explore Cybertron. An extraordinarily varied palette displays an array of sumptuous colors, lavishing the screen with a vibrant, animated feel that keeps things lighthearted and energetic. Overall, it's an impressive and cinematic presentation sure to please those still loyal to the franchise.

Along with an already outstanding video presentation, The Last Knight comes crashing to home theaters with a bombastic, rowdy Dolby Atmos soundtrack that's sure to give anyone's system a healthy workout.

Right from the start, the battle between King Arthur and his knights against the Saxons ignites the room as balls of fire fly through the air, above the listening area, and land with thundering explosions either in the back of the room or just off to the sides. When Merlin comes charging in while riding the robot dragon, the roars echo into the overheads, and the fire spewing from its mouth torches the land in the sides and rears. The rest of the design does much of the same during the many action sequences, as debris rains down from above and lands all around. Although the ceiling speakers go silent during quieter moments, other subtle sound effects pick up the slack, discretely traveling from one channel to the next with flawless panning, generating a satisfyingly immersive soundfield.

Across the front soundstage, imaging is wonderfully expansive and spacious with a variety of noises fluidly moving from one side of the screen to the other. A richly dynamic mid-range exhibits crystal-clear clarity during the loudest, ear-piercing moments, allowing for every clang, crash, and clank of metal against metal to remain distinct and continuously audible. Vocals are precise and very well-prioritized so that listeners can still enjoy all the silly, mawkish dialogue when the rest of the world seems to be on the brink of annihilation. As expected, a robust and highly responsive low-end delivers an authoritative wallop to every explosion, reverberating throughout the entire room that the neighbors can surely feel.

Other than a DVD version and an UltraViolet Digital Copy, the supplements are exclusive to the Blu-ray.

Shy of celebrating ten years since Michael Bay first introduced moviegoers to the warring sentient robots, Transformers: The Last Knight is a grueling, punishing test on one's patience, featuring a needlessly complicated, bloated plot, questionable camerawork and terrible editing. As the fifth rock 'em, sock 'em installment, the movie ultimately adds nothing to the ear-piercingly loud franchise, except forcefully expand the mythology while also offending and exhausting the senses.

Thankfully, the Blu-ray crashes to Earth with a reference-quality audio and video presentation that actually makes the movie somewhat tolerable. With an exclusive collection of supplements, the high-def package is ultimately for fans only.

Sale Price 9.99
Buy Now
3rd Party 3
In Stock.
See what people are saying about this story or others
See Comments in Forum
Previous Next
Pre-Orders
Tomorrow's latest releases