Batman: Mask of the Phantasm

The early 90's saw DC Comics' Batman ascend to one of the character's many high points in terms of both popularity and available media. Something that began with Tim Burton's 1989 Batman live-action film was taken up in earnest in Batman: The Animated Series, which began in airing in 1992. That whirlwind of enthusiasm for Batman allowed for something special to be created in the terms of The Animated Series, but the combination of brilliant creative output and continued ambition for the property wasn't without missteps. The Animated Series was unsuccessfully pushed into primetime TV, and ultimately, after chasing a crossover audience, production was directed back towards a young, cartoon-hungry audience. The many successive shows that followed sometimes compared favorably with the early The Animated Series, but rarely have they managed to have anything like the lasting impact.

While The Animated Series was enjoying its first run, Warner Bros. Animation, along with the creative team of Bruce Timm, Eric Radomski and co., began work on a direct-to-video film meant to complement and continue the series. But before it finished, Batman: Mask of the Phantasm became a movie theater bound project. In effect, a 76 minute, moody episode of the the TV cartoon that audiences had been watching at home for over a year hit movie theaters on December 25, 1993. 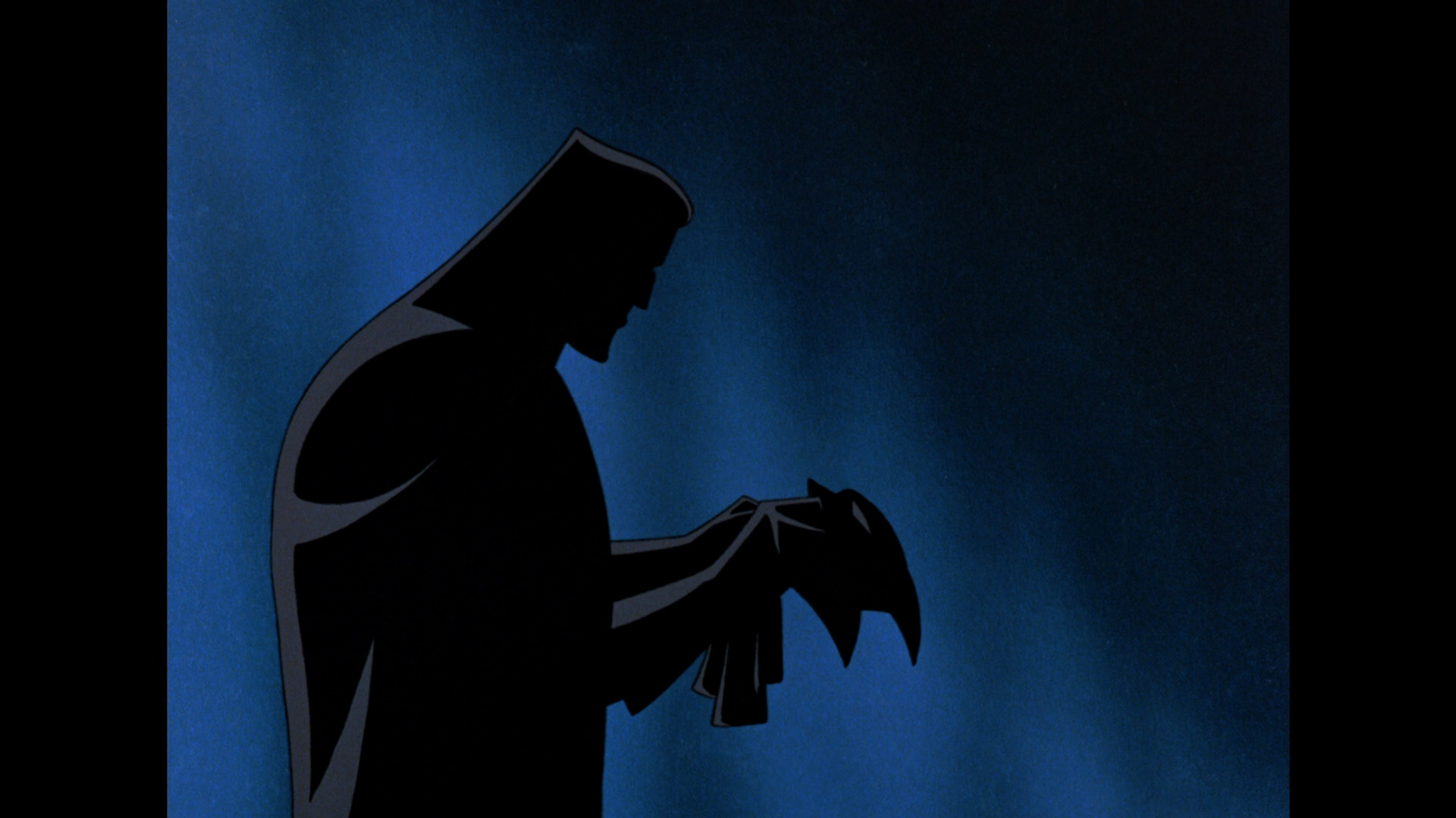 As a huge fan of Batman: The Animated Series, watching Batman: Mask of the Phantasm will always be enjoyable. Because of its hybrid 40's/90's setting, and because of the iconic impact of those character interpretations and creations, that world doesn't really age. As I get older, it's fun to pop in and hear Kevin Conroy and Mark Hamill fade into Batman and the Joker. The artwork is not only pleasing in its various designs, but the noir aesthetic is sublime. The extremes, such as the massive Batmobile are just as enjoyable as the simpler fare, like the shape of Batman's eyes.

Mask of the Phantasm begins with both the series' seminal music and with a Gotham that towers somewhere between NYC and Coruscant. Jumping right in with the dramatic credit sequence is very much like an overture, but the ensuing scene, which features mobsters, counterfeit money, and both title characters, does just as well at setting up the rest of the film. 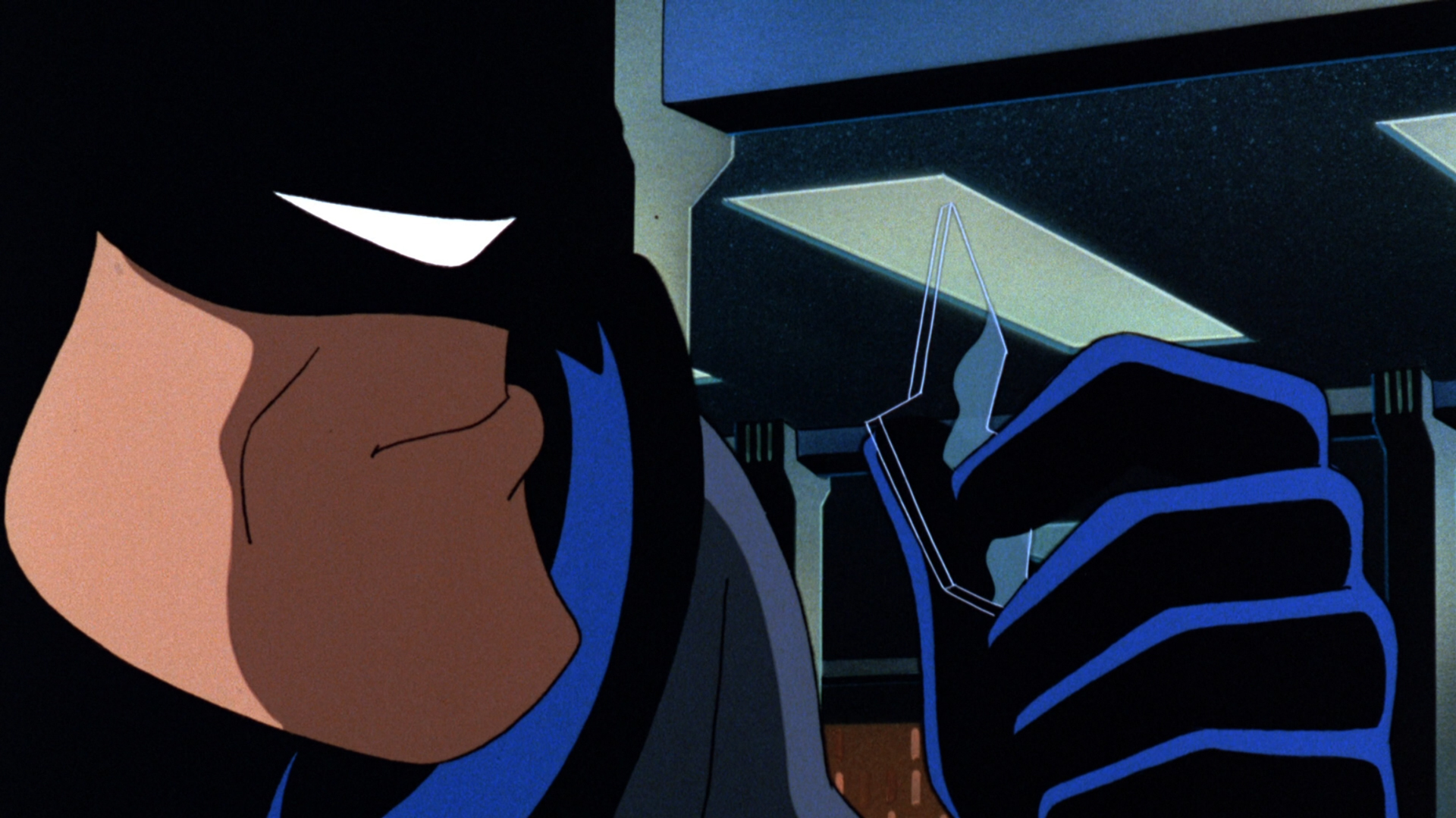 As a comic book character-related story, so much of what Mask of the Phantasm does well has been replicated in more recent works. For Batman, it's a mystery. He's trying to find the Phantasm, who, incidentally, while weighing heavily on the movie's title, is never referred to as such during the film. But the parallel story structure, with its flashbacks and character challenges, could easily be done as a story arc in the current Daredevil Netflix series. (Or any number of other places capable of telling a story more coherent than Suicide Squad.) Though always ready to start brawling, here, the world's greatest detective seems more interested in the mystery and even the forensics than say, chasing the assailant or even making a truce with a hostile and confused GPD. 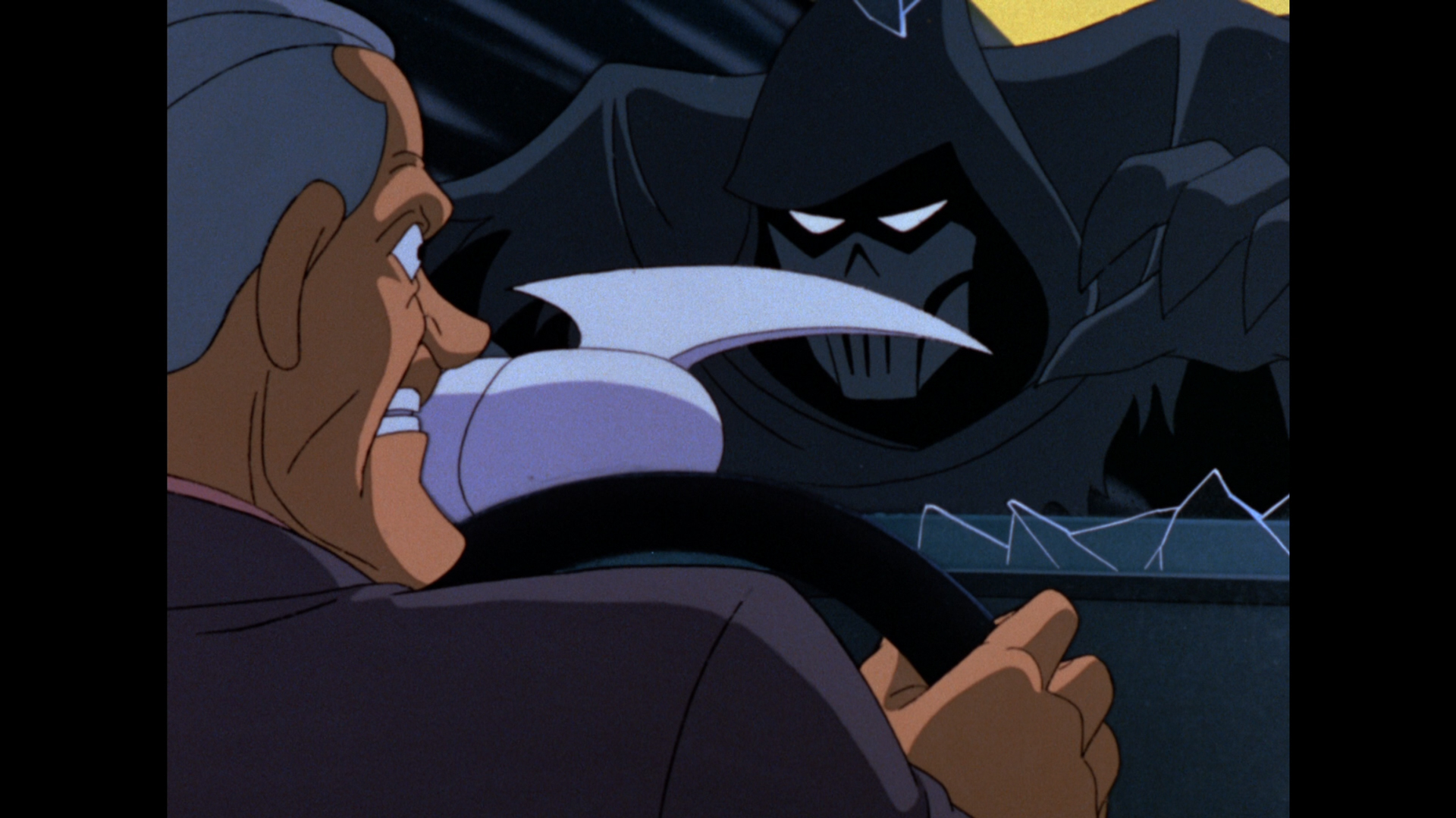 The movie's take on Batman's origin is enjoyable and even commendable. There's restraint in terms of his parents' death (at least visually), and instead, more time is spent seeing a younger Bruce Wayne grappling with his commitments. Sadly, with so many comic book characters, including Batman, having done a version of this many times over on screen in the 21st century, this part of the story requires a more academic sense of appreciation.

Even so, the movie is smartly focused. The Joker is involved in a major way, and while contemporaries like Alfred, Gordon, and Bullock have smaller parts, the movie feels no need to show or even hint at the rest of the Batman catalog. There is a funny nod to an inspiration for the Batmobile, but it feels comparably subtle. 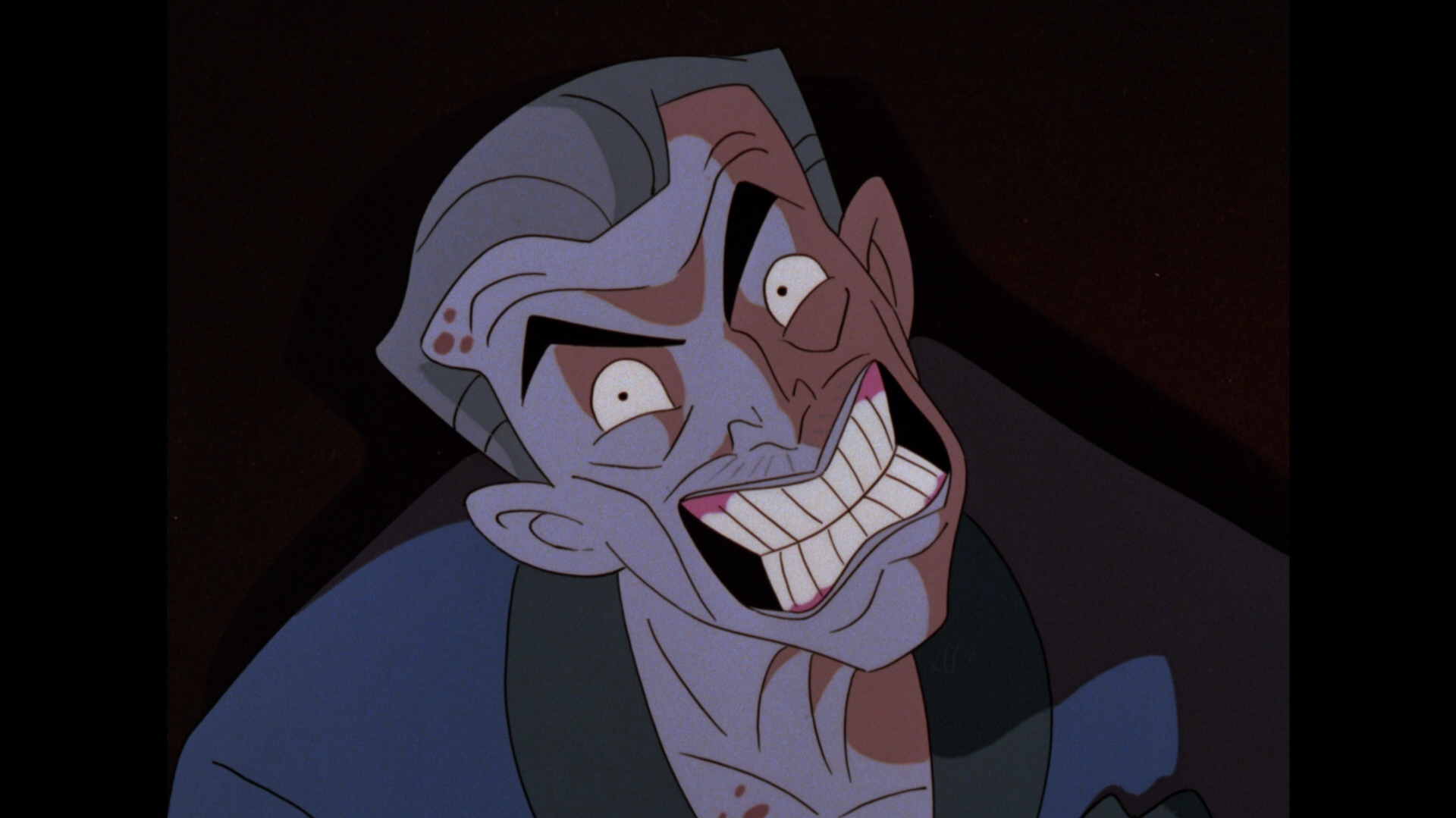 At 76 minutes, it's a short movie peppered with great action sequences and at times, witty dialog. Unfortunately, the flashback storyline and its somewhat weak conclusion hurt the film's pace, and at one point, the Joker appears to nearly steal the show. Still, the dramatic elements are strong and well-executed. It was never a movie for little ones, but it's that potent stylized noir that exudes throughout the movie that gives the film its enduring charm and sets it apart from so many animated Batman features.

It's been over 20 years since Batman: Mask of the Phantasm debuted, but what's worse, is that it's been almost 20 years since the movie was brought to DVD as a flipper disc. That pressing of the film, which I have treasured, I am quite happy to retire in favor of this Blu-ray version. 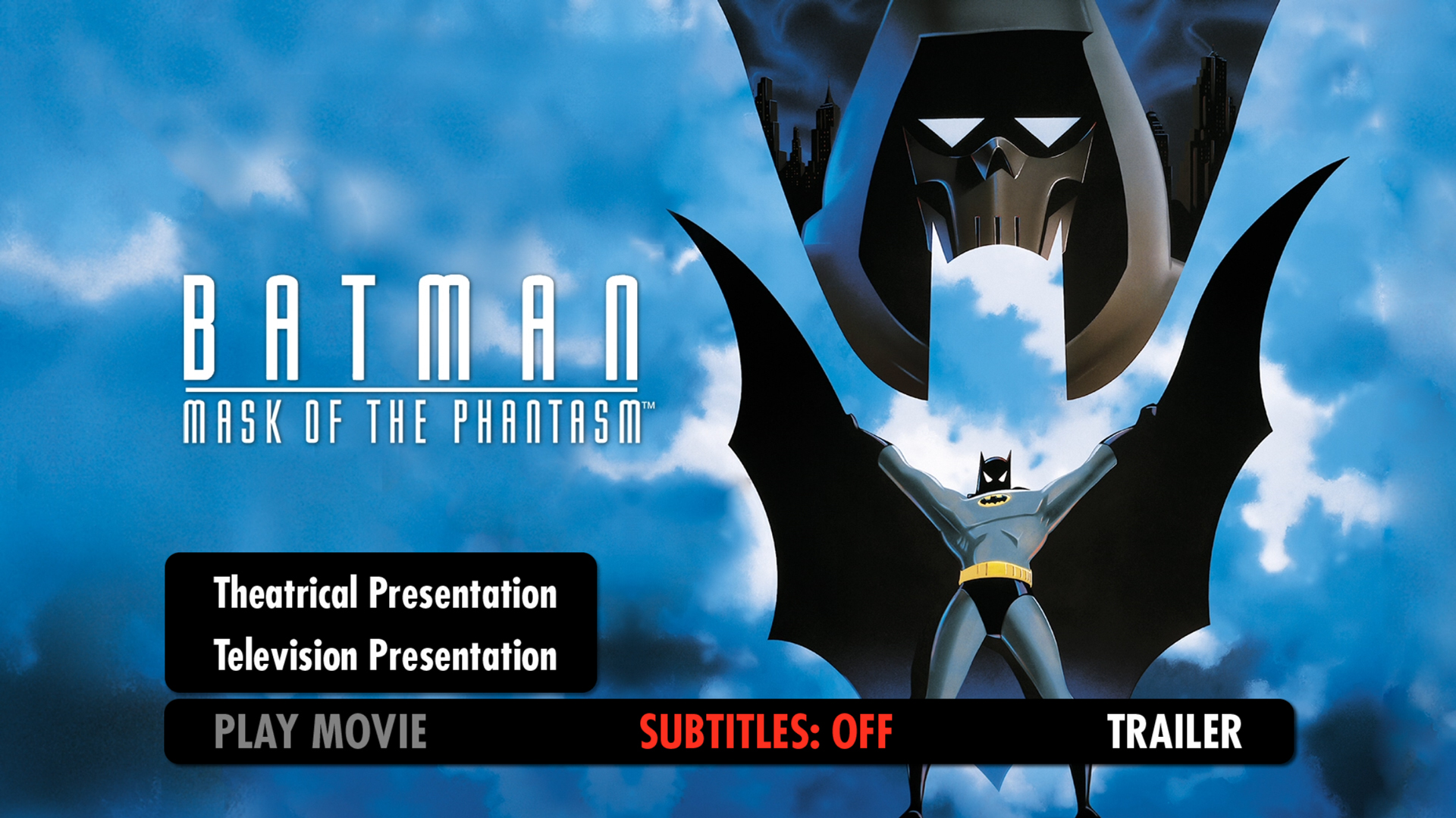 That is the good news. Warner Bros. brings Batman: Mask of the Phantasm to Blu-ray as a manufactured-on-demand single disc, and the overall package is skimpy. The film's cover art, disc art, and menu art are all the same still of the original movie poster design with the Phantasm's Mask floating above Batman on a cloudy/smokey background. The printing on the slipcase's backcover is sub par with the tiny text blurring to ineligibility.

Batman: Mask of the Phantasm comes to Blu-ray in 1080p with two different aspect ratios. Both the Theatrical 16x9 1.73:1 and Television 4x3 1.37.1 are selectable from the main menu, and there's even a brief screen of text that precedes the 4x3 version. This text explains how the animation was created for a then standard TV screen, but was then matted in preparation for a theatrical run. Both versions have their strengths. The theatrical version has the more dramatic framing, but the 4x3 version does show more of almost every frame. With the jump to Blu-ray, the extra fidelity of the 4x3 version is even more apparent than it was on DVD. Even so, both versions share transfer and source issues. 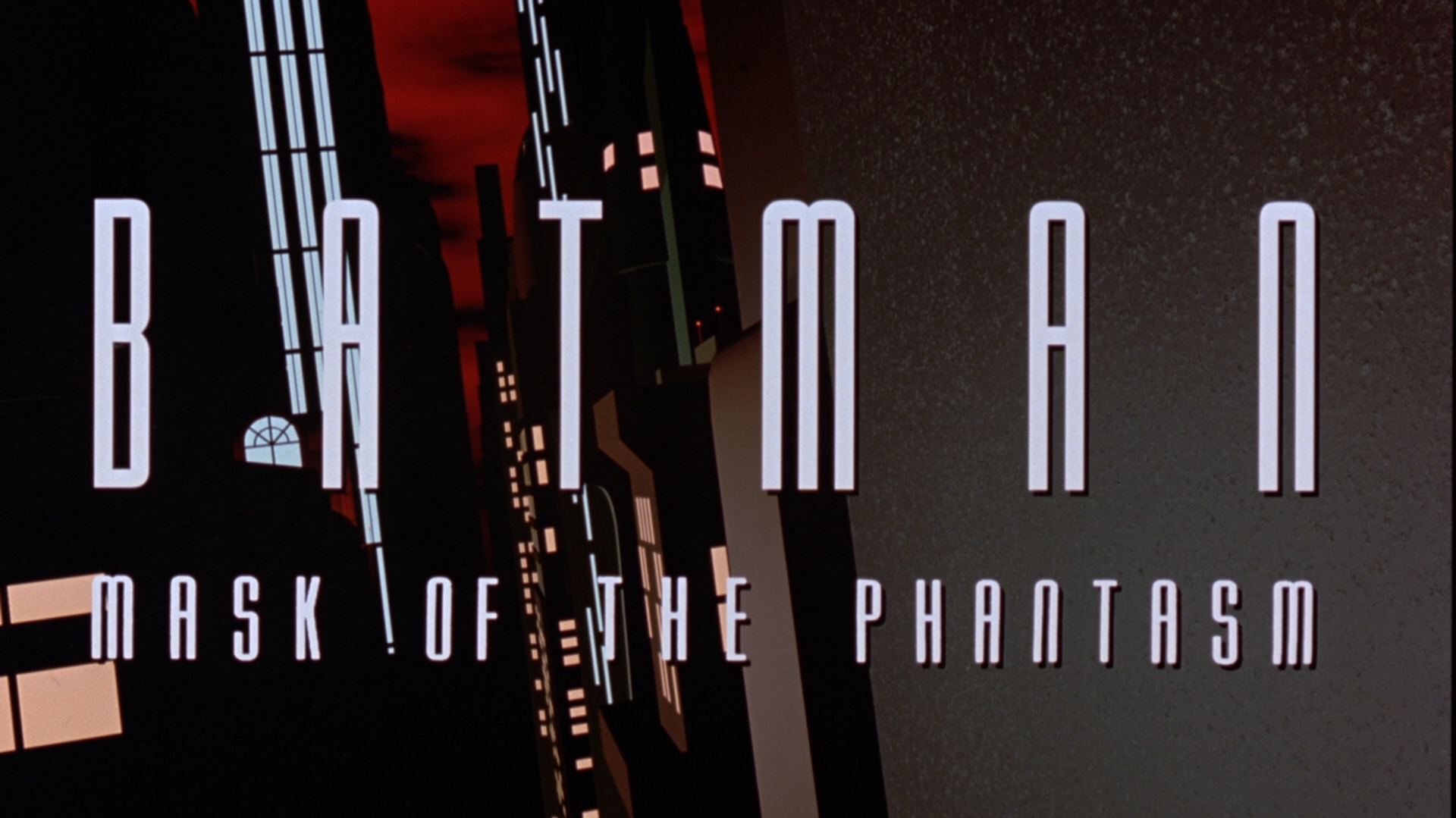 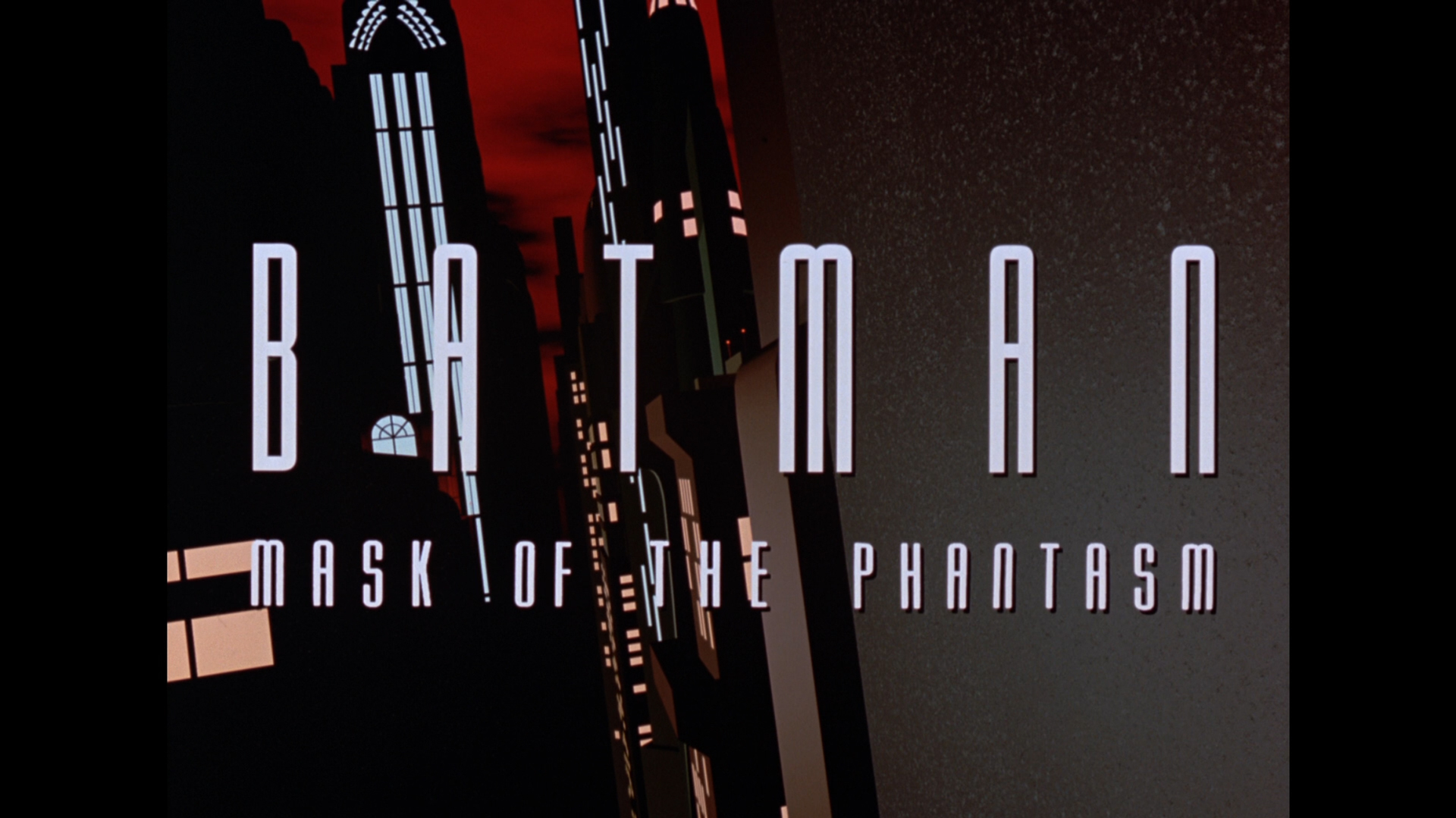 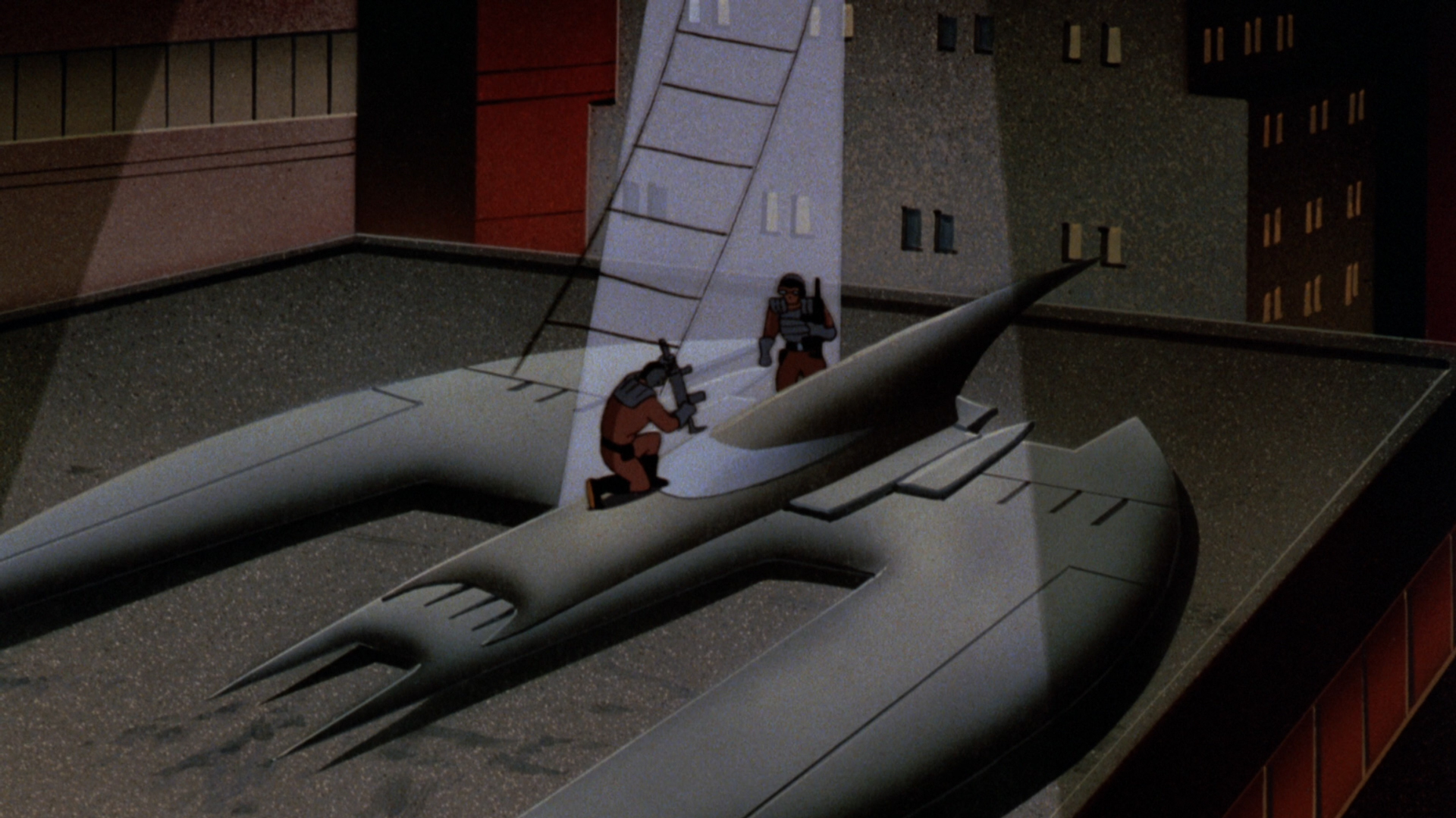 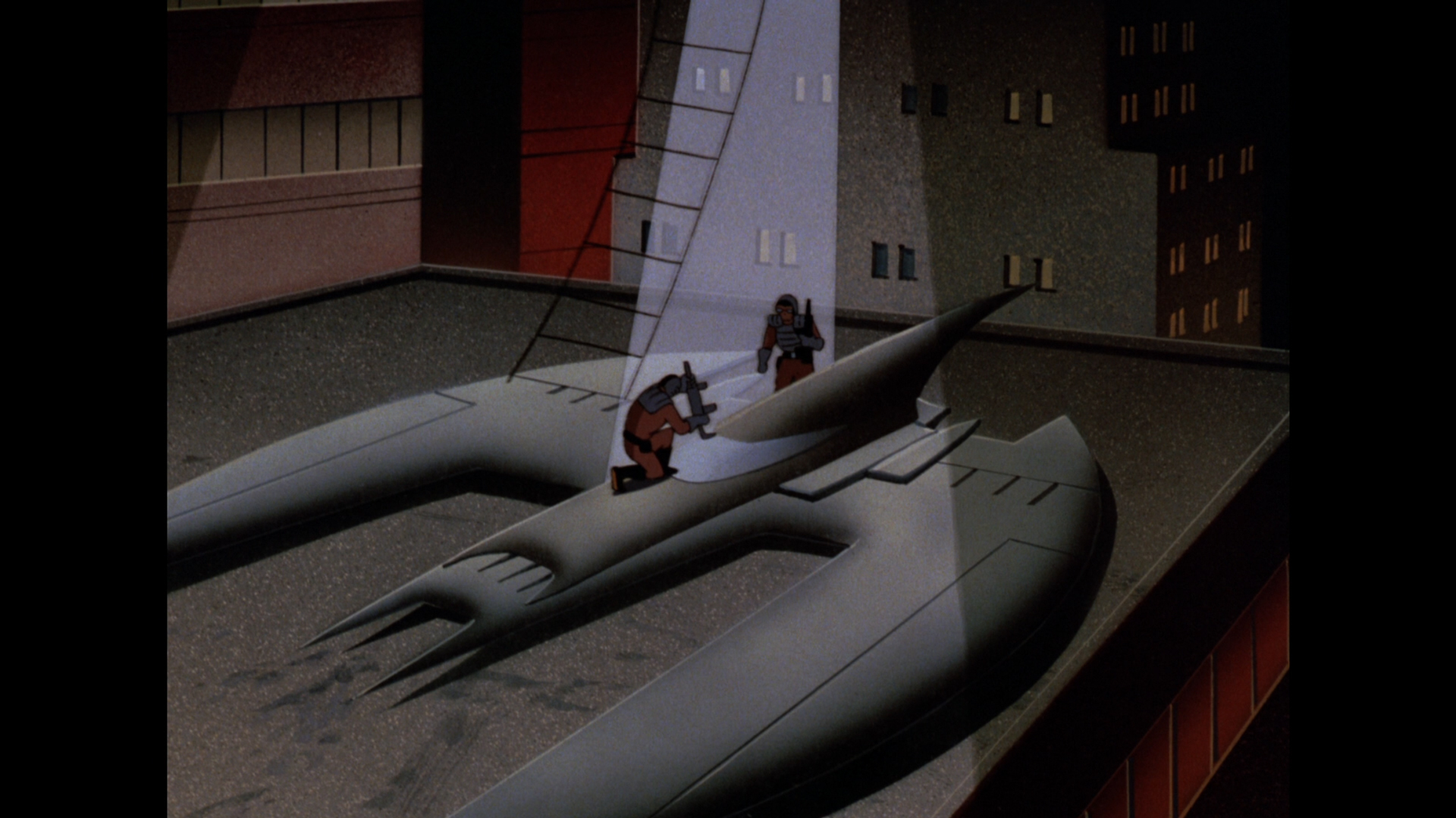 This disc is radically different from the DVD version. Though the overall Blu-ray seems sparse, there has been some careful work done on the transfer with tricky material. The characters are clear, though the animation of say, the party at the mansion does show some age. The opening credits reflect that some new noise has been introduced, but this is rare. What is worse is that there are several quick shots where character outlines and features are extremely soft, but in contrast, the natural noisy detail of the backgrounds, and even static shots of Batman (like staring down the police) is maintained. Overall it's a pleasing visual presentation. What should be very apparent is that along with the bump in resolution and cleaner image comes better color. 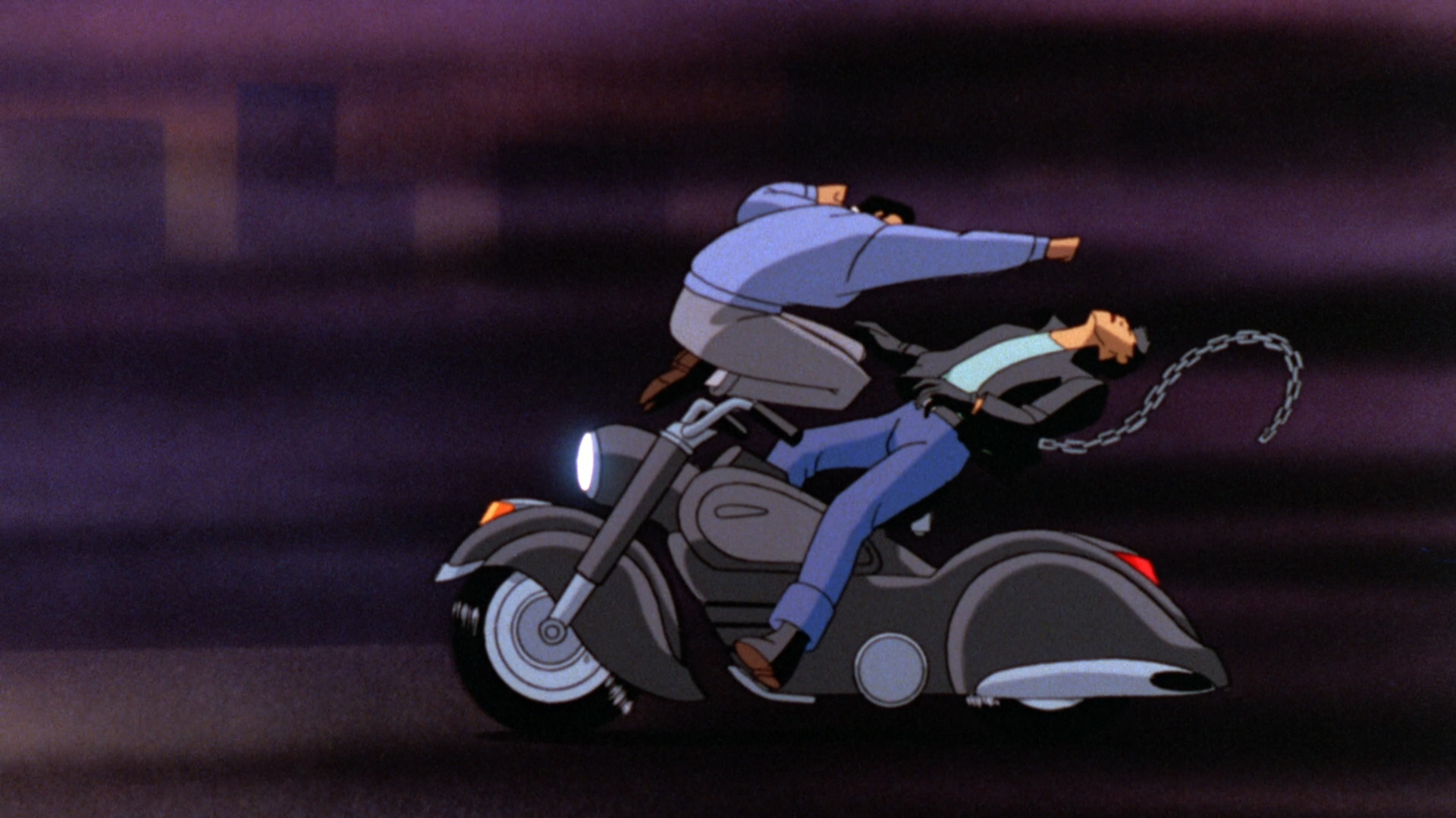 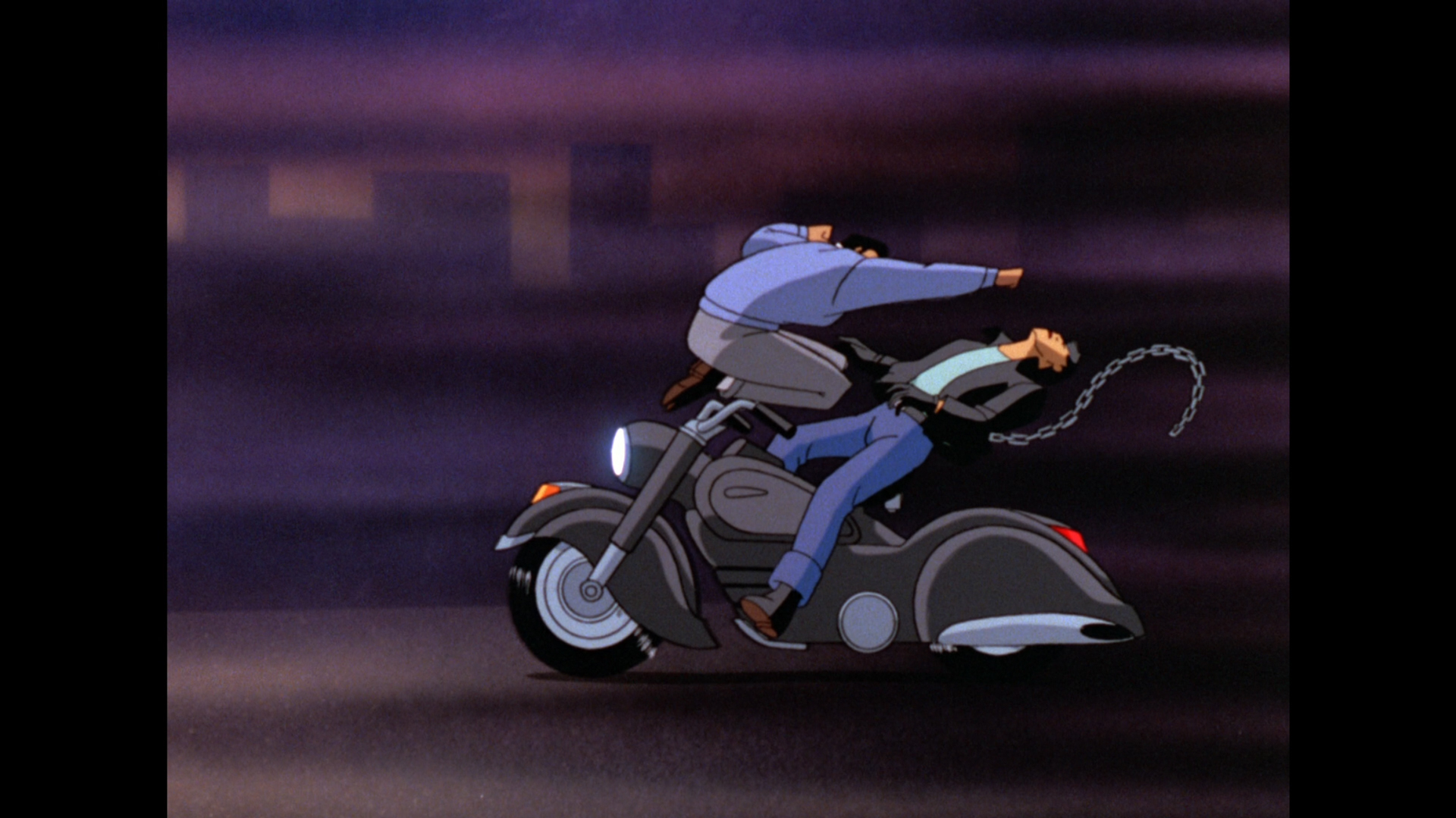 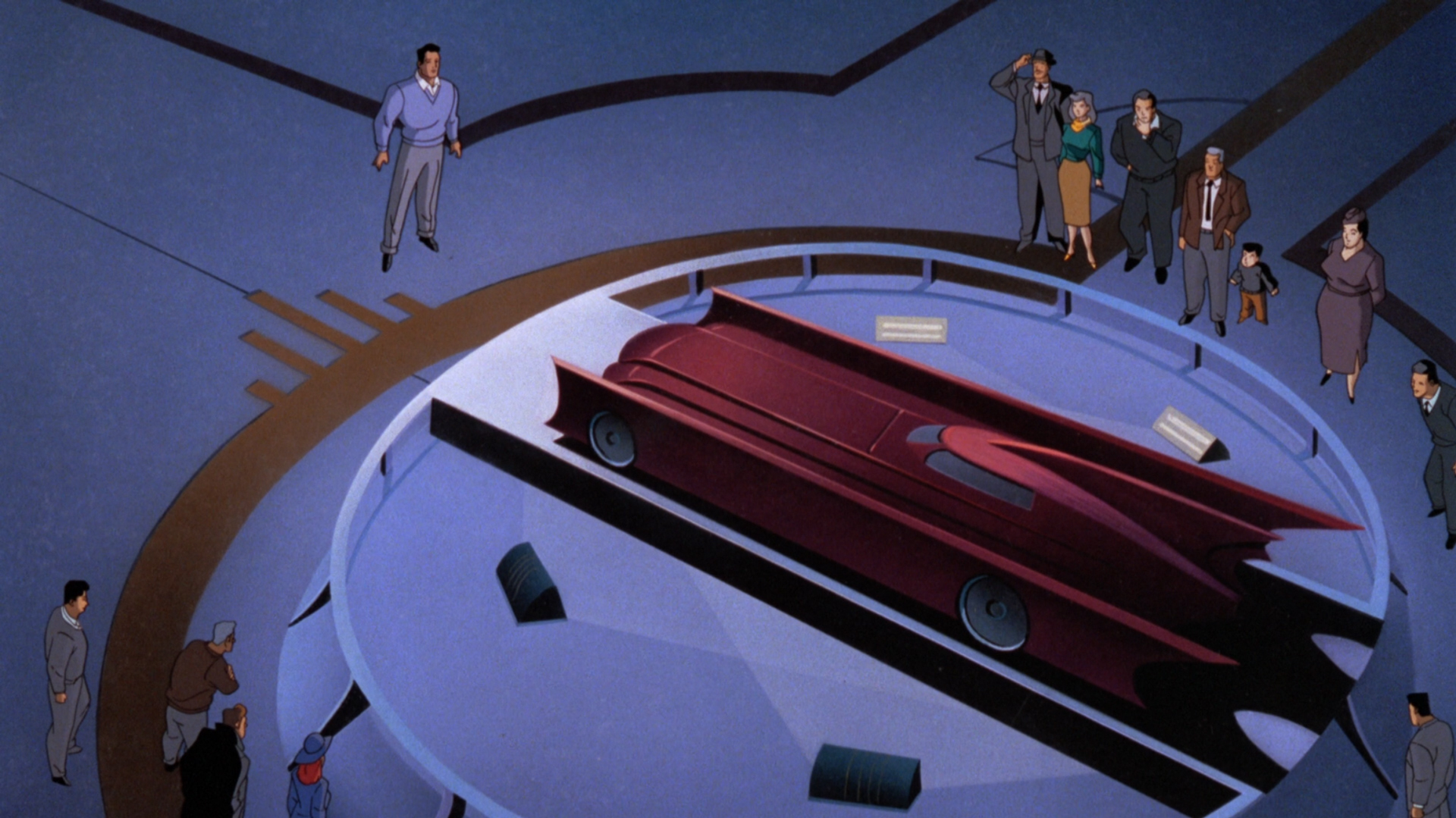 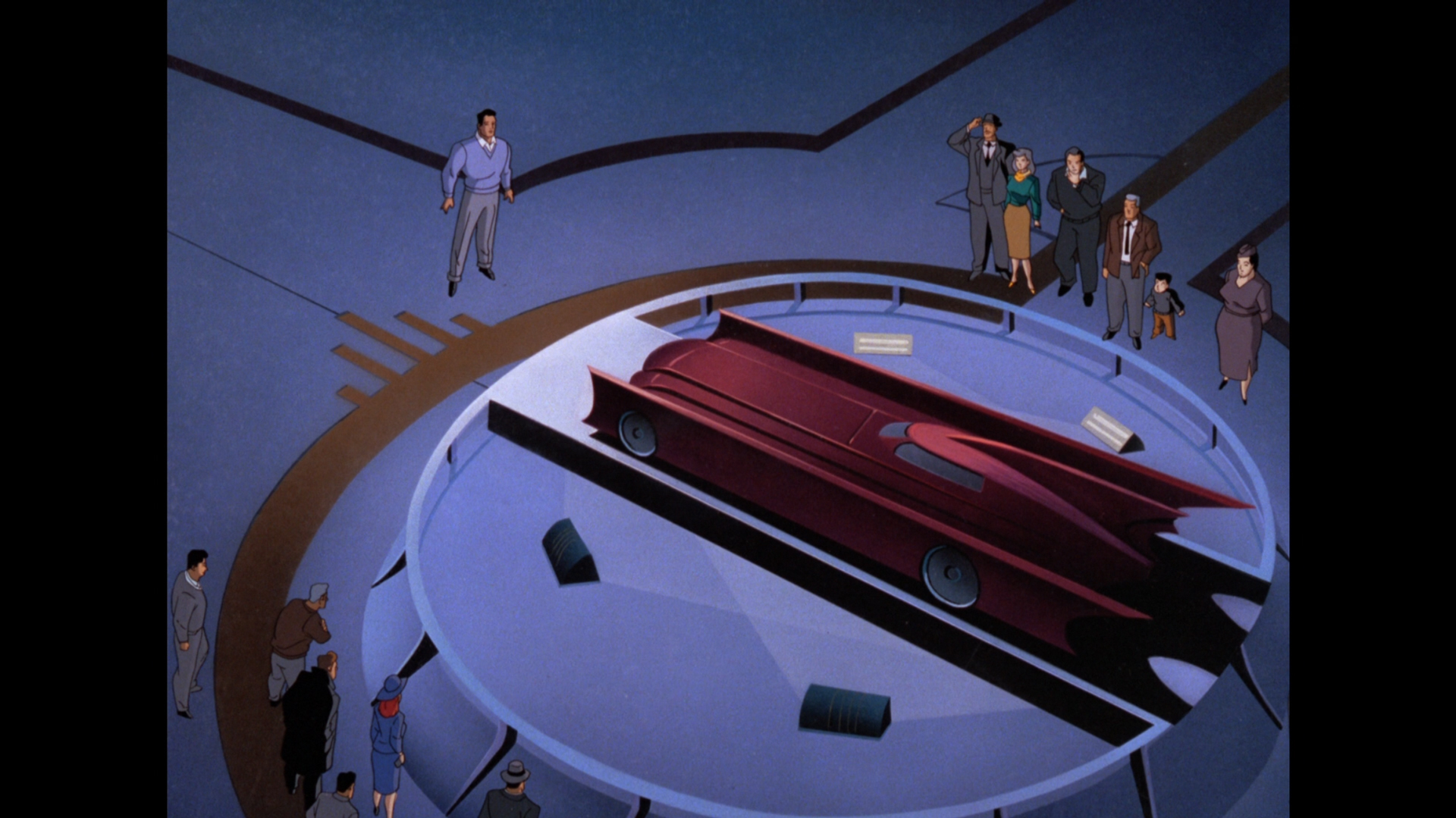 After looking for my favorite scenes and shots, it's obvious that nighttime in Gotham is where the dark, gothic style hits its zenith. The blacks are all-important and often fill the screen, but the city's color palette is full of reds and browns. The delineation found on the Blu-ray destroys the DVD, and stands as testament to why this film is a wonderful exhibition of the signature look of the The Animated Series.

A 2.0 DTS-HD Master Audio track is the lone audio option on the Blu-ray. Presumably the French Dolby track from the DVD (or the English one for that matter) couldn't be brought over without putting the barebones nature of this release in jeopardy. The score is wonderful, and the character voices are mostly clear, but that is helped by the quiet nature of most scenes. There are several key dialog exchanges that in a modern mix might be drowned out but are quite clear here. The voice-acting is often extremely good or at least, well-suited for the content.

In scenes like Batman's desperate scramble away from the police, the period style Foley of cop cars, chatter, and chain-link fences blends well with the operatic turns in the score. I had some hope for a 5.1 treatment, but this track is better than a bad 5.1 mix and it upmixes reasonably well. A very economic English subtitle set is included as an option.

The only supplement/bonus on the Blu-ray is a trailer. The trailer is pretty rough, but it is fun to see what the marketing was attempting. Having enjoyed many of the commentaries on the Batman: The Animated Series DVDs, I can't help but wish that Mask of the Phantasm had something, even a fan track. Thet text that precedes the 4x3 version serves as a slight tease.

Many years have passed since the serious Batman: Mask of the Phantasm brought the The Animated Series to the big screen, but there is more here on the Blu-ray to enjoy than a trip down memory lane. In spite of the bare bones trappings, this is Must Own for any serious Batman fan, Worth a Look for everyone else, which averages out to an overall Recommended scoring.

Sale Price 17.99
Buy Now
3rd Party 16.66
In Stock.
See what people are saying about this story or others
See Comments in Forum
Previous Next
Pre-Orders
Tomorrow's latest releases