Thought safely entombed deep beneath the desert, an ancient princess (Sofia Boutella, Star Trek Beyond, Kingsman: The Secret Service) whose destiny was unjustly taken from her is awakened in our current day. Her malevolence has grown over millennia and with it come terrors that defy human comprehension. From the sands of the Middle East through modern-day London, The Mummy balances wonder, thrills, and imagination.

In The Mummy, a reboot of the classic Universal Monsters franchise that spans several decades, the film opens with not one but two separate preludes: one with a burial ritual of a Templar knight and the other an exposition flashback with Russell Crowe doing his best British aristocrat voice-over. Before even going into the story proper, this first quarter of the movie immediately hints at the problems surrounding this installment to Universal Studios' first official attempt at creating a Dark Universe. Following in the footsteps of the current superhero craze, the filmmakers impatiently cram this fantasy-adventure horror feature with so many details of future projects, a rushed desire to establish their classic monsters cinematic universe, that there seems little room for characterization. Heck, audiences aren't even allowed a moment to simply enjoy the visual spectacle decorating all 110 minutes of a resurrected Egyptian princess, still fuming after thousands of years over a perceived betrayal, wreaking havoc upon modern-day London. The production hastily moves from one conversation and action set piece to the next in order to achieve its goal within an allotted runtime.

In truth, the film is not as bad as word of mouth would lead one to believe. But it's not that great either. It's basically a flawed production due to a larger endgame in mind, but it comes with plenty of admirable bits sprinkled throughout, starting with Tom Cruise's role as treasure-hunter Sgt. Nick Morton. Working under the guise of liberating rare and precious antiquities, the soldier is a smug and arrogant opportunist who fancies himself some kind of amateur archeologist and would probably call himself the real Indiana Jones if given the chance. The character was practically tailor-made for Cruise, a familiar big-screen personality he's best at. He falls right into the role like a comfortable pair of worn pajamas, virtually sleepwalking his way through the production while Crowe's Dr. Jekyll puts him on check, Annabelle Wallis's archeologist Jenny Halsey hits him in the manhood and Jake Johnson's Cpl. Chris Vail reminds him the price of his arrogance. Cruise plays Nick with his usual winning charm but is also allowed to be a bit of a clown. Many of those moments, however, come opposite Johnson's performance or Wallis's timing while Cruise simply reacts. 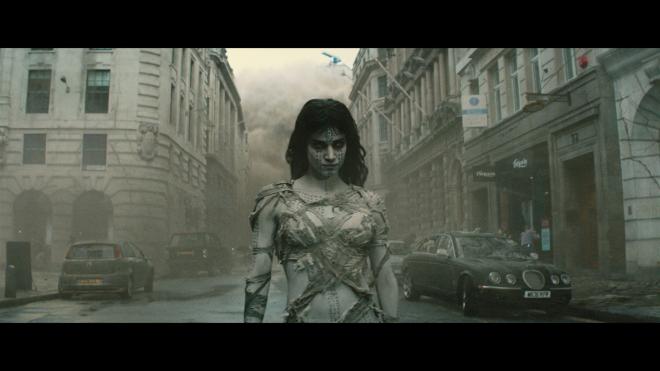 And so, much of the plot centers on Cruise's Nick, which is none surprising, and his confused ego wrestling with the fact that monsters exist and the damage he seems to inadvertently inflict upon the world, leading to an unexpected if also somewhat unsatisfying character arc. Unfortunately, with Cruise being the main attraction, the rest of the cast is essentially a troupe of dancing marionettes — flat, two-dimensional, easily-forgotten characters providing little more than dialogue details for moving the plot along. The brunt of the leg work is given to Wallis as the only person who actually comes off intelligent but rarely given the chance to demonstrate it. Instead, she serves as a potential love-interest and damsel-in-distress. At least Johnson delivers a few wisecracks as a phantasmal rotting corpse haunting Nick. Wallis struggles to create the tiniest spark when sharing screen time with Cruise. In fact, there's more chemistry between the A-list actor and Crowe, who enthusiastically chews up the scenery during his transformation into Mr. Hyde. Then again, that reveal was frankly a let down and ultimately felt more like a teaser.

Hidden somewhere deep in the secret caverns of The Mummy hides the potential for a good movie, but what's unearthed here is a lumbering corpse that fails to even meander towards something exciting, despite all the boundless CG visual effects wizardry at its disposal. Also, the filmmakers try to distinguish their reboot from their predecessors by featuring a female mummy in Princess Ahmanet (a scene-stealing Sofia Boutella), yet the character never really seems to pose much of a serious threat. She's just another game piece in a larger end goal, predictably meeting her match via a convenient happenstance rather than our heroes being smarter. Part of the problem is that Ahmanet spends most of her time as either a corpse grasshopping about, steadily strolling through the streets of London — a mysterious sandstorm at her command — or as a prisoner with mercury being pumped into her veins. Boutella isn't given a chance to be villainous and menacing. In this respect, her character shares something in common with the film: both are fantastical and visually intoxicating creatures but are ultimately an empty shell for something greater.

Universal Studios Home Entertainment brings The Mummy (2017) to Blu-ray as a two-disc combo pack with an UltraViolet Digital Copy code. Housed inside a blue, eco-elite keepcase with a glossy, lightly embossed slipcover, the Region Free, BD50 disc sits comfortably opposite a DVD-9 copy of the film. At startup, viewers can skip various trailers before being greeted by the standard menu screen with the usual options, full-motion clips and music playing in the background.

The adventure horror flick rises from its box-office disappointment grave to rule Blu-ray with a gorgeous, reference-quality 1080p/AVC MPEG-4 encode, showing stunning clarity and definition in every scene. Shot in a combination of traditional 35mm and digital cameras, the freshly-minted transfer exposes the most trivial features in the stage production, from the rough edges of stone carvings and the pockmarks of statues to the tiniest imperfections of Dr. Jekyll's gothic laboratory. In fact, viewers can plainly make out various items decorating the lab from a distance and the individual rivets in the metal beams remain distinct during the most fast-paced action sequences. The threading in the badges covering most of Sofia Boutella are not only continuously razor sharp, but even the tiny fibers of her scanty outfit are incredibly detailed during close-ups. Facial complexions also appear natural with excellent lifelike textures that reveal the most negligible blemish, scar and pore in the faces of the entire cast.

Presented in a 2.40:1 aspect ratio, the high-def video also wreaks havoc with spot-on contrast, delivering superbly clean, brilliant whites throughout. In spite of the teal-orange cinematography of Ben Seresin (World War Z, Pain & Gain), which interestingly still favors a darker, more atmospheric quality, the picture is fairly upbeat and energetic with excellent visibility in the far distance. The overall palette is noticeably affected by the stylish photography, largely limiting a good portion of the secondary hues to give the story a distinctive gothic mood. Nevertheless, colors are cleanly-rendered and accurate with primaries in particular looking vibrant and highly animated, making even the gloomiest parts of the film appear lively. Although there are a couple moments where brightness levels take a small dip in overall quality, blacks are quite impressive and often inky-rich with splendid gradational differences and detailing within the darkest shadows, providing the image with an appreciable dimensionality and a beautiful cinematic quality.

The Mummy attacks with a vengeance in this excellent and often highly-entertaining Dolby Atmos soundtrack, enlivening the room with lots of creepy sounds and action.

Brian Tyler's score immediately makes use of the object-based format by spreading evenly across the entire screen and into the surrounding speakers while lightly bleeding in the tops, creating a very engaging soundscape. The mid-range exhibits superb clarity and distinction in the upper frequencies, delivering a variety of noises that are clear and precise during the loudest segments while the music enjoys clean, full-bodied fidelity. Much of the action takes place in the fronts, carrying well-prioritized dialogue and flawless off-screen movement between the channels, creating a very spacious and broad soundstage. The low-end is powerful and responsive with the occasional wall-rattling bump, but only one scene stood out towards the end because the bass dug surprisingly deep and with impressive authority.

Although largely silent for good portions of the runtime, the surrounds are often employed with outstanding directionality and placement, especially when Ahmanet goes on a rampage. Debris flies into the overheads and showers down around the listening area, bullets zoom in various directions and the ricochet everywhere while echoing above, and the sounds of violent sandstorms blow across the ceiling and envelop the room. A particularly noteworthy moment was during the small Iraqi town when military helicopters hover overhead, filling the entire area with occasional movement from the top fronts to the top rears.

Audio Commentary: Director and producer Alex Kurtzman is joined by actors Sofia Boutella, Annabelle Wallis and Jake Johnson for a friendly and pretty enlightening chat about various aspects of the production. The commentary can also be found on the 4K Ultra HD disc.

Cruise & Kurtzman (HD, 21 min): A surprisingly engaging conversation between the actor and the director talking enthusiastically about the production.

Life in Zero-G (HD, 8 min): A look at making the crash scene and shooting in a Zero G airplane.

Meet Ahmanet (HD, 8 min): An interview with Sofia Boutella sharing her thoughts on the character.

Rooted in Reality (HD, 7 min): The filmmakers explain updating the classic monster for the 21st Century.

Cruise in Action (HD, 6 min): BTS footage of Cruise performing his own stunts.

Nick Morton: In Search of a Soul (HD, 6 min): Brief discussion on Cruise's character and performance.

Your Friend Is Alive

Sand in my Mouth

The Mummy, a reboot of the classic Universal Monsters franchise that spans several decades, is the first installment to Universal Studios' official attempt at creating a Dark Universe, following in the vein of the current superhero craze. Starring Tom Cruise, Russell Crowe and Sofia Boutella as the classic titular monster, the end result is a production lacking in characterization and horror, feeling impatiently crammed and rushed in order to quickly establish a classic monsters cinematic universe. On the bright side, the Blu-ray arrives with a gorgeous, reference-quality video and an excellent, highly-entertaining Dolby Atmos soundtrack. With a decent collection of supplements, the overall package is another good disc, bad flick that makes for a good rental before deciding on a purchase.