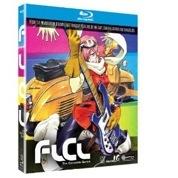 Possibly one of the biggest fan favorite series to be released on Blu-ray to this point, the six episode series 'FLCL' (Fooly Cooly/Furi Kuri) may very well be one of the most bizarre mainstream anime titles created, period. A creation of Gainax ('Evangelion') and Production I.G. ('Ghost in the Shell S.A.C.'), 'FLCL' defies genre classifications, logic, and the basic premise of having a plot. It's a haphazardly blended smattering of coming of age, oddball humor, and mecha themes, with a heavy musical influence that bleeds through to the pivotal events of the show. It's a show that can best be defined as insanity or brilliance, but more than likely a combination of the two, a madcap, oddball little series that still holds up as being amazingly original and, simply, extraordinary.

Naota Nandaba is just your ordinary kid, going through that rough stage where he's becoming who and what he is and will be. His room is half empty, as he doesn't want anything occupying the space where his brother lived, while he's away in the States playing baseball. His life isn't that special, living in a nearly out of business family bread store, with no real feminine figure in the house (his brother's delusional ex-girlfriend Mamimi hardly fills that role...especially since Naota's elders refuse to let her inside). Obviously, it won't be long until young, innocent Naota saves the world, falls in love, and has giant robots growing out of his head.

Haruko Haruhara changes everything in Naota's life the second she runs him down with her Vespa and clobbers him with her guitar. Now living with the oddball, borderline perverse Nandaba family, Haruko sets out to make Naota's life a living hell, as she's somehow behind the strange shit that's literally going on in Naota's head. The beautiful strange rocker, who claims to be an alien, has a mysterious past, yet it's due to her involvement that Naota continues to save the day, again and again.

No matter how much longer I talk about the synopsis or recap of this show, not only will it still not make a lick of sense, it cannot even possibly scrape the surface. This hilarious anime series defies all conventions, and is about as unpredictable as any series ever made, regardless of country of origin, simply because it dares to be bizarre, to refuse to tie up its loose ends in a neat little package. It's heartwarming, yet disturbing. Hilarious, yet at times, dead serious. It's a family drama one minute, and then a sports series, mecha, and disaster movie the next, with some of the most peculiar twists in the road ever recorded.

Need an example or two? How about the fact that it looks like the robots Naota sprouts actually eat him when he becomes a part of them, only to be excreted when the battle is over? Or Haruko playing the part of Quick Draw McGraw's El Kabong alter ego? What about the fact that the first robot to sprout from Naota's noggin becomes a member of the household, and has a preference for Hustler magazine? Or that Mamimi, out of nowhere, proves to be a serial arsonist? What about the fact that some humans get replaced by weird, somewhat kinky cyborgs?

'FLCL' may be perturbed, but it's still a sweet story and a fantastic adventure. The characters are very realistic, you know, all things considered. Naota is the typical reluctant hero boy, but he's very accessible. He's seemingly shy, yet he comes out of his shell thanks to the almost sisterly presence of Haruko. He's easily embarrassed, and the fact he has to hold his head with bandages or hats so that random creatures don't sprout through only adds to his tension-filled life. Amarao, a special agent seemingly out to stop Haruko, shares a similar history, making his character far more than just a typical narc, having gone through the same kind of insanity. Class president Ninamori is also a very intriguing character, who seems like a viable match to Naota, particularly with her family strife and pressure, and even shares Naota's robot-spawning condition after touching one of his growths. Both of the youths pretend to be so much more mature than they really are, making their inevitable breakdowns another shared trait.

While 'FLCL' may be a hard show to follow, it does have its rewards. Repeat viewings are a must, and replay value is startlingly high, as the humor doesn't get old, and the characters make much more sense the second time around. Asian cinema fans will adore the John Woo parody and homage sequences, where suddenly everyone and their mother is shooting at each other, and familiar scenes from his flicks are teased. Hell, even 'South Park' is ripped on at one point. This show doesn't have any limits, no boundaries, just the desire to break free from the mold and refuse to be typecast. It's both touching and hilarious, and gets rolling early in the first episode, with no time to waste on drawn out character development sequences. Both mature and ridiculously childish, there's something for almost everyone in 'FLCL,' including plenty of themes aimed at female audiences, making this a difficult anime to start with, but definitely a treat for the devoted fans.

All six episodes of 'FLCL' are contained on a single BD50 Dual Layer disc, which is marked Region A. There is one pre-menu trailer (for the upcoming American release of 'Evangelion 2.22: You Can (Not) Advance'), which is both skippable and classy. The menu is not static, but it's hardly immersive, just a scribble of the series name, with a nice little audio loop to go with it. As always on FUNimation releases, sub-menus on the main menu have to be closed by pressing the x tab on each drop down. 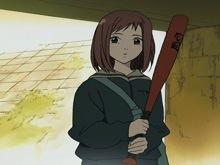 I do not doubt, at all, that this Blu-ray release may very well be the best 'FLCL' has looked. It's a dated show, already, and it is transfered from SD sources, upscaled, if you would. I also won't say that this is a "bad" upscale. That seems ridiculous. Rather, I think there are a few other reasons as to why this release earned the score I'm giving it, and I don't think content overload on a single disc is one of those problems, as the three audio tracks (two lossless stereo mixes and a commentary) shouldn't take up that much space compared to a single lossless 5.1 version, and the extras aren't all that lengthy.

FUNimation's 1080p AVC MPEG-4 encode in the show's natural 1.33:1 ratio has as many, if not more, distracting moments than there are ones that seem fine, and the key component is movement. Lines waver like you wouldn't believe on this release. A simple pan can turn the entire picture into a very slight strobe, with lines that can pulse, or move like an animated ocean wave, rippling through an outline, making sure it doesn't stay solid. Some moments even look like the film is seen through extreme heat, like a motorcycle's exhaust or an intense fire, creating a wobble.

But that's not all. Some random thick halos, hefty banding, obvious artifacts (including ones that make skin tones go purple), and extreme stairsteps compound the issue at random. If that weren't enough, there are some random very blurred splotches that make it seem as though some DNR was employed at some point to try to fix a few problem spots. The manga panel sequence in the first episode, as awesome as it is, has an effect similar to a moire, when it's merely a pan on a dot gradient. It's seriously bizarre.

Still, I doubt there has been a home video release of this show that looks any better. Colors can be stunning, a few flares are breathtaking, and there is a nice obvious bump in finer, smaller details. I will not lie and say this release looks amazing. It doesn't. In fact, it's really not pretty at all, but in all fairness, it never was, and it never will be. Sometimes good enough simply is as good as it will get. 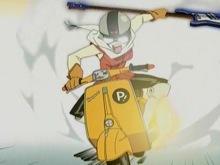 With dual Dolby TrueHD 2.0 tracks, 'FLCL' doesn't quite stun in the audio department, either, but it's not all that bad. The main problem is the lack of power. We have some serious carnage on display, some very heavy rock here and there, yet there's no bass, no pop, no roar. Dialogue and soundtrack elements blend fairly well, though there are a few moments where words get a little drowned out. Separation is average at best, and there are a few bits of crackling (but due to the fact they're all located in a five minute span mid-way into the series, one could call them a part of an episode. I didn't get that feeling, personally), and a few bits of high pitched feedback. What's startling is how high I had to crank my receiver for this show to still not be all that loud, and still incredibly withdrawn. I literally did the ol 'Spinal Tap' turn it up to 11, and put the volume at levels I never had before, and still never got a loud response. Very bizarre. 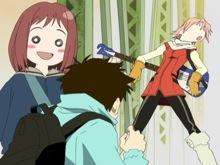 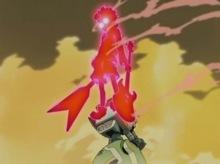 'FLCL' is a fan favorite for a reason. Bizarre and humorous, yet relevant and intelligent rarely mesh this well. It's a giant mind#$&% of a series, to be sure, and it definitely ends before it would have run out of steam, leaving those of us who are truly into it in the dark way too fast. FUNimation's Blu-ray release of 'Fooly Cooly' will always be a bit controversial, but anyone who has seen this series before will be happy with the upgrade. Just don't go in expecting 'Evangelion'-like results. It will never, ever happen.

Sale Price 57.03
Buy Now
3rd Party 64.95
In Stock.
See what people are saying about this story or others
See Comments in Forum
Previous Next
Pre-Orders
Tomorrow's latest releases