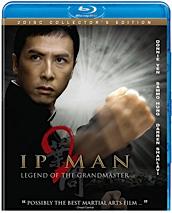 'Ip Man' was a fantastic period film, a statement of the will of man for what is right and just, considered the best film about the legendary martial arts expert also known as Yip Man and Yip Kai-Man. The acting was superb, the fight direction and choreography splendid and enticing, and the story was phenomenal, to boot. Two years after the first, a sequel was spawned, with the principle cast returning, continuing the tale that was obviously not finished.

Opening with a brief recap of the previous film, ending with Ip Man's escape, as he lay wounded, 'Ip Man 2' throws us headfirst into a whirlwind of near-non-stop action. Located in Hong Kong in 1950, the sequel shows the struggles of the Wing Chun master as he tries to get a school (and students to fill it) to prosper, while facing financial uncertainty at every turn. Every up has a corresponding down, and soon the calm master must prove his worth to the other masters of the area for acceptance. His integrity and pride never wavering, Ip Man is soon thrust in the spotlight again, as another foreign force wants to prove dominance over his fellow people, leading to a climactic showdown that will prove the determination and strength of the Eastern people.

I won't lie, I was absolutely giddy when I saw the cast for 'Ip Man 2.' With Donnie Yen returning in the titular role, and Simon Yam again appearing, although in a diminished, dramatic fashion, a new character is a scene stealer at every turn, as Sammo Hung plays Master Hong Zhen Nan, a combative Hung Kuen master whose political pull and army of disciples far exceed that of Ip Man. That's right, though. All three of the leads from 'Kill Zone' are together again in the same film, this being only the second time Hung and Yen face off. That alone is enough reason to give this film a look see, but there's even more! Darren Shahlavi, who plays Kano in the new 'Mortal Kombat' series, plays a British boxer named Taylor "The Twister" Milos, a brutal man and near unstoppable force.

There are many similarities between the two 'Ip Man' films starring Yen, with the character not changing one iota, being the rational, apt, powerful man who is constantly underestimated by those who don't know him, and respected to the nth degree by those who do. Again, the master finds himself living under the rule of another country, as Hong Kong is under British colonial rule, and again, the prides of two people will face off to determine who is the greatest in the land, in a bout that may not be as evenly governed as it appears. Even the ending is damn near identical, as the pre-credits tease once again focuses on a certain legendary martial artist to be trained by Ip Man.

'Ip Man 2' doesn't focus as much on family the second time out, despite having a pregnant wife, and this time, the defenseless commoners are not a part of the plight that drives the confrontation. Instead, we see a focus on the attempts to build a school, a following, in a film that can readily be divided into three parts: the struggles to establish oneself, the Wing Chun vs Hung Kuen showdown, then the Chinese, united, taking on a new foe, as fighting styles clash yet again in the same film. It's a bit much, a tad too repetitive, to see one showdown after another to prove dominance be the only driving force behind the plot. Corruption again plays a hand, but it's minimized to the point that it's hardly a subplot.

'Ip Man 2' doesn't have the scope, or the drama, to compete with the original as a fully realized film. That said, this film, loaded so close to the brim with extravagant action sequences, is so different that it's hard to compare it, fairly, to 'Ip Man.' Yes, the human element is removed, but nine times out of ten, I'd gladly trade that to get to see Hung and Yen beat the holy hell out of each other. There are some fantastic fight sequences within very close quarters to each other as the film rolls on, all with different themes and moves. I can't praise the table fight enough, as that masterwork of wires and ass-kicking has to be seen to be believed. The "boxing" matches are also very well made, and give a different atmosphere to the film, a different sort of awesome.

'Ip Man 2' is an enjoyable film, for what it is, though it should not be seen without having experienced the original first. Yes, it stands on its own quite nicely, and is not dependent on the events of the original, by any means, although there are a few subtle nods that fans will catch if they pay attention. Still, the family characters, as well as Yam's appearance, only make sense having seen 'Ip Man,' and the massive contrast in fight choreography through the entire series has to be seen to be believed.

'Ip Man 2' comes to Blu-ray from Well Go USA in two different editions, a one disc standalone, and a two disc collector's edition, which is what is being reviewed here. The movie disc is a Region A marked BD50, while the extras are on a DVD disc, which is the same way the collector's edition of 'Ip Man' was packaged. This edition also sports an attractive embossed slipcover. 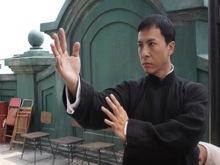 Sure, there's light noise issues, including some weird accumulations around outlines in a couple scenes, and some other glowing outlines, but detail levels are much more consistent, and grain isn't anywhere near as peculiar as it was in the first, where it would splotch, freeze, shift, and smear. Skin tones are inconsistent, with random orange and yellow splotchiness that can be overwhelming in some sequences. Both depth and textures are hit or miss, but when they're on, the film looks absolutely incredible and vivid.

While far from perfect, this presentation is definitely worth the upgrade. 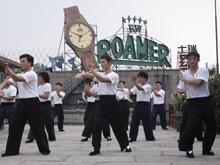 Goodness gracious! 'Ip Man 2' comes with three flavors of DTS-HD Master Audio 5.1: an English dub, and then Mandarin and Cantonese tracks. This review will focus on the default Cantonese, a mix that is not bad by any means!

Bass levels are powerful underfoot, accenting some scenes, and throbbing in others, with great damn-near constant activity, particularly underneath fight sequences. Dynamics are great, localized effects aren't frequent but are placed properly, and ambience is appreciable, although very light. Rears mostly get score use, and it's at a perfect volume compared to the rest of the speakers, pulling you in. There is a weird spot in the track at 15:51, that isn't a drop out, but sounds strikingly close to one due to the weird transition in the audio and cuts between shots.

This one isn't Earth-rattlingly amazing, but for the film, it's quite appropriate. 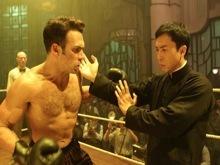 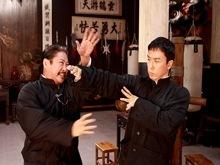 'Ip Man 2' isn't quite as powerful as the original 'Ip Man,' but it ventures in its own direction appropriately, and creates a different experience, which is far more than I was anticipating going into the flick. Yen and Hung are splendid on screen together or separate, and the martial arts action here is as memorable as the awesomeness found in the first flick. The Blu-ray for the sequel is superior to the original, which wasn't all that great. Check this one out, folks. Timeless action flicks don't show up every day.

Sale Price 16.4
Buy Now
3rd Party 24.99
In Stock.
See what people are saying about this story or others
See Comments in Forum
Previous Next
Pre-Orders
Tomorrow's latest releases