Overview - In his notorious masterpiece The Great Dictator, Charlie Chaplin (City Lights, Modern Times) offers both a cutting caricature of Adolf Hitler and a sly tweaking of his own comic persona. Chaplin (in his first pure talkie) brings his sublime physicality to two roles: the cruel yet clownish “Tomanian” dictator and the kindly Jewish barber who is mistaken for him. Featuring Jack Oakie (Thieves’ Highway, Lover Come Back) and Paulette Goddard (Modern Times, The Women) in stellar supporting turns, The Great Dictator, boldly going after the fascist leader before the U.S.’s official entry into World War II, is an audacious amalgam of politics and slapstick that culminates in Chaplin’s famously impassioned plea for tolerance.
OVERALL
Highly Recommended

I hate to Godwin my own review for Charlie Chaplin's 'The Great Dictator' in the first sentence, but do you know who else had a block mustache?

The history of 'The Great Dictator' may be as entertaining and complex as any film's can be, though it isn't production snags or script rewrites that are the amusing aspect of the story. Rather, the coincidences and parallels between Chaplin and Adolph Hitler are some of the most bizarre bits of trivia out there. Written and filmed before the real atrocities of World War II were brought to light, Chaplin's take on the dictator in his very first talky is memorable for all the right reasons, with a silent star taking aim at a man whose orations brought him great power. In a time before comedy about the most infamous leader in world history was taboo or in poor taste, the world's most famous man entered the political fray with his opinions on the value of life, freedom, and liberty, at the risk of alienating his already waning fan base. War was breaking out all around the world, bit by bit, and one man wanted to mock the man partially responsible.

There is no complexity in the plot to 'The Great Dictator,' as Chaplin weaves an all too familiar tale with his take on the Chancellor, playing two polar opposite roles. In one hand, Chaplin was a Tramp-ish fellow, a man of few words, a bumbling barber in the Jewish ghettos of Germany, a former soldier whose medical care and experiences leave him a stranger in the new political climate. On the other hand, Chaplin is the Phooey of Tomania, Adenoid Hynkel, the man who stands behind the double cross proudly inked or stitched into everything in sight, a man whose lust for power and global domination plays second to no other thoughts or desires. As the unnamed barber character struggles with his friends, constantly being oppressed and attacked by stormtroopers, his perfect duplicate is furthering the propaganda against the Jews and plotting whom to invade next, alongside his trusty aids Herring and Garbitsch (Billy Gilbert and Henry Daniell, respectively, playing two very familiar faces to war followers), while awaiting the arrival of the Dictator of Bacteria, Napaloni (Jack Oakie, clearly playing the part of Mussolini with a hint of Napoleon, hence the wordplay).

From the opening scenes of 'The Great Dictator' to its close, greatness can be found around every corner. The late-World War I opening, featuring the greatest cannon in the world, Big Bertha, as well as some flight gags that are beyond stupendous, may very well be the most slapstick-y the film gets, but with the arrival of the late '30's, the tone changes dramatically. Instead of slapstick, irony and sight gags take the lead, with Chaplin doing the best German gibberish in history as he mocks Hitler's infamously powerful speeches to great applause. The barber story maintains the status quo of classic Chaplin gags and familiarities with new twists, though, to keep an odd two flavored sense of humor that keeps viewers guessing as to what's coming next, rather than setting up gag after gag after gag. The fantastic use of long cuts remains, with numerous scenes feeling borderline Rube Goldberg-ian in their intricacy and precision, including a stunning barbering sequence, where Chaplin synchs himself and his movements poetically to Brahms' Hungarian Dance No. 5, in one of the signature scenes of the film, a gag that modern actors seem incapable of performing in such lengthy precision.

'The Great Dictator' is a comedy, yes, but it's also one of the best films at portraying the Jewish plight of the era, with fully realized, human characters and families banding together for more reason than their religion, leaving a number of powerful sequences, both of rebellion, the testament of the human spirit, and of loss and suffering. Sure, one can readily call the "coin in the pudding" scene the stick in the cogs of my statement, but even it shows men unwilling to give up and die, even if it means deceit (with great comedic result). With a man like Hynkel in charge, with his unending swarm of soldiers to do his bidding, it's hard to not feel for the conditions portrayed here, sequences that ended up being about as truthful as any other in the film, intentional or not, which sadly only skimmed the surface of the depths of the atrocities being committed in reality, acts that would have seen Chaplin not make the film had he been aware of them.

Seventy plus years after its release, 'The Great Dictator' remains powerful, incredibly acted, and, quite frankly, hilarious, for all the right reasons. There are no low blows, but rather attempts to remove the legs of a man whose power was grandiose and unchecked. The film almost seems like Chaplin's attempt to remind the world that he is nothing like the man whose appearance and rise to fame mirrored his own. One of the greats of cinema, the first time a voice was associated to the familiar character Chaplin embodied, this film is as relevant today as it was in 1940, even if the settings have changed, and damn if Chaplin isn't going to sit us all down by the end and remind us of it. Yes, the film has tone issues, and may run a bit too long for its own good, occasionally dragging along unnecessary sequences both good and bad, but it's still a true pleasure to behold. 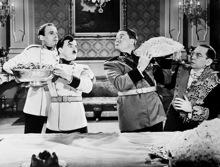 Criterion works wonders with 'The Great Dictator,' bringing the 71 year old film to new life with their extensive restoration, resulting in a 1080p/AVC MPEG-4 encode in the natural 1.33:1 frame.

The picture is remarkably clean, with debris minimized so dramatically, yet naturally, that the film retains the appearance of age, without looking horribly overridden by wear. The few vertical lines remaining in the picture are faint, hardly noticeable, while dirt speckles and scratches politely blend in with the backgrounds, when they weren't removed entirely. The amount of detail on display is fantastic and doesn't, for the most part, waver, with only a few random soft, blurry shots mixed in the two plus hour runtime. Aliasing never presents an issue, not even in the varying pans in the globe sequence, though there are two sequences in the film where a sudden burst of obviously cleaned up debris will splatter the film and look somewhat odd for a quick, couple second duration. Artifacting and banding never show their ugly faces, and DNR use, one of the many tools Criterion employs in these cleanup jobs, doesn't ever get distracting or obvious.

A fantastic job was done on this release by Criterion in making this the best the film will have looked in, no doubt, 70 years. Chaplin fans, leap on this as soon as you can. 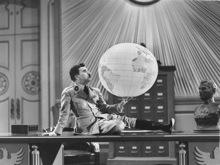 The audio on 'The Great Dictator' is no slouch, either, with a Linear PCM 1.0 track providing the sole audio option for the film.

For a film this old, you'd expect some type of whir, hum, rattle, hiss, snap, pop, crackle, groan, or any other sign of age, but there is not a single bit of that to be found here, which is spectacular. Explosions don't have a ton of power, but they are significantly stronger than I expected them to be, while dialogue is fantastically clear and crisp, sharp as a tack. The string accompaniment for the Barber character was amazingly clear in its whimsical melody, though range was somewhat restrained.

I caught a couple lines that sounded digital, just awkward, that could have been better, but my experience with this track was definitely a positive one. 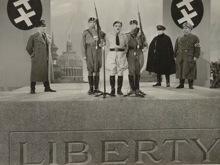 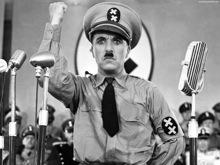 'The Great Dictator' is great. Few words sum it up with so few letters. Charlie Chaplin, legend of cinema that he is, puts on quite a show in his first talking role (or two), playing opposite leads in a story that openly mocks the European political climate of the era, yet doesn't feel trapped or aged in doing so. One of the greatest works from one of the world's greatest actor/directors of all time. Criterion has made the Blu-ray debut of the film a great success, with smashing audio and video, and a wealth of extras that are actually quite good and entertaining. I can't recommend this release enough!

Sale Price 25.73
List Price 39.95
Buy Now
3rd Party 25.73
In Stock.
See what people are saying about this story or others
See Comments in Forum
Previous Next
Pre-Orders
Tomorrow's latest releases