The crew of the colony ship Covenant, bound for a remote planet on the far side of the galaxy, discovers what they think is an unchartered paradise, but is actually a dark, dangerous world. When they uncover a terrifying threat beyond their imagination, they must attempt a harrowing escape.

Essentially abandoning the ridiculous, sophomoric pseudo-philosophizing of Prometheus, Ridley Scott returns to direct the sequel to that ambitious but ultimately bloated prequel in Alien: Covenant, a title that even comes across as somewhat apologetic by evoking the original 1979 classic. In fact, Jerry Goldsmith's creepily thematic score is repurposed in this production as a haunting motif suggesting the direction of this particular script. The filmmakers are correcting the disastrous collision course of the previous installment and are finally steering it on track to dock with the familiar, much-preferred storyline that introduced moviegoers to the lethal Xenomorph monster and the iconic heroine Ellen Ripley. This again is where the title change plays a significant role, as the plot feels more like a return to the franchise's traditional horror thriller roots rather than some absurdly heavy-handed pursuit for humanity's creator. By no means is this a great film. However, it is good filmmaking that vastly improves on its predecessor by simply being entertaining while adding an arguably satisfying twist to the alien's genesis.

Of course, this will be disputed among those who appreciated the lofty goals of Jon Spaihts and Damon Lindelof's screenplay, likely feeling betrayed by a sequel that basically asks viewers to pretty much scrap the events of the first movie. And in many ways, it does. Rather than continuing on Elizabeth Shaw's obsessed spiritual quest with the coldly indifferent android David (Michael Fassbender), fans are made to focus on the crew of the Covenant en route to colonize the remote habitable planet Origae-6. And this is one of the better aspects because these aren't scientists gloating their particular area of study while making really stupid mistakes. They are the ship's crew, regular people with believable faults, with only one responsibility but sidetracked with investigating a faint distress call, a decision made by the visibly afflicted first mate Chris Oram (Billy Crudup), the new captain after an accident killed his predecessor. This generates tensions with the rest, especially the newly widowed Janet Daniels (Katherine Waterston). Stupidity abounds, for sure, which is an inherent necessity for horror, but at least, it's not caused by people who should know better. 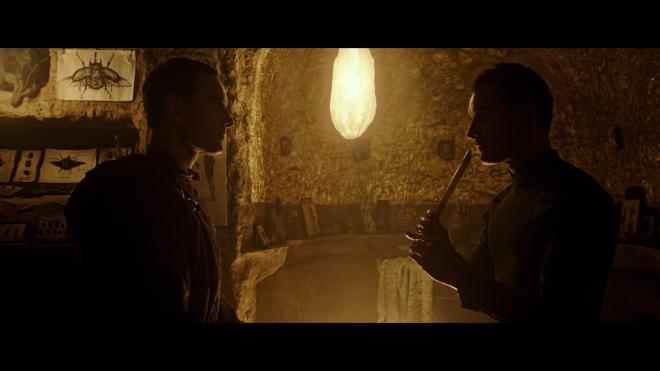 Granted, a few are experts of something, but their shared undertaking unites them to a more poignant purpose, one that's been impeded by a neutrino burst, damaging the ship and risking the lives of over two thousand colonists. This is what leads them to explore a remote but potentially habitable alternative. The whole thing feels vaguely familiar, as though audiences have taken similar steps towards to a horrible doom some thirty-eight years ago. Only, the filmmakers have added the awkwardly mawkish device of making the entire crew married to one another, which feels both clumsily forced and cheap to gain sympathies as well as unnecessarily weird. It works at giving the cast the opportunity to overact when spouses begin to die one at a time, but leaves viewers out in the cold. The same can be said of Fassbender playing dual roles as androids: the original David and the newer model with slightly less autonomy, Walter. It's interesting to watch the award-winning actor interact and play opposite himself, but at the same time, it can feel heedlessly weighty and a bit dull, as though conceived solely for Walter learning to play the Prometheus theme on the flute.

On the other hand, at least the interaction between the two androids leads to something more impactful than their human counterparts, who ultimately serve no other purpose than be fodder. Whereas David's sinister machinations were more implied and suspicious, in Alien: Covenant, the filmmakers make it apparent with his involvement within the franchise's history more shocking, much to the disgruntled moans of some, I'm sure. But the success of this new installment is a return to a classic atmospheric approach to the story, slowly building the suspense and leaving much of what the colonists will discover a complete mystery. The photography of Dariusz Wolski (The Martian, Pirates of the Caribbean series) bathes the entire screen with a gloomy, dispassionate feel that complements Scott's direction, keeping the action tense and effective. Distancing itself further from the first prequel, the film is significantly more violent and gorier, relying more on scares than nonsensical moralizing outside of David and Walter. And this is sure to please horror-hounds, a return to the franchise's genre roots, keeping the plot simple as a straightforward creature-feature.

20th Century Fox Home Entertainment brings Alien: Covenant to Blu-ray as a two-disc combo pack with a flyer for a Digital HD Copy, which can be redeemed via FoxRedeem.com but only available in HD SDR and HDX on VUDU. The Region A locked, BD50 disc sits opposite a DVD-9 copy inside a blue eco-vortex keepcase with a glossy slipcover. After skipping several previews, viewers are taken to an interactive menu screen with full-motion clips and music.

The Ridley Scott sequel sets forth on a dangerous expedition of Blu-ray with an impressive, reference-quality 1080p/AVC MPEG-4 encode, featuring a darkly atmospheric palette that looks beautiful.

Cinematographer Dariusz Wolski shot the entire film digitally but stylized it in such a way as to give it a creepy textured quality, layering much of the movie in pitch-black shadows that penetrate deep into the screen. Brightness levels are one of the more impressive aspects, delivering rich, inky blacks that never engulf the finer details in the darkest portions of the screen and maintain superb gradational differences during many poorly-lit sequences, adding depth and distance in every shot. Viewers can plainly make out the stitching and threading in the uniforms, and the surrounding foliage is continuously distinct from a distance. The lettering on computer monitors and walls is legible even during many wide shots while the tiniest detail on the surface of the spaceship is striking and detailed. Although complexions deliberately seem pale and sometimes pasty, faces remain natural and highly revealing, exposing every pore and blemish in the entire cast.

Contrast is also heavily subdued and controlled, giving the entire 2.40:1 image an emotionless grayish and dispirited tone that perfectly suits the planet's downcast environment. Thankfully, whites remain crisp and vibrant with excellent distinction and clarity in the various light fixtures without blooming. As would be expected, colors are greatly affected by the filmmakers' stylized intentions, noticeably limiting the secondary hues to toned down earth tones and the usual teal-orange palette with most of the video's colorful pop coming from the orange, green and blue lit computer monitors. Nevertheless, primaries remain accurate and well-saturated, particularly the blue sky of the planet and the crimson red blood of various bodies.

The sci-fi horror flick blasts onto screens with a splendid, demo-worthy DTS-HD Master Audio 7.1 soundtrack that continuously immerses the listener and pulls them into this dark, creepy world of Xenomorphs. While aboard the Covenant ship, the digital beeps from the computers are heard in the background and the hollow metallic pings echo all around with superb directionality. While exploring the planet, the surrounds suddenly grow silent, which is intentional and eerily effective, but the wind and thunder storm are occasionally heard to remind viewers of the potentially hostile conditions of the planet while thunder roars overhead.

For a majority of the runtime, the design is incredibly subtle but very well done and incredibly satisfying while tensions slowly escalate and the screen suddenly erupts into action-mode. While the mix of familiar musical motifs and Jed Kurzel's new score fill the entire soundstage with minor bleeds into the sides, imaging continuously feels expansive and spacious. Various effects travel flawlessly with discrete accuracy between the channels and off-screen, providing the visuals with an outstanding sense of space and maintaining extraordinary crystal-clear clarity during the loudest, ear-piercing segments. The dialogue and constant yelling are never drowned out by all the ruckus, and the low-end delivers a powerful, hearty rumble to the of spaceships' engines and the explosions.

Audio Commentary: In a rather dry and monotone voice, director Ridley Scott shares his thoughts on the movie, its place in the franchise, the stylized visuals and his creative decisions.

Master Class: Ridley Scott (HD, 56 min): Ignoring the somewhat misleading title, this hour-long documentary is actually an in-depth look at the making of the film and broken into four parts that can be watched separately (Story, Characters, Setting and Creatures). Featuring a host of cast & crew interviews interspersed with tons of BTS footage, viewers can learn a great deal on the director's creative style and approach to the plot, the characters, the visual effects and the shooting location.

USCSS Covenant (HD, 17 min): Three more individual pieces that work as a faux advertisement for the latest android models, a roundtable discussion, or found-footage of the crew before cryo-sleep.

Sector 87 - Planet 4 (HD): Three segments providing some exposition and background to the plot.

As though finally correcting the disastrous collision course Prometheus was heading, director Ridley Scott steers Alien: Covenant back on track to dock with the familiar, much-preferred storyline introduced in the original 1979 classic. Although still loosely connected to its predecessor, it essentially abandons the bloated ambitions of the first movie and returns to the franchise's traditional horror thriller roots. It's not a particularly good movie, but it's well made and entertaining enough to deliver a few gory thrills. The Blu-ray lands with a reference-quality audio and video presentation that's heavily stylized and effectively subtle. With a healthy selection of supplements for fans to enjoy, the overall package is recommended for fans, but the skeptics might want to give it a rent before deciding on a purchase.

Sale Price 7.73
List Price 19.99
Buy Now
3rd Party 10.98
In Stock.
See what people are saying about this story or others
See Comments in Forum
Previous Next
Pre-Orders
Tomorrow's latest releases